Members of The South Resists or Al Janub Yuwajeh, an independent secular group recently launched in South Lebanon ahead of the May 15 legislative elections, are determined to fight off intimidation and online bullying to try to shift public opinion in South Lebanon. 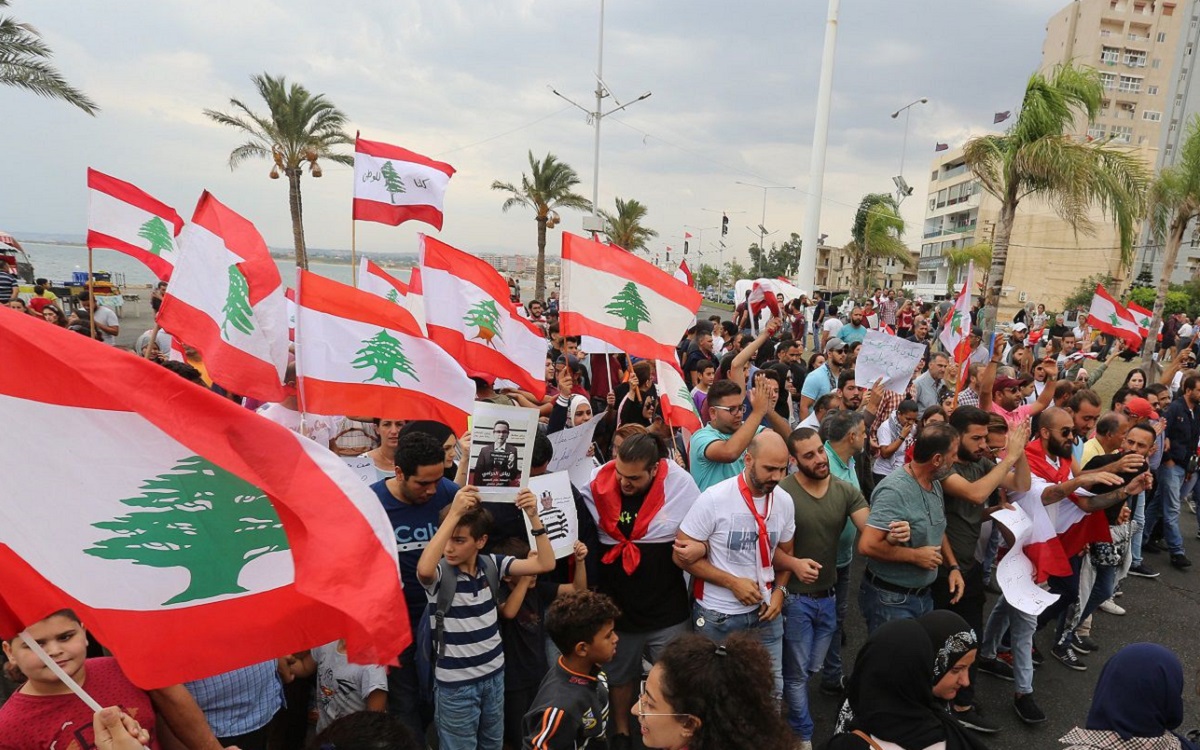 Members of the Secular Club at an event in Tyre, South Lebanon. Photo: Courtesy of Soltan Husseini.

The young members of the Secular Clubs in South Lebanon launched this campaign to push voters to reconsider their allegiance to the establishment parties and explore new options, Soltan Husseini, president of the Secular Club in Tyre, told NOW.

“We know how alienated the south is due to the political dominance Amal and Hezbollah exercise. So for us, it was time to create a strong unity throughout the south that would fight them electorally,” Husseini said.

But the activists do not expect it to be a smooth campaign.

The major Shiite electoral strongholds of the Amal Movement and Hezbollah have controlled South Lebanon since the end of the Israeli occupation, in 2000. The duo’s popularity in the Shiite-dominated region grew exponentially after the civil war, when their networks of clientelism expanded. Hezbollah, for example, operates 23 schools, five hospitals, and numerous businesses and charities.

The southern Secular Clubs are part of Mada Network, a student-led political network of Secular Clubs in universities across Lebanon. Several clubs from the network have launched the electoral campaign for their lists running in the May 15 elections, covering several regions in Lebanon, including Beirut.

The clubs in Tyre, Sidon, and Nabatieh united their efforts behind the Al Janub Yuwajeh secular and independent list of candidates. So far, only one person is running on that list, said Husseini, a 21-year-old political science student from Tyre. The campaign has been focused on getting the message of secularism across to the electorate in South Lebanon via social media.

But even on social media, the backlash from Hezbollah and Amal supporters was intense. Husseini said they expected this backlash, especially after the clashes and intimidation the October 17 protesters were met with in South Lebanon by supporters of the two groups.

“We know that neither the public nor the government will protect us, but at least everything is being made public so the people can assess and decide for themselves,” Husseini said.

After the 2006 war in Lebanon, Hezbollah oversaw the reconstruction process in the south and partnered with several international relief agencies and reconstruction donors.

Political observers have pointed out that in the last two rounds of municipal elections, the Party of God carefully chose candidates from well-known local families that have played a significant role in the reconstruction process, which helped them score victories across the southern region.

In the 2018 parliamentary elections, Hezbollah and Amal were the biggest winners, along with their allies, with 13 and 15 out of 128 seats won respectively.

A candidate that ran against the duo, journalist Ali Al Amin, was assaulted by a group of men in his southern hometown of Shaqra. According to Al Amin, dozens of men approached him as he was hanging up a picture of himself in his street, and demanded he take it down.

In another incident, Shiite Sheikh Abbas Al Jawhari said that he was unable to run for parliamentary elections due to smear campaigns run by Hezbollah and Amal that allegedly fabricated accusations against the sheikh that resulted in his incarceration.

A secular state and citizen freedoms

The campaign was first introduced through a seminar held in Sidon, followed by a conference in Tyre, where they introduced one candidate and the first draft of their political program.

According to Husseini, the political program is not available online. It will be released through social media platforms as part of their social media campaign. For now, it exists as a political paper put together by the presidents of the three secular clubs.

On a political level, the campaign aimed for a secular state. This applied to all public institutions and personal status laws. Thus, people would enjoy the same rights and opportunities, without the need to rely on a sectarian quota that they believed “had racist and discriminatory repercussions, for it limited people’s rights according to their sects and discriminated against marginalized groups, especially women.”

For the economy, the group focuses on limiting the crisis by wealth redistribution to fulfill people’s basic needs, especially the poor.

“By performing audits on the wealthiest, like the banks and the 1 percent richest, we then limit their access to this wealth and use it to create a network of social services like accessible healthcare and educational systems for all,” Husseini said.

The campaign also advocates for a comprehensive fair capital control law, a new taxation system that would benefit the poor, subsidizing basic needs such as food, housing, and healthcare, plus taking serious steps to audit the central bank’s accounts.

“After performing a fair redistribution of wealth, we believe that a wealth tax should ensue where the rich get taxed more in order to alleviate the economic pressure from the poor,” Husseini stated.

For handling foreign affairs, the program highlights the importance of strengthening the relationships with the Arab world and for opening new lines of communication with the West and the East. Eventually, the program says, these steps would help the people regain power in governmental decisions.

After performing a fair redistribution of wealth, we believe that a wealth tax should ensue where the rich get taxed more in order to alleviate the economic pressure from the poor.

On a security level, the campaign states in its program that it was the government’s responsibility to manage the country’s internal security, any outposts or security groupings were “completely rejected.”

The group believes in the necessity to protect all citizens’ rights and freedoms, including freedom of thought and freedom of speech. They suggest a security policy that “protects the cultural and artistic fields from military and security interference in the interest of all authorities, political, religious, and others.”

Lastly, the program supports the draft law on the independence of the judiciary proposed by the Legal Agenda and the Judicial Independence Coalition.

The campaign doesn’t have an internal structure. Instead, it gives all southern secular clubs the freedom to form their own coalitions and lists. Once finalized, any list formed that agrees with the campaign’s values and policies automatically becomes part of Al Janub Yuwajeh and can freely adopt the name to promote itself.

“The campaign is here to serve the candidates and the coalitions. We are here to help if they need any help electorally. The presidents of the secular clubs across the south are the ones responsible to conduct discussions and meetings with candidates and opposition groups to ensure we have the largest unity possible in the south,” he said.

The process of vetting candidates was still ongoing when we interviewed Husseini. He said that they were currently having discussions with opposition groups to study potential lists, but the process was being slowed by the threats to those who join the fight against Amal and Hezbollah.

Husseini explained that while many young people in South Lebanon are showing excitement to join the campaign, many were also hesitant in fear of potential attacks. Examples are not hard to find.

Lebanese University philosophy professor Bassel Saleh, originally from Kfarshouba, a vocal supporter of the campaign, has experienced a massive backlash by Hezbollah’s supporters. Some dismissed the campaign’s validity saying “no one in Hezbollah has time for you guys,” one Twitter user said.

Others accused Saleh of being a “traitor” and a “spy” being paid by “embassies”, especially after he authored several articles on independent online media outlets calling out the attacks and threats.

“A traitor and a spy’s fate is death, it is a known rule,” one user tweeted in response to Bassel’s articles.

Some of the threats against Bassel went beyond the virtual sphere, where a person allegedly leaked Saleh’s workplace, which is not mentioned online, “and promised to fulfill his threat with complete disregard to any legal repercussions,” the professor wrote in an online statement.

According to Husseini, this type of attack against any dissent became the rule after Hezbollah’s war with Israel in 2006.

“After the war, Hezbollah took advantage of his win to silence the opposition. It got to the point where they see us [the opposition] as enemies and a Hezbollah official, Ibrahim Amin Al Sayyed, even said that these upcoming elections will be another version of the 2006 war, but on a political level”,” he said.

In 2015, Hezbollah’s Secretary-General, Hassan Nasrallah, slammed those criticizing him for fighting in Syria and Iraq, saying, “anyone who says other than what is said here is a moron, is blind and a traitor. The Shiites of the American Embassy are traitors, agents, and morons.”

Later on, after the 2019 uprising, Husseini said that the narrative reappeared against Shiite protesters. They were called “The [US] Embassy Shiites” or agents of the US Embassy. Some analysts believe that once this label has been branded onto a group of people by a strong force, such as Hezbollah, it becomes difficult to shake the stigma given the social, political, and psychological structures it touches.

However, Husseini said, it was still difficult for them to recruit candidates in these conditions.
For the campaign’s team, this intimidation was nothing new. During the October 17 revolution, protestors in Tyre were attacked by Amal supporters, and protesters in Bint Jbeil were attacked by Hezbollah supporters.

He argues that the most important factor that protects the campaign is their transparency and their faith in the political work they’re following – that is free of political affiliations and “embassy funds.”

“Right now, we want the people to help us with logistics for our future conferences and for members to join us on the streets even if it’s dangerous, we want to find these people,” Husseini said.

However, he adds that there is one more thing to watch out for: infiltrators.

“Big brother is watching you”

During the vetting process, Husseini observed suspicious behavior from a few potential candidates and those who pretended to be on the opposition’s side.

“This is a tactic the political duo is using to control us from the inside. The infiltrators usually have nothing in common with us and their behavior is easily noticeable,” Husseini said.

Some factors to be on the lookout for, Husseini explained, is their reactions to controversial topics when making big decisions, like the issue of Hezbollah’s arms.

“You suddenly feel like they’re reverting back to their original, pro-Hezbollah stance when things like this are talked about,” the student said.

But he considered these hurdles to be typical from a region that he believed was strategically transformed into Hezbollah and Amal’s “safe space” where no opposition disturbed their reign.

According to Husseini, the campaign’s goal was to create an opposition that did not compromise and remained assertive in its decisions, saying, “whatever we say, we stick to it.”

“They [the infiltrators] try to act normal but we know who they are, but this definitely complicates the vetting process,” he stated.