Of voting, record-breaking turnout, fighting at the polls, being unable to vote, and conflict of interest in monitoring the election. The weekly roundup from Lebanon. 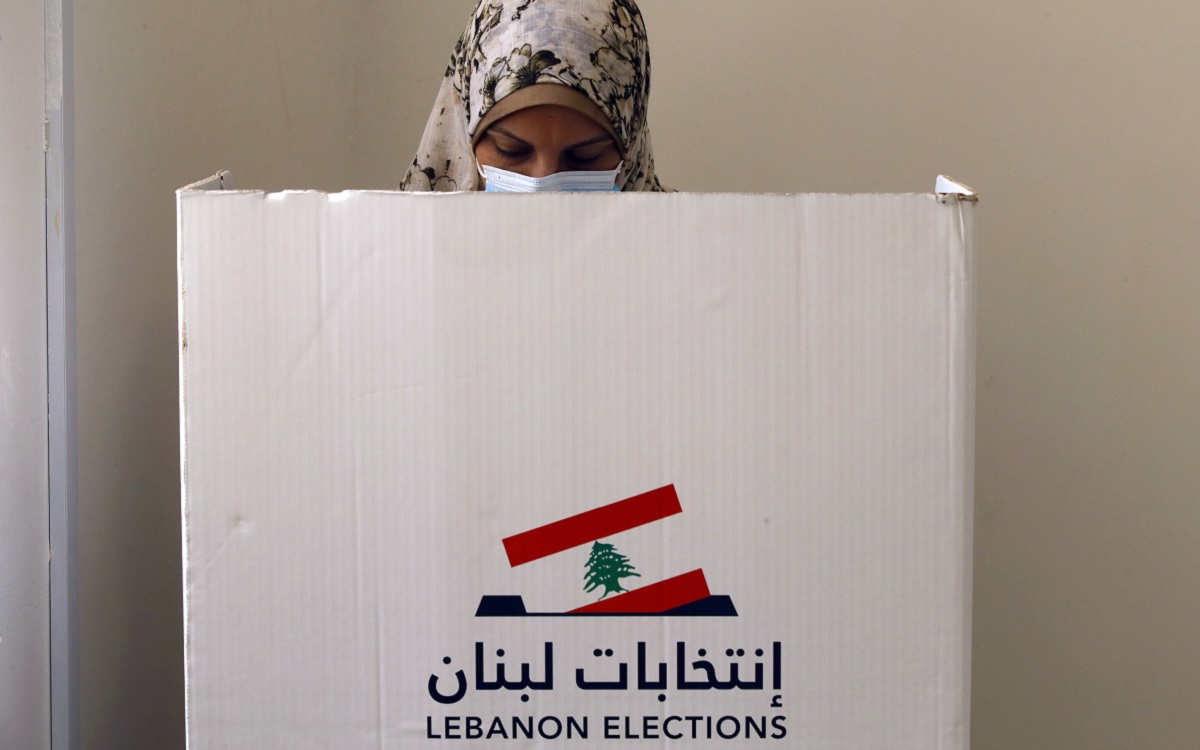 When Lebanon’s diaspora went to the polls in droves this past weekend, everyone at home collectively held their breath.

Between two days of voting, May 6 and May 8, the Ministry of Interior has estimated that around 60 percent of Lebanese who registered to vote abroad actually cast their ballots, a massive increase from the previous election.

But despite the large turnout by the diaspora, celebration may be premature.

Some Lebanese, at home and abroad have hailed the diaspora vote as a success for the opposition and a possibility that the anti-establishment secular groups that formed lists of candidates may earn seats in the parliament and influence legislation and policy in the next four years.

The diaspora’s voting is bringing hope!
An affirmation of “Yes, we can change”

Hopefully the message will be echoed in #Lebanon this weekend!

Because, yes we can and we have the power to change! #انتخابات_2022#إنتخابات_المغتربين

The fact that 130,000 or so in the diaspora voted is, without a doubt, a positive sign that the Lebanese people are fired up to be involved in the political process and want a say in the future of their country. But it is too soon to tell just what these results will yield.

There were plenty of people who said that they were voting for change, but there were also a number of videos and photographs circulating on social media that showed people who continue to support the old establishment politicians.

Some of the opposition candidates and parties worked hard to connect with the diaspora and encourage them to vote for this so-called change that they are campaigning, but the establishment parties have also been doing this for a long time.

They have their own networks all over the world who will vote for them through thick and thin, campaign for them, and pressure others to do the same.

There is also the issue of the blank ballots.

From those who voted, how many decided that they do not have faith in anyone running, establishment and opposition alike, and ultimately voted blank?

Approach with cautious optimism, or else risk major disappointment.

The diaspora votes: During the 2018 election, around 83,000 Lebanese expatriates registered to vote, but only around 46,000 actually participated.

That number nearly tripled for the 2022 election.

According to the Ministry of Interior, out of the 225,114 in the diaspora who registered to vote, close to 130,000 actually cast their ballots, around 60 percent of the registered voters.

The vote began on Friday for those living in countries that do not have workdays on Friday, primarily in Arab countries, and saw about 16,000 of the registered 31,000 voters, setting the mood for what was to come on Sunday when the rest of the diaspora voted.

Rushing to vote: The United Arab Emirates saw one of the highest turnouts of voters, with over 70 percent of Lebanese casting ballots.

In Dubai, Lebanese who arrived at the airport on the day of the vote went straight to the voting center and left their baggage at the door rather than risk missing the opportunity to vote.

Video of Lebanese voters in Dubai apparently arriving from the airport, leaving their baggage at the entrance of polling center and running in to make it in time.

UAE has one of the highest turnouts of #Lebanon’s expat vote.#إنتخابات_المغتربين pic.twitter.com/QzcdkGTuio

Also in Dubai, the line to vote stretched well over 1.5 kilometers as Lebanese braved the 45-degree heat, determined to make sure that their voices were heard.

The same was seen in other parts of the world, such as in New York City where the line made up of eager votes twisted and turned through the streets.

Conflict at the polls: But it was not all rainbows and butterflies at some of the voting centers.

Tensions remain high between voters supporting the opposition candidates and those who continue to support the establishment.

In France, there was a confrontation between a supporter of President Michel Aoun’s Free Patriotic Movement and an anti-establishment voter at a Paris voting center.

In the video, the anti-establishment supporter shouts at the FPM voter, telling him that they “led the country to collapse” and that they should be ashamed of themselves.

Germany also saw its share of conflict.A group of supporters of Speaker of Parliament Nahib Berri’s Amal Movement gathered in front of the Berlin voting center as voters continued to enter the Lebanese consulate.

The Amal supporters were soon asked to move away from the polling station but refused, claiming that they had a permit from the German authorities to be there.

The confrontation was recorded by electoral observers in Germany and Lebanon. Whether or not there will be any consequences remains to be seen.

Unable to vote: While many in the Lebanese diaspora said that they were able to vote without any problems, that was not the case everywhere.

In Angola, Lebanon’s Honorary Consul was unable to vote despite having registered.

Other Lebanese residents of Angola also complained about this issue.

So um, the Lebanese Honorary Consul in Angola was not allowed to vote in Angola, because his name was not on the list despite registering to vote.

Other expatriates in Angola have also complained about this. https://t.co/88H7SH1crT

Voting turnout in Africa was some of the lowest globally, with around 49 percent of registered voters ultimately casting their ballots.

Conflict of interest: Having free and fair elections is a very important aspect of maintaining a functioning and thriving democracy.

That is why having monitors to ensure that the election is devoid of interference and any potential irregularities is necessary.

Lebanon decided to take this in a different direction.

For the diaspora, the voting was monitored by screens donated by a business partner of Parliamentary Speaker Nabih Berri, who is running for reelection.

In addition to this, the logistics room in Lebanon is going to receive power from infamous owners of generators, some of whom, also, are running in the election.

In tonight’s episode of 🇱🇧 surreal news, diaspora voting will be monitored by screens donated by the business partner of Speaker of Parliament (who is running for elections), while the logistics room will be powered by the owners of generators, also running for elections. pic.twitter.com/MOherAxqt4

So far, no major irregularities or accusations of fraud have been made, but the Lebanese people are concerned that some might take place, especially as the votes are en route to the Central Bank, where they will be stored until May 15 when the national vote takes place.

Who to vote for: This year’s election in Lebanon is a lot of things.

It is going to help determine what the future of the country might look like, and possibly being to shift the balance of power and much more.

But it is also competitive.

By the time applications closed, there were over 1,000 candidates running in this election and, after the lists were finalized, there were 103 lists in the 15 districts of Lebanon.

So it can be hard to decide who to vote for, especially when the opposition is so divided, and there are multiple “change” lists running in most districts.

NOW decided to make it a little easier for you to figure out who you should vote for, and who best represents you in your district.

With the Political Colors of Lebanon, NOW gathered social scientists, journalists, coders and designers to look at the speeches and public debate to help simplify where different candidates and parties land on the political spectrum.

Podcasts: Ronnie Chatah is keeping with the election theme and having a very busy week on the Beirut Banyan, with seven new episodes in the run up to election day. The first episode comes out today, in which Chatah speaks with retired General Khalil Helou, who is running in Baabda. Next, on May 10, is Sarah Yassine who was a candidate for Beirut Madinati in the Beirut II district until they pulled their list. Then, on May 11, Ronnie speaks with two candidates from Citizens in a State, Mounir Doumani, running in Tripoli, and Petra Sahama, running in Zgharta, as well as Rayan Charara, a member of MMFD. On May 13, Chatah sits down with Fouad Makhzoumi, candidate for the Beirut II district.

Sarde after dinner seems to have caught election fever as well as they, for the second week, continue to discuss the upcoming elections, their speculations and take a slight detour to discuss the ongoing Amber Heard-Johnny Depp trial in the US.

The Lebanese Politics Podcast is also breaking down the elections for listeners with the latest episode seeing Ben Redd and Nizar Hassan looking at the rhetoric coming from the candidates and parties running in the election, paying particular attention to what they claim are central problems and what the solutions might be.

Also, if you are Lebanese over the age of 21 and in Lebanon, do not forget to cast your ballot this Sunday, May 15, and make your voices heard.