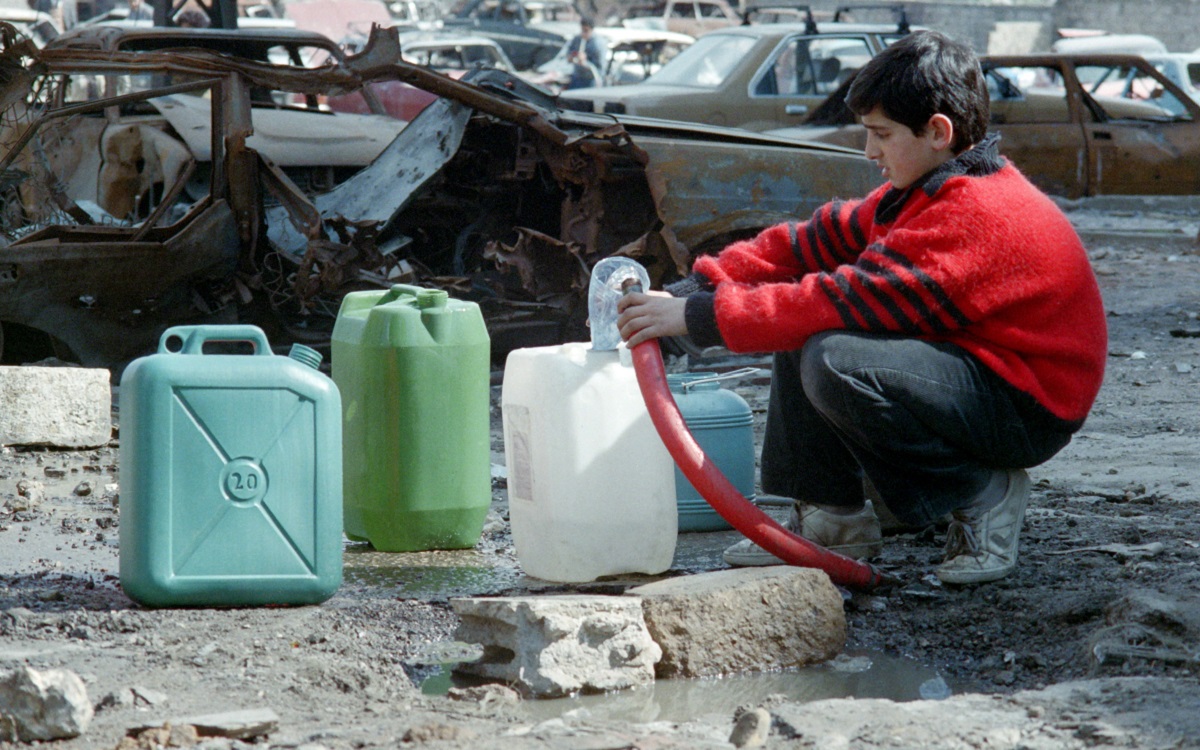 A Lebanese boy fills up jerrycans with water in front of a destroyed car, in Christian Ain El-Remmaneh district, on February 28, 1990 in East Beirut, during the battle between rival Christian factions. Photo: Joseph Barrak and Rabih Moghrabi, AFP.

Endless wires of electricity tossed precariously over streets from balcony to balcony, wrapped around remnants of dangling dawle electricity poles. Some were privately delivered, others were stolen and connected to smaller businesses and homes.

Most were snipped and removed in the post-war years, with seasons of digging and drilling beneath the pavement.

Meanwhile, the wartime kingpins of illegal power supply were left in place and encouraged to conglomerate into neighborhood mafia-like distributors. The central government supplied just enough public utility without ending the generator’s daily role in our lives.

As for our local municipality? It continued taxing us with (mis)management. A required rental fee here, a purchasing percentage there, without any indication of where all that money went.

The lira skyrocketed from 2 LBP to the dollar pre-civil war to 3,000 LBP just after, before stabilizing and floating at the 1,500 LBP exchange rate, with a guarantee by local banks that dollars were convertible and safe. Interest rates unknown to The Cayman Islands or Zimbabwe, reaching double-digit figures that persuaded us to lock ourselves for five years. Platinum credit cards and gifts were granted, and a Central Bank governor devised financial derivatives, allowing us to hold on…

Until 2019. Before the financial collapse, when the dollar turned to lollar and lira to laughter at the current 20,000 LL exchange rate.

Years of trimming down sidewalk space forced pedestrians to walk between curbside poles, a poorly designed system to physically prevent cars from illegal parking (rather than enforce the law).

Until 2019. Before the financial collapse, when the dollar turned to lollar and lira to laughter at the current 20,000 LL exchange rate.

The ugliest of brush-sized trees were planted and zoning rules thrown away to profit over the plundering of a once-planned city. Towers of monstrosities were permitted on the corniche, their illegal heights built to the water’s edge, blocking our shared view of endless shades of blue that once blended sky to the Mediterranean.

We used to swim in a tranquil sea, without fear of skin rash or health consequences. There were no trash mountains growing, serving as temporary turned permanent landfills alongside the coast, piled with overflowing waste and floating sewage leaking from cracked drains. No illegal seaside hotels blocked the area that now turns Ramlet el Bayda green and Beirut’s streets into seasonal flood zones.

Older neighborhoods were designated as Traditional Quarters while mid-century architectural masterpieces within them were torn down  in favor of Gulf-styled skyscrapers, not so ‘traditional’ in the end. A blind eye was turned to heritage that survived fifteen years of civil war being suddenly knocked down, overnight, for transactions that warped our historic dream palace into a nightmare.

City parks were razed in favor of more construction. Tens of thousands of empty apartments in Beirut represented a culmination of luxury real estate investments for banks, wealthier tourists and part-time expats that redesigned us as Dubai’s uglier twin.

Our natural retreat from the coast’s congestion and the summer heat was blocked by built-up mountains resembling urban sprawl rather than natural terrain, and unchecked quarrying destroying Mount Lebanon’s majestic landscape

Lacking parking lots to limit car use, our smaller streets turned into major thoroughfares, carbon fumes reddening our horizon. An attempt at metered parking grew ineffective with valet service companies that double-parked – at times triple – and blocked law-abiding car owners. The derelict Charles Helou station was abandoned, without thought for renewed public transport, leaving student architects and activists yearning to redesign the tramlines that once encompassed the city.

Joining the coast with the mountain for commuting, the train…impossible to imagine now, resumed operations just after the civil war. It was limited in distance, operating along the coast from Dawra to Jbeil only, but it was running. No investment to ease congestion, the remnants of a rail network that built modern Lebanon were paved over by the mid-1990s with expanding roads and developed by real estate adventures. Sections remain visible today, in empty patches linking cities. As for Beirut’s Mar Mikhael train station…its rooftop was shattered and the platform currently used by the Train Station night club, feeding into a Ministry of Public Works bus cemetery.

A private company, Solidère, was tasked to manage public space. Many economic calculations were granted to Rafik Hariri under Hafez and Bashar Al-Assad’s reign. Impossible to know if the municipality would have done a better job had it retained full control – the rest of Beirut provides a bleak comparison.

The wider community’s role was limited to dialogue through local committees – the majority of those concerns were eventually tossed aside, making downtown inaccessible to anyone who could not afford boutique prices.

Regardless, Solidère was given the role of bringing war-torn downtown Beirut back to life. Rebuilding (more than restoring) the Green Line that divided and destroyed Beirut. Focused on profit over public desire, the company allotted shares to original property owners and devised the longest-running and most expensive reconstruction project of all time.

The wider community’s role was limited to dialogue through local committees – the majority of those concerns were eventually tossed aside, making downtown inaccessible to anyone who could not afford boutique prices.

A particular and irreversible tragedy scarred the most important of public squares – Martyrs Square – leveled to the ground. Its history is still intact with the statue surviving snipers and rocket fire, but our historic and pre-war bustling city center – the beating heart of Beirut – has fallen to silence.

A hollowed city center…that is, until crises resurface.

Rounds of demonstrations. Revolutionary demands. Fifteen years after the civil war’s end, with widespread calls for the Syrian army to leave Lebanon. Sovereignty, independence, reclaiming our history and reform. A movement that was quickly murdered by Syria’s staunch ally – Iran’s preferred proxy.

Firing one airport security official brought us to the brink of civil war in May 2008. Electoral wins were tossed aside in favor of a forced ‘national unity government’ borne from a paralyzing Doha agreement. Over a decade later, a national reawakening reimagined our post-war disorder. From Tripoli to Nabatieh, and Bcharre (and Beirut) in-between. All means all spared no political figure in sight. Like March 14,  October 17 was muted by proxy, albeit this time with the support of its collateral-turned-status-quo regime.

Leadership cannot be held to account. Politicians hold no responsibility over the country’s fate. Remnants of the worst years of fighting are on full display.

Bread is unavailable, basic medicines are nearly out of stock. We wait in the longest of lines that mirror the crippling 1980s.

From Tripoli to Nabatieh, and Bcharre (and Beirut) in-between. All means all spared no political figure in sight. Like March 14,  October 17 was muted by proxy, albeit this time with the support of its collateral-turned-status-quo regime.

Fuel has been stocked by criminal entrepreneurs and illegally stored. Anger and chaos in Akkar (and bullets fired towards a gas tank) burned over twenty to death. Subsidies persist despite repeat announcements of increased rates whimsically put on hold. Tampering with the ‘real’ market has made the ‘black’ one unbearable. The perennial proxy leader promises an oil tanker from his sponsor while the US ambassador looks to Jordanian electricity via the World Bank. Gallons of gas on scooters are zigzagging across Beirut, paid in premium fresh dollars by those in higher elevations who can afford their Faqra lifestyle.

The rest of us park in kilometer-long queues across the country, overnight, in hopes of filling a quarter tank in the morning, only to run the minimum of errands before returning to the same lines.

The wheat silos overlooking warehouses that were routinely inspected before the civil war by customs under state authority have become an example of our long-diminished sovereignty that was redefined, post-war, as curtailed oversight.

Just like the airport, indirectly monitored by Syrian mukhabarat for Assad regime enhancement, and later to the benefit of sub-state weaponry and Iran’s security needs. Warehouse #12 resembled a battlezone more than cargo, storing 2,700 tonnes of weapons-grade ammonium nitrate, siphoned off until just over 500 were left behind in the most reckless of conditions.

Bringing us to August 4, 2020. An explosion tore Beirut apart, killing well over 200 people. A death toll smaller in number and further damage spared due to the wheat silos’ location adjacent to the nitrate dump. The silos’ remnants today belong to a warzone. A massive blast happened in the middle of a nation’s political and economic breakdown, with a population holding on for a semblance of justice against despair.

Ronnie Chatah hosts The Beirut Banyan podcast, a series of storytelling episodes and long-form conversations that reflect on all that is modern Lebanese history. He also leads the WalkBeirut tour, a four-hour narration of Beirut’s rich and troubled past. He is on Facebook, Instagram, and Twitter @thebeirutbanyan.
The opinions expressed are those of the author only and do not necessarily reflect the views of NOW.