Iran’s first fuel shipment arrived in Lebanon, met with RPG celebratory fire and rose petals, but analysts argue that it will do little to alleviate Lebanon’s fuel crisis and only really serves to bolster Iran and Hezbollah’s images. 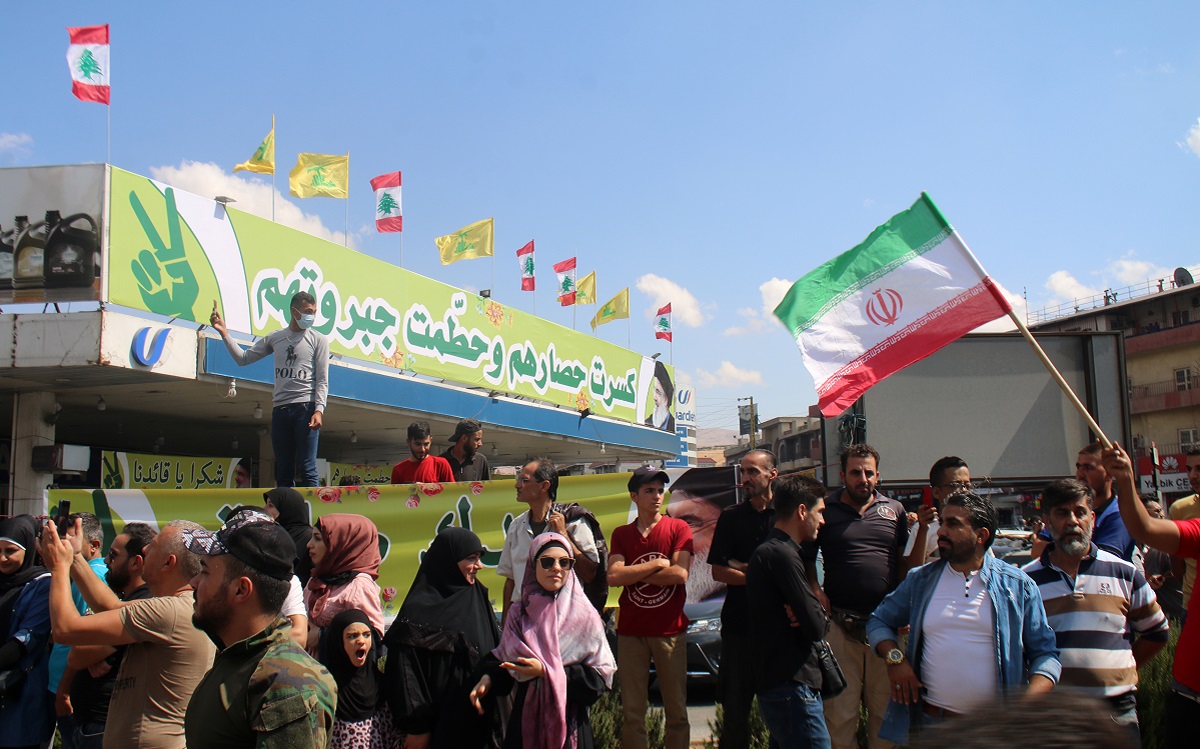 The sound of gunfire filled the air in celebration of the tankers of fuel that had crossed the Syrian border into Lebanon through routes used by smugglers to avoid international sanctions.

The first delivery of Iranian fuel that Hezbollah has been promising its constituents since June arrived in Lebanon on Thursday with hundreds of party supporters playing patriotic songs, distributing sweets, firing RPGs, waving Hezbollah flags, and throwing rose petals at the trucks as they drove into Baalbeck.

Hezbollah had instructed its supporters to cancel any festivities related to the event, but banners declaring victory over the “US blockade” appeared hours before the tankers arrived at the border. The Iran-backed group has framed Lebanon’s fuel crisis as a consequence of sanctions imposed by Western states and has called it a US blockade, despite the fact that it is the Lebanese government that is unable to afford to purchase the fuel.

Television stations affiliated with Hezbollah broadcasted the fuel tankers’ arrival live, applauding Hezbollah as “the savior that brought fuel to Lebanon to bring the country out of the crisis”.

However, analysts say that the fuel itself not only poses many problems in terms of international sanctions, it is also hardly a real solution to Lebanon’s energy problems. Hezbollah’s move can only count to boost its own image, which had to suffer in the past months, due to sectarian clashes between its supporters and other Lebanese groups, as well as an exchange of fire with Israel right on the anniversary of the Beirut blast, on August 4.

“This is certainly a political statement rather than a technical solution because if you want a technical solution, it cannot be done with one of the political parties,” Yehya Mawloud, chief operating officer of Middle East Power, the company that operates the Zouk and Jiyeh power plants on the Lebanese coast, told NOW. “It’s not the problem of importing two or three or four barges because it will not fix the problem. It will cover like 10 percent of the needed quantities. It won’t make a big difference.”

A move that weakens the state

Hezbollah’s Secretary-General Hassan Nasrallah first announced that Iran would be sending Lebanon fuel to aid with the crisis on June 8, but it was not until a speech on August 19 that Nasrallah confirmed that the fuel was on the way.

Then, on September 16 around 60 trucks carrying 50,000 barrels of fuel crossed into Lebanon from Syria with another 60 trucks expected to cross on Friday. In total, Tanker Tracker estimated that around 250,000 barrels were expected to be offloaded from the Iranian ship transporting the fuel.

According to Nasrallah, the decision to have the fuel arrive in Syria first was meant to help Lebanon avoid any issues with the US sanctions on Iran over the importing of fuel from the country.

“Our aim is not trade or profit,” he stated. “Our aim is to alleviate the suffering of the people.”

While Hezbollah has bolstered this Iranian fuel as something that will save Lebanon from its fuel crisis and portrayed the party as the only group taking action to ease people’s pains, Mawloud is skeptical about how much this fuel will really impact Lebanon’s ongoing fuel crisis.

He says that even if Iran was sending “eight barges or ten barges, this is a minimal number. It won’t last even for a month.”

It also fails to solve the wider political and economic issues plaguing the country, with Mawloud comparing the Iranian fuel to giving ibuprofen to a cancer patient.

“This is like a media campaign and it cannot be the solution for the country.”
Yehya Mawloud, energy expert

“Nothing significantly will be changed because we have a serious political problem, we have a serious economic problem,” he explained. “This is where you can’t look for any solution with this political class. They will not bring solutions. They are only trying to make the clientelist system in the best picture so that they can keep manipulating the mindsets of the citizens in Lebanon to vote for them again in the next elections. This is like a media campaign and it cannot be the solution for the country.”

He added that Hezbollah coordinating with Iran to import the fuel only serves to further push the relevant institutions to the side when they should be the ones in charge of the country’s resources.

Hezbollah’s importing of Iranian fuel also damages Lebanon’s sovereignty as the government was not involved in the process and the fuel was brought through an unofficial border crossing.

Hezbollah has long been criticized for its allegiance to Iran, with critics arguing that their subservience allows for Iran to interfere in Lebanon and expand its regional influence.

The fuel is no exception to this criticism, as the Lebanese government was left out of the decision as well as the logistics of bringing the fuel into Lebanon.

Instead, Hezbollah used the opportunity to create a savior image for itself with the party’s supporters making it clear to anyone watching who brought the much-needed fuel to Lebanon.

“The whole oil from Iran is based on a big lie. It’s all propaganda at the end of the day. Hezbollah will not be able to supply the [entire] market with Iranian oil,” Makram Rabah, lecturer in history at the American University of Beirut, told NOW.

The idea that Hezbollah was able to “break the US siege on Lebanon” is something that Rabah also believes rings hollow as the US, unofficially, approved the importing of Iranian fuel since it creates temporary stability in Lebanon.

“This is something that the US has sanctioned so, in a way, Iran is celebrating a victory which does not exist because, at the end of the day, this supposed victory was made through what they call the Great Satan, or the United States of America,” he argued.

“The West’s only concern at the moment is to prevent the collapse of the state and the real help that they are giving Lebanon is not through allowing Hezbollah to use these tankers or these trucks but rather to allow Jordanian [electricity] and Egyptian gas from reaching [Lebanon].”
Makram Rabah, History lecturer, AUB

While Hezbollah and Iran try to play this off as a win, similar to the US withdrawal from Afghanistan and the Taliban take over of the country during the process, in reality, it is a continuation of the status quo, which supports the West’s goal of maintaining stability in Lebanon.

“The West’s only concern at the moment is to prevent the collapse of the state and the real help that they are giving Lebanon is not through allowing Hezbollah to use these tankers or these trucks but rather to allow Jordanian [electricity] and Egyptian gas from reaching [Lebanon],” Rabah explained.

In the short term, this will help improve Hezbollah’s image amongst Lebanese as the fuel, no matter how little, will at least temporarily give a slight respite to the fuel crisis, which the group has been accused of contributing to by smuggling subsidized fuel from Lebanon to Syria.

“Certainly, this will affect them positively in the sense that people don’t really care where they get their fuel as long as they get fuel. But this will eventually die out and this is reverse smuggling in a way which is still smuggling,” Rabah stated. “Ultimately, they will try to manipulate and control the narrative.”

Although the Iranian fuel is being imported by Hezbollah through Syria, there are still concerns that some of the fuel will either be then smuggled back to Syria to be sold or that some of it will be siphoned while in transit to Lebanon.

“It’s a problem of wherever you get the fuel, it is ultimately being smuggled into Syria,” Rabah said. “And many of these black-market networks are connected to either Hezbollah or the rest of the political establishment. So what we are trying to do here is trying to fill up water in a broken bucket which is very stupid to do.”

Another barge containing fuel is expected to arrive to Syria in a few days, Hezbollah announced, and another two are on the way.

The offloaded fuel, according to Nasrallah, will be donated to various public institutions, such as hospitals, and the rest sold at a discounted price to private businesses through a Hezbollah-controlled company, Amana, which is also under US sanctions.