How we got played I

Lebanese political elites have always been united in defending their ruling status and often employed “divide and conquer” tactics among the Lebanese population to keep themselves in power. October 17 activist Mariam Kesserwan looks at how these tactics divided an opposition alliance after the August 4,2020 explosion. 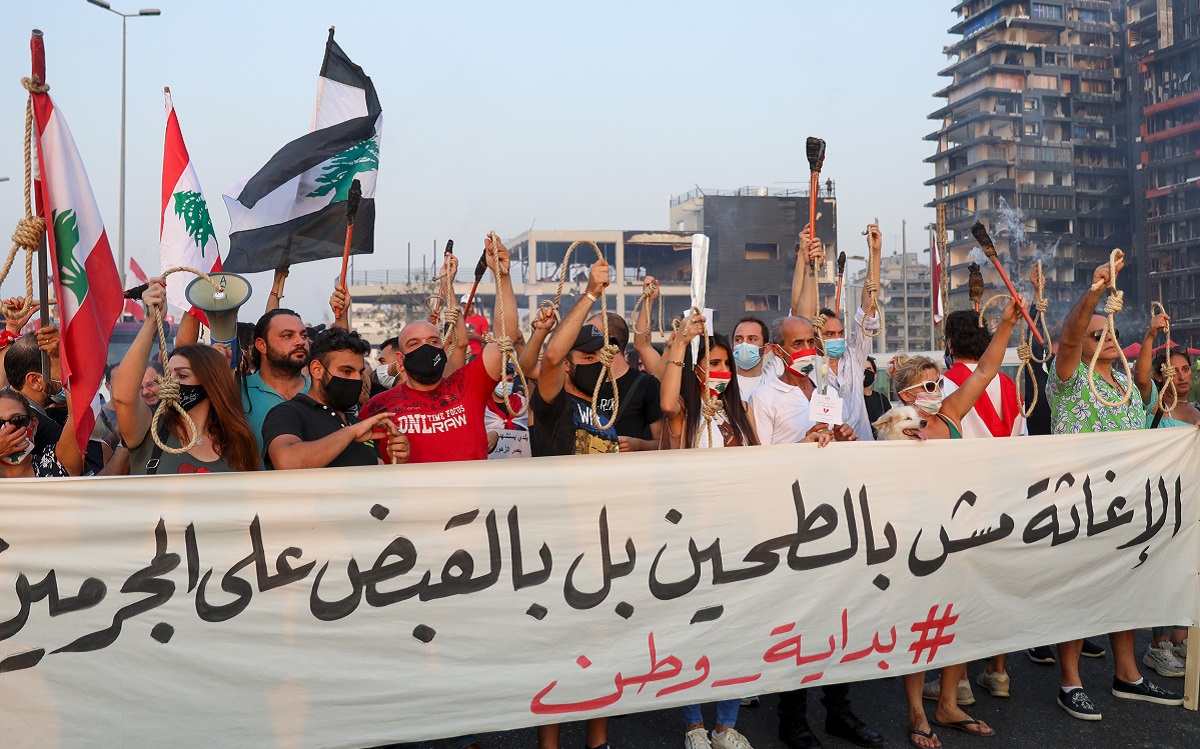 Lebanese demonstrators carry nooses during a demonstration to mark one month since the cataclysmic August 4 explosion that killed 191 people, at Beirut's port area in the Lebanese capital Beirut on September 4, 2020. The explosion piled on new misery for Lebanese already reeling from the coronavirus pandemic and the country's worst economic crisis in decades. As well as killing more than 190 people, the explosion injured at least 6,500 and left 300,000 homeless. Photo: Anwar Amro, AFP.

It is no secret that the Lebanese politicians are warlords ruling by bloodshed.

When the people revolted on October 17, they thought they had exposed their game. The people discovered the unity between the political players who, for decades, fermented divisions in the country to keep themselves in power.

One thing may seem difficult to both explain and comprehend: they really are united on being divided. The political class co-exist with one another in a mutually beneficial system by sabotaging coexistence among the Lebanese population. These double standards are enough to make the best political analysts’ heads spin. The leaders of Lebanese political parties and sects have been at war since 1975, but none of them have suffered. On the contrary, war and sociopolitical conflict has only made them richer and more powerful.

After the August 4, 2020 Beirut port blast, they activated that unity in the face of new common enemies: a united opposition front and the justice we demanded.

This is the first part of a story of how the Lebanese political class used the same old “divide and conquer” tactics, thus annihilating all chances to build a united opposition movement that could have brought down a flawed system.

Their game relies on creating controversial cases, usually around the proposal of illegitimate solutions to problems that they themselves created, or, to problems that can in fact be solved easily, but any authentic solutions would be a threat to their positions, power, or money. In this theatrical play of fake solutions to fake problems, or complex solutions, rather than obvious ones, to real problems, the people are caught between needing a solution and realizing that what’s being offered is never going to be achieved.

If Hezbollah ended corruption and allowed for transparency, how would they continue their dark growth as an internal mini state? If Hezbollah got rid of Samir Geagea, wouldn’t any other ambitious guy take over Lebanese Forces leadership? If Nabih Berri and Walid Joumblatt allowed peace and unity, how would they perform the mediator roles without conflicts? If Michel Aoun had ended Berri’s rule, who would he blame for his mistakes? They all speak about change and ending corruption, but none of them has made any moves towards such reforms, because all they want is to stay in power, to maintain their patriarchal roles. What unites the Lebanese Civil War’s warlords is that they are all existentially crucial to one another.

Through sowing chaos and forging fabricated scenarios that generally legitimize their existence and reinforce their goals, they are able to continue to agree to disagree. Furthermore, each of them is funded by outside forces, be it through political alliances, religious NGOs, associations, or even illegal trade.

Warlords can only do war. That is where they thrive. They will never provide peace. They do what they know best: sow divisions to keep conflict alive, ensuring that public discourse is focused on “us vs them”.

They wasted time on purpose, and we wasted time falling for their game. They’re masters of deceit, of creating the smoke that blinds us all.

We woke up late! Already in the midst of the country’s collapse. The ruling class have become virtually undefeatable. No matter how bad things get, their power runs deep and they remain resilient! Each one of them knows exactly the role he should be playing and stands firm in his position. It’s hard for us, as newly awakened people, to notice when we’re being played. Establishment politicians own most mainstream media, they own state institutions, and they have even infiltrated the opposition.

On August 4, 2020, a massive explosion took place in Beirut. It was a huge disaster, not only because it claimed the lives of almost 300 people and destroyed half of the city, but also in terms of what it revealed about one of the main pillars of any state: the justice system.

The first institution Lebanese people blamed for the Beirut explosion was the judiciary. Several groups active in the October 17 uprising came together and created an alliance. They fought for justice the best way they could: through street protests and social media. They came up with a hashtag, #people_will_judge to express anger and mistrust in the judiciary system. It was its flaws, its lack of enforcement of court decisions, and its internal corruption that allowed the ammonium nitrate to fester in the port for so many years.

Could such an explosion have happened without the blind eyes of the public prosecutors and many other judges who held no one accountable over the years?

Conflict was kept alive, opposition members were played up against each other, and the establishment won, just as they always have. Despite our initial resolve to keep the pressure up on the corrupt political class, we became tired of the daily quarrels over leadership, and one by one, we left.

Even now, we still don’t know much about the entire network – how the ammonium nitrate got there in the first place, and the manipulations and failures which allowed the dangerous substance to remain in the port.

Somehow, back then, out of nowhere, a rather well-knit narrative was imposed on the public sphere: “an abandoned ammonium nitrate shipment that entered the country in 2013 exploded”.

It is worth mentioning that in the wake of the explosion, Hezbollah banned journalists and activists from reaching the area until several days later, when the Lebanese army took over.

State institutions joined forces in securing and clearing the area, rather than in trying to save people dying under the rubble.

After the explosion, employees of the port were prohibited from entering both hangars, and no photography was allowed inside. Joe Bejjani, an Alfa Telecom employee who once worked as a photographer for the Lebanese Army, was the only one allegedly in possession of such photographs. On December 21, 2020, he was shot dead in front of his house in Kahale, an Aley district, by two unidentified men. The investigation into his death is, of course, “ongoing”.

In the aftermath of the explosion, the people came together, united in grief and rage. Even certain October 17 opposition groups which had been previously irreconcilable, put their differences aside. They refused to remain silent. They wanted to put pressure on the political class to unearth the truth, no matter what.

They protested, organized a 1-month memorial at the Beirut port, and called for another march for the week after (September 12) to the presidential palace.

The cracks in our united front started to show when we were preparing the protests against the presidency. Some of the members in the alliance opposed it. Others questioned their stance because they did not simply refuse to show up to the protest, but even campaigned against it.

It was clear to many of us that once the alliance started to make waves, garner support and put too much pressure on the political elites, internal divisions would start to appear, and sabotage attempts as well.

Conflict was kept alive, opposition members were played up against each other, and the establishment won, just as they always have. Despite our initial resolve to keep the pressure up on the corrupt political class, we became tired of the daily quarrels over leadership, and one by one, we left.

Looking back, I can see the patterns of division. What created the divisions was our push for an organized structure, for governance within our group, for rules, policies and procedures that would have helped form a strong organization able to challenge the political establishment.

But we could not. First, some groups refused to present an official count of their members. This was a problem, as many people belonged to up to six groups at the same time. Counting people who showed up for protests was difficult.

Then, there was resistance to distributing talents according to experience and skills.  A market researcher would want to act as a strategist because that is what he’s always wanted to do, for example, and someone with weak Arabic would want to read the protest statement.

Non-committed groups and individuals were also obviously leaking plans to third parties and organizing parallel protests. It left us all in confusion.

Whenever we would try to implement rules and guidelines, they were faced with rejection. “We are not in school,” they said. We weren’t. We were trying to change a political system without being able to put together a few rules.

We allowed everyone to join because we thought that numbers make us stronger. Some groups managed to keep up the illusion that they were important, although they had no real solid foundation. We ended up having too many voters and a single task used to take days to complete, until they started to take even weeks.

We ended up with no human resources strategy. We started to lose people and we were not recruiting.

We were left with those who had interest. Between non-existent groups and a lack of organized work, between the toxicity of some agendas and self-interest taking priority over public interest, the honest activists who were only there for the cause left, saddened by the situation.

At the end of the day, it is hard to tell people what to do when you’re not paying them salaries. No matter how much we made sense and no matter how much potential we had together, a lack of discipline and, above all, self-interest and ego, led to the alliance’s dissolution.

But how did the state- their state – contribute to gradually silencing our revolt?

The people shouted: “we will judge!” How did the state respond to that? To be continued…

The second part of this article will be published on April 28, 2022.