Your weekly Lebanon roundup from NOW. 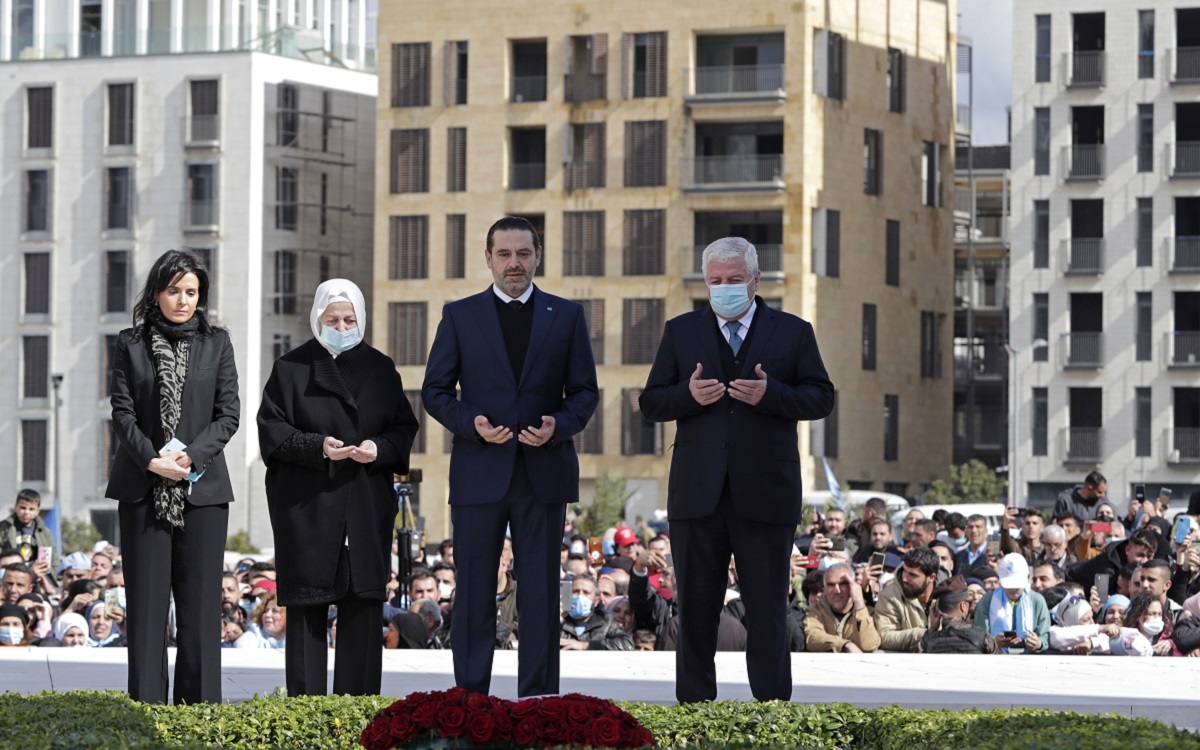 Lebanon's former premier Saad Hariri (C) alongside his aunt Bahiya al-Hariri and his uncle Shafiq pray at the gravesite of his father, slain prime minister Rafiq Hariri, in downtown Beirut on February 14, 2022, as Lebanon marked the 17th anniversary of his assassination. Photo: Anwar Amro, AFP.

“In Lebanon, we don’t always forgive, but most of the time we forget. The process is sometimes selective. We choose when to forget and when to forgive, depending on what we are told. Our leaders, all of them, shape our collective memories behind closed doors, and we always end up following them.

We are good followers, tame and compliant. We forgot the civil war that lasted for 15 blood-soaked years and went about our lives as if it didn’t happen. We embraced amnesia instead of embarking on the painful but necessary process of building a collective memory based on accountability and then forgiveness.

So why are we bringing this up now? We are entering a very critical phase in which we are being forced to choose between justice and stability. Deals are being made under the table – again – and our basic values might be compromised once more.

In the midst of all this, in order to resist another wave of collective amnesia, NOW Lebanon will try to show its readers the harsh and human reality of the people who were injured or who lost loved ones during the string of assassinations and bombings that have taken place since 2005.”

This is the beginning of an editorial written on January 24, 2011, by then NOW’s managing editor, Hanin Ghaddar. It was the opening of a series of stories that profiled the families of victims of assassinations. Bystanders and passers-by who lost their lives  in the wave of assassinations, starting in 2005, of politicians and journalists who had become too vocal against the Syrian occupation. In the meantime, others have perished: Mohamad Chatah and Lokman Slim.

On February 14, Lebanon marks the assassination of former PM Rafik Hariri together with 22 other people.

Although 17 years have passed since then, nothing has changed. We keep alive the memory of those killed, we pray for their souls to rest in peace, but we still have no hope for any real justice.

Since February 14, 2005 there has been only one attempt at delivering justice to the victims of assassination: the Special Tribunal for Lebanon, which is now ceasing its activities because Lebanon can no longer fund it. The institution sentenced only one perpetrator in absentia. It was impossible to get through the fortress Hezbollah built around its people.

As Hanin wrote 11 years ago, we should not forget. Real memory requires accountability and then forgiveness. Mausoleums should come afterward.

We managed to recover, together with some of our archive, most of the pieces NOW published in 2011 about families of assassination victims and we will republish them starting tomorrow, in an attempt at remembering what may now seem distant.

Hello, dear reader. This is your weekly Lebanon round-up from NOW, on a day of mourning like too many others in Lebanese recent history. There have been many blasts since February 14, 2005. And above them all, August 4, 2020 and its red cloud.

Commemoration: Lebanon’s former premier Saad Hariri returned to Lebanon on Monday to visit the gravesite of his father, former prime minister Rafik Hariri, in Downtown Beirut, where hundreds gathered to mark the 17th anniversary of his assassination.

Saad Hariri has announced his withdrawal from politics and left Lebanon at the beginning of the month, leaving many wondering who will fill the political leadership gap he leaves behind.

No justice: The families of the August 4 explosion victims broke into the Justice Palace last week. No one even stopped them. As a reminder, the investigation is still blocked as the head judge that leads the probe faces scores of lawsuits filed by politicians who he called in for questioning as suspects.

A group of children also held a sit-in in front of the French Embassy in Beirut to demand justice for the friend they lost in the blast.

Friends of Elias asking for help from the French in order to get justice for the 220+ victims of the Port explosion.
A year and a half later, still no justice. pic.twitter.com/9xT82pboXD

But these small lobby groups have had no echo in the glass bubble the Lebanese political elites live in.

The budget, approved: Lebanon’s President Michel Aoun headed a cabinet meeting on February 10 at the presidential palace in Baabda and managed to approve a budget after months of political deadlock.

Bitter victory: The budget contains policies to increase the revenue of the bankrupt state by raising exchange rates that determine custom duties, as well as hiking import and trade fees. Analysts warned this would increase inflation. Kareem Chehayeb looks into it for Al Jazeera.

A speech for posterity: But it is not the budget draft itself that took the spotlight, but PM Najib Mikati himself. He told the Lebanese that the government cannot provide electricity, water, and telecom services, all of which have until now remained at the 1.5 rate, “for free”.

“Let’s bear with each other,” he said, a tone deaf sentiment that angered a large part of the population.

This is what he probably meant when he said he was on a “kamikaze mission”.

Najib Mikati is a billionaire, his wealth is estimated at $3 billion.

A petition to the IMF:  Some of Lebanon’s leading lawyers notified the International Monetary Fund that the Central Bank’s continued financing of the Lebanese state is illegal.

Some of #Lebanon’s leading lawyers notified the IMF that the Central Bank’s continued financing of the State is illegal. Any funding of this mechanism would also be illegal, and proceeding knowingly can’t be opposable to a future honest, non-criminal ?? government & people. pic.twitter.com/2hQZzkBMjU

For background on how the Lebanese government borrowed from the private banking sector to feed patron-client networks and then defaulted on debt and blamed the banks, read Samara Azzi’s piece on why Lebanon should sell assets that are generating more debt.

No money, no poll: President Michel Aoun, who presided over the cabinet session that ended with the approval of the 2022 budget, told Al Akhbar, among other things, en passant, that the state “does not have money for anything.”

“That’s why I may have fear for the elections and concerns that the vote might not be held,” he added.

Embassies cut off: News that the Lebanese Ministry of Foreign Affairs is broke and cannot fund its diplomatic missions has been circulating since the beginning of February.

Federalization becomes decentralization: Kataeb leader Sami Gemayel told supporters at an electoral gathering that the party sees decentralization as the only way to move forward after elections. The main objective, he says, was to put the project on the agenda of the General Assembly.

Passenger data leak: The Ministry of Health has suspended its MOPH PASS platform to investigate a data leak. The platform, similar to the EU’s Passenger Locating Form, collected the data of passengers arriving at the Rafik Hariri international Airport, including diplomats and dignitaries.

Migration: “The Lebanese citizens have a pessimistic outlook towards Lebanon’s future and around 40 percent are considering emigration,” a survey by Konrad Adenauer Foundation released on Monday said. It also said that hope in the elections and the change they may bring was a silver lining.
If elections actually take place.

Podcasts:
The AUB Asfari Institute is launching Active Arab Voices, the only university live podcast in the region.

It’s not a first when podcasters interview each other, but Sarde after Dinner went for the Happy Hour. Here is the episode.