As Saad Hariri and his Future Movement are no longer running in the upcoming parliamentary elections and more Tripoli residents show disappointment with the old political guard, new small and independent political organizations see an opportunity to raise their voice. 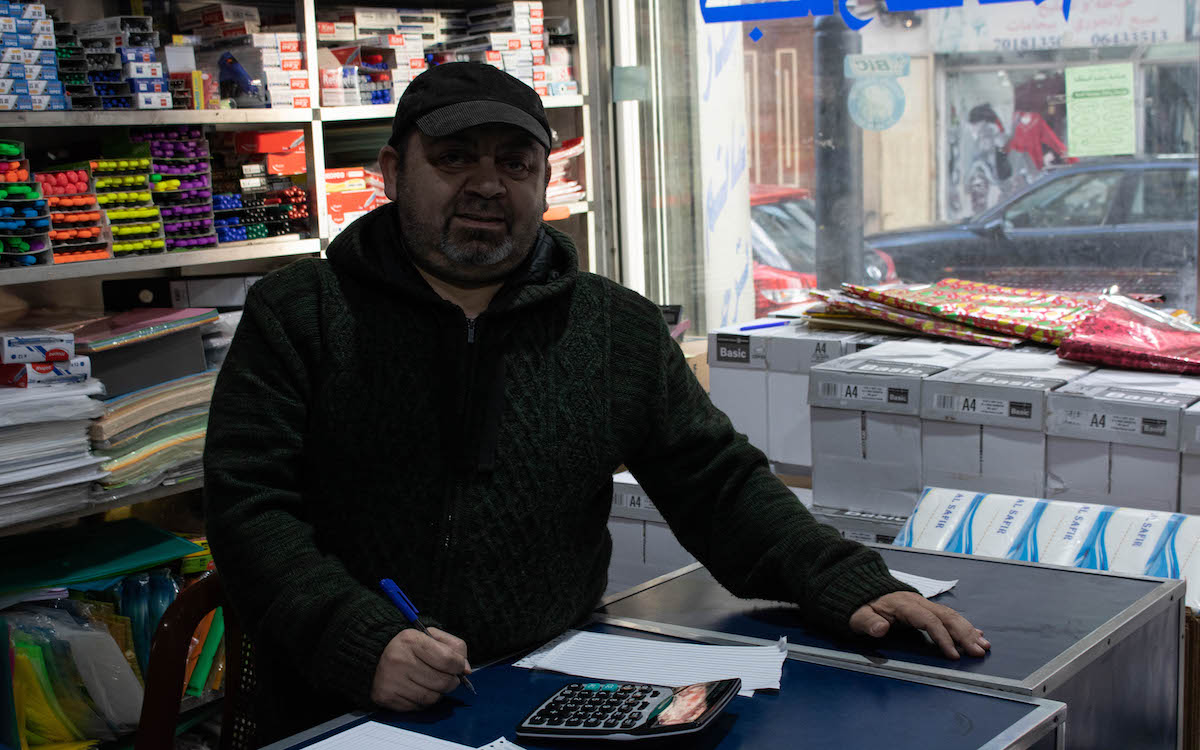 Dia Ghanem stood at the counter of his small office supply store in the heart of the al-Tal neighborhood of Tripoli looking over transactions from earlier that day, posters on buildings that surround the store professing support for Prime Minister Najib Mikati looking down at any passersby.

Customers continued to flow into his store, asking him the price of a box or packing supplies.

The 50-year-old is not particularly outspoken when it comes to politics. However, he is not afraid to voice his opinions of Lebanon’s politicians when asked. To him, they’re all corrupt and need to go.

Ghanem is not alone in his thinking.

For decades, politicians have used Tripoli as a means of securing the Sunni vote so that they could be elected to Parliament, only to fail to fulfill any of their campaign promises and leave the residents of the city to fend for themselves.

Because of this, many now say that it is time for change and they would gladly vote for any candidate who is independent of the ruling political class as long as they promise to usher in change.

“I just want new faces, people who are willing to make a change and benefit our country,” Ghanem told NOW. “I would rather vote for an independent party. We want to get rid of these parties.”

But despite the new wave of citizens eager for alternatives, opinions are mixed in Tripoli.

Some, like Ghanem, are willing to vote for any candidate that promises change. Others have not voted in the past and do not necessarily see the point in doing so now, with little faith that anything will change no matter who they vote for. Then there are those who continue to support Sunni leaders like Mikati and former Prime Minister Saad Hariri and who say that they will only vote for them.

After Hariri announced that he and his Future Movement would not run in the upcoming election and in the wake of the October 17 uprising and August 4 Beirut port explosion, it is unclear how Tripoli’s lucrative Sunni vote will swing.

Tripoli without a Future (Movement)

Hariri has long seen widespread support in Sunni areas, especially those in Tripoli.

Even after Hariri announced his decision not to take part in the election, posters expressing support for the former prime minister continue to be on display in many neighborhoods throughout the city.

Nadia, 35, says she has supported Hariri for as long as she remembers and even cried after he said that he was retiring from political life.

“I love the Hariri family, although they have not benefited me personally and I don’t need that, but I love them,” she told NOW. “Saad Hariri is the only politician that did not soak his hands in blood. He is an honest human being. But the other politicians did not let him do his job.”

While supporters of Hariri like Nadia view him and his party without fault, others do not view him as kindly.

“Tripoli has been used as a group of people that Hariri was commercializing in one way or another in order to facilitate his own entrance [into Parliament],” Misbah Ahdab, a former independent March 14 MP for Tripoli, told NOW. “Voting for Hariri was voting for maintaining this imbalance in Lebanese society in general.”

Nadia, who owns a small store in the Zehrieh neighborhood, is not oblivious to the struggles that many Tripolitans are facing in the wake of the worsening economic crisis, but she argues that it was the other politicians who caused this, insisting that Hariri’s hands remained clean.

Because of her unwavering support for Hariri, she says that she has “sworn to not vote anymore” and remains hopeful that the Sunni leader will change his mind and decide to run in the elections.

With Saad Hariri’s brother, Bahaa Hariri, signaling that he plans on entering Lebanon’s political field, this presents hope for Saad’s supporters that the Hariri name will continue to play a significant role in Lebanese politics.

Critics of Hariri and the role that he played in the decades of corruption that has run rampant in Lebanese politics argue that even if Bahaa runs in the elections, nothing will change as he is cut from the same cloth as his brother.

“Nothing will happen. We’re still doomed,” Ghanem said. “Even if his brother Bahaa came, I believe it’s the same policy and nothing will change.”

Due to this pessimism about Lebanon’s politics, some say that these elections are the most important in Lebanon’s history as they believe that unless new and independent candidates win, the country will remain doomed.

At the height of the October 17 uprising, Tripoli was one of the main centers for protests, next to only the capital Beirut, with the city even receiving the nickname ‘Arous al-Thawra,’ or bride of the revolution.

Even though protests are now far and few between, there is still an apparent desire to see political change in Lebanon.

Ahmad, 60, owns a small, hole-in-the-wall shop in al-Tal where he buys and sells gold and is hesitant to discuss politics as it can be a touchy subject for some in Lebanon.

But, when alone in the safety of his store, he openly expresses contempt for Lebanon’s politicians.

“Kilon yani kilon (all of them means all of them),” he told NOW. “We have tried to get them to do something so many times but they have never responded. They only do something when there are elections. But then, after that, you don’t hear from them again for years. All of them. They are all without morals.”

Ahmad did not partake in the 2018 elections, making him one of the nearly 150,000 registered voters in Tripoli who did not cast their vote, because he believed that nothing would change even if he did.

However, now, Ahmad says that he is considering voting in the planned May 15 elections if he sees that there are new people on the ballot who promise change for Tripoli and Lebanon.

“God willing it will bring new faces that will replace the old politicians because we have arrived at an abyss,” he stated.

Unlike Ahmad, Ghanem voted in the previous election for an independent candidate who ended up losing.

This has not deterred Ghanem, though, who says that he sees these elections as important and urged everyone to cast their ballots.

“The elections are really important and everyone should participate in them,” Ghanem said. “Especially in these tough days. God willing change will come and we are going to move forward. Hopefully, new faces would come and benefit the country especially after Hariri’s resignation.”

“I just want new faces, people who are willing to make a change and benefit our country,” he later added. “I would rather vote for an independent party. We want to get rid of these parties.”

According to Ahdab, Tripolitans are not asking for anything “exceptional” and just want what everyone else in Lebanon is looking for; to be able to live their lives in peace and comfort.

“I think it is about time to have an agenda here and it’s about time to be able to since we couldn’t do anything [before] since everything was controlled by the Hariris and Hariri was not doing anything except coming once every four years for the elections in order to get votes with false promises every single time,” the former MP stated. “They want to open up to the country, to the other religious groups and we want to have a structure that would be able to survive or that would be able to exist in the coming years because, now, it is a big mess that is happening.”

With a serious agenda, Ahdab believes that it is possible that independent candidates might give the traditional political parties a run for their money in May.

With the approach of elections, cities throughout the country are plastered with campaign posters for various candidates.

The 41-year-old grew up in Lebanon during the 15-year civil war that devastated the country and later left for Australia to pursue his education.

Now, Matar splits his time between Australia and Tripoli, where he manages his group, Ihab Matar for Development (IMD). They started out as the NGO Wajeb Inssani that provided humanitarian assistance like food parcels and university scholarships in 2019. Matar is now running as an independent candidate.

He was out of the country when asked to speak about his candidacy, so IMD arranged an interview with the organization’s executive director, Dr. Moussa el-Esh.

“We work with politics in an original way and not like the ‘traditional’ way of doing it here,” el-Esh told NOW. “When it comes to Lebanon’s politics, each party takes a part and that is not politics. All the sects and all of the political parties try to take what they can from the state. This is why [the economy] failed. What we are is ‘new politics’.”

According to el-Esh, new politics means public affairs management which he claims is “a true management belonging to the people.”

El-Esh says that Matar is looking to unite people in Tripoli by being present in its various neighborhoods so that everyone feels represented.

“We came as new faces. Tripolitans,” the 43-year-old executive director said. “We are trying to be different political faces through bringing the masses and sewing the divide. We are not just in one place or the other. We are here for everyone.”

El-Esh criticizes the current political establishment for their disregard towards following through on the promises that they make to voters in Tripoli, saying that “they come and make promises before the elections. They make basic statements and then they leave after the elections. They come, get the votes and then leave until the next four years [for the next election].”

However, el-Esh says that Matar is willing to work with all political parties if he is elected, arguing that it is through working together that change will come.

This is something that few in Tripoli are optimistic about, believing that the current political class is incapable of change and has no interest in doing anything that would lessen their grip on power.

“As long as the same politicians are in rule, there will be no peace,” Ghanem said. “Wasta, or connections,  will still be there, corruption, favoritism.”

Elections are only three months away and, despite their differences in beliefs, Nadia, Ahmad and Ghanem are all equally skeptical about whether they will actually take place.

Despite this, those looking for change remain hopeful that eventually change will come, even if it seems now like the traditional political parties will remain in power forever.

“When you hear the news, you don’t feel hopeful thinking maybe the same politicians are going to rise up, but we still believe that God will not leave us, we are not going to leave this country,” Ghanem stated. “Our grandfathers built it and we will not leave and hopefully change will come sooner or later.”