HomePoliticsInterview“Mother of the Revolution” they called her
Interview
Dana Hourany

“Mother of the Revolution” they called her

Lina Boubess, 61, who hasn’t missed one protest since October 2019, talks to NOW about her motivations to take to the streets and call for political change. 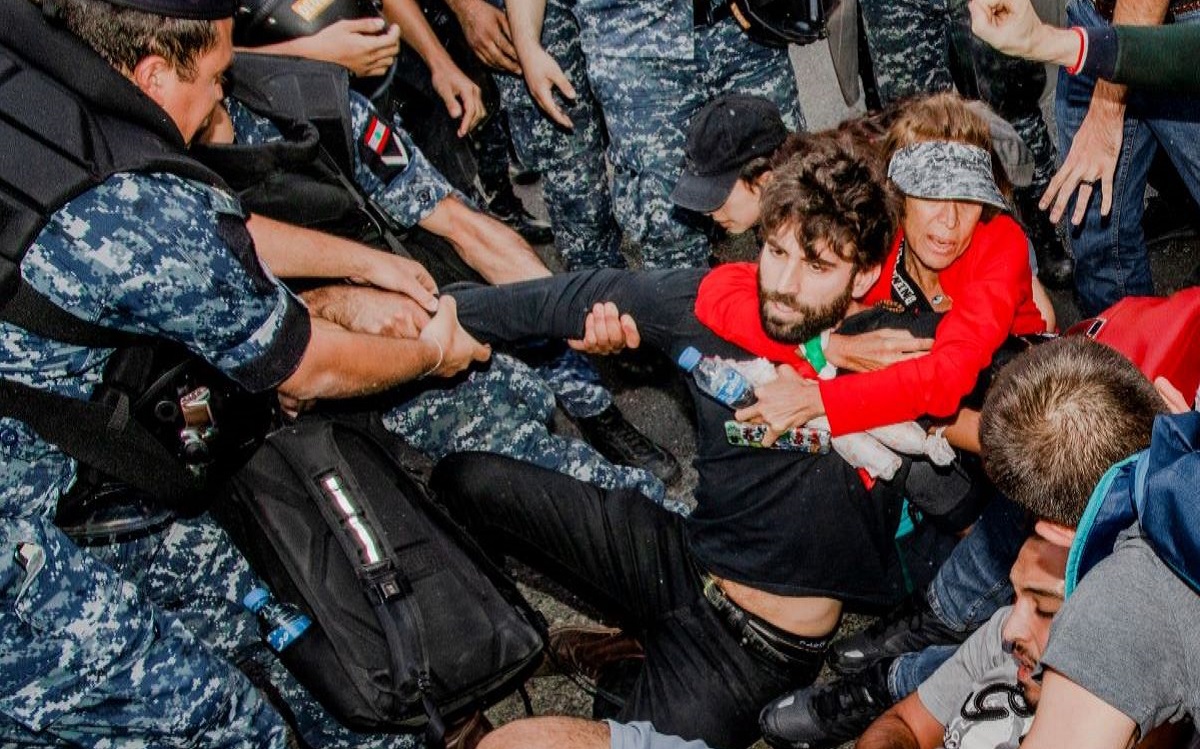 Lina Boubess hugging a young protestor as riot police tried to arrest him in November 2019. Photo: Courtesy of Lina Boubess.

She used to teach sports, but now, at 61, she spends her time in the streets, protesting against corruption.

That has become her fitness routine, she says. Since October 2019, Lina Boubess has not missed a protest.

In November 2019, at the peak of the intense anti-government protests that shook Lebanon after the financial crash, a photograph of Boubess wearing a red t-shirt and a visor cap and hugging a young protester to prevent the security forces from arresting him went viral on social media sites.

The woman wrapped her arms around the young man’s shoulders, clinging ferociously on, as police yanked his arm in an attempt to lift and detain him.

The Mother of the Revolution, they called her.

Although she’d rather relax on days where she feels extremely tired, the weight of the struggles that her fellow Lebanese face pushes her to keep protesting for a better Lebanon.

“I used to stand in the front lines of the protests,” Boubess said. “I’d say to myself that if the security forces saw a lady my age they might hesitate before attacking the protestors.”

For Boubess, helping rebuild Lebanon for the upcoming generation is of utmost importance, as she holds empathy for the young Lebanese to whom she believes Lebanon belongs.

“This is your country, your future and they stole that from you,” Boubess stated. “How can you remain silent when they’ve taken away your money, your education, your hopes, and dreams? For me personally, I can’t, and this is why you’ll always see me on the streets.”

The rage she feels has been years in the making as she admits to being part of a generation that accepted reality as it was, regardless of the corruption, injustice and impunity.

The Lebanese civil war had just started. Boubess and her siblings were still pursuing their education when, all of the sudden, they found themselves at the front lines, in Sodeco, Beirut, hiding from various militias.

“It was awful,” Boubess said. “Beirut is already a tiny city and they had divided it into two, East Beirut and West Beirut. It got so ridiculous to the point where I couldn’t see my friends because one lived on the eastern side and the other lived on the western side.”

This war, according to Boubess, resulted in a generation that did not know how to stand up for itself nor how to demand its rights. It was a generation that learned to survive against all odds, to adapt to any hardships and find a way out of any trouble.

“We accepted the persistent humiliation,” she stated. “We allowed them to get this far.”

“When they cut off the electricity, we brought generators. When they didn’t provide us with water, we bought our own. My generation is the one responsible for the current situation.”

The main difference she observed between the older Lebanese generations and the younger ones is the courage to express oneself.

“The younger generation broke all taboos,” she said. “Never before were you able to cuss any political leader but now you can. That’s all due to the young people’s unwillingness to conform the way we did.”

After 15 years of endless fighting during the war, Boubess admitted that fear lingered inside of the citizens’ psyche and the need for survival trumped the need for change.

“My generation never spoke up,” she added. “We witnessed a lot of violence, there were daily fights between various parties and we just adapted to whatever circumstances we were faced with.”

However, despite the horrors of the war she experienced, the dogma of sectarianism that Lebanese politicians reinforce to divide and conquer its population never penetrated her childhood.

Boubess attributes most of her current ideologies and mindset to her parents, to whom education was of the highest value, and issues of religions and sects held little to no importance.

“This is how I was raised,” she said. “My dad was a professor at the American University of Beirut so there was a huge emphasis on education. There was never any mention if someone was Shiite, Sunni, Christian, or Druze.”

She also attended a secular school in Beirut, which further enhanced her ideal of a Lebanon free of religious divisions.

“I want a unified country, not one country with several corners ruled by different mafias.”

Education, for Boubess, is a huge factor of change in Lebanon, as she believes it’s the intellectuals that will lead the country to a better future.

“Take the example of the French revolution,” she stated. “It was done by intellectuals because the poor person is too busy trying to make his daily living so he won’t have the energy to fight. So it’s our responsibility to keep this fight going. Anyway, it’s too late to go back now even if we wanted to.”

However, she added that intellectuals in Lebanon suffered a violent history of assassinations. People like, Samir Kassir, Gebran Tueni and most recently, Lokman Slim.

“It’s not only dangerous to speak up but they keep you improvised purposefully to better control you,” she added. “They want to keep areas like Bekaa and Tripoli poor and uneducated so the people don’t reach a level of awareness where they revolt against their rulers.”

Nevertheless, the end goal for her remains the same as she dreams of a “Lebanese identity” that she can pass on to her kids.

“I don’t care about your political divisions,” she stated. “I want a unified country, not one country with several corners ruled by different mafias.”

Boubess also asserted that, despite all the tactics employed by the politicians during the October 17 revolution to incite fear of a new civil war, her activism was sparked by the hope she witnessed in 2019, and will continue because of it.

On November 19th 2019, Boubess’s son Karim, 30-years-old, hit the streets  to protest. Shortly after, his mother joined him. This was her first experience in the world of social activism.

“I share the same pain as every other Lebanese,” she said. “I can’t access my money, my kids’ future is ruined and this corrupted mafia is ruling the country. This is why I started going.”

Her son then suggested a “sit-in” where the protestors would sit in the streets and lock hands, as a way to block the road. Joining them was her son’s friend, also Karim. As they were seated in protest,  the security forces headed towards the friend, attempting a forceful arrest. However thanks to Boubess’s protective reflex, their efforts were thwarted.

“No one wants war. Only humanity, empathy and compassion matter now. We should focus on helping out our neighbours or families, within our capacity of course. Even the diaspora is helping out by sending funds to help us renovate houses or distribute food boxes.”

“I don’t know what got into me,” Boubess stated. “But I felt a strong force in me and I grabbed his arm tightly to stop them from taking him. I couldn’t bear this scene of innocent protestors being taken away. That’s how I gained the title of Mother of the Revolution. Anyway, everything we were doing was legal, the security forces were the ones breaking the law.”

This close-up on injustice and maltreatment fueled the fire inside of Boubess to break all barriers of silence and oppression.

“It’s true that they oppressed us a lot,” Boubess said. “But one thing the revolution created is a space for people to express themselves in ways they’ve never done before. Just look at the LGBTQ+ community. Back in our days, they never used to speak up. Now they join our marches proudly ad loudly.”

The persistent effort Boubess puts into her activism does not come without a price. She described the nagging guilt that befalls her if she skips a protest.

“My generation were the ones without dignity,” she added. “You, the young people, are the true people of the revolution. Even though, they are happy to see me when I go down to the streets, I tell them that I’m happier that they are insistently working on change because they are the true bringers of change.”

For Boubess, the biggest turning point for Lebanon was August 4, where a particular history ended, and a new one began.

“Beirut has changed drastically,”she said. “They destroyed Beirut and they possibly want to turn it into a haven for Iranians, I really don’t know,” she added sarcastically.

Boubess strongly believes that Lebanese women have a big role to play in bringing about change, spreading awareness and participating in social activism. But regardless of gender, religion or location, all Lebanese people must come together to help out in any way they can.

“Since October 17 2019, we’ve seen that people love each other,” she stated. “No one wants war. Only humanity, empathy and compassion matter now. We should focus on helping out our neighbors or families, within our capacity of course. Even the diaspora is helping out by sending funds to help us renovate houses or distribute food boxes.”

When asked about having any fear of violence or clashes with the military or security forces during protests, Boubess stated confidently “not even one bit, what more do we have to lose? They’ve taken everything.”