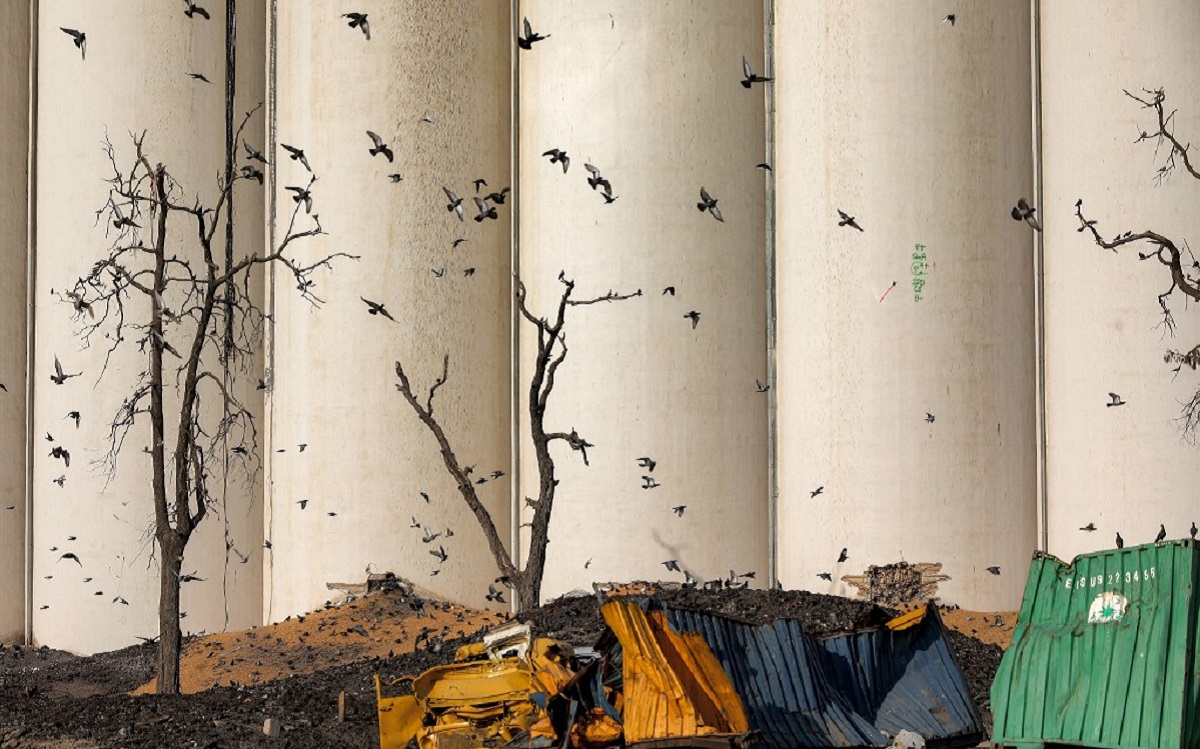 Pigeons fly over destroyed containers near the damaged grain silos at the port of Lebanon's capital Beirut on July 14, 2021, almost a year after the August 4 massive explosion that killed more than 200 people and injured scores of others. Photo: Patrick Baz, AFP.

It is a rare occasion to see ambassadors stationed in Lebanon visit a regional power, together, in search of added diplomatic support and a bid to save this country from its final blow.

And it is an unfortunate reminder that Lebanon’s largest problems are not local, despite the immense sacrifice and determination of protestors and burgeoning political movements.

There is no dodging the fact that reform is an absolute necessity – regardless of who is governing Lebanon – and that Lebanese citizens are the ones who will vote new politicians in or keep the same lot.

But well-intentioned international attempts at pushing for regime responsibility and supporting an active civil society are immediately dampened and destined to failure so long as Lebanon’s sovereignty and its needed neutrality are left out of the discussion.

Lebanon’s preeminent sub-state group is not a domestic affair. It is not the IRA, ETA or even FARC. It exceeds Bosnian-Serb paramilitary capability. And its annual Iranian funding guarantees sustainability and survivability as the Lebanese economy collapses.

Separating Iran’s proxy tactics from Lebanon’s paramount paralysis will allow for – at best – temporary crisis management, and a burden you will pass to your successors.

In short, the tools necessary when challenging the worst aspects of sectarianism and corruption without fear of assassination.

Locals that tried over the past 16 years were killed whenever they approached the issue of Hezbollah’s weapons.

And without diplomacy with Iran and its Revolutionary Guards that takes Lebanon into account, the reformists you meet and yearn to take charge will remain on the margins of politics rather than the halls of power.

You are both right to reject a forced Hezbollah disarmament culminating in added pain, strife and war.

That is not your responsibility nor any regional player at odds with Iran’s policies. But you have the tools necessary for tough diplomacy to negotiate a way for Iran’s preferred proxy to no longer dictate Lebanon’s security and foreign policy.

International consideration for Lebanon’s sovereignty ended in the 1980s, during the worst years of civil strife. Both of your countries lost hundreds of marines and soldiers stationed as peacekeepers, trying to resuscitate the Lebanese state as Israel’s army withdrew south of Beirut.

A continued disinterest in direct military involvement is understandable and equally unwanted. But both of your countries left Lebanon for the same reason this country remains ungovernable, and we remain a theater for regional war ensuring ungovernable paralysis with no end.

Both of your countries gave the green light to Syria’s invasion turned occupation 31 years ago. And the last time you defended our independence was following the March 14, 2005 protests that helped ensure the Syrian army’s withdrawal from Lebanon with your countries’ indirect support.

The years thereafter were marked by two terms of disinterest from the Obama administration’s preference to nuclear dealings in Lausanne, followed by four erratic years of a Trump range of rage from minimum to maximum pressure.

Renewed chants in October 2019 for accountability were silenced once more by Hezbollah. We are unable to push for lasting reform without violent reprisal. And we deserve a coherent international policy that shields Lebanon from regional crises.

Ammonium nitrate does not simply show up in Beirut’s port. We unwillingly stored Assad’s deadliest weapon and paid an immense price for his regime’s survivability. Our layers of security deliberately turned a blind eye from a reckless and dangerous dump in the heart of the city.

One that supports our disassociation and allows the Lebanese state to regain control over its most sensitive sites, ranging from its telecoms network to airport, seaport and borders.

Our experience is no exception.

Had reluctance replaced diplomacy, European countries would have faced further misery following World War II. The US and the Soviet Union enshrined neutrality in Austria’s constitution in 1951. Finland survived Cold War tensions in the same way as a neutral state.

And countries that comprise former Yugoslavia today – despite its brutal breakdown – are moving far from their tormented past to a permanent post-war era of further European integration thanks to the Dayton Accords and EU / NATO support.

Lebanon needs that type of architecture to shield it from regional turmoil and allow for protest movements to transition their demands to authority.

Local conversations that address the restoring of full authority over Lebanon’s territory (which it lost in 1970) repeatedly reach a dead end. A result of intimidation and assassination by Hezbollah, and the reality that a proxy militia can determine just how much reform is tolerable and how much authority is negotiable.

The Special Tribunal for Lebanon delivered the first of many steps towards justice. Regardless if its current suspension results in termination due to budgeting constraints, a verdict was delivered, and a Hezbollah member stands accused for attempted and successful assassinations from 2004 – 2005. And therein lies Lebanon’s predicament: we know the individual named and cannot arrest him out of fear of sparking a civil war with Hezbollah.

The port blast nearly one year ago that brought President Emmanuel Macron to Lebanon the following day was a culmination of all problems facing our post-civil war disorder.

Ammonium nitrate does not simply show up in Beirut’s port. We unwillingly stored Assad’s deadliest weapon and paid an immense price for his regime’s survivability.

Our layers of security deliberately turned a blind eye from a reckless and dangerous dump in the heart of the city.

Macron, himself, tried bringing incompetent Lebanese leaders to the negotiating table last year and persuade them to provide basic services for their citizens and clean up their corrupt act.

Reform is a Lebanese domestic issue through and through, and no external player can do the long and difficult work of good governance. But getting to the starting point requires ending all aspects of the civil war once and for all.

A strategy that was destined to fail when Hezbollah was reframed as a party capable of reform, separating its politics from proxy.

Reform is a Lebanese domestic issue through and through, and no external player can do the long and difficult work of good governance. But getting to the starting point requires ending all aspects of the civil war once and for all.

There will be no meaningful change or a successful revolution so long as Hezbollah remains armed, hijacks institutions, protects the governing mafia you know well, suffocates domestic opponents and threatens political violence.

No justice, no accountability, and a foreign policy that benefits Iran over Lebanon.

On the local front, further sanctions are needed. Following US Treasury’s listing of Yusuf Finyanus and Ali Hassan Khalil, The Magnitsky Act’s targeting of Gebran Bassil sent the right message to other Lebanese officials – that beyond their relationship with Hezbollah, circumventing Lebanese state funds for personal gain and widespread corruption will no longer go unpunished. The EU’s intended sanctions regime framework – meant to be in place by the end of July – will help hold Lebanese leaders to account.

But that is a step that must be complemented with a robust regional policy, otherwise it will run dry. Focusing on scolding mediocre and incompetent politicians wrongly assumes they have the capacity to change. The ones in power today are the direct and indirect consequences of political violence. The ones that defied Hezbollah were murdered in broad daylight.

Beyond a visit to a regional capital in a last-minute bid to apply pressure, host a summit for Lebanon’s sovereignty and neutrality. There is renewed appetite from the US to engage Iran alongside European allies. Rather than sidestepping regional policies in Lausanne nine years ago and Vienna today, bring them to the negotiating table and determine what Iran needs in return for letting go of Lebanon.

None of this is naive. There is no other way out.

Hezbollah must transition from militia to political party, only. That can only be done through diplomacy with Iran.

Support what remains of a fledgling republic all too disfigured from half a century of chaos and conflict.

Stand with those demanding democracy and transparency in the face of zealotry and tyranny. Help put our cause back on the map. And let Lebanon shine once more.