Investment banker Samara Azzi argues that the President’s proposal to default on internal debt interest payments is a prelude to a total internal default. Should it happen, it could cause a deeper social crisis. 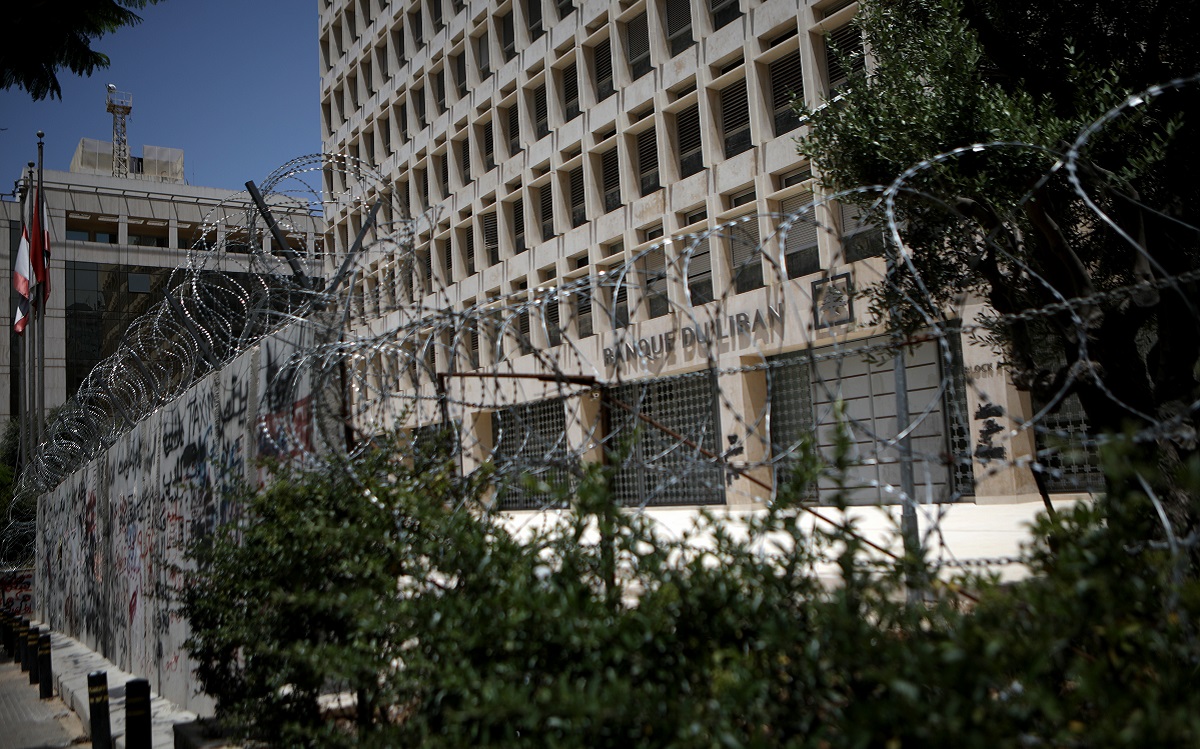 This picture taken on May 20, 2020 shows a view of the fortified entrance of the Banque du Liban, Lebanon's central bank, in the capital Beirut. Photo: Patrick Baz, AFP.

We are on the verge of an internal debt crisis.

On February 10, during the cabinet meeting he presided over, President Michel Aoun proposed the cessation of interest payment on the Lebanese internal debt.

The debt interest bill comes to a total of LBP 7.6 billion out of which LBP 1.2 billion is owed to the international private sector. The remaining LBP 6.4 billion is split – one-third between Lebanese commercial banks and two-thirds to Banque du Liban.

The president’s proposal means to deny the commercial banks and the central bank the LBP 6.4 billion interest payment. Instead, the money would be allocated to Electricite du Liban, to fund the state-owned giant with LBP 4.266. The remaining LBP2.133 would be spent to increase the salaries of the company’s employees.

Do you recall that state asset that gathered the $42 billion in public debt – on you and me, and other Lebanese? Now, that same state asset would be squeezing literally the last dollar out of us all.

That state asset has public sector employees, and now they are getting a pay raise at the cost of the private sector and its interest.  While more and more people employed by vital private sectors – like education or healthcare – lose their jobs or work at half salaries, employees of the  public sector assets that bankrupted all of us are getting a wage increase! Welcome to the junta rule.

What is internal debt anyway?

It is the fiscal debt held by creditors that financed the government deficit.  So, the Ministry of Finance issues treasury bills to the central bank (BDL). BDL buys treasury bills from the government to finance the deficit. BDL then resells those to other creditors, in this case, to fund Social Security Services, public and private Unions Security Funds such as those of the Order of Engineers, Physicians, and other professional organizations.

It is politics, not policy that this gang is working with. The real policymakers are dead!

In the case of a default on internal debt, you would be moving the fiscal deficit (what the government spent) from the government’s treasury to the central bank balance sheet, ensuring that the hole at BDL gets deeper and wider.

The Russian financial crisis that peaked on 17 August 1998 was the only crisis where the sovereign defaulted on its internal debt. In an effort to prop up the currency and stem the flight of capital, in June 1998 Prime Minister Sergey Kiriyenko hiked the GKO (bonds issued by the Finance Ministry) interest rates to 150 percent.

In the case of a default on internal debt, you would be moving the fiscal deficit (what the government spent) from the government’s treasury to the central bank balance sheet, ensuring that the hole at BDL gets deeper and wider.

If you wanted to fire the governor of BDL Riad Salame, and you couldn’t, why not make his job more difficult? That could be the one aim of this cloud of default: hoping it would force him to resign.

If Salameh refuses to extend an upfront payment for the electricity sector, why not just put your hands in his pocket and take it yourself? What rules and regulations survive under military rule?

“Financial repression” includes direct lending to the government by captive domestic audiences (such as pension funds).

Governments can stuff debt into local pension funds and insurance companies, forcing them through regulation to accept far lower rates of return than they might otherwise demand.

But domestic debt can also be reduced through inflation. In the case of Lebanon, domestic debt at default was valued at $61 billion and, through hyperinflation, this has since been reduced to $5 billion (at the 20,000 LBP rate). Hyperinflation eroded the domestic debt and your parents’ pension funds have been rendered worthless. So, keep working and sending that money back home! The junta is now stealing your future income.

The default can also mean that the domestic lenders cannot pay their taxes. Without these much-needed tax payments, the sovereign’s suffering increases and we go into a chain reaction of deficits causing even bigger deficits.

Such defaults usually cause the government’s net tax collections to fall. Domestic governments then face further fiscal pressures that can possibly lead to more defaults.

This can cause a chain of reactions that spills over more and more to the private sector. Think, if all of these social security funds are unable to pay their bills, what happens? Having wiped out 80 percent of the value of their assets, they in turn would be unable to meet their clients’ social, medical, and pension needs.  If these individuals have commitments somewhere else, that might also cause them to default on another lender.

The default can also mean that the domestic lenders cannot pay their taxes. Without these much-needed tax payments, the sovereign’s suffering increases and we go into a chain reaction of deficits causing even bigger deficits.

The average fiscal cost of internal debt crises from a sample of emerging market countries is 19.7 percent of GDP (see Reinhart/ Rogoff Study).  Imagine our GDP being reduced further by even half that amount! What remains of Lebanon would be only ruins.

Welcome to Axis economics, unable to create wealth and fund its governments, but insists on robbing them in many colorful ways too.  Forget rule of law, welcome to totalitarian rule.

Run, Riad, run! And take the gold with you.