Suppressors and freedom of expression

A brawl at the Beirut Book Fair over a portrait of IRGC former commander Qassem Soleimani imitating pop culture effigies of Che Guevara exposes deeper rifts in Lebanese society, which cannot be healed by a debate on freedom of expression, analysts say. 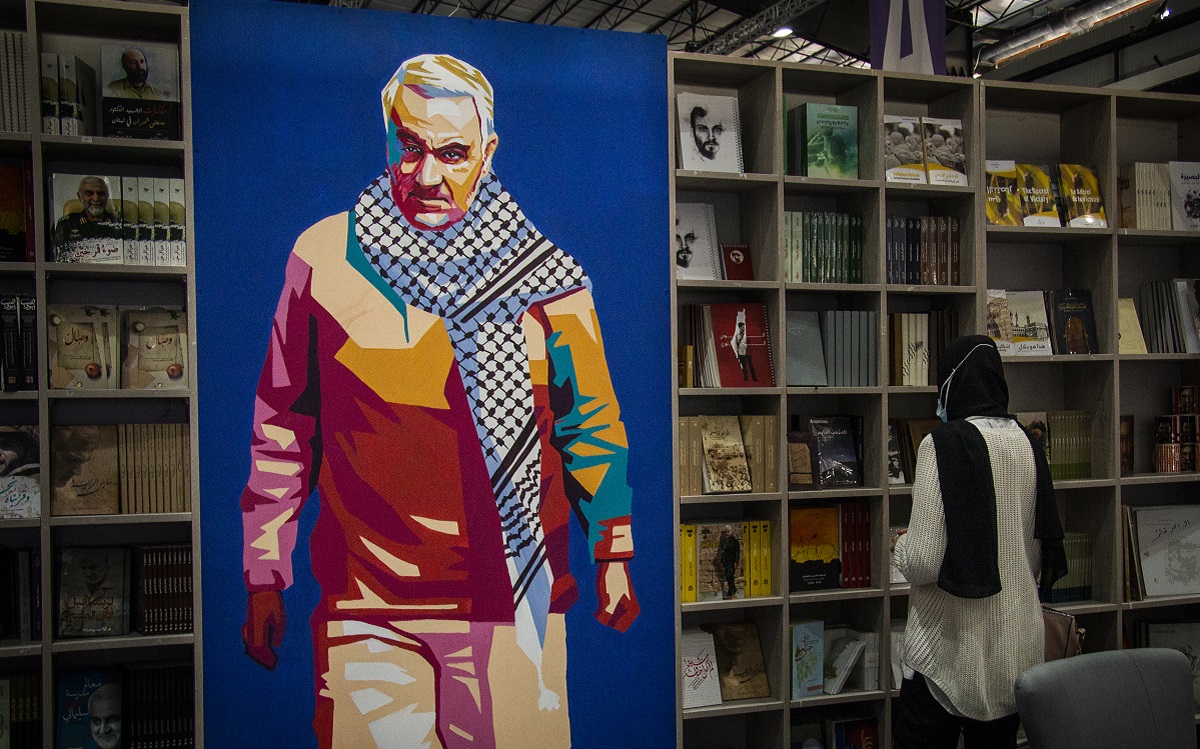 A portrait painting of Qassem Soleimani, the late Iranian commander of the Quds Force, a division of the Islamic Revolutionary Guard Corps that handles Iran’s overseas operations, is seen in Al-Mawada publishing house's pavilion on March 8, 2022, in Beirut, Lebanon. Soleimani was hunted down at Baghdad airport and assassinated by a U.S. drone strike in 2020. A scuffle had erupted the day prior between attendants and activists over the portrayal of a painting of Qassem Soleimani, late IRGC senior general, where a man punched the poster and demanded its removal. Photo: Sally Abou alJoud, NOW.

After bouncing back following a forced three-year interruption, the Beirut International and Arab Book Fair slid into conflict last week when a group of activists protested the portrayal of a grand painting of slain Iranian Major General, Qassem Suleimani.

Two of the activists, identified as Shafiq Badr and Nelly Qandil, were assaulted for chanting, “Beirut free, Iran out,” and Badr was severely beaten up after punching the poster, demanding its removal, and tossing the stall’s books off the shelves.

A video showing the confrontation was widely circulated on social media with one activist yelling, “I am Lebanese, I am Sunni,” when asked to leave the booth. While the activist was holding his ground, a group of men charged toward him stating, “we will show you what freedom is like.”

The incident sparked controversy on Lebanese social media, between pro-Hezbollah groups and opponents of Iranian influence in the country, in addition to freedom of expression activists.

But some analysts say the problem goes deeper than a mere incident involving freedom of speech and violence at the Beirut Book Fair.

“The controversy reflects a division that is much deeper than what happened during the Book Fair. It is a division that has defined Lebanese politics at least since 2005 and was exacerbated by the Syrian conflict. The solution cannot be cosmetic, neither at the level of cultural events nor at the level of what to do with billboards,” said Ayman Mhanna, executive director of the Samir Kassir Foundation, an organization that supports freedom of expression and democratic freedoms in Lebanon and across the Middle East.

A controversial figure at a book fair

Qassem Soleimani was the Iranian commander of the Quds Force, a division of the Islamic Revolutionary Guard Corps that handles Iran’s overseas operations before he was hunted down at Baghdad airport and assassinated by a U.S. drone strike in 2020.

A highly controversial figure in Lebanon, Soleimani is frequently rendered a war criminal for being responsible for the death of thousands of civilians in Syria and Iraq. His Lebanese supporters, on the other hand, often adherents of Iran-backed Hezbollah, deem him a “hero”, and welcome billboards and statues of him around the country’s Shiite neighborhoods and villages, including the airport road, provoking opponents who interpret it as a symbol of Iranian hegemony.

“There shouldn’t be any problem with you having books from multiple political backgrounds about events, history, personality, etc. Otherwise, it would be censorship,” journalist and writer Luna Safwan told NOW.

The writer came under fire on Twitter when she expressed her disapproval for the presence of Soleimani’s poster at the book fair and for the disproportionate violence the activists were met with when they tried to take the picture down.

“There’s a big difference between having a section for Iran as a country, with its culture and history, and having a stand that is politically bold about a leader who is that controversial,” she said.

“In times when he’s referred to as a terrorist and as a criminal, we want to tell our version of the story and this [the book fair] is a chance to do that,” said Hasan Fneish, the technical advisor of “Dar al-Mawada” publishing house.

Registered in 2015, Dar al-Mawada has been present at Beirut’s book fair since then, with literary materials revolving around the Iran-led “Resistance Axis” and their martyrs. They publish books that deal with the culture around these fighters, and they tell their stories from their perspective, as opposed to the perspective of who killed them, according to Fneish.

“The exhibition is an opportunity to share exactly that with people,” he added. “The painting is merely to market our book on Qassem Soleimani.”

But Safwan explains that politics in its activist form, rather than the presence of the books themselves,is what bothered the group of protesters.

“What they did in that section is that they made it so hard to separate culture from politics, specifically politics related to war and war crimes,” she said.

The bookfair of discord

The Beirut Book Fair has been taking place annually for the last 62 years. “Even during the [civil] war, the [book] fair would open,” the exhibition’s director, Adnan Hammoud told NOW.

While it is normally held in December, the organizers were determined to launch this year’s exhibition both in March and December to compensate for its dormancy as a result of the Covid-19 pandemic, the destruction following the August 4 explosion in 2020, and the wrenching economic and financial crises shooting book prices up.

At least 90 publishing houses participated in the exhibition, including four from Egypt and Syria and 10 from Iran, with a significant absence of Gulf publishing houses and publishers who sell English and French language materials and books. They decided to, instead, given the severe economic crisis, participate in other Arab book exhibitions abroad to amass revenue in hard currency, namely in Muskat, Kuwait and Bahrain, some of which were eventually canceled due to the pandemic, according to Hammoud.

However, many blamed the Iranian influence for the imbalance of representing publishing houses and opted for “Tehran Book Fair” and “Persian Book Fair” when referring to the exhibition.

The fact is that 14 publishing houses, such as Antoine, Samir, The Eastern Library, Estephan, including the publishing syndicate, refused to participate in Beirut’s fair upon invitation, Hammoud said, ”because they opposed the fair’s launch ahead of its standard date”.

“They are free to do whatever they want,” Hammoud said. “We did not want to wait until December to revive Beirut’s cultural life. We want to buy books and we want to read.”

Thirsty for books, the attendance has been remarkable and beyond expectations considering the economic downfall, soaring fuel prices, and the leveling of 60 percent of the exhibition’s establishment by the port’s explosion, according to Hammoud and some participating houses.

“It was a challenge for Beirut,” he added.

Many experts say Lebanon has been a battleground for vying geopolitical schemes where Iran is in the lead, especially after the Lebanon-Gulf diplomatic row, with Hezbollah being its firmest pillar in Lebanon.

“The country’s interests are without any doubt hostage of Iranian interests and geopolitical ambitions,” Mhanna said.”Yet, this should not be an excuse to turn a blind eye to serious mistakes made by Iran’s opponents in Lebanon.”

On the other hand, Hezbollah supporters have been reportedly censoring other people’s work in the country.

It also suppresses freedom of movement and freedom of assembly of their opponents. They are deploying sophisticated online disinformation/bullying campaigns that also contribute to their strategy of censorship, Mhmanna explained.

According to The Daily Star, the artist had tweeted about the incident at the time typing: ”i’ve just been censored. my painting was taken down @BEIRUT ART FAIR – harsh reminder of why I try to avoid these things in the 1st place!!!”

“It did not have any political message, why didn’t they endorse art back then?” Safwan pointed out.

Prior to the recent clash at the book expo, a choir by the name “Bikar”, who were hosted for a musical evening, were harassed into discontinuing their performance as a group of publishers threatened to withdraw from the exhibition if the ensemble carried on with their singing and then disconnected their cables.

Online hate and disinformation campaigns, wielded by networks of Hezbollah supporters, target the party’s critics and opponents with the intent to smear and defame. Lokman Slim, who was assassinated last year in February, was framed as a dishonorable man deserving of his destiny when the late strident Hezbollah critic was accused on social media of collaboration with Israel — a crime punishable by jail time in Lebanon.

The Samir Kassir Foundation was founded following the assassination of journalist Samir Kassir, a vocal and staunch opponent of the Syrian occupation in Lebanon. The foundation, a fierce defender of freedom of speech, reported on a cluster of networks, “the hate network”, which celebrated Slim’s death and were linked to influential Lebanese journalists with big social media following and to Hezbollah supporters who mirror messages of the group’s leader, Hasan Nasrallah.

The party’s proponents had been sending Slim death threats, which were being plastered across his building’s walls, before he was murdered in Lebanon’s south, the Shiite party’s stronghold. Slim had also issued a statement in 2019 holding Hezbollah’s lead commander and his ally Speaker of Parliament Nabih Berri, along with the Lebanese army, liable for his security.

The Lebanese are continuously losing whatever is left of common language, common understanding, common living. They only nominally share the same citizenship. The only solution comes from a serious re-design of the Lebanese social contract and a level playing field, in which no side holds weapons and coercion measures.

Many analysts have seen these actions as tools of suppression and intimidation employed toward anyone who holds counter views that can sabotage the party’s image.

Similar attacks have been directed toward other journalists and activists, namely Dima Sadek, Luna Safwan, Mariam Seif Eddine, and others, who dared to speak out against the militant group or its leader, and who are inured to threats and Hezbollah’s impunity.

“Countering and opposing this censorship is an act of civic resistance,” Mhanna said. “This should be done by creating safe spaces for dissent, not by having other groups replicate Hezbollah’s behavior to defend their own symbols.”

The clash goes much deeper than freedom of expression and is linked to the political dysfunction of the Lebanese system and its connections to the regional turmoil, Mhanna added.

“The solution is, on the one hand, linked to how the Iranian role in the region will evolve, which in turn is very much related to the Iranian regime itself,” he stressed. “On the other hand, it is linked to the disintegration of the Lebanese social contract as long as the country is managed by the current sectarian parties. The Lebanese are continuously losing whatever is left of common language, common understanding, common living. They only nominally share the same citizenship. The only solution comes from a serious re-design of the Lebanese social contract and a level playing field, in which no side holds weapons and coercion measures,” he pointed out.