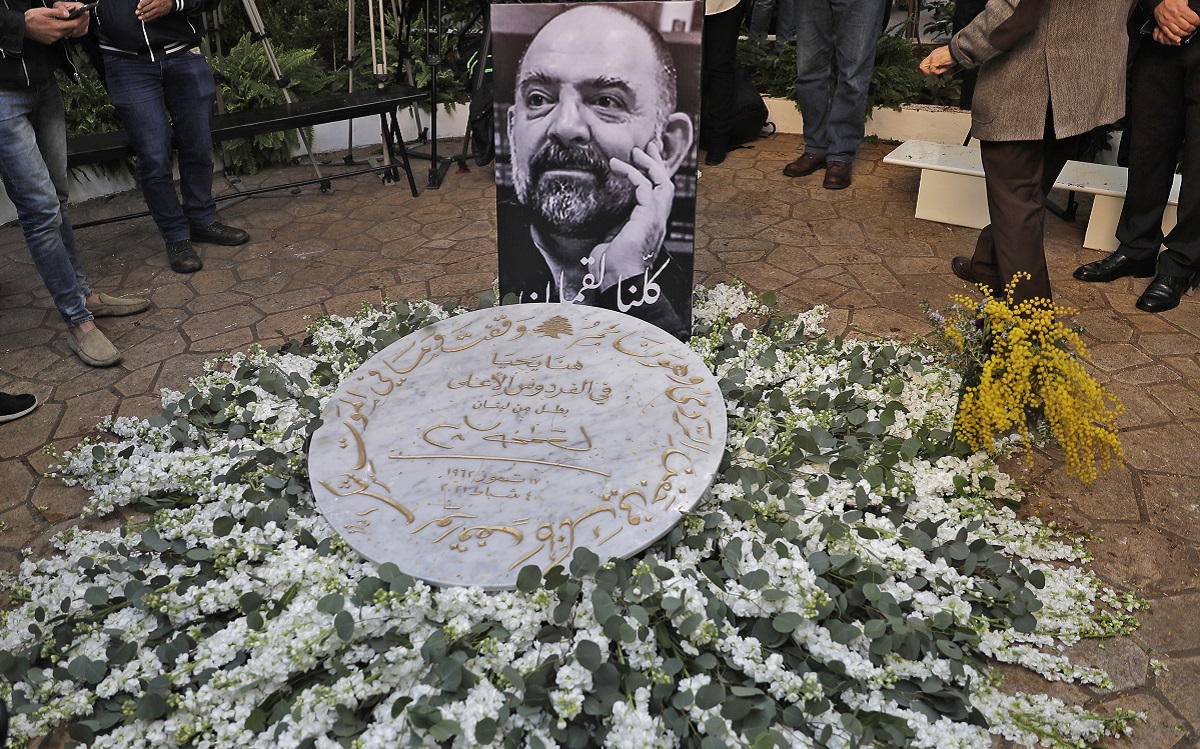 A memorial plaque is placed upon a flower arrangement as friends and family members of slain prominent Lebanese activist and intellectual Lokman Slim (image), attend a memorial ceremony in the garden of the family residence in the capital Beirut's southern suburbs, a week after he was found dead in his car. Photo: Joseph Eid, AFP.

“The loss of some people is in fact a win and a grace that wasn’t expected #no_regrets.”

This was what Jawad Nasrallah, son of Hezbollah’s Secretary-General Hassan

Nasrallah, posted on Twitter shortly after the activist and publisher Lokman Slim, known for his vocal anti-Hezbollah publications and rhetoric, was found shot dead in his car in south Lebanon on February 3, 2021.

But it was followed by hundreds of thousands of tweets and retweets which attacked Slim and accused him of cooperating with Israel, often presenting false evidence or statements taken out of context.

At first glance, it may have seemed like a large public debate on social media platforms about Slim’s legacy and political stances, was in fact a well-coordinated disinformation campaign that was meant to push an anti-Slim narrative, a report published on September 30 by Beirut-based Samir Kassir Eyes media freedom organization reveals.

“Not only was there a network of hate speech around Lokman Slim […] it also revealed a sophisticated disinformation operation involving fake accounts, fake journalists’ names, and an elaborate scheme for a character assassination that preceded and followed the actual, physical killing,” Samir Kassir Eyes executive director Ayman Mhanna told NOW.

The study looked at 187,540 tweets, retweets and mentions, tweeted between January 4, 2021, and March 4, 2021 – one month prior to Lokman Slim’s assassination to one month after. The document concluded that a “hate network” included both influencers – many of them journalists at established media outlets – as well as numerous fake accounts that propagated the messages and accusations against Slim and his family.

The report highlights that there are several factors that raise the suspicion of a coordinated campaign.

Some accounts, a number of which posted a large number of accusations, vanished after the campaign ended and were no longer active when the research was taking place. However, the researcher was able to obtain the content using several social media data scraping tools.

I think that this also raises the question of ethics and the authority in journalism and on social media.
Nasry Messarra, author of the report

Moreover, some of the accounts disseminating accusations and distorted information were “complex usernames that look computer-generated, like Lc5k1aYS56TrcAU, 9eQ6u8Q75ic4leR and G8xnsMLIz5CA8mJ.”

“Some of these accounts are prolific, for example Lc5k1aYS56TrcAU has published more than 10,600 tweets in less than two years of existence,” the report reads. “Peculiar account pseudonyms like MisterX_LB (suspended for violating Twitter rules at the time of this report) raise suspicion in dissecting the hate network. Anonymous accounts with aliases of political leaders or assassinated figures represent part of the tweeting party celebrating Slim’s assassination,” the document adds.

Some users in the hate network had multiple accounts with variations on a name like malak__313m, malak__313m2 and malak__313m3 with no picture or description.

“When you find out that those who were really playing the bad role were journalists, I think that this was sad despite the fake accounts around it. The main influencers were journalists,” the author of the report, Nasri Messarra, head of the Sociology and Anthropology Department at Saint Joseph University and senior expert in digital marketing strategies and communication, stated.

“I think that this also raises the question of ethics and the authority in journalism and on social media.”

Using the algorithm against itself

Social media platforms, such as Twitter, use a system where topics with the most likes or quotes get pushed for visibility, continuing the conversation and increasing engagement and their profit margins.

According to Messarra, this system is focused more on how to increase profits and does not reflect the reality of human behavior.

“Most platforms today just look at the discussion network from a marketing perspective,” he explained.

“They will see that this guy has the most followers or that this guy had the most likes. But, in fact, this doesn’t reflect human discussion because when you look at your society or any other society, people are grouped in cliques and every clique has one or more leaders.”

Usually, you have cliques everywhere interacting with each other but at the same time they have just small groups.
Nasri Messarra, author

“They are small groups with each group discussing one aspect of the issue or the product or the idea,” Messarra stated.

“It’s not usually the biggest ones or the ones who have the most likes who are managing everyone. Usually, you have cliques everywhere interacting with each other but at the same time they have just small groups.”

Messarra found that there was a network targeting Slim, accusing him mainly of being a traitor and collaborator with Israel.

“They don’t just have one big influencer in a discussion,” Messarra stated. “You have several influencers and sometimes a small influencer can become a big one so he can start with his own clique or network and it can spread through the whole network.”

There was also a prepared response for those criticizing Hezbollah for the assassination of Slim. Ironically, the main narrative of the network was to accuse Hezbollah critics of being part of a coordinated effort to attack the Party of God.

One tweet by the account @5gf_mj, which no longer existed at the time of the report, accuses journalist Dima Sadek of knowing about the assassination plan “which shows that it was part of a plan prepared in a campaign and synchronized against Hezbollah.”

The report added that “out of 1,561 users who participated in hateful tweeting against Sadek and Slim, their networks have 222 users in common.”

Both Mhanna and Messarra say that the findings in the report illustrate how important it is for social media users to be wary and careful when they see topics trending on platforms like Twitter as they could unwittingly contribute to the spreading of fake news.

“Even people that are not aware of this can be part of spreading fake news and bad news and helping criminals in a way or helping the people that they don’t want to help,” Messarra said. “The idea here is to raise awareness.”

Although there were plenty of fake accounts contributing to the problem, the two also argued that it was important for journalists to be extra careful when posting or reposting content.

Mhanna added that these findings were a wake-up call “for journalists and free-thinkers to be aware of these schemes when thinking about their safety.”

In addition to this, Mhanna says that it highlights the need for social media platforms to take a more active role in moderating content on their platforms rather than relying on AI as, such as with the Slim assassination, much of it can slip through the cracks.

Not only was there a network of hate speech around Lokman Slim […] it also revealed a sophisticated disinformation operation involving fake accounts, fake journalists’ names, and an elaborate scheme for a character assassination that preceded and followed the actual, physical killing.
Ayman Mhanna, SKEyes executive director

“We’re not calling for censorship on content removal, but for a better understanding of hate and disinformation networks, especially in cases where safety of people and democratic processes is at real risk, and more sophisticated approaches to respond to such risks,” Mhanna explained.

Because of these disinformation campaigns, Messarra says that it is imperative for people to understand how these things occur so that they can differentiate between what is actually happening and what is an organized campaign.

“And I think that taking some meaning out of it maybe would help people realize that it’s not all-natural. It’s programmed. It’s pretend. It’s not like something that comes intuitively. It’s not something spontaneous.”