The dark road to judicial independence

The mysterious death of October 17 activist Faysal Sfeir, deemed a suicide by investigators who wrapped up the probe in a few hours, raises questions over other deaths and also points to the lack of independence of the judiciary, well beyond the Beirut blast probe, Mariam Kesserwan writes. 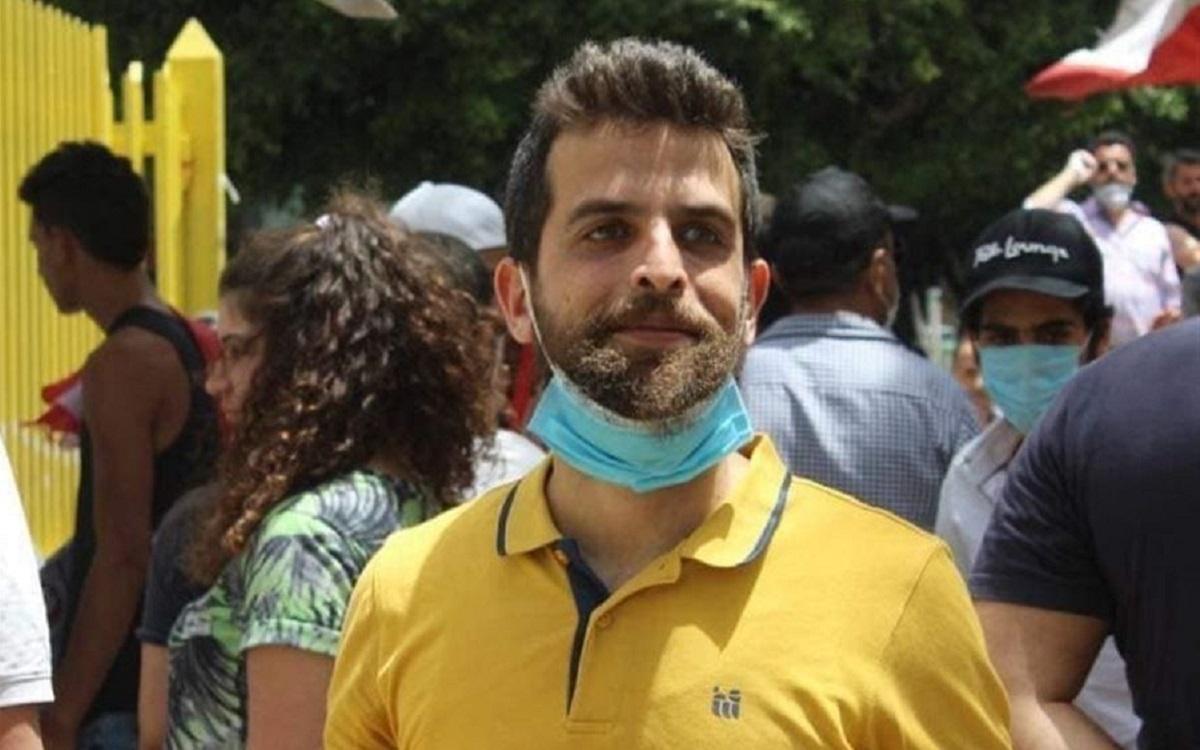 Faysal Sfeir spoke during a rally in front of the Palace of Justice in Beirut.

“All our current disasters, poverty, and thefts are a result of the absence of accountability,” he said.  “Accordingly, we simply demand to pass a law on the independence of the judiciary. We also demand the amendment of articles 70 and 72 of the Constitution that would allow us to overthrow big heads rather than a junior employee, a concierge, or a welder. We will continue this fight until our last breath and we will win this battle the way we won previous battles.”

It was one of his last speeches. Faysal was found dead, shot in the head, on September 10. He had just celebrated his birthday. He had turned 34.

Faysal is gone. It has been more than 45 days.

We weren’t the best of friends, we had our differences. But still, he was part of the thawra movement and he was devoted to its principles. I met him during the earliest days of the revolution. We were not always in agreement, but we had seen each other again and again at the protests. We spoke numerous times on the phone to try to find common grounds on which the various opposition groups that were emerging could cooperate.

Faysal was smart, although I found his way of talking to absolutely everyone without thinking of the dangers too risky. He believed in reaching out to closed communities of sectarian party supporters and believed in transparent negotiations recorded for the audience. He believed in pressuring the other side. I felt that he did not care enough about his personal safety, but he was able to make an impact, and his negotiations did at times bring about change.

The last time we spoke was 3 weeks before his death. It was the day after the Akkar explosion, when demonstrations broke out at MP Tarek Merhabi’s residence in Beirut, and some of the protesters broke into his house. Our friends were arrested, but none of the instigators were. We decided to meet the week after. But the fuel crisis became unbearable and we did not end up meeting.

Faysal Sfeir was the school director of Le Lycée Social, an educational institution founded by his parents, the Jeunesse Global Ruby director,  and the founder and leader of the Ouah (Arabic for “Watch out”) Group of activists during the October 17 uprising. He fought for free education. He was planning to open an orphanage.

His death was a shock to all of us who stood with him in Martyrs Square during the October 17 uprising. He was the fighter, our winner, our strategic mind.

On September 10, a government was finally formed after a 13-month stalemate in Lebanon. It was also  World Suicide Prevention day. Faysal’s death was deemed a suicide.

It happened so quickly. In just a few hours after his death, before any clear professional investigation had taken place, word was out that he had killed himself. Faisal was added to the list of suicides which have been increasing in number amidst the economic crisis and deplorable living conditions.

The justice system that Faysal was pushing to reform could only look at his death for a few hours and deem it a suicide, muting any questions about his passing. The probe ended the next day, before his body was even buried.

Someone like Faysal would never commit suicide. It just didn’t make sense to any of his friends. According to them, he was a man with a vision, a determined person. He was talking about the future, he developed political and civil society strategies. His fight had just begun.

His social media accounts were full of posts where he talked about fighting against corruption and for an independent justice system. He spoke about how we should never give up, and was always encouraging us to believe in ourselves. A screenshot of one of his Facebook posts, published on August 11, went viral: “I win or I learn”.

Teachers and students of the Lycee Social denounced the verdict of the investigators. They shared their personal stories on Facebook of how he used to empower them to overcome weaknesses or difficulties, making them believe in their capabilities, and helping them discover their strengths.

His fellows in the group he created and led were feeling orphaned. The day they found out of his death they gathered in their usual meeting point in Martyrs Square, at the heart of the revolution’s stage,  and sang the anthem Faysal had chosen. “Yes, we will not die, but we will uproot death from our land,” the song says.

There is no way Faysal was even considering committing suicide.

There are many unsolved mysteries surrounding his death. A strange post on his social media was published 2 hours before he died. “I called God but no one loved me”. It was liked by organized foreign bots (mainly Indian accounts) and was boosted by many laughing interactions, before it was noticed the same day at around midnight, and then it shifted to other, more suitable interactions.

Who are they? And why would someone want to boost that particular post, countering numerous voices that doubted his suicide?

Faysal’s house keys went missing a few days before his death. He had always been cautious about his personal things. Also, he was shot at about 5 am, which is when the generator cuts off the electricity in his neighborhood.

What made his death seem even more suspicious was the total absence of the tragedy from media headlines. Neither local TV channels, nor alternative media outlets reported on his death until a few gave in to pressure by activist campaigns that denounced their silence. Some outlets reported it 10 days later. Some confirmed the suicide narrative, despite it being disputed by many activists and friends.

Even social media pages belonging to alternative political parties born from the womb of the revolution ignored the calls and failed to offer their condolences for days.

A mental health NGO organized an event two days after Faysal’s death, on September 12, 2021, to raise awareness about suicide: participants were asked to write messages on balloons. One of the activists who had heard about Faysal’s death attended the event. In a symbolic act of defiance, he wrote on one of the balloons: “Faysal didn’t commit suicide, Faysal was assassinated”.

No matter how different our opinions or perspectives are, not questioning fake government investigations in the absence of an independent judiciary is betrayal, remaining silent over an activist’s death is another betrayal, and delaying the announcement is a dodging of responsibility and a reflection of total neglect.

Over time, some of those who were behind campaigns against negotiating with the current regime turned out to not only negotiate under the table, but had even long been tied to establishment parties or politicians.

On the other hand, Faysal achieved real wins: passing the law that imposes taxes on marine property infringements and legislation protecting the right to education. I wonder what will happen to these wins now that he’s gone.

Faysal’s case is not singular

Abed Abbas, a Shiite activist that had been revolting against the Amal Movement and Hezbollah, had been threatened many times.  A similar scenario of suicide was fabricated when his body was found tossed on the roadside in Costa Brava, South of Beirut, on September 4, 2020, two days after he had gone missing. He had been shot. Faysal died almost a week after Abed’s one-year memorial.

No matter how different our opinions or perspectives are, not questioning fake government investigations in the absence of an independent judiciary is betrayal, remaining silent over an activist’s death is another betrayal, and delaying the announcement is a dodging of responsibility and a reflection of total neglect.

It is difficult to point fingers, however. Noone knows who might have killed Faysal and why, just as no one knows who killed Abed and Karim.

Faysal’s mother was Shiite and his father Christian. He was practicing the Christian faith, but grew up with both communities. Through conversation and communication, Faysal was able to change the minds of many supporters of the Shiite duo, and brought them to the streets on October 17.

Politicians didn’t like him. The marine property infringement law affected many Lebanese tycoons, including high ranking politicians. He pushed for new laws in the education field, he was the leader of Ouah bloc, he was constantly championing free education and defending student rights. He also had enemies among the opposition groups.

Though there has been no credible investigation into the circumstances of his death, there are many people out there who are eager to know the truth, regardless of their motivation. Whether they want to use the truth politically to point fingers at the guilty party or family and friends who lost a leader, a model and a change-maker, they have the right to know.

If it was suicide, perhaps he had been blackmailed or threatened. We doubt that he would have done it  out of his own will.

If it wasn’t by his own hand, we will never know who gave the order, who sent the killer.

The evidence was tampered with, the crime scene altered, the presented evidence handled carelessly.

In the absence of an honest, professional and clean investigation and an independent judiciary, we will never know what really happened to Faysal Sfeir.