As Iranians continue to protest following the death of Mahsa Amini, the response from the global left leaves much to be desired when it comes to supporting the people of Iran, writes Mohammad el-Sahily. 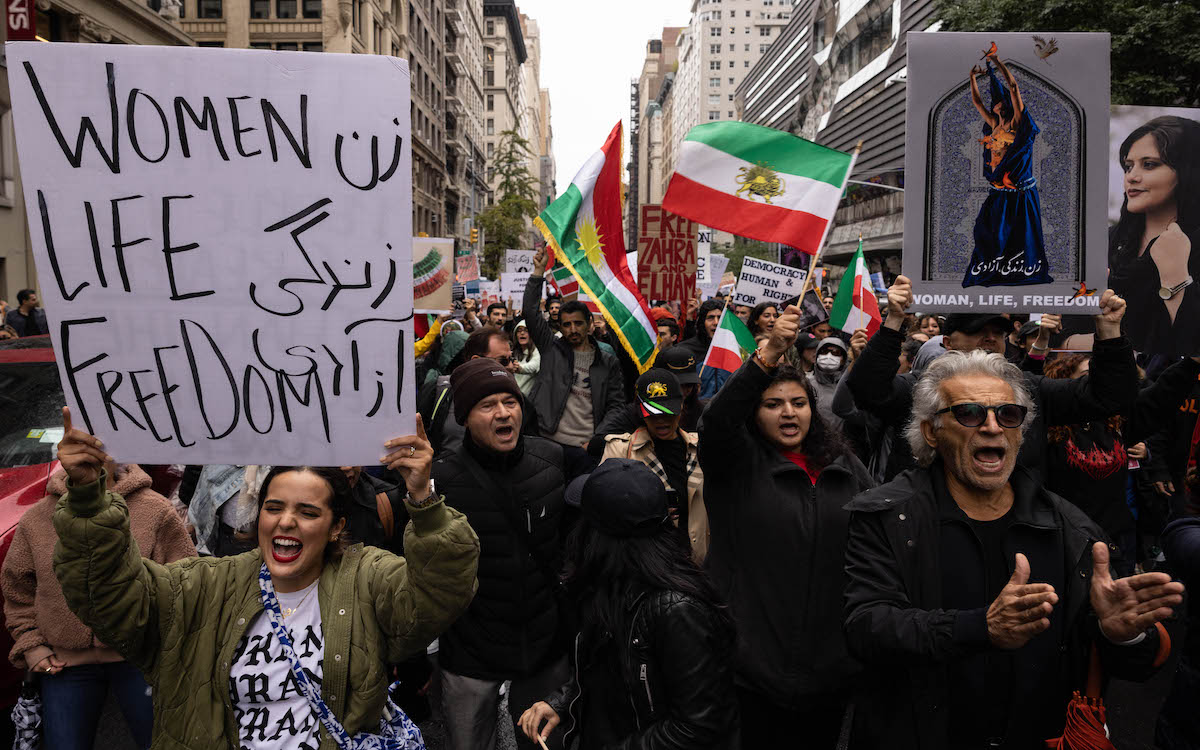 Activists demonstrate against the Iranian regime on October 1, 2022 in New York, following the death of Mahsa Amini in the custody of the Islamic republic's notorious morality police. Photo: Yuki Iwamura, AFP

For over two weeks now, Iran has been engulfed by protests against the Islamic regime, which has been in place since 1979. On September 16th, Mahsa Amini, also known by her Kurdish name Zhina, was arrested by the “Morality Police” of the Iranian regime for not wearing her Hijab in the proper manner, and died while in police custody. Subsequently, nationwide protests erupted all across the country, with unprecedented degrees of ferocity in the government’s crackdown. Until now, reportedly between 60 and 80 people have been murdered by Iranian police while peacefully protesting. All across the globe, Iranians and non-Iranians continue to protest against the ongoing violent repression of peaceful protesters in Iran.

In 1979, a combination of political groups, whose strongest component was the Shia clerics led by Ruhollah Khomeini, managed to topple the Shah of Iran and force him into exile. Initially, Khomeini promised free elections, the end of state oppression, and a multiparty political system in place of the previous autocratic rule of the Shah. However, Khomeini instead implemented a model of government he called Wilayat Al Faqih, or the “rule of the jurist”,  in which the leader of the nation is a renowned scholar of Islamic jurisprudence. The resulting government would go on to enforce Hijab, which had been previously banned under the Shah’s rule, enact vicious persecution of opposition to his regime, establish “revolutionary courts”, restricting the freedom of women, make homosexuality a capital offense, and install theologians and Islamic intellectuals in key government systems.

When Khomeini assumed power in Iran, many prominent anti-imperialists and leftist intellectuals endorsed Khomeini and presented him as the promoter of a new era of popular anti-imperialist and anti-orientalist governance. With an ideological criticism of modernity and the purported “defeat of capitalism”, Michel Foucault, Jean-Paul Sartre, and many other intellectuals hurried to Khomeini’s support. Even Edward Said attacked critics of Khomeini, accusing them of employing an abstract and essentialist view of Islam to evaluate the causes and predicted path of Khomeini’s government.

Backed by this intellectual impunity, and with a belief that its model is the best form of government, the Iranian regime sought to export it to the region. In 1982, on the heels of the Israeli invasion of Lebanon, Shia dissidents in South Lebanon formed a militia that would become Hezbollah, with Iranian training and support, mostly under the aegis of Mustafa Chamran. The new group eventually cultivated a close relationship with the then-ruler of Syria, Hafez Al-Assad. To this day, the Iranian regime continues to support the Assad regime, backing Hafez’s son and successor Bashar in his carnage of Syrian citizens, with the help of Hezbollah. After the fall of Saddam Hussein, Iran would gradually enter Iraqi politics under the auspices of several key players, such as Kataeb Hezbollah and the Popular Mobilization Forces.

The Islamic Republic of Iran has a continuing legacy of regional expansionism and domestic repression in the name of religion, with violent oppression of the slightest sign of popular protests. In 1999, after the closing of the journal Salaam, students in Tehran protested and were met with police violence, with at least five killed. The Green Movement, perhaps the strongest uprising against the Islamic regime in recent times, gained momentum after the dubious re-election of Mahmoud Ahmadinejad as president in 2009, following a sharp decline in popularity due to the rise in human rights violations. The resulting crackdown led to nearly 15 deaths and hundreds of arrests, including Ahmadinajad’s opponent Mir-Hossein Mousavi who has been under house arrest along with his wife since 2011 after he urged people to come out to protest in support of the Arab Spring.

The New Left, which has become a dominant force in progressive politics around the world, has surprisingly broken character and remained either vague or totally silent about the events happening in Iran, and the increasing brutality of the regime. All over the world, the anti-imperialist left, which claims to champion human rights and individual liberties, has not adopted a strong stance in support of the Iranian people’s legitimate demands for freedom and democracy.

Take progressive US House members Alexandra Ocasio-Cortez (AOC), Rashida Tlaib, and Ilhan Omar, colloquially known as “the squad” due to their alignment of views and pronounced criticism of US domestic and foreign policy which they believe jeopardized human rights. Strangely, regarding Iran, their generally pronounced activism is not as prominent as one would expect. After initially maintaining radio silence, AOC tweeted that Mahsa Amini was murdered by “the same autocratic and patriarchal forces repressing women.” She failed, however, to identify who was the perpetrator of this violence in Iran, thus stripping the problem of its political context and failing to identify the culprit. Tlaib retweeted AOC’s tweet, without further comment. Ilhan Omar posted an Instagram story that only rehashed the previous claim, once again without contextualizing the political problem in the Iranian regime’s hellish grip on its citizens. Celebrities like Mehdi Hasan and Ayman Mohieddine have also perpetuated the same apolitical narrative, which represented a radical convergence from previous opinions concerning Palestinians, Afghans, and Syrians.

So-called reformists among the Iranian people have gone public with support for the protests, but without actively calling for the fall of the regime, instead calling for reform and downplaying the structural flaws of the government. To get a sense of what these reformists advocate, one needs to look further into the activities of the Iranian Lobby in Washington. Over the past two decades, several individuals and think tanks have actively lobbied American lawmakers to reach a nuclear deal with Iran, alongside better bilateral relations. One of the main manifestations of this lobby was the National Iranian-American Council (NIAC), co-founded by famous lobbyist Trita Parsi (currently VP of Quincy Institute). As the protests escalated, Parsi retweeted journalist Mehdi Hasan’s take, but he also endorsed criticism of famous Iranian activist Masih Alinejad by retweeting accusations of her being a “war hawk”. Alinejad has been the target of numerous assassination plots herself, and her family remains subject to persecution from Iranian police back home. On the other hand, Iranian political scientist Vali Nasr allegedly met with Iranian President Ebrahim Raisi when the latter came to New York to attend the UN General Assembly, garnering criticism from the National Union for Democracy in Iran (NUFDI). Reformists continue to lobby for a revised nuclear deal with Iran, but fail to understand that such a deal would only give the regime a blank check to continue its repression of its population and expansionist agenda. Activist Negar Mortazavi has also been accused of having an inefficient reformist position on the matter.

Perhaps the greatest expression of cognitive dissonance regarding the recent Iranian protests comes from some Arabs. Iran and its proxies continue to wield massive influence in Lebanon (through Hezbollah), Syria (Iran is perhaps the strongest backer and lifeline of Assad), and Iraq (where Maliki and the PMF continue to obstruct the formation of a government given their minority status in Parliament). Famous Al-Jazeera anchor Faysal Abdel Satir alleged that Mahsa Amini might have committed suicide, while vociferously arguing that the protests in Iran were instigated or supported by the West, and that the Iranian people were loyal to the regime. US-based professor Asaad Abu Khalil, unsurprisingly, argued that the coverage on Iran was only done by pro-Gulf media and journalists, and thus should be viewed with suspicion. He also proceeds to compare support for Iranian protestors and support for Palestinians facing Israeli police, arguing that the latter receives less sympathy and coverage due to Western media bias. When the AUB Secular Club released a clear and political statement of solidarity and support for Iranian protestors, supporters of Hezbollah poked fun at the post, with one of them explicitly saying that the condition of the Iranian women is much better than that of Western women.

This is evidence suggests that the “anti-imperialist” or “new” left is neither anti-imperial nor new. The new left was supposed to prioritize a human-rights-based discourse, which champions the rights of all people, in all aspects of their lives. However, the dominant forces of progressivism appear to be no different than the old, pro-Gulag left. Perhaps modern leftists fail to understand that their jargon fools no one: they are conducting selective criticism of human rights violations based only on the identity of the perpetrator, as is the case when Israel, America, and the EU commit human rights infringements. However, their silence speaks volumes when Russia invades Ukraine, or the Iranian theocracy kills dozens of people and arrests thousands simply because they are protesting. The biggest drawback of this selective activism is sowing seeds of discord among people who are suffering: can we genuinely ask Iranians to support and protest for the rights of Palestinians, Lebanese, or Iraqis if we do not do the same? How will a one-way path of expectation of solidarity work? The left, it would seem, is in need of some heavy soul-searching after the plague of performative liberal activism, which is dangerously lacking in its knowledge of history, and full of praise for non-Western despots simply because they are not Western, and therefore not imbued with imperialism.

Freedom and democracy are universal principles, and the right of self-determination should not be selectively disbursed to some and not to others. The freedom of the Iranian people is ours, literally and figuratively.

Mohammad el-Sahily is a student and activist. He tweets @moesahily.