The Mothers of Lebanon

The families of the Beirut blast victims are carrying a heavy burden, to demand justice not only in the names of their loved ones, but in the name of all victims of assassinations, bombings, war crimes that Lebanon has experienced. 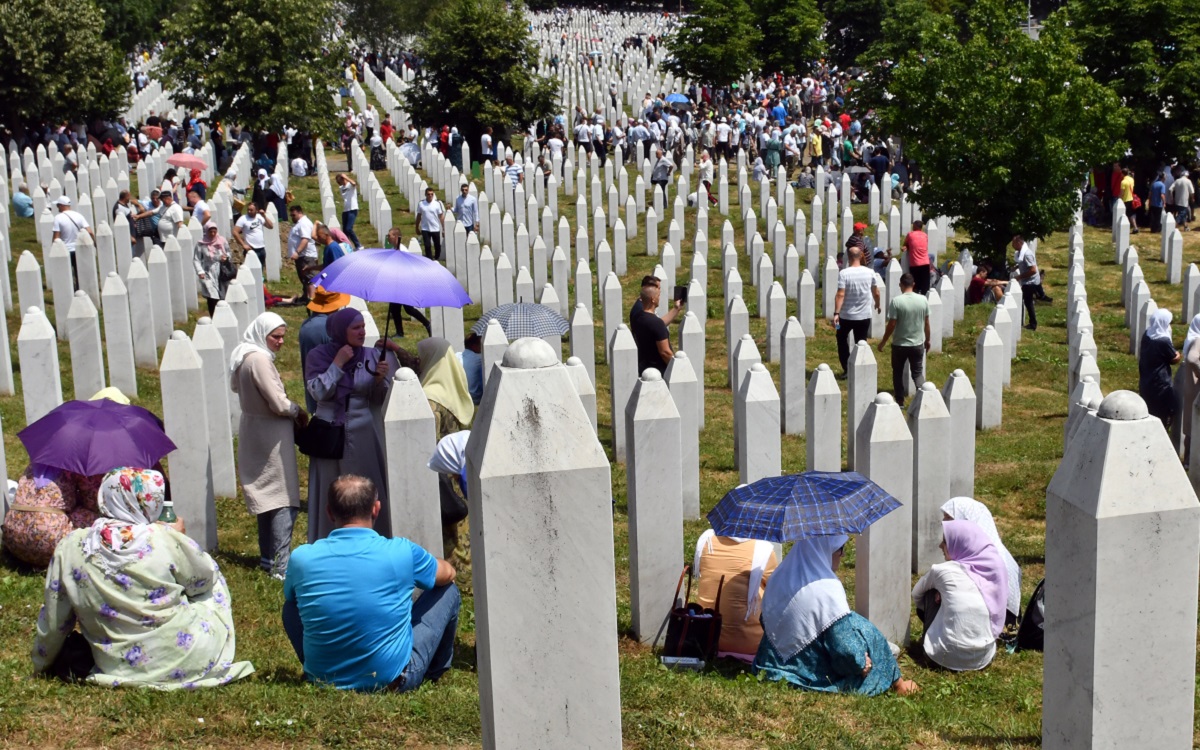 Bosnian women, family members of victims of Srebrenica 1995 massacre, gather prior to the burial ceremony of caskets with body remains of their relatives at the memorial cemetery in village of Potocari, near Eastern-Bosnian town of Srebrenica, on July 11, 2021. July 11, 2021 marks the 26th anniversary of Sebrenica massacre, as during the offensive more than 8.000 Bosnian non-Serbs went missing to be found burried in mass graves, years after the war ended. Photo: Elvis Barukcic, AFP.

I met Therese Sandouk in the spring of 2011. I will never forget her. The image of her through the lens of my camera, sitting on her living room couch, trying to hold back her tears is engraved on my emotional cortex.

Alain Sandouk, her husband, a mechanic who owned a car shop in the area of Chevrolet, died in 2007. He happened to be there when Captain Wissam Eid’s car passed by and someone, we never knew who exactly, blew it up.

Therese was at home and saw her husband’s decapitated body on television. It was in her son’s car. She thought, at first, that it was her son. She allowed herself a sigh of relief when he called her to tell her he was fine. But the next second the grim realization stunned her. Who was the person in the car?

Therese Sandouk’s story, published on NOW a decade ago, was buried under the rubble of the port blast together with our servers and former office.

Several other people died in that bombing that killed Wissam Eid. I later met prosecutor Said Azar’s son. Elias played Majida el Roumi’s “Matrahak be albi” on his piano in memory of his father in January 2011, as we all watched Saad Hariri’s government fall on TV. There had been constant quarrelling over the funding for the Special Tribunal for Lebanon, the only real justice initiative that ever functioned, though not perfectly, in Lebanon. It had at the time formed a Victims Participation Unit, which gave hope to many people, although their assassination cases were not even in the STL’s jurisdiction.

Said Azar himself had survived several assassination attempts because of the cases he investigated. But he died in somebody else’s bombing. His story is also buried in the   rubble, but is as vivid as it can be in my memory. And in his son’s memory.

Linda Daou realized that it was her son in the hospital emergency room when a doctor gave her his necklace and his key chain. He had arrived at the hospital with no identification papers, as the police had already taken them at the site of the explosion for investigation. They wouldn’t let her see him, she says.

“What can I say? I feel what you feel. I lost him at the age of 28, 3 months before your son, also by a bomb. We are losing our innocent children without any reason, maybe for one reason that they were born in Lebanon. Let their souls RIP, maybe they are happier there ……..we all miss our loved ones, let’s always pray for their souls.”

But she understood that something was terribly wrong when her elder son told her to go home. Antoine Daou, Linda’s youngest, was 23 when he died on September 19, 2007 in Sin al-Fil, when a bomb targeting the convoy of Kataeb MP Antoine Ghanem went off. Six people, the politician, two of his bodyguards and three passersby, died in the attack.

Ghassan Daoud, a young lawyer, went to the Sporting Beach Club the day MP Walid Eido was assassinated next to Luna Park, in Manara, on June 13 2007. He never made it back home.

Ghassan’s mother reached out to Tony’s mother when we published the story, telling her she was not alone and showing her compassion and solidarity.

“What can I say? I feel what you feel. I lost him at the age of 28, 3 months before your son, also by a bomb. We are losing our innocent children without any reason, maybe for one reason that they were born in Lebanon. Let their souls RIP, maybe they are happier there ……..we all miss our loved ones, let’s always pray for their souls.”

These mothers were never given the chance to speak up and fight for justice. They were told to pray for their sons’ souls and live with the pain or move on.

Their stories were buried under years and years of bad sectarian politics and political quarrels around whether the Special Tribunal for Lebanon had the right to exist and hunt down the killers of former PM Rafik Hariri.

Hatidža Mehmedović, who lost her husband and both her sons in the July 1995 Bosnia war massacre when Serb nationalist militias killed over 8,000 Muslim Bosniak men in and around Srebrenica, founded the organization in 2002 in the Netherlands. She served as its president until 2018, when she passed away. She was also one of the first Bosniaks to return to Srebrenica after the war, in 2002.

On June 15, nearly 16 years after the massacre, the Netherlands started compensating the victims of the massacre.

On July 11, 1995, when the Bosnian Serb Army captured Srebrenica, Dutch soldiers in charge of security in the UN-declared ‘safe zone’ could not prevent the killings. The Mothers of Srebrenica sued the state of Netherlands for failing to protect civilians and prevent the massacre. After years of trials, in 2019, the Dutch Supreme Court ruled that the Netherlands was indeed responsible, to a very limited extent, for the deaths of approximately 350 victims who were taken from the UN Dutch Battalion’s base in Potocari on July 13 after seeking sanctuary there.

In Rwanda, women drove the transitional justice process after the 1994 conflict, deemed one of the most atrocious in modern history.  They formed lobby groups and pushed for a process that led to the gacaca traditional local courts that managed to try 1.9 million cases in one decade.

But Lebanon has not seen any such solidarity among the survivors of any carnage that has scarred the Lebanese capital over the years.

The mothers of Lebanon were often forced to bury the grief and live with the loss of sons and daughters, pushed aside, sometimes with modest compensation, other times with a discreet, polite threat.

They were silenced by fear that, if they spoke up, they would lose the family they had left.

It was what it was. Resistance had been rendered futile. When in 2010-2011, we tried to speak to the families of victims of several assassinations, many hung up on us. Some who did agree to tell their stories were afraid something might happen to them if they say too much.

In a country where a bomb could kill anyone with impunity, with no interference and no international pressure to solve the murder, where the deaths of passers-by in bombings were seen as fate or bad luck, they knew they would suffer if they demanded justice.

The fight for justice

The Beirut blast killed without discrimination. Ammonium nitrate cared little about sect and political affiliation, residential neighborhoods, social class, education. It ripped through everything in its way, exposing a cluster of incompetence, recklessness, arrogance and lack of empathy that forms an over-entitled political class and an impotent government.

This time, there was no magic cheque that could bury the probe. They could not push anyone aside. All attempts at placing the blame on some foreign conspiracy failed.

The difference between the families of the Beirut blast victims and the families of all victims of all other misfortunes in Lebanon, from political assassinations, terrorist attacks to war crimes, is that the knife cut deep, to the bone.

The victims are many. Too many to silence.  Politicians who refuse to allow justice follow its course will have to look at the victims’ pictures lined up on Beirut’s streets until they give in and allow the probe and trial to take place.

They have to bear that burden. It is on them to finally demand justice. It’s on them to not give up. Because no one, absolutely no one can silence them.

But that is where the difference stops. The fight for justice is not only in their families’ names, but in the name of all the people who have fallen victim to civil strife, to political rivalries, to corruption and incompetence. For all the passers-by and the innocent people who died over decades in bombings and shootings because they had “bad luck” or “that was their fate”.

Their causes are not parallel. They converge.

It’s not an easy fight. It requires determination, awareness, perseverance and, possibly, many years.

It also requires international support and the UN Human Rights Council should approve that fact finding mission that so many rights organizations have requested.

The Mothers of Srebrenica led a difficult fight that took 16 years to reach justice.

The mothers of Lebanon can also do this. Together.