The spring of our discontent

On banks, money, accountability, demolishing the silos, electoral lists and slogans that defy voters’ intelligence. Your weekly roundup from Lebanon, by NOW. 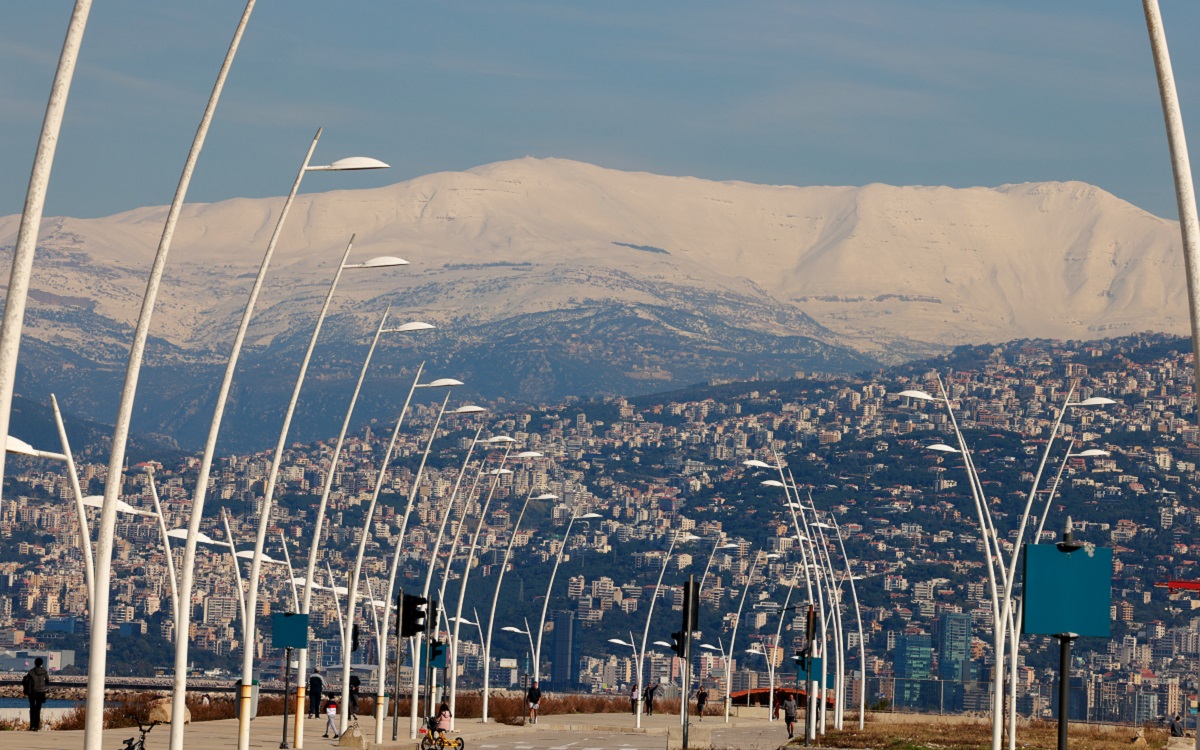 There was an iconic picture that was often used to illustrate Beirut before 2020: the Mohamad Al Amin Mosque in Martyrs Square with Saint George Cathedral right behind it. It was published everywhere from international newswires to the New York Times and on any occasion – Christmas, Easter, Ramadan, Eid al Fitr, protests, elections.

On August 4, 2020, that ceased to be the iconic picture for Lebanon. Now, when one thinks of Beirut, they picture the destroyed silos. They’ve become not only a part of collective memory, but also a marker of identity. Beirut’s Ground Zero, the location of the world’s biggest non-nuclear explosion, stands witness for a people that has lost everything to wars, corruption, incompetence and petty regional politics.

The Lebanese cabinet reportedly decided last week that demolishing the damaged silos is the right thing to do. Conscience is not something to stand in the way of business.

It all speaks for itself if one looks to the past. If they even know how to look to the past.

Mohammad El Chamaa, urbanist and feature writer at L’Orient Today, wrote last year an essay about a similar explosion that happened in 1934. No investigation, no one found guilty. Everything was cleaned, demolished and rebuilt. Erased from the physical ground and the collective memory of the following generations, which were denied the awareness of what may happen if they left hundreds of tons of explosives in a port hangar. Denied knowledge. And it’s clear that the culture of erasure is still alive and well, transmitted through several generations of political dynasties and their political clients.

Interestingly enough, though the cabinet did not make it public in the press release given to the National News Agency, we only found out about the approval of an electricity plan, as we were in the midst of another ice storm in March without any heating. It was more important.

The unfortunate thing is that no one is even talking about the port blast investigation, justice and memory anymore. On Maslow’s hierarchy of needs, Lebanon’s people are placed on survival mode: they worry more about hunger, poverty, security, getting paid real money for their work, and having access to their savings when the banks decide to go on strike. Collective memory, justice, collective mental health and the wellbeing of society in general have become luxuries only people who have enough on the table can afford to think about. That’s the tragedy: when people are constantly hungry, they don’t learn and don’t progress.

Meanwhile, electoral slogans make terribly false promises that the many problems will be solved after the May 15 poll. At the moment, however, as banks go on strike, the agreement with the International Monetary Fund is far from becoming reality, “reform” is just an overused word, and no one talks about any concrete policies – elections remain the only hope on the horizon.

Waiting for this poll to happen is like waiting for New Year’s Eve on the turn of a century. But they’re almost here, less than two months away. Everyone knows it’s a threshold, everyone eagerly expects it to change their lives, but, in fact, nothing is really likely to happen.

And the point is, above everything, that no aid will reach the country if the principles of government don’t change, if there is no accountability. In the words of a friend, if there is no new social contract to guarantee citizen rights, freedoms and security, which is the only way people will trust the state, then nothing will change.

Candidates’ registration ended: The registration process at the Ministry of Interior ended last Tuesday at midnight. Some 1043 candidates registered, out of which only 15 percent are women. L’Orient Today translated the list of candidates by the region in which they are running and their sectarian group.

The electoral campaign, however, has been quite strange to say the least. Some slogans are rather an insult to the electorate’s intelligence. Sociologist Nadim el Kak tweeted a thread with the funniest/enraging campaign billboards he spotted around Beirut.  We translated for you:

Kataeb’s Nadim Gemayel is caught offside, with nothing to say.

Nabih Berri, Leader of Amal Movement and perennial Speaker of the Parliament is my personal favorite:

I find the worst to have Saad’s brother tell me that I have a right water, electricity and a life in dignity, after his family has been (at least had a hand in) fucking it up for the last 30 years!

When this type of political marketing is happening, there are either no funds for a proper campaign, or none of the politicians running for office care about the campaign because it matters little in the electoral process. Or both. In Nabih Berri’s case, it’s rather obvious that he’s not even making an effort, but someone very loyal decided to show his appreciation in this manner.

The brother of the governor: Judge Ghada Aoun on Thursday arrested the brother of Central Bank governor Riad Salameh, both of whom are suspected of embezzlement and money laundering, judicial sources said.

Riad Salameh himself has so far ignored a warrant issued by Aoun.  The Mount Lebanon public prosecutor has turned up the heat on the Salameh brothers and on banks withholding small depositors’ savings.

On Monday, Judge Aoun told the press she has charged the Salameh brothers with illegal enrichment.

But the problem with this investigation is the investigator herself. Ghada Aoun is seen as close to the Free Patriotic Movement and President Michel Aoun. She has been criticized by some and praised by others for indicting only politicians from other political factions, especially the Future Movement. She also came under fire in 2021, when she stormed the offices of an exchange company, accompanied by a crowd of FPM supporters, despite being removed from the case in question.

Meanwhile, Michel Aoun’s son-in-law and current leader of the FPM has been blacklisted by the US Treasury Department since 2020 for taking bribes from Hezbollah while he was in office. Bassil said the listing was a political decision.

It remains to be seen where the new investigations may lead.

Assets frozen, branches closed: Fransabank, one of Lebanon’s major lenders, had its assets frozen after a judge ruled in Thursday in favor of a man who had brought a case demanding the bank reopen his account and payout his deposit in cash.

Judge Ghada Aoun has frozen the assets of six other banks as she probes transactions between them and the central bank.

Banks on strike: The Lebanese Banking Association went on strike on Monday and Tuesday to protest the decision of the court.

Who’s to blame: Writer and analyst Luna Safwan started a thread that turned into a heated debate on Twitter that went on for the entire day on Saturday on who is to be held accountable for the current state of affairs in Lebanon. This Twitter thread is probably the summary of the public debate in Lebanon for the past two years and a half: is it the banks or the political elite?

Hard to say without any real evidence and no credible investigation. From experience with covering prosecuting corruption and the Balkans and CEE for a few years, prosecutors usually start with the smaller fish that are easier to catch. Evidence then surfaces.

The civil society needs to only develop the watchdogs that make sure they put enough pressure for the investigations to not stop here.

Banks in #Lebanon stole depositors’ money. That’s it. Few words are enough to sum up that catastrophe. My parents lost their retirement money, my friends lost years of savings, other parents lost the ability to cover school tuitions. That’s also a crime. Let us not forget.

The region through a fisheye lens

Assad visits Dubai: A surprise visit by Syria’s Bashar al-Assad to the United Arab Emirates opens the door to his isolated regime’s return to the embrace of the Arab world, analysts told AFP.

Why it happened: Badr al-Saif, a history professor at Kuwait University, told AFP that UAE has pushed for Syria’s return to the Arab fold “regardless of the role of the regime in the death and displacement of many Syrians”.

He said the bold move reflects the way the UAE – a wealthy state that has militarily intervened in conflicts in Libya, Yemen and elsewhere – now sees itself as a regional powerbroker.

“The UAE’s self-perception is at the heart of its policymaking,” Saif said. “It sees itself as the leader of the Arab world, where it initiates and hopes the rest will follow.

“Its reception of Bashar al-Assad is best understood in this light.”

What does it mean for Lebanon: Carnegie Middle East Center’s Michael Young answers this question in a piece for al Diwan.

“Syria will want Suleiman Franjieh as president, whose election will be a significant lever in reasserting its sway over the country. To limit Syria’s reach, Hezbollah and Iran may prefer a Gebran Bassil presidency, and are doing everything possible to ensure he is successful in the upcoming parliamentary elections. If this creates tensions, Syria and Iran may opt to find a middle ground with a third candidate,” he explains.

Sarde after Dinner had filmmakers Joana Hadjithomas and Khalil Joreige as guests. The episode is here.

The Happy Hour Show’s Ramzi Abou Ismail spoke to economist, strategist and Executive Chairman of Kulluna Irada, Albert Kostanian. They talked about the role of the advocacy group in elections, possibilities for reform and what to expect in the upcoming elections. Watch and listen here.