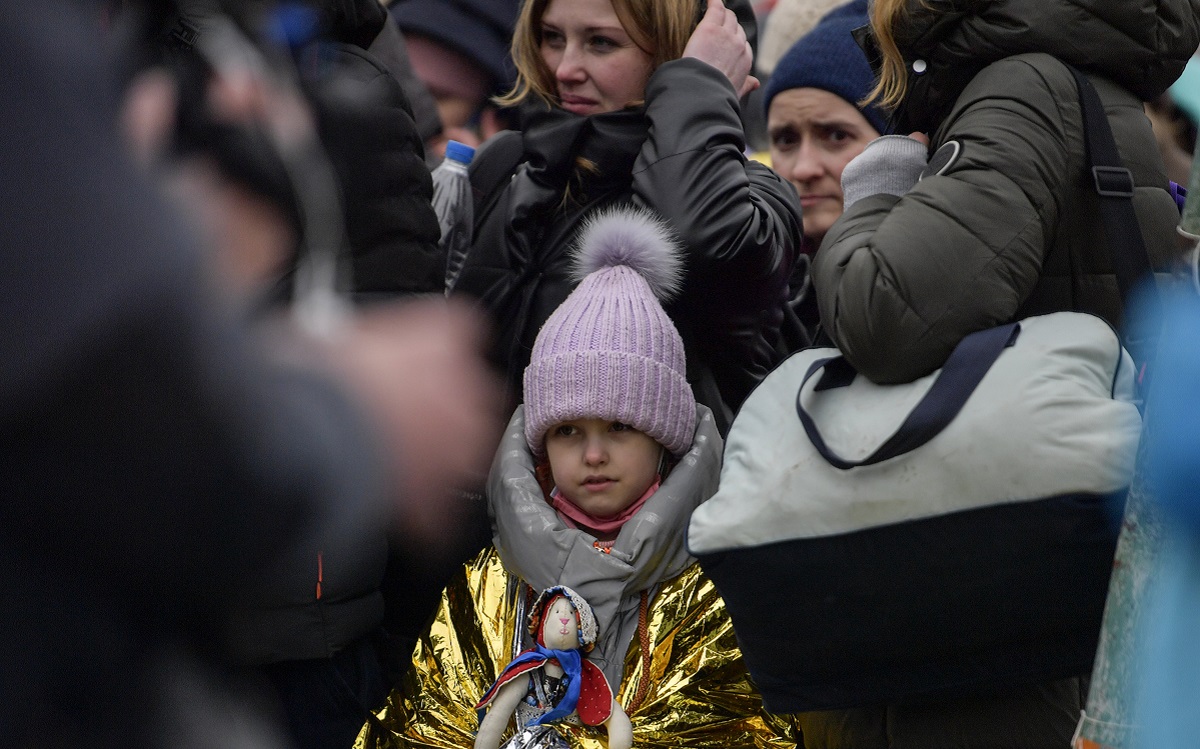 Refugees wait in freezing cold temperatures to get on bus, after crossing the Ukrainian border into Poland, at the Medyka border crossing in Poland, on March 7, 2022. More than 1,5 million people have fled Ukraine since the start of the Russian invasion, according to the latest UN data on March 6, 2022. Photo: Louisa Gouliamaki, AFP.

There was a war, not too long ago, that also took place on social media. In a situation of media blackout imposed by Bashar Al Assad’s government in 2011, Syrian opposition groups set up a network of citizen journalists who provided footage and information on victims, allowing international media access to some information from the ground.

I met two of these citizen journalists in 2011, both from Homs and in their late 20s, in a house located in a village in Akkar. They worked as a small news agency gathering footage, verifying information from several sources and then posting on social media.

My housemate at the time was a journalist working with an international news agency and she often voiced her frustration in terms of what she was allowed to do when covering the Syrian war. Editors kept rejecting her stories on massacres and bombings because there was no way to verify information coming from Syria on social media, she told me. Many war crimes and many instances of use of chemical weapons remained uncovered by international media because the only proof we had was people’s testimonies and footage spreading on Twitter and some Facebook pages.

Much of Syria’s fate was decided then and there. Western editors did not trust Syrian citizen journalists, and by the time Elliot Higgins founded the Belling Cat and formed the team that looked into metadata and was able to verify footage and do digital forensics, technically opening up the minds of editors across the world, it was already too late for Syria.

Yet, for Ukraine it was not at all late. Noone questioned much the origin of the social media footage and there was plenty of coverage from the field. It remains to be seen how we are going to cover Russia in a situation of media blackout by relying on information posted on social media by opposition activists using proxy servers and VPN.

But there are many lessons to learn from this story. One is that journalists and the editorial decisions they make can change the fate of many. Another is that editors are human and they come with their own biases. Trust or mistrust is a decision one makes at a personal level based on a cultural baggage people come equipped with. Many editors did not understand Syria as they understand Ukraine, they did not trust Syrian citizen journalists and opposition activists the way they trust Ukrainian citizen journalists and Russian opposition activists. It’s cultural proximity that decides what gets covered and how and that is where the difference is.

In many cases, this is a consequence of racism. International media is also very much Western-based and that makes it tributary to Western culture and Western values. The war in Ukraine is differently reflected in media in other parts of the world, but we don’t see that coverage, because we only look at what we deem “international media” or media in the region we live or we feel culturally closer to.

It’s indeed sad that in 2022, with all the access to information and education, we are still tributary as human beings to the same old tribal rules of trust and cooperation. People tend to trust, cooperate with and help the people that are similar, culturally closer, or whose culture and society is understandable to them. Journalism too is tributary to this law of proximity.

What is worse is that the most blatant and racist statements I have heard come from people who should understand cultural differences and who could have digested them before opening their mouth on camera or before writing a piece. Also, this goes back to the way “international media” is hierarchically structured to favor and trust journalists who were born and/or schooled at the center and dispatched on a “field”, rather than local journalists who know the local culture and can explain situations in better terms. It’s not racism in terms of skin tone, it’s cultural racism.

People at the center don’t need to make that effort. We do.

War in Ukraine and the Middle East

A looming wheat crisis: If the Russian war on Ukraine is prolonged, Lebanon could face wheat shortages starting July.

The solutions are not easy to find. Lebanon has no more storage facilities after the Beirut port blast destroyed the silos. The government, struggling to find the money, needs to secure a different provider, possibly Ukraine’s neighbor Romania, according to Economy Minister Amin Salam.

Regional food security prospects are not optimistic, as governments have long had policies that do not encourage local production of wheat, in many cases as a result of international financial institutions imposing conditions on loans. Samara Azzi explained the mechanism in a piece we published on Thursday.

A new fuel crisis: Long queues have also returned to fuel stations over the past weekend in Lebanon, while top member of the Lebanese station owners syndicate, George al-Brax, reassured that there is no gasoline shortage in the market.

Energy Minister Walid Fayyad warned that inspectors, escorted by State Security agents, would begin raiding stations to make sure they are abiding by the official prices and that they are not withholding their stocks from consumers.

Returning home: Scores of Lebanese students in Ukraine made it home during the past week, with the latest plane landing on Sunday from Warsaw. For those who wonder why so many Lebanese students opt for Ukrainian universities, see the Lebanese economic crisis unfolding in the past two years. Western Universities are expensive and life in Western capitals has also become hard for Lebanese students whose families are barely able to send money in foreign currency abroad. Ukrainian universities and others in other Eastern European countries provide cheaper education and less expensive living conditions.

A debate that rings home: The UN voting on condemning Russia for the invasion of Ukraine, as well as the EU and US slapping sanctions on Moscow stirred a larger debate on how effective the sanctions really are looking at Syria and Iran. NOW’s Sally Abou Al Joud spoke to experts on various regions, including Eastern Europe, Iran and Lebanon, to find out what has worked in the past, what hasn’t and what can be done. Read the story here.

Postponed: The Cabinet on Friday decided to postpone the municipal and mayoral elections for a year, as it formed a ministerial panel on food security in connection with the war in Ukraine.

MTV said the decision to postpone the municipal vote was taken due to a lack of financial resources and manpower.

“It suggested that it be held on May 31, 2023, and the suggestion will be referred to parliament to take the appropriate decision,” the TV network added.

Bad news for the opposition groups: Twenty civil society associations issued a statement condemning the government’s proposal to postpone municipal elections. Opposition groups are most affected by the decision, as they found it easier to run, campaign and win at local level, in communities that they know.

Centers and megacenters: The Cabinet has formed a ministerial committee to study the possibility of setting up voting megacenters in the upcoming elections, after a study prepared by the Interior Ministry failed to convince President Michel Aoun. The financial issues are overwhelming in Lebanon, but also across the world, as embassies and consulates that should be hosting electoral centers have no funding and the Ministry of Foreign Affairs has trouble even with paying diplomats.

More candidates: Kataeb’s Nadim Gemayel seems to have overcome his differences with his cousin, Samy, and will be running after all in the Achrafieh district.

Thawra groups in Baalbeck announced a list for the Bekaa III constituency, in the past dominated by Hezbollah and its allies, Amal Movement and SSNP.

The Lebanese Diaspora Network has launched a  series of web meetings taking place every Tuesday where candidates from various opposition factions get to speak to Lebanese voters abroad.  Last week’s candidates were from Sabaa. The recording is here.

The National Front’s Baabda candidate Michel Helou explains in an interview his switch from journalism to politics. The video is here.

A loss for all of us: 24-year old cancer patient and activist Fawzia Fayad passed away last Thursday. She was one of people who spoke up on how the shortage of medicine for incurable diseases would kill many patients in Lebanon.

Murder in Mansourieh: Hubert Fattal, CEO of the Fattal distribution group, was found murdered, stabbed in his home in Mansourieh. The Lebanese security forces arrested two Syrian nationals on Monday.

Speaking of sanctions: The U.S. Department of the Treasury’s Office of Foreign Assets Control (OFAC) has designated two “key Hizbullah financiers” operating in Guinea, a statement said on Friday.

Poverty is more complicated than one would think: Lebanon has always hosted a large population that lives from hand to mouth, contrary to the country’s projected image of relative wealth and joie de vivre, Synaps’ Rosalie Berthier writes. Follow Synaps on Twitter, their pieces are a must-read.

A bookfair like no other: The Beirut Book Fair closed down for the day on Monday after a brawl started when a picture of the former Iranian Revolutionary Guards commander Qassem Suleimani was posted at one of the stands and an activist tried to remove it.

Podcasts: Ramzi About Ismail spoke to Michelle Tueni on The Happy Hour Show, candidate for the Baabda seat in the upcoming elections. The recording is on Youtube.

Ronnie Chatah had an exchange, as he calls it, on The Beirut Banyan with one of the most passionate Lebanese federalists, Yiad Boustany. The episode is here.