HomePoliticsInterviewWhat we don’t know could hurt us
Interview
Adam Muro

What we don’t know could hurt us 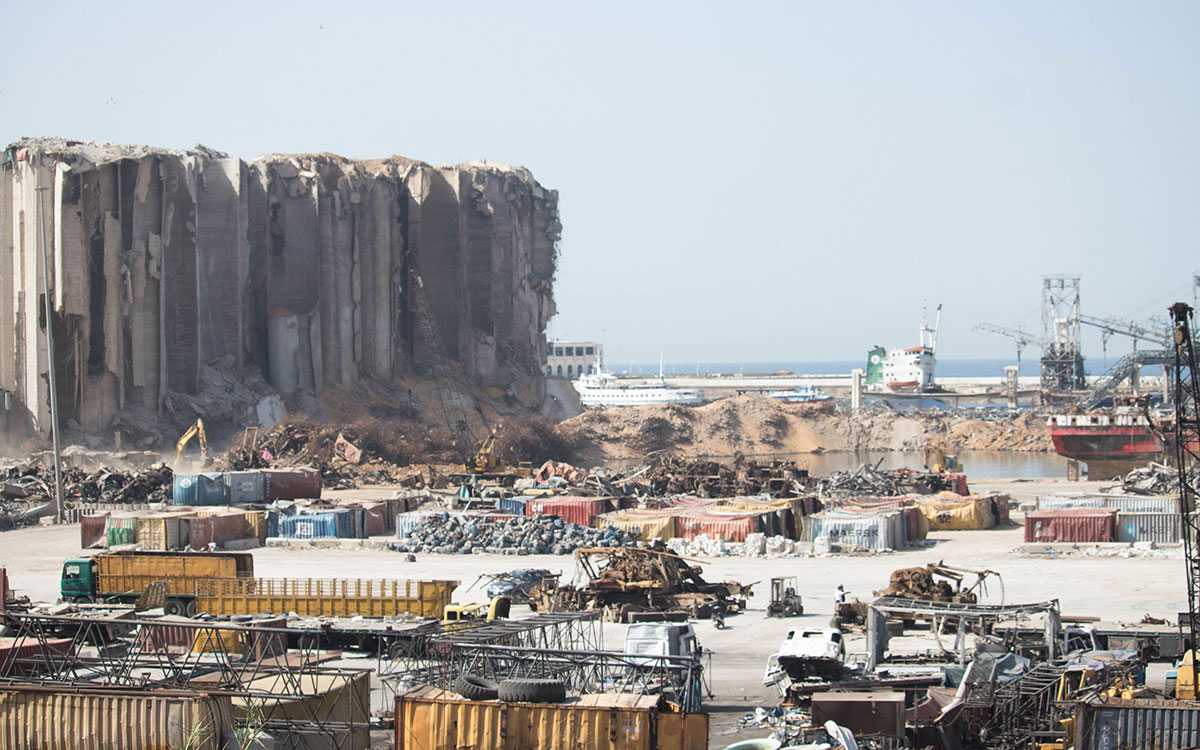 The chemicals that had been stored in the Beirut port before the blast can still prove dangerous for the city’s residents but lack of transparency makes protecting the population very difficult, Greenpeace MENA’s Julien Jreissati says. PHOTO: Nicholas Frakes, NOW.

Greenpeace MENA's Julien Jreissati speaks about the unknowns that will determine the Beirut blast's long-term impact on public health and the environment.

Six months have come and gone since roughly 2,750 tons of ammonium nitrate exploded at the Port of Beirut, causing a devastating blast that tore through Lebanon’s capital city, killing hundreds and wounding thousands.

Rightly presuming the lack of any apparent emergency relief from the state, initial response efforts saw a beautiful coming-together of Lebanon’s citizens: victims, friends, family and neighbors, established and brand new civil society groups, united under a common banner of picking up the pieces and ensuring public safety.

When the panic was over, it was time to start thinking ahead. What exploded, who was responsible, and what would the long-term effects on the people and the environment of Lebanon be?

For Julien Jreissati, program director at Greenpeace’s Middle East and North Africa division, the real danger has always been in these unknowns, both on August 4 and in the present day.

“For me, the biggest worry as an environmentalist was what we do not know, and not what we know. Because what we know, we directly provide information on, we can try to protect ourselves,” he said, recalling the day of the blast. “Our biggest worry is, we actually don’t know what exploded with that [ammonium nitrate], we don’t know what’s around.”

Jresissati’s worries are not unfounded.

The ammonium nitrate explosion and subsequent fires at the port were bad enough on their own, hurling large quantities of NOx into the air, a gas which can cause eye, skin and respiratory irritation, and can cause heart disease and even cancer when its presence is chronic.

Luckily, according to Jreissati, that danger passed relatively quickly.

“When it comes to this specific explosion, it was acute. At the moment, people exposed were suffering from this irritation but it was dispersed quite fast.

As soon as the fire was put out, I think it was the next morning, everything dispersed,” he said.

The real problem is what exploded at the port that day along with the ammonium nitrate.

The Port of Beirut has a dirty history of playing host to criminal toxic waste importation schemes, dating back to the late 1980s.

In 1988, during the Lebanese Civil War, senior members of the Lebanese Forces, a Christian militia at the time, were paid $22 million by business interests and the mafia in Italy to import over 15,000 barrels of waste and hazardous chemicals, including expired medicines and old paints.

The barrels were dumped into quarries and even sold to industry in Lebanon for reuse, subjecting untold numbers to the deadly compounds they contained.

The exposure of this by Lebanese media and Jreissati’s predecessors at Greenpeace caused a major scandal, and led to cover-up efforts by the government that included threats and the detentions of activists.

The Italian and Lebanese governments eventually admitted defeat, and a clean-up got underway, lasting into the late 1990s.

Two more incidents are known to have occurred in Lebanon, in 1993 and 1996, before the Basel Convention, an international treaty designed to stop the international toxic waste trade, took hold, and the transnational movement of dangerous outdated chemicals trickled to a halt.

But, according to activists, a full accounting of all of the hazardous materials at the Port of Beirut was never completed.

Indeed, just days after the blast, French and Italian officials surveying the wreckage reported the discovery of 20 shipping containers full of dangerous chemicals.

Again, in February 2021, an official of German firm Combi Lift, tasked with surveying the port and removing toxic waste, reported that his team had found and treated 52 additional containers, full of a hellish mixture of chemicals that he said could have caused a second devastating explosion.

Activists speculate these chemicals had been sitting there for decades, corroding their containers and waiting to be discovered.

And that’s just what has been found since the blast. What other chemicals were atomized into the air during the explosion?

“We don’t know,” explained Jreissati. “Even what was in the hanger with it [the ammonium nitrate], and all this time if something was leaking into the water, into the sea, or evaporating, all this. We just don’t have information, and this lack of information is the biggest threat.”

“There is definitely a level of obscurity,” he continued, “and the fact that these [containers with chemicals] have been there for decades, it shows that there is definitely incompetence, but also maybe there is a will to hide things.”

In the immediate aftermath of the blast, the people of Beirut sprang into action, forming an impromptu camp near the railway station in Mar Mikhael and beginning the process of treating the wounded and clearing debris.

Under ideal circumstances, remnants of a chemical explosion should be sorted on site to figure out what is recyclable and what can’t be salvaged, and more importantly, what sort of residue remains amongst the wreckage.

According to Jreissati, civil society groups coordinating the clean-up had begun this process before the government stepped in.

“As you know, the military took over,” he said “[They] were using big Caterpillar trucks to just amass everything and move it.”

“When we started seeing this big truck of debris being thrown where we, the people that were there, were cleaning, it really messed up everything, not only creating dust. And people were poorly equipped, they had just simple masks.”

He said this dust most likely contained asbestos from the destruction of some of Beirut’s old buildings, along with other chemicals.

His team at Greenpeace worked to secure KN95 masks from their colleagues in Germany, and to educate relief workers on their proper use, amazed that none of this vital information was coming from official sources.

“NGOs try to fill the gaps left by the government,” he said with a sigh.

Then, inexplicably, the debris started being removed. No survey of its contaminants was completed, and activists do not know where it was taken and dumped.

“I think when the military took over, I think this is where the thread got lost. Because everything became very, ‘a matter of national security,’ and so forth,” Jreissati said.

Without being treated, and without being dumped in a sanitary landfill (which Lebanon does not currently have), this debris has the potential to impact public health and the environment for years to come.

Chemicals leaking into groundwater, into aquifers and non-renewable water for example.”

“We just don’t know. I mean this is completely a lack of responsibility, things are just dumped right and left, we don’t know what’s in them. All kind of potential environmental damage could come from this,” he said, exasperated.

For me, the most important part is being completely transparent about what happened. We want information, from all fronts, but [especially] from the environmental and health front. This is what we require. We don’t have this.

Attempts by Greenpeace and other activist groups to locate the dumping grounds for this waste have all hit a dead end, and therein lies the problem: opacity.

There is a suspicious lack of information coming from the government. There is a deafening absence of information regarding the location of the debris, what hazardous materials might still be at the port, what is leaking into the ocean or destined to explode, and of course, the matter of the actual investigation into who is responsible for the blast. Investigations into these matters have been impeded by political roadblocks time and time again.

“For me, the most important part is being completely transparent about what happened,” said Jreissati. “We want information, from all fronts, but [especially] from the environmental and health front. This is what we require. We don’t have this.”

With time and pressure, he said, the government will hopefully come to realize that it is in their best interest to work to secure the environment from further degradation.

“We’re miles, miles behind,” the activist continued. “It’s not for the environment’s sake, it’s for the overall system, it makes it much more sustainable, and obviously much more beneficial for everyone.”

Adam Muro is a freelance journalist based in Beirut. He tweets @adamkmuro.