Some families of the Beirut blast victims may have been intimidated by the October 14 clashes, judging by the change of heart of the group’s spokesman who announced his resignation and support for Hezbollah. 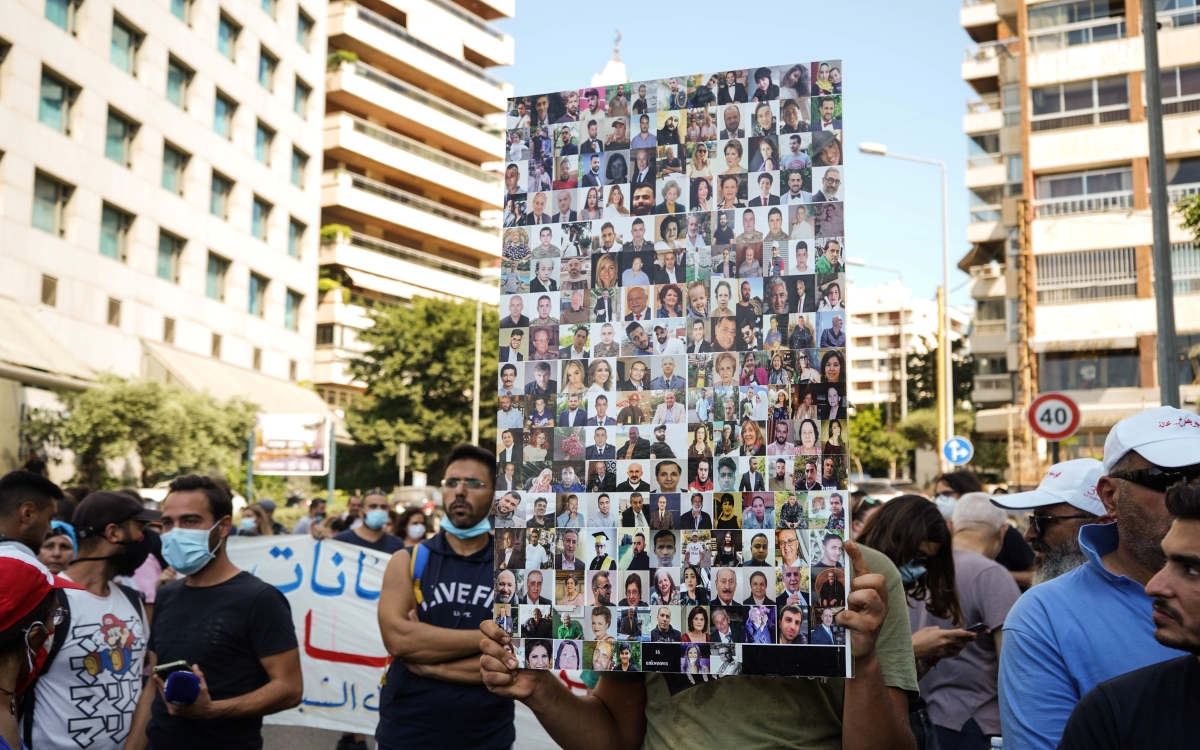 Beirut blast victims' families during a protest in front of the UNESCO Palace in Beirut, which currently hosts the Parliament meetings. Photo: Dana Hourany, NOW.

We have a saying in Lebanon: “before the sa7sou7 and after the sa7sou7“.

A sa7sou7 is a dope slap, a smack on the back of someone’s head when they say or do something seen as out of line.

It became quite a popular expression used in the Lebanese Shiite community to describe the change of opinions one undergoes after being threatened by one of the two Shiite parties, Amal Movement or Hezbollah.

In the Lebanese media, we are accustomed to seeing individuals d express their anger against Hezbollah in particular, at times even employing violent speech. And then, suddenly, they take back what they said, and publicly release official apologies.

The story goes as follows: citizen A says something spontaneously against the Secretary-General of Hezbollah out of anger and frustration.

The next day, the same person releases a statement surrounded by photos of Hezbollah Secretary-general Hassan Nasrallah whilst holding one themselves. With a shaky, almost inaudible voice and a reverent demeanor, they express their support and love for Hezbollah and commonly use the phrases “we are under your shoe”( Nehna tahet sobatak) or “we apologize to your shoe” (mne’tezir men sobatak).

What happened in between the initial statement and the following apology always remained a mystery. But it’s the sa7sou7.

Opposing Shiites are “smacked” into silence, the fear of violent retaliation always looming.

Another common joke within the community is that of a black “Envoy” four by four arriving to kidnap the culprit once something is said against Hezbollah.

From kidnapping to physical violence, the jokes may be funny, but the intimidation is real.

Opposing Shiites are “smacked” into silence, the fear of violent retaliation always looming.

I have met and interviewed Ibrahim Hoteit many times. He was dynamic, driven, determined and outspoken.

The man in his 50s – 60s, brother of Tharwat Hoteit, one of the victims of the August 4 Beirut Port explosion, and previously the spokesperson of the families of the victims, recently underwent a radical change of heart.

He used to take the lead and speak on behalf of the families of the Beirut blast victims at every protest. He was on television almost everyday, with the Beirut blast investigation being debated by activists and politicians alike.

“With the judge till the very end” was a phrase he used commonly until last Friday night when he released a video that immediately went viral. In the video, he stated that he no longer supported judge Tarek Bitar, the lead magistrate in the investigation, and called on him to quit the case. He also criticized “America’s interference” and expressed his support to Hezbollah.

The video came as a response to the clashes that occurred in the Tayyouneh area following a protest planned by Hezbollah and Amal supporters. Seven people died, including two bystanders, and 32 were wounded. The worst fighting Beirut has seen since May 8, 2008.

Hoteit’s change of heart worried many. It looked like intimidation. This was definitely not the first time Hezbollah and Amal were accused of threatening activists, and Hoteit himself had admitted to previously receiving threats during the families’ protests.

“If any harm was to happen to me then it’s on Nabih Berri,” I once heard Hoteit say during a protest I was covering.

Hoteit then backtracked on his statement in a recent interview, claiming that his words were simply the result of being in the heat of the moment.

“We still cling to our stance and the trust we gave the judge and our case is much bigger than sectarian, authoritarian, and political feuds,” some of the families said in a statement on Sunday.

But there are others who, like Hoteit, have been reduced to silence, fearful, and intimidated by the October 14 show of weapons in Tayyouneh and Ain el-Remmaneh.

Yesterday I tried to reach out to members of the families of the victims, several of which I had spoken to many times before. They were all hesitant to talk to the press.

The Beirut blast case should be a priority above all feuds. But the apparent steadfastness of Judge Bitar has politicians desperately meddling, starting with what they do best: dividing people.

In July, when families were protesting outside Parliament Speaker Nabih Berri’s house in Ain Al-Tineh, Beirut, Hoteit himself addressed Berri, starting his statement with “Your Excellency”. Other protesters asked him to stop using honorifics.

On that day, there was an altercation between the families of the victims and their supporters and the army.

“You will pay heavily for these actions, Nabih Berri. I, Ibrahim Hoteit say so.”

Fast-forward three months, Hoteit recently said in an interview that he didn’t have any particular political bias and didn’t belong to any group.

There are others who, like Hoteit, have been reduced to silence, fearful, and intimidated by the October 14 show of weapons in Tayyouneh and Ain el-Remmaneh.

This issue divided the families into two groups, the pro-Bitar and the anti-Bitar. The “us vs them” narrative, that the politics of the country was built on, seemed to have spread its venom to this cause too.

A source close to the families who wished to remain anonymous told me that all the WhatsApp groups that they used to communicate on were now canceled, until further notice.

“Ibrahim said he didn’t want to be reached at the moment,” the source said.

This division highlights the issue of unity amongst the members of this group and raises the question of what will happen if more people give up, or are forced to give up, like Hoteit did. Looking at things through a sectarian lens, as most political parties want us to do, members of the Shiite sect face harsher consequences for their speech against the political duo than the rest of the families.

With the absence of strong opposition in the government, Hezbollah remains the dominant group in the country, together with its ally, the Amal Movement.

They can silence anyone they want, however they want.

The October 17 revolution challenged that abuse of power. Therefore, the political duo used their supporters many times to beat up protestors, sometimes even attacking and burning their tents.

While the country was celebrating the two-year anniversary of the revolution, Amal Movement supporters prevented the celebration in Tyre’s Al-Alam Square on Saturday night. They attacked protesters in the square and chose to hold a funeral for the victims that fell during the Tayouneh clashes last Thursday in order to disrupt the celebrations for the uprising’s anniversary, prompting protesters to cancel their sit-in.

Whether Hoteit was truly under duress or speaking out of sheer conviction, it remains undeniable that the clashes, mixed with the whole debacle around the integrity of the judge, adding Hoteit’s resignation, all led to one thing: distraction from the Beirut blast case and the ones responsible for it.

Could Hoteit be an example of that abuse?

He says he’s not. He blames Thursday’s clashes and the judge for his 180-degree turn.

“The only thing I’m afraid of is the future of our country if clashes like these occur again,” he said.

His reasoning for no longer siding with the judge was that he felt the clashes happened because of their case, and that the judge, who knew 90 percent of the truth, refused to say it.

“Judge Bitar told me that he knew almost all of the truth but he didn’t want to say it yet and his reasons did not convince me as I have other issues with his method of work as well.”

Claims like these frame the judge in a negative light. Whereas before politicians were attacked for obstructing justice, the judge now would be attacked for withholding the truth.

Hoteit’s concern over further violence and bloodshed in the country is legitimate. After losing a close family member in the explosion, one wouldn’t wish this type of grief on anybody else. He also said that he felt that the port blast case was responsible for the Thursday clashes. So when choosing between civil peace and a judge, the choice seemed obvious.

Whether Hoteit was truly under duress or speaking out of conviction, it remains undeniable that the clashes that left 7 dead and 32 wounded may have pushed some of the people militating for justice and accountability to feel guilty for what happened or to fear further violence.

Mixed with the whole debacle around the integrity of the judge and Hoteit’s resignation, it all led to one thing: distraction from the Beirut blast case and the ones responsible for it.