Another crisis on the horizon

With time quickly running out for Najib Mikati to form a new government before Michel Aoun’s presidential term ends, a constitutional crisis is looming as the political back and forth puts Lebanon at risk of being plunged further into collapse. 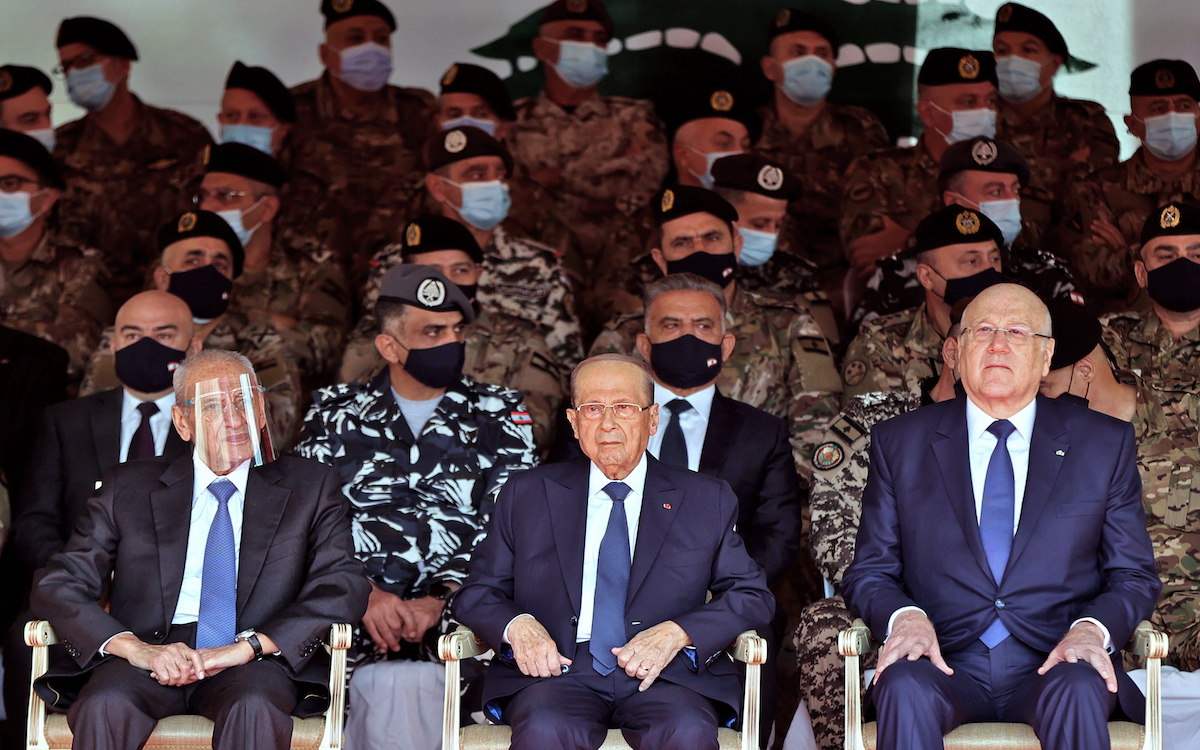 Lebanese President Michel Aoun sits between Prime Minister Najib Mikati (R) and Parliament Speaker Nabih Berri during a ceremony marking the 78th anniversary of Lebanon's Independence Day at the Defense Ministry in Yarzeh on the eastern outskirts of Beirut on November 22, 2021. Independence Day commemorates the end of the French Mandate in Lebanon in November 1943. Photo: Anwar Amro, AFP

Prime Minister-designate Najib Mikati emerged from his meeting with Beirut’s Greek Orthodox Metropolitan, Elias Aude, hopeful that he will be able to form a new government soon.

“Things are positive regarding the formation of the government, which once formed will continue what the current government had started,” Mikati told the press while leaving the meeting.

Mikati was indeed making progress with forming a new cabinet following the May 15 parliamentary elections.

There is a good reason as to why Mikati proposed practically the same government to Aoun just one week after he was tapped once more to form a government. Aoun’s six-year term as president is coming to an end in October and, without a president, Mikati’s new government can not gain approval until a new president is elected, which could take a prolonged period of time.

This is why many political leaders in Lebanon are constantly urging the prime minister to “hurry up in the formation of the government,” as Parliamentary Speaker Nabih Berri reportedly told Mikati during a June 5 meeting.

The fact that Mikati is currently leading a caretaker government, and one that is not fully empowered, has raised the question as to what happens if Mikati fails to form a government in time?

According to former MP Boutros Harb, it is clear that under the current laws and Constitution, the caretaker government will only be able to operate in a caretaker capacity, adding to Lebanon’s woes as it continues to suffer from one of the worst economic crises that the modern world has seen.

“The priorities of the government is how to continue in the execution of what has already been taken as a decision and ruling the country in order to avoid an inexistent government,” Harb told NOW. “This will be a body to just rule [the country] day by day to solve the problems that occur day by day without having the power to take any commitment or taking any new decision. A country like Lebanon in this crisis on all the levels, it’s going to be catastrophic.”

What does the Constitution say?

Lebanon does not have a very extensive or thorough constitution.

It outlines most of the basic principles of the state, such as how the various branches of the government are meant to function, and that is about it.

For the most part, it has held up pretty well over the years, albeit with the country’s politicians doing their best to bend it to their benefit, but it has never quite broken.

That could be about to change, however, as Lebanon could be facing a new first: having no president and no government at the same time.

Throughout Lebanon’s history, there have been times when there has been no government for a long period of time and the same goes for the presidency. But it has never been at the same time.

In May 2014, President Michel Suleiman’s term came to an end, and a new president was not chosen until 2016, as politicians were unable to agree on a single name to lead the country.

This means that this government doesn’t have all of the powers of the president that are connected to this person as the President of the Republic. But they can manage the country in the limits of what the Constitution permits.

Because of this, then-Prime Minister Tammam Salam and his government, which coincidentally holds the record for the longest time it took to form a government, acted as Lebanon’s ruler.

According to Article 62 of the Constitution, in the event that there is a vacancy in the presidency, the cabinet shall take over the role of the presidency by delegation until Parliament is able to select a new leader.

It does not, though, detail what should happen in the event that the government in question has also resigned.

Because Lebanon is full of different political and religious factions that have their own interests, the presidential election process can often be dragged out for an extended period of time, making the need to form a government quickly this time that much more important.

The factional bickering was something that Antoine Massara, an expert on constitutional law, was quick to condemn.

“There are Lebanese parties that practice compromising and positioning themselves in relation to the state,” Massara told NOW. “This is really dangerous. We ask the Lebanese who are acting in this matter to take a stand that supports Arab and international politics.”

According to Harb, in the event that there is a vacancy in the presidency and the government has resigned, then the government continues to act in its caretaker capacity but is unable to act through delegation in the way that it could if it was a fully recognized government.

“This government cannot rule the country outside of the established work,” Harb explained. “This means that this government doesn’t have all of the powers of the president that are connected to this person as the President of the Republic. But they can manage the country in the limits of what the Constitution permits.”

Due to the limitations placed on the government, this could spell disaster for Lebanon which is struggling to combat the nearly three-year-long economic crisis that has decimated Lebanon’s economy and the lives of its citizens.

The cost of failure

In the past, whenever Lebanon failed to form a government or elect a president in a timely manner, there have not been any major consequences.

International allies might get irritated with the country’s politicians and the country might come to a standstill for a bit, sometimes leading to protests condemning the politicians’ inaction. But, for the most part, the politicians could go on negotiating, posturing and working to secure better deals for themselves for as long as they wanted.

Since the start of the economic crisis in late 2019, however, there have been serious consequences for their inability to form a government.

Since the caretaker government can only handle day-to-day issues and continue with already decided upon policies, they are not able to truly address the root problems of the economic crisis and work to help the country recover.

For example, the deal that the Lebanese government has been negotiating with the IMF requires reforms to be passed and implemented if Lebanon wishes to see the desperately needed funding from the global body.

A caretaker government is not able to implement these reforms.

On top of this, the country would face further political paralysis as, according to the Constitution, Parliament is unable to work on anything else besides electing a new president once their term ends.

In the past, if there was no clear candidate to be elected as president, then Parliament would pass an amendment extending the acting president’s term by another couple of years.

But given the current divisions in Parliament, it is nearly impossible for even that to happen now.

The Free Patriotic Movement, founded by Aoun, might have the support of its allies in the Shiite parties, Hezbollah and the Amal Movement, but, outside of that, they do not have much of support.

This would put the country in a chaotic situation that will not permit that the system works if we don’t have a government with full power and we don’t have a President of the Republic.

Samir Geagea’s Christian Lebanese Forces would almost certainly vote against approving an extension for Aoun and the newly elected opposition MPs would also be unlikely to support the amendment.

Both Salem and Harb agree that Mikati could potentially form a government in the short time that he has left before Aoun’s term comes to an end, but neither of them are particularly hopeful that he would actually be able to accomplish this, leading to a worsening of the already dire situation in Lebanon.

“Unfortunately, we will face more problems and problems on the economic and social level, on the constitutional level and the security level too,” Harb stated. “The best way [to avoid this] is to rush the presidential election and to push all of the parties to accept that there is no possibility of having a vacancy in the two bodies of the presidential powers and the government powers.”

Massara was slightly more optimistic, believing that the politicians will recognize the severity of the situation and agree on a government quickly.

“I believe it is coming to an end because this strategy [of protracted negotiations between parties] is a risk and will not last,” he said. “Not to mention, the United stated, Europe and other countries are beginning to finalize their decision regarding the interference of Iran in Lebanon and the region.”

Another option for Mikati is to push the Parliament to extend the caretaker government’s powers so that it can take a more active role in ruling the country until a new president is elected, something that has never been done before and would set a precedent for future caretaker governments.

The constitutionality and legality of this are up for debate and would likely be challenged in the courts.

For Massara, it is more important that the government take into account the public’s needs and work to their fullest capacity to ensure the safety and stability of the country as it continues to grapple with the effects of the economic crisis.

“The caretaker government must secure the public interest and the continuity of institutions, and this is a general principle in constitutional systems, the continuity of public utilities in any form, and in the severity of the law and its rights on this subject,” he stated.

However, Harb has little faith in anyone involved that they will be effective in leading the country in the event of a vacancy in the government and presidency, arguing that the only possible outcome in this situation is a country in chaos.

“This would put the country in a chaotic situation that will not permit that the system works if we don’t have a government with full power and we don’t have a President of the Republic,” Hard said.