HomePoliticsDossierAudience of none
Dossier
Nicholas Frakes

President Michel Aoun called for a national dialogue, but had little success in gathering even the old guard in Baabda, and analysts say his lack of credibility as a neutral political figure, no real preparation for the process, as well as the bad timing reveal an electoral maneuver rather than a serious negotiation initiative. 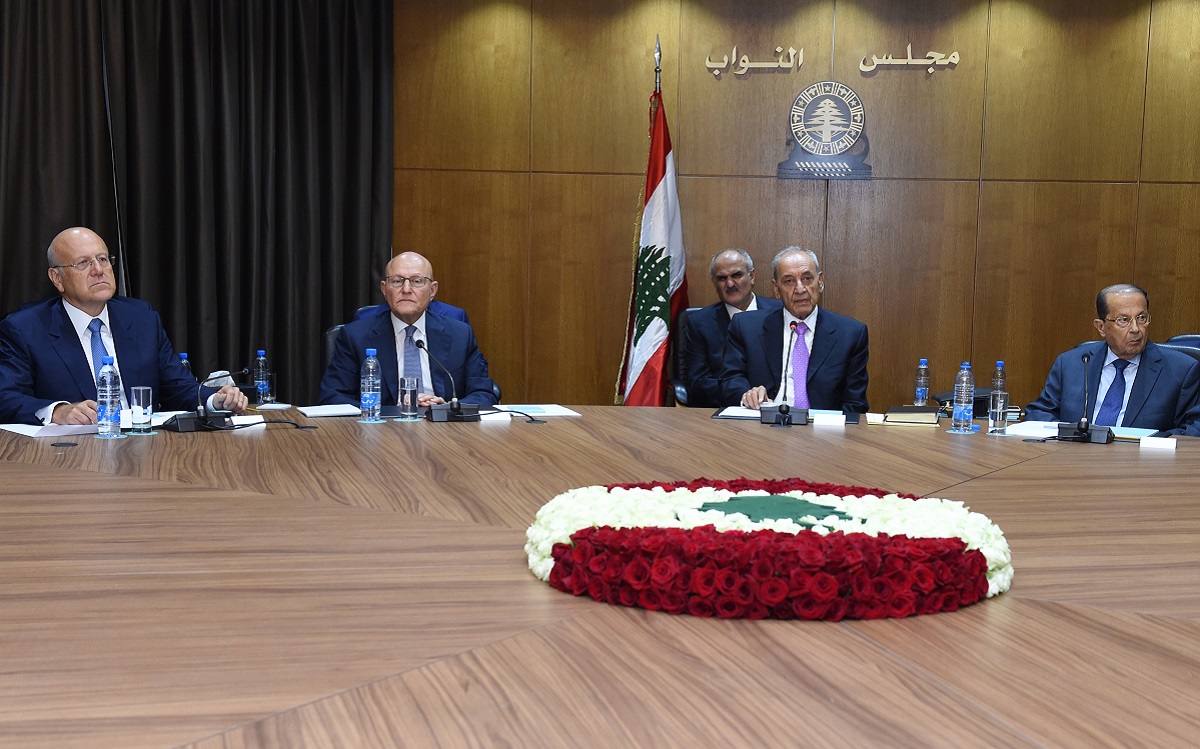 Lebanese President Michel Aoun began a call for national dialogue at the end of 2021, but after several meetings with various political parties, few have shown any real interest in taking part in the president’s proposed discussions.

Aoun’s first calls for national dialogue came in the midst of a political stalemate with the Shiite parties, Hezbollah and the Amal Movement, while they boycotted all cabinet meetings asking for the removal of Judge Tarek Bitar, who heads the investigation into the August 4 Beirut port explosion.

By the time Aoun opened up the doors for national dialogue, the cabinet had not met for over two months since the boycott began on October 12.

“The deliberate, systematic and unjustified disruption that leads to institutions dismantling and the dissolution of the state must stop,” the president stated during a December 27 televised address.

However, it was not only the deadlock in the government that was on his mind, he said.  He also expressed frustration over the lack of ability by Parliament to pass key legislation, such as economic and structural reforms.

Amal and Hezbollah have since announced an end to their boycott but there has still been no national dialogue despite Aoun’s insistence.

Because few agreed to take part, it forced Aoun to cancel the planned meeting but to keep the door for national dialogue open.

With Aoun’s presidency coming to an end soon and both parliamentary and presidential elections fast approaching, analysts view Aoun’s calls as little more than an attempt at scoring political points before the election so that his party might do better and his son-in-law, Gebran Bassil, might have a chance at succeeding him in the presidency.

“It was really obvious when he had to cancel the meeting and he said that the invitation would be open which means nothing,” Walid Moubarak, former Lebanese American University associate professor of political science and former advisor to former President Michel Suleiman on national dialogue, told NOW.

“Nobody is going to attend the dialogue of the president whose tenure is expiring now. There are so many immediate issues that he has to attend to.”

This would not be the first national dialogue to land on its face. Lebanon’s history is full of attempts at agreements that failed to fully address the issues plaguing the country.

However, all of these had international mediators who managed the talks.

When it came to dialogue held entirely in Lebanon by Lebanese parties, these discussions have seen… less success.

Following the assassination of Rafik Hariri in 2005, Speaker of Parliament Nabih Berri called for a national dialogue in 2006 to discuss the Special Tribunal for Lebanon, Palestinian weapons inside and outside of the refugee camps scattered throughout the country, delineating the border with Syria and creating a strategic defense policy for Lebanon.

While the tribunal was agreed on quickly, the issue of Palestinian arms and the border with Syria were “agreed on in principle, but nothing was really done in practice about them.”

“[National dialogues] don’t have an executive power unless they are agreed upon by the council of ministers and the parliament,” Moubarak explained.

The final issue, of a strategic defense strategy, was never really addressed because, according to Moubarak, it dealt with disarming Hezbollah and turning their weapons over to the army so that the army would be the only body able to determine peace and war in Lebanon.

The talks were also brought to an end when a war sparked between Hezbollah and Israel after Hezbollah kidnapped two Israeli soldiers in July 2006.

Finally, there was the national dialogue under President Michel Suleiman from 2008 until 2014 when his mandate ended.

The main success to come out of this was the Baabda Declaration in June 2012, which stated that Lebanon would not interfere in issues outside of its borders.

This was short-lived as Hezbollah came to the aid of Syrian President Bashar al-Assad who was at risk of being overthrown amid the country’s civil war.

Due to all of these failures at having a successful national dialogue, some in Lebanon have become wary of the process, believing that the current political establishment is incapable of holding serious talks.

“It’s just like a gathering for people to talk and to try to make electoral alliances,” Camille Mourani, political relations coordinator for the National Bloc Party, told NOW. “All of these dialogues were strategic where they didn’t lead to anything.”

However, Moubarak still views them as being important as they are meant to solve crises that Lebanon is facing, and “it is better to have dialogue than fighting in the streets.”

Moubarak argues that dialogues have benefits that are not necessarily seen, namely that they keep people talking and can, at least temporarily, put a stop to any conflict.

But to get all parties talking to each other requires proper preparation.

In order to hold at least moderately successful talks, Moubarak says that several conditions need to be met.

This is important because having everyone involved in the talks provides a sense of legitimacy, since all parties involved are being heard.

While Lebanon’s most successful discussions have had external mediators, Moubarak says that this has its drawbacks.

“If there is an external mediator, he should try to strengthen the Lebanese national dialogue itself,” the former academic said. “But many of them have their own interests in order to intervene in Lebanon as external mediators.”

They have to do their homework before they call for a meeting. They have to study the positions of the different parties, they have to go into a ‘mapping exercise’ and try to put some scenarios and when it comes to the agenda, it is not enough for the president to put the agenda.

According to Lebanon’s constitution, when it comes to national dialogue, the role of mediator belongs to the president who should act as a neutral force. But this presents a whole host of other problems.

Lebanon’s politics are deeply divided, with the president being selected by the country’s politicians who have their own alliances and grievances with one another, making it challenging to have a mediator who can act as a neutral force for all those involved in the dialogue.

Finally, there needs to be thorough planning before any calls for a national dialogue are even announced.

“They have to do their homework before they call for a meeting. They have to study the positions of the different parties, they have to go into a ‘mapping exercise’ and try to put some scenarios and when it comes to the agenda, it is not enough for the president to put the agenda. The agenda can only be put by participants in order to feel that they are a party to what they are doing.”

Without these three requirements, any attempts at dialogue are almost doomed to fail.

When Aoun announced his call for a national dialogue, he had none of these things.

Following the start of 2022, Aoun began holding bilateral meetings with the heads of various political parties to try and make sure that all of the key players were on board to join the talks meant to find solutions to Lebanon’s crises.

Aoun’s close allies, primarily Hezbollah, were quick to throw their support behind the president and his plan.

However, even longtime allies of the president were reluctant to take part in such hastily arranged discussions.

“As for dialogue, it must be between two groups with different opinions, or it should be within one team, there is no point in dialogue just for the sake of form,” Suleiman Frangieh, head of the Marada Movement, told the press after his January 11 meeting with Aoun. “Therefore, we wished them success, and any decision taken by this team, we will support it without hesitation, knowing that they will not agree on something we oppose, but that we attend only for the sake of attendance, there is no point in that. Therefore, we will not participate in the dialogue.”

Other parties who opposed Aoun did not even meet with the president and rejected the proposal outright.

“Even the opposition inside the elite, if we are talking about the Future Movement, the Lebanese Forces and the PSP of Walid Joumblatt, refused to participate in this dialogue,” Mourani said. “Even Suleiman Frangieh who is a close ally to Michel Aoun. It’s one party negotiating with themselves in the absence of some of them, like Suleiman Frangieh. That’s why the national dialogue didn’t take place. And it won’t take place. I don’t see it taking place any time soon.”

It’s just a maneuver to take the picture with all of these political parties and to find common understandings, then, taking it from there, he can form some alliances.

Parties and political groups that positioned themselves alongside the October 17 movement, such as the National Bloc, were not included in the consultations or the president’s plans. Moyrani argued that this was all just an attempt by Aoun to bolster his party’s political standing and to lend support to Bassil who is widely expected to run for the presidency later this year.

“It’s just a maneuver to take the picture with all of these political parties and to find common understandings, then, taking it from there, he can form some alliances,” Mourani stated.

In addition to this, Aoun has little credibility in the eyes of many, even among the political establishment, as he has constantly had a hand in aggravating the country’s issues and has burned bridges with some political leaders.

“I don’t think that the president that we have is very trusted by all of the parties because he was always a party in his rule,” Moubarak said.

“Some of them did not bother to meet bilaterally with Aoun, like Samir Geagea, because they did not believe that it would work and Aoun did not demonstrate neutrality in his rule. He was always a party to the conflict and he was in confrontation with more than one element of the Lebanese participants who were asked to join the national dialogue.”

Moubarak, who was part of a team of advisors who organized several National Dialogue sessions during the presidential tenure of Michel Suleiman (2008-2014), recalled the countless hours of work needed in order to ensure that they were properly prepared for the talks. It required setting up committees and creating files on all of the participants.

“What we did when we were consulting the president on this, we created a sitting committee on national dialogue which incorporated around 10 professionals who were working on this who were providing advice to the president, knowledge sharing and strategic guidance,” he stated. “We met around 142 times to really discuss how to go about strategic defense. It’s not a game. And it’s not really a place to score points against your opponents.”