Recently elected opposition MPs and activists have celebrated the removal of the barriers surrounding Lebanon’s Parliament in Beirut, hailing it as the first step towards changing the country. 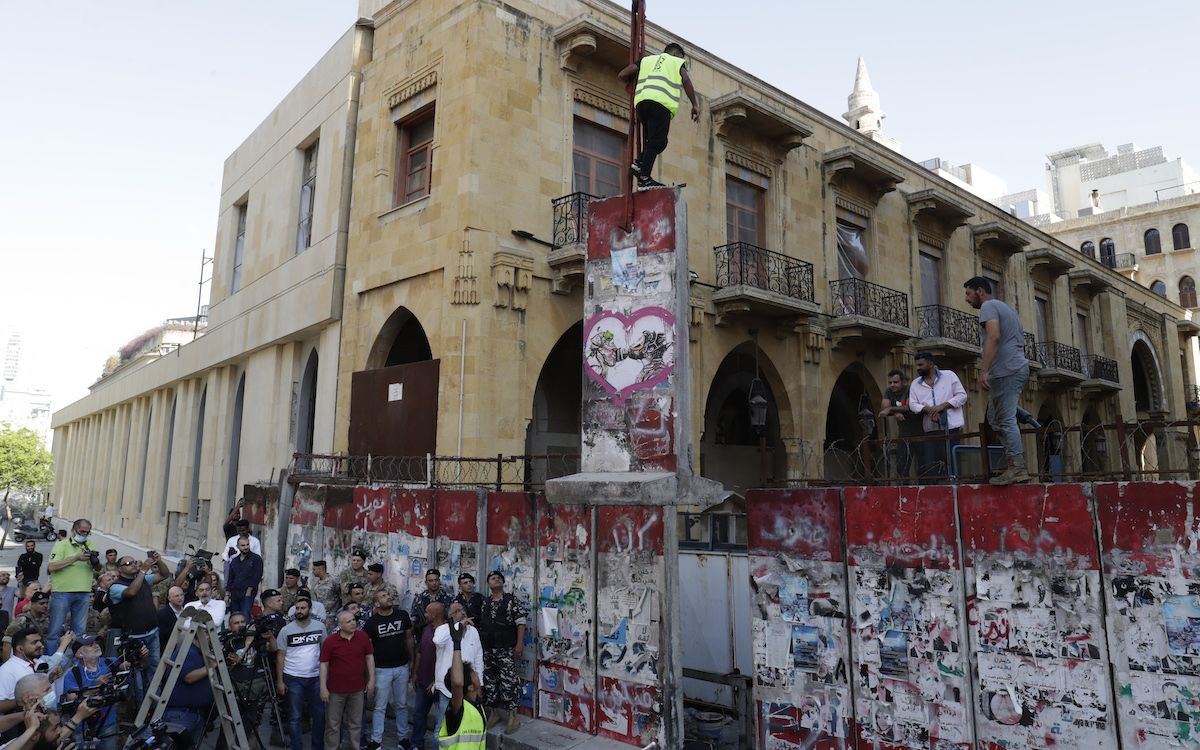 Workers remove sections of the concrete barrier, which was erected by Lebanese security forces in 2020 to bar access to streets leading to the country's parliament building, at the entrance of the Lebanese Parliament in the capital Beirut on May 23, 2022. Photo: ANWAR AMRO, AFP

When Lebanon’s security forces first put up the concrete walls and barriers around Najmeh Square in Beirut, which houses the Parliament building, in December 2019, many Lebanese saw it as the political establishment putting up a literal wall between them and the people.

It was in the midst of the October 17 uprising, and much of the Lebanese population had made it clear that they wanted the old political establishment out.

However, after supporters of the Amal Movement, headed by Speaker of Parliament Nabih Berri, and Hezbollah clashed with the protesters, the walls were erected in order to keep the protesters from entering Parliament.

They were not put up gradually, but in the middle of the night when no one was watching.

And since then, there has been criticism and calls for the barricades to be taken down. The people, however, eventually resigned themselves to the reality that they would stay up for years, until there were significant changes and the politicians felt that they no longer needed to separate themselves from the people.

That change came much earlier than expected with Berri’s office and the Ministry of Interior announcing on Monday that the barriers were going to be removed that afternoon.

This was quickly celebrated by political activists and supporters of the opposition MPs who are now in Parliament.

As the walls were being removed, Lebanon’s caretaker interior minister, Bassam Mawlawi, offered a blunt explanation as to why they were being taken down.

“The people who were protesting are now inside,” he stated.

Calls to have the walls removed first reignited after Elias Jrade, a newly elected opposition MP from the South III district, posted on social media that these barriers should no longer separate the politicians from the same people who elected them.

“No walls should be built between the nation’s representatives and the citizens,” Jrade stated in the post.

Not too long after, it was announced that they would indeed be removed.

Walls that don’t permit people to get to Parliament are just an indicator of a besieged, illegal, uncredible government. So, this is a step in the right direction.

Jrade is not the only opposition MP to celebrate the removal of these literal and metaphorical barriers.

Mark Daou, an opposition MP from Aley who surprised everyone by defeating Hezbollah-backed candidate Talal Arslan during the May 15 elections, said that this should have been done long ago, criticizing the government for keeping it in place for so long.

“The dismantling is long overdue,” Daou told NOW. “Walls that don’t permit people to get to Parliament are just an indicator of a besieged, illegal, uncredible government. So, this is a step in the right direction.”

For opposition MPs and activists alike, the removal of the barriers is a sign that things in Lebanon are beginning to change.

“The walls have been taken down,” Daou continued. “And this will hopefully result in many reforms that will help save the Lebanese people.”

Lina Boubess, 62, was one of the most active individuals taking part in the October 17 uprising, receiving the nickname “mother of the revolution.”

When she first heard that the walls were coming down, she was ecstatic and hopeful once more that Lebanon was finally heading in the right direction.

“I believe it is the beginning of the end,” Boubess told NOW.

“[The traditional parties] ​​know that it is the beginning of their end. But what’s good about it is that we are in [Parliament] now. We can oppose them and we can change. This mafia has been there for decades. It takes a lot of time to remove them. Step by step we’ll get there. There is hope for change. But slowly and gradually.”

Faisal Timrawi, 37, ran with Beirut Madinati in the Beirut II district during the 2022 elections but withdrew when the group decided to pull the entire list and focus on the Beirut I district.

Even though he was not elected, Timrawi is still celebrating the fact that he will once again be able to gaze on Parliament, a building that he says belongs to the Lebanese people and not political parties.

“From day one, we told them that the parliament belongs to the people,” Timrawi told NOW. “These walls have been broken by the power of the people, not by the request of the government.

However, both Timrawi and Boubess acknowledge that while the removal of the walls is symbolic of the gradual changes in Lebanese politics, there is still a lot of work that needs to be done and that just removing the barriers is not going to suddenly make Lebanon a different country.

Change will come very slowly, but we have a lot of things to fight for.

Most notably is the investigation into the August 4 Beirut Port explosion, which has been stalled for months due to continued lawsuits by those being called in for questioning by judge Tarek Bitar.

Two MPs who were reelected on May 15, the Amal Movement’s Ali Hassan Khalil and Ghazi Zeaiter, are under investigation by Bitar.

Since they were reelected, they now possess parliamentary immunity which would have to be lifted in order for Bitar to be able to question or charge them.

On top of this, Berri is likely to be named Speaker of Parliament again, a position that he has held for 30 years.

“They are trying to bring [Nabih] Berri [as Speaker of Parliament] again, and this will create a lot of problems,” Boubess stated. “So I think that we are going to have a harsh opposition in the Parliament.”

Boubess knows that change will be slow and that she may not see it in her lifetime, but she continues to hold onto hope that the next generation will be able to see it for themselves.

“I have a lot of hope in this young generation,” she said. “They don’t accept what we accepted during the civil war.”

In order to keep the push for change alive, Boubess says that while the revolution is now inside Parliament, it is still important to keep it alive in the streets as well in order to keep up pressure on all fronts.

Even though change might be slow, for Boubess, it is worth continuing the fight for and that, just like with the walls, it is bound to come at some point.

“We should never give up,” Boubess stated. “Change will come very slowly, but we have a lot of things to fight for.”