As elections near, rising opposition parties face allegations of corruption and collaboration with the establishment, but rather than discourage them, this should be seen as an opportunity to build transparency and trust, analysts say. 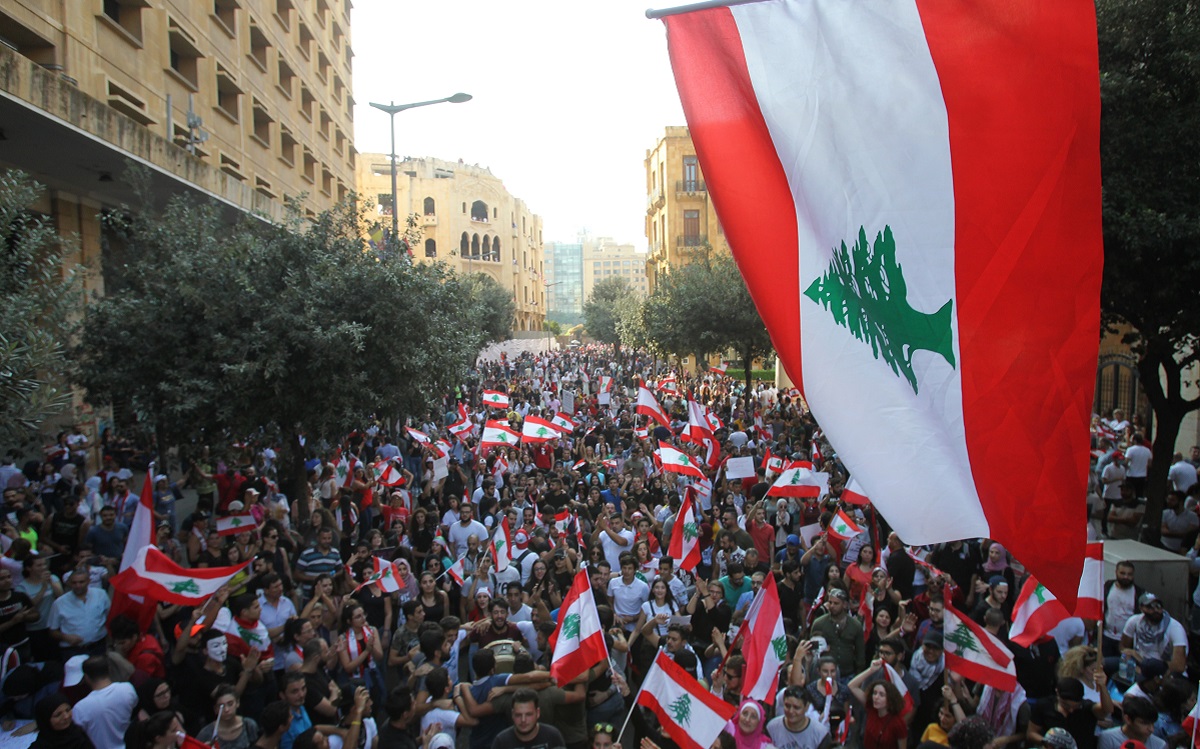 Lebanese demonstrators take part in a protest against dire economic conditions in Lebanon's southern city of Sidon (Saida) on October 21, 2019. Thousands continued to rally despite calls for calm from politicians and dozens of arrests. The demonstrators are demanding a sweeping overhaul of Lebanon's political system, citing grievances ranging from austerity measures to poor infrastructure. Photo: Ibrahim Amro, AFP.

Members of Minteshreen, one of the opposition groups born from the October 17, 2019 uprising, found themselves under public scrutiny in mid-January. Embezzlement allegations in one of the charities that group members had set up and operated during the Covid-19 pandemic and after the August 4, 2020 Beirut port blast, surfaced, as members of the party and some NGO workers resigned and made their reasons public on social media.

Maroun Karam, ex-treasurer of Minteshreeen and director of charity NGO Baytna Baytak, was accused by former coworkers of mishandling donations. Some donors have expressed interest in auditing a range of nongovernmental organizations whose founders were members of the newly formed political group. Moreover, critics from the October 17 movement called the party leadership out for unethically mixing politics and charities in the same manner sectarian establishment parties have done for decades, using non-profit organizations to provide aid in exchange for votes and political support.

But some accusations went further: attacking the party leaders and members for their alleged association with the “sulta”, as opposition members and supporters, as well as activists, refer to rich sectarian political circles. Anonymous social media accounts quoted vocal activists who pointed out that party leaders were shareholders alongside Dalia Jumblatt, daughter of Druze leader, Walid Jumblatt, in Grand Factory, a nightclub that was renovated after the blast through donations. Some also multiplied voices that accused party leaders’ families of allegedly working with Hezbollah to facilitate the smuggling of oil to Syria.

Some of such voices, however, were sponsored, Hussein Al Achi, Lebanese lawyer, and secretary-general of Minteshreen told NOW. The sponsored posts on social media made Minteshreen members believe that someone was taking advantage of the situation in Baytna Baytak, extrapolating it to Minteshreen and was trying to ruin the credibility of the party before the May 15 elections.

“We’ve been dealing with hate campaigns and bullying for over a year now but this time, it hit differently. The attack was much more aggressive,” he said.

Many voters, especially in the diaspora, have been calling for a single opposition coalition running for the May 15 elections on a platform with concrete and well founded political reforms. But divisions abound among Lebanon’s young secular politicians and allegations of a lack of transparency on the part of Minteshreen from other opposition voices have disappointed many voters who wanted change.

Activists as well as opposition supporters demanded transparency and accountability from both Minteshreen and Baytna Baytak, calling for audits.

Activists, analysts and opposition politicians, however, agree that, for all opposition groups, this is an opportunity to reflect and try to build solid institutional frameworks that shield their organizations from such criticism.

“But we should not throw the baby out with the bathwater,” Carmen Geha, assistant professor of public administration at the American University of Beirut, told NOW, insisting that the opposition as a whole should not lose its credibility just because it has to purge and hold some members accountable.

For Al Achi, mixing Minetshreen with the embezzlement allegations in Baytna Baytak as well the attacks against himself based on his friendships and family business ties with Hezbollah members was a planned campaign that aimed to cause tensions between opposition groups and ruin any chances of unity.

“It’s important for us to unite and stand by each other’s side. If we don’t do that, not only would we risk losing any chances we had at the elections, our input as members of the opposition will also be gravely affected,” Al Achi said.

A video on Minteshreen’s Instagram page was released, with Al Achi himself debunking some of the accusations: he said that his father’s law firm was not under US sanctions for defending Hezbollah-linked enterprises and that his personal friendship with Dalia Jumblatt was never hidden and has nothing to do with his political activity.

He did not offer any answers regarding Baytna Baytak and the embezzlement accusations.

“If we want to build a system that functions on institutional work, we must be willing to do just that. If the conflict is within Baytna Baytak, a separate entity, who am I to interfere? We support the team in their endeavor for accountability and transparency,” he explained.

Imad Salamey, professor of political science and international affairs at Lebanese American University, explained that it was typical before elections for people to start checking others or run background checks on candidates, and open files to investigate in order to undermine the competition.

“This is the beauty of democracy, it gives you the opportunity to examine public records of candidates to make sure the best person is being supported and elected. The problematic candidates will then lose,” Salamey told NOW.

As changemakers, we need to get used to defending ourselves. Whether it’s through documents, media discussions, statements or opening files.

NOW reached out to several opposition groups, but not all were willing to answer our questions, and some analysts said they weren’t even following the controversy that has been mostly unfolding on social media.

Mark Daou, co-founder of Taqaddom, told NOW that he expected that some progressive movements would be targeted by various criticism campaigns, especially those with a stronger presence and stronger branding, and he found transparency was the best defense.

“As changemakers, we need to get used to defending ourselves. Whether it’s through documents, media discussions, statements or opening files,” Daou told NOW.

He also says that Taqaddom expected their turn to come and was ready to face any allegations openly. For Daou, it is this willingness to stand for criticism, to take it in and exercise transparency, that made the movement as a whole different from the old sectarian parties, which never accepted criticism and never publicly disclosed any funding information.

Getting rid of old habits

AUB’s Geha also said that controversies or disputes are also a symptom of the pre-existing violent political system.

“After a series of disappointments from the political class, the uprising, the pandemic, and the financial crisis, as a society, we didn’t have time to process all of this. The degree of violence against us was too high so it’s normal for us to be paranoid,” Geha told NOW.

For Geha, the system allowed abusers to exist because it normalized corruption and clientelism everywhere. It is healthy for a society based on mistrust to weed out the bad and hold them accountable for their actions, she said.

“We shouldn’t enter a cancel culture where we cancel out all of the opposition because some members were bad. The system already violates us in all ways, we should be constructive with each other, not immediately destructive,” she explained.

Lebanese politicians are not known for their transparency and constructive criticism against each other. Instead, they implemented divisive sectarian speech, and to Geha, the Lebanese owed it to each other not to become more polarized.

Lessons to be learned

Geha said she was interested in how Minteshreen was going to handle the allegations, as she believed this was an opportunity to start building institutional work with bylaws that provided transparency on finances and members.

The opposition had a chance to prove itself different from the old political guard they are running against.

“It’s healthy in politics to investigate and to be cautious. They never teach us this at school nor show us in the media. You start with the one closest to you to know who should go and who should stay,” Geha explained.

Salamey considered this issue minute in the grand scheme of things and said it probably wouldn’t have repercussions on the opposition as a whole. But he criticized some opposition groups for being “one-man shows” where members or leaders were put under the spotlight more than others.

This is the beauty of democracy, it gives you the opportunity to examine public records of candidates to make sure the best person is being supported and elected. The problematic candidates will then lose.

“This makes them resemble traditional parties. The more the group acts on collective leadership, political platform-driven organizations, the fewer reasons for disputes, the more personalized they become and the disputes are likely to arise,” the professor said.

Opposition groups in Lebanon need to prove they are rank-and-file based and, for Salamey, the opposition should retain focus on their strategies, alliances, and the small districts that allow them the opportunity to win.

Al Achi said that as a progressive party, Minteshreen, despite losing some members in the controversy, remains in the electoral race.

“It’s time for us to get back to our political work. We feel stronger and more experienced now. But we have elections to prioritize,” Al Achi said.