Of a string of bank hold-ups, the depreciation of the Lira, the national budget, public sector raises, a meeting with Bassil, the anniversary of the Sabra and Shatila massacre, clashes near Baalbek, a Lebanese army raid in Tripoli, The Mayyas’s victory, fighting in the Caucasus, Hamas’s reproachment with Damascus, a cholera outbreak, and the state of Khamenei’s health. Your weekly update from Lebanon. 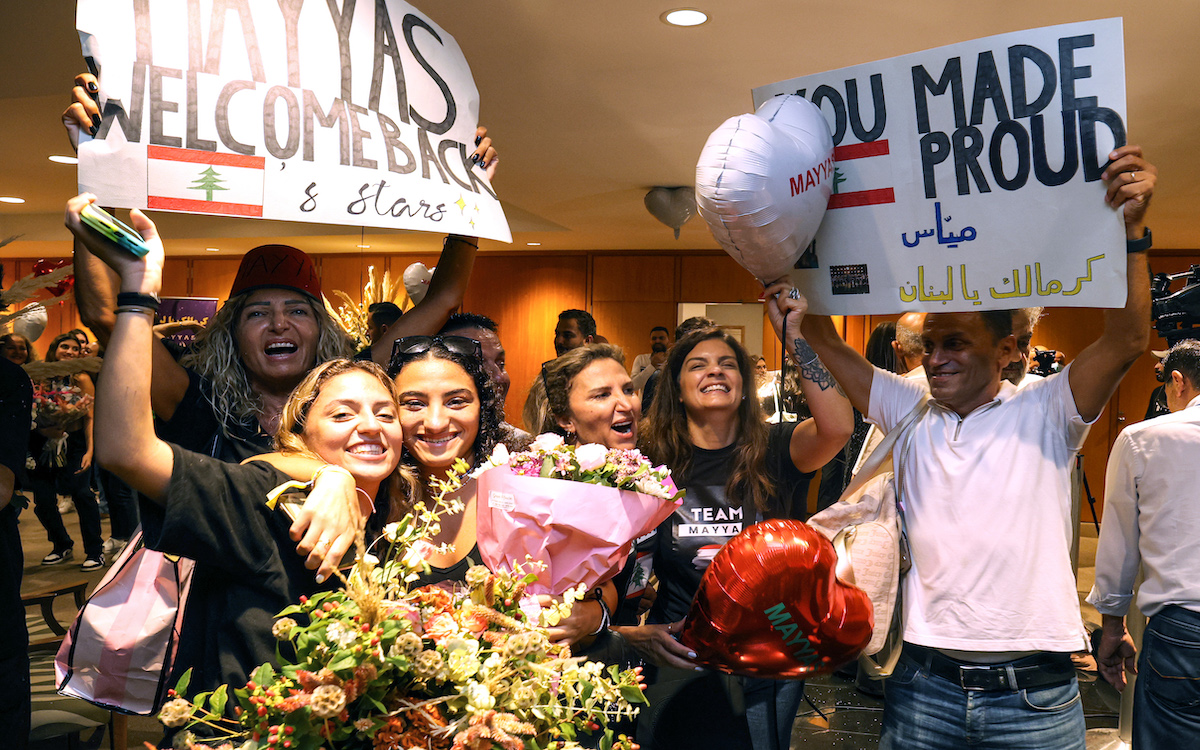 Members of the Lebanese dance group Mayyas are congratulated as they arrive at Beirut International Airport on September 16, 2022 after winning the "America's Got Talent" TV contest. Fans in Lebanon across age groups and religious lines in the crisis-tested country and its large diaspora tearfully cheered the all-women group for what judges and viewers hailed as a hypnotic and mesmerising performance. The troupe scooped a $1 million prize and the chance to headline a Las Vegas show for their extravagant performance featuring belly dancing, feather fans and white orbs of light. Photo: Anwar Amro, AFP.

As I happened to predict by chance last week, this week’s news was dominated by the string of bank hold-ups that occurred from Wednesday to Friday.

It is beginning to feel as if we are entering a new phase of Lebanon’s current crisis.

Things have only gotten worse, and the crises afflicting Lebanon will likely continue to deepen.

But, now, people are starting to reach levels of desperation that were perhaps unthinkable not too long ago.

Crime is getting to a point where it is ill-advised to drive on certain roads at night or even during the day.

The police and military seem even more absent, and Lebanon’s security situation is beginning to look grim.

And with this recent string of bank hold-ups, it is unclear what will happen next.

The banks can’t close indefinitely and, considering that the Lebanese government is largely in the pocket of the banks, one must wonder what sort of plan the government has to stop these incidents.

Is that even a feasible idea?

The coming weeks will inform us of what is going to happen.

Perhaps bank hold-ups will simply become more commonplace, but it is likely that the banks or the government will enact some sort of plan to deter depositors from seizing their savings.

Thankfully, there is some good news this week.

Lebanese dance troupe, The Mayyas, won the most recent series of America’s Got Talent, giving the Lebanese people a temporary reprieve to celebrate.

In times like these, even small victories are still worth celebrating.

Too big to fail: On Friday, September 16, depositors stormed banks across Lebanon demanding their savings.

Around eight banks were targeted.

Outside Lebanon Gulf Bank in Beirut’s Ramlet Bayda neighborhood, protesters showed up to support depositer Jawad Slim who is holding up the bank demanding to withdraw 35,000$ of own money. pic.twitter.com/3d1gImqNlI

Jawad Slim is refusing to leave the bank with his deposit, his brother tells me that he was offered 15,000$ but refused it. Protesters becoming more more and vocal. https://t.co/qRgLSChFya pic.twitter.com/TN3Fj54mZN

Bassem al-Sheikh Hussein, who held up a bank in Hamra last month, made an appearance to support Abed Soubra as he attempted to secure his savings from a BLOM Bank in Tariq el-Jdideh.

Friday’s hold-ups followed two incidents that occurred on Wednesday, September 14, when Sali Hafiz stormed a BLOM Bank in Sodeco and a man did the same in Aley.

Banks will be closed for three days this week in response to the hold ups.

Some have also taken to social media to make jokes that parody the absurdity of robbing a bank for one’s own money.

Circulating all-over #Lebanon‘s whatsapp now… I wonder whether it is good to keep one’s sense of humor, or bad to be so sarcastic and blasé. It’s certainly awful to feel so helpless. pic.twitter.com/I0WOgrQA7q

After nearly three years of economic turmoil, the Lebanese government still has not passed any meaningful legislation to mitigate the crisis.

Lira hits new low: The Lebanese Lira has hit a new low as a number of economic and social factors continue to deflate its value.

The temporary closing of the banks, the lifting of fuel subsidies, and low currency reserves have all had a negative impact on the Lira’s value.

With such low currency reserve, the Lebanese government will find it increasingly difficult to stabilize the Lira’s value as it continues to plunge.

The cost of living also continues to rise alongside the inflation, making life even more unbearable for the vast majority of the population.

Political impasses: Though the debate regarding Lebanon’s national budget was meant to be held last week in parliament, a number of MPs walked out of the chamber due to the discussions being “chaotic.”

The walk-out caused attendance to fall below quorum, delaying any sort of agreement on legislation.

Speaker of Parliament Nabih Berri scheduled the next session for September 26, following the return of Prime Minister Najib Mikati from trips outside the country.

The budget is also part of the IMF’s agenda regarding potential relief funds, but even if a budget is passed soon, it is difficult to imagine that it will really fulfill the IMF’s stipulations.

Getting a raise: Parliament did manage to pass a 3-fold hike of the salaries of public sector employees, which generated some controversy on social media.

Same exact parliament did NOT approve the 2022 budget yet

Others were less critical of the raises.

Things to keep in mind:

– The military and security personnel account for more than 65% of public wages.

– The civil administration is less than 10%.

– Public sector workers in Lebanon make up around 13% of the labor force, which is a lower proportion than in the US.

Either way, the increase will likely be offset by inflation soon enough.

A meeting with Bassil: The newly elected independent MPs met with Gebran Bassil, the leader of the Free Patriotic Movement (FPM), to discuss matters regarding the Lebanese Presidency.

The group reportedly discussed electing a president a and the necessity of avoiding a presidential vacuum if a decision is not made.

Memories of a massacre: Friday also marked the 40th anniversary of the Sabra and Shatila massacre, in which 100s, if not 1000s, of Palestinians and some Lebanese Shiites were butchered by the Lebanese Forces militia, also known as the Phalange, under the command of Elie Hobeika and backed by Israel.

The massacre was among the worst of the Lebanese civil war, only rivaled by the Tel Zaatar massacre of Palestinians in 1976.

Following Israel’s invasion of Lebanon in 1982, the Israeli military advanced all the way to Beirut, linking up with its Christian allies in the east of the city and besieging west Beirut, where the Palestine Liberation Organization (PLO) was based.

After a two-month-long siege, the PLO agreed to withdraw from Beirut, Israeli forces swept the city, and consequentially surrounded Sabra and Shatila.

The Phalangists then entered the camps and killed men, women, children, and the elderly without distinction.

A documentary in which the perpetrators of the massacre are interviewed is currently available online.

Today is the 40th anniversary of the massacre of Sabra & Shatila.
Our documentary MASSAKER is for one week online:https://t.co/CFHjoXOjcK
The massacre through the eyes of the perpetrators.@LokmanSlim #SabraShatila #massacre pic.twitter.com/w5OQ2Pkztf

No one involved in the massacre has been held responsible for the crime.

Bekaa clashes: Clashes erupted near Baalbek and Khreiba over the weekend, prompting the Lebanese army to intervene and enter the area.

The cause of the clashes is unclear.

Tripoli raid: The Lebanese army carried out a raid in the Abi Samra neighborhood of Tripoli and arrested a number of wanted persons.

Five were reported to be arrested on charges of theft, drug distribution, and counterfeiting.

Weapons, hand grenades, drugs, and counterfeit currency were confiscated during the raid.

Ashraf Rifi, an MP from Tripoli, praised the army for its actions.

Small victories: The Mayyas, a Lebanese dance troupe that won the latest series of America’s Got Talent, returned to Lebanon on Friday to celebrate their victory

Family, friends, and fans welcomed the victorious Mayyas upon their landing at Rafic Hariri International Airport, with the group arriving to cheers from the crowd, and receiving a seemingly endless stream of flowers and balloons.

Nadim Cherfan, the Mayyas’s choreographer, spoke negatively of the Lebanese government upon the group’s return, telling reporters at the airport that, “we don’t need you [politicians], Mayyas made Lebanon proud without your help.”

In response to the string of bank hold-ups, Cherfan noted that “people should break all the banks, shake up the country and turn the table over politicians’ heads.”

A bitter dispute: Heavy fighting broke out between Armenia and Azerbaijan over the weekend, as Azerbaijan attempted to penetrate Armenian territory.

The two countries have been at loggerheads since their independence from the Soviet Union in the early 1990s, leading to two full-scale wars over the disputed Nagorno-Karabakh, which Armenians call Artsakh.

Nagorno-Karabakh is an Armenian-majority area that is technically within the borders of Azerbaijan. Armenia managed to capture most of the area in the first war following independence, but, more recently, the country suffered a massive defeat in 2020, when Azerbaijan managed to secure most of the region.

Armenia is supported by Russia and Iran, though it has made appeals to the West for assistance against Azerbaijani aggression.

Azerbaijan is supported by Turkey and Israel, with Turkish drones playing a decisive factor in more recent rounds of fighting.

A ceasefire has been announced, but it is unclear for how long it will hold.

A changing tide: As Turkey continues to make inroads with the Syrian government under Bashar al-Assad, Hamas, the Islamist Palestinian militant group that controls the Gaza Strip, has mended its ties with Damascus.

Following the outbreak of revolution in Syria, Hamas gave Assad the cold shoulder, but as more and more countries begin normalizing with his regime, Hamas has now joined the growing list of governments and political groups that are willing to bring Damascus in from the cold.

The move has caused controversy among Syrians who are against normalization.

It should be noted that Hamas’s decision is likely based on pragmatism as opposed to any love for Bashar al-Assad.

Though his regime killed 1000s of Palestinians, namely in the Yarmouk camp in the southern Damascus suburbs, Hamas, like Assad, receives military assistance from Iran and likely sees the writing on the wall.

Trouble over the border: A cholera outbreak has recently occurred in neighboring Syria and seems to be worsening, as the country simply does not have the capacity to deal with such a crisis.

Such an outbreak could have serious consequences for neighboring countries, especially Lebanon, given the crises the country is experiencing.

Still in the game: Though there have been a number of rumors that Iran’s Supreme Leader, Ayatollah Ali Khamenei, may be on his deathbed, he made a public appearance on Saturday, September 17, during a mourning event to mark the Shiite religious observance of Arbaeen.

Though Khamenei may be in bad health, he is still clearly able to make public appearances.

Indeed, this is not the first time there have been reports and rumors that the Ayatollah was on the brink of death, and his current state is unclear.

The nature of power: I wrote about the death of Queen Elizabeth II and examined how power manifests itself in society and the lessons that can be learned from said power when applied to Lebanon.

Podcasts: Médéa Azouri & Mouin Jaber spoke with Nadim Koteich about Aoun, democracy in the Arab world, and the trouble brewing in Iran’s sphere of influence on Sunday’s Sarde After Dinner podcast.