Thursday’s parliamentary session to vote on Lebanon’s next president was canceled despite there being less than a week before President Michel Aoun leaves office. 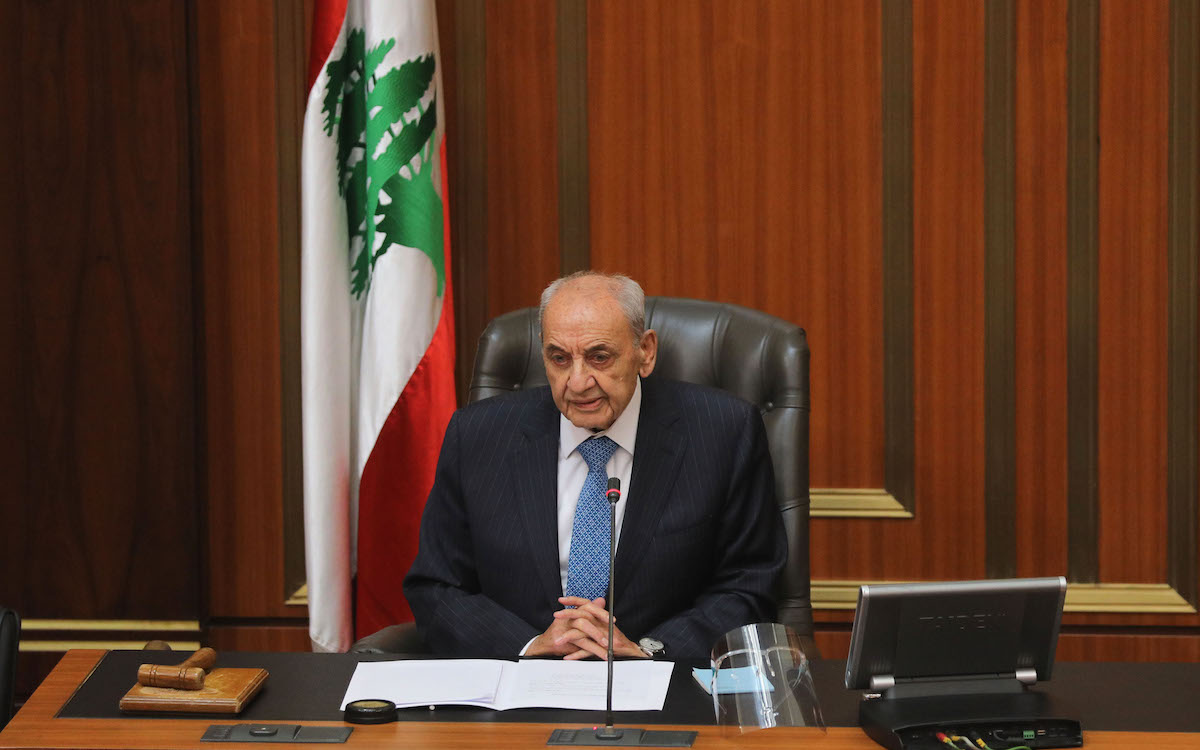 Lebanese Parliament Speaker Nabih Berri attends a parliament session to elect a new President in Beirut on September 29, 2022. Lebanon's parliament met to elect a new president, with no consensus on a successor to outgoing head of state Michel Aoun despite an unprecedented financial crisis. Photo: Ibrahim Amro, AFP

The media office for Parliamentary Speaker Nabih Berri announced that Thursday’s session to vote on the next president of Lebanon has been canceled, adding that the date for the next session would be set at a later time.

Berri’s spokesperson gave no explanation as to why the session had been canceled, but the decision was made after the long-serving head of parliament met with France’s ambassador to Lebanon, Anne Grillo, where the two discussed the general situation in the country.

This decision also comes just two days after Parliament failed, for a fourth time, to elect a candidate to succeed the current president, Michel Aoun.

During Monday’s session, the majority of the ballots cast were blank, with 39 going toward the independent candidate Michel Moawad, 16 protest votes with 15 of them for “New Lebanon,”  and 10 votes for Issam Khalifa.

Aoun is set to leave office on Monday, but Parliament has so far failed to come to a consensus on any candidate.

Even the big names that many believe intend to run, such as Gebran Bassil, the head of the Free Patriotic Movement and the son-in-law of Aoun, Suleiman Frangieh, leader of the Marada Movement, and Samir Geagea, leader of the Lebanese Forces, have not thrown their hats into the ring.

Moawad, after meeting with the leader of the National Liberal Party Camille Chamoun, said that it was imperative for the opposition in Parliament to come together and unite behind a candidate that could help lead the country out of the three-year economic crisis that has devastated the country.

“The priority in Lebanon is to elect a president, and any dialogue should be about this file, and dialogue is not an alternative to the sessions for electing the president,” the presidential hopeful stated.

“We have to meet on a sovereign and reformist president and gather the opposition under the roof of institutions, and based on the confidence that the majority of the opposition gave me, I extend my hand to all opposition parties in order to save people from what they are suffering,” Moawad later added.

Lebanon’s opposition has been largely divided in recent weeks, particularly amongst the 13 “change” MPs, with little agreement amongst the group as to who they should back for the presidency.

For the most part, the opposition MPs have placed protest votes, although some voted for Khalifa during Monday’s session.

Two MPs, Michel Douaihy and Waddah Sadek, have left the Change Bloc, so it will be hard for any candidate to find the full support of all 13 opposition MPs, despite their insistence that whoever is eventually selected to lead the country should be independent and outside of the political system that many view as being corrupt.

While Parliament may hold sessions to elect a president, it is mostly just political theater, as the real votes take place behind closed doors with the various political factions negotiating and vying for support for their candidates.

However, should the political parties and Parliament be unable to elect a new president before Aoun leaves office, it will create a power vacuum in the country with there being no clear end in sight as to when it could possibly be filled.

Aoun was elected as president in 2016 after over two years of deadlock in which neither side in Parliament could come up with a name that would allow them to reach the majority threshold of votes in order to be elected.

It was not until the Shiite party, Hezbollah, made an agreement with the Maronite Christian Free Patriotic Movement that the deadlock was finally broken and Aoun was selected as the president, ending the political crisis.

In addition to the lack of a president, there is still currently no government in place, with the cabinet formed by Najib Mikati in September 2021 working only in a caretaker capacity since the parliamentary elections on May 15.

In an interview with the Lebanese broadcaster Al-Jadeed, FPM MP George Atallah stated that there could be a new government in the next 48 hours.

However, he added that “[the FPM] have not provided the names of our ministers yet.”

In the event that there is no president and no government, it would put the country in an unprecedented political and constitutional crisis that could have severe economic ramifications.

Despite Atallah’s assurances, there seems to be little indication that any government might be formed in the near future.

Due to the Mikati government only being in a caretaker status, it will not be able to temporarily fill in the role of the presidency until a new one is elected. This was confirmed by Aoun in an October 25 statement.

“If a presidential vacancy occurs, the current government will be deprived of powers, and therefore it cannot exercise the full powers of the President of the Republic,” Aoun stated.

The lack of a president or government will also essentially bring the entire country’s politics to a halt.

With no new session to vote on the next presidency, it is unlikely that any vote will happen before Aoun departs the Presidential Palace in Baabda on Monday, making it all that much more likely that Lebanon will soon be adding a political crisis to the already dire economic one.