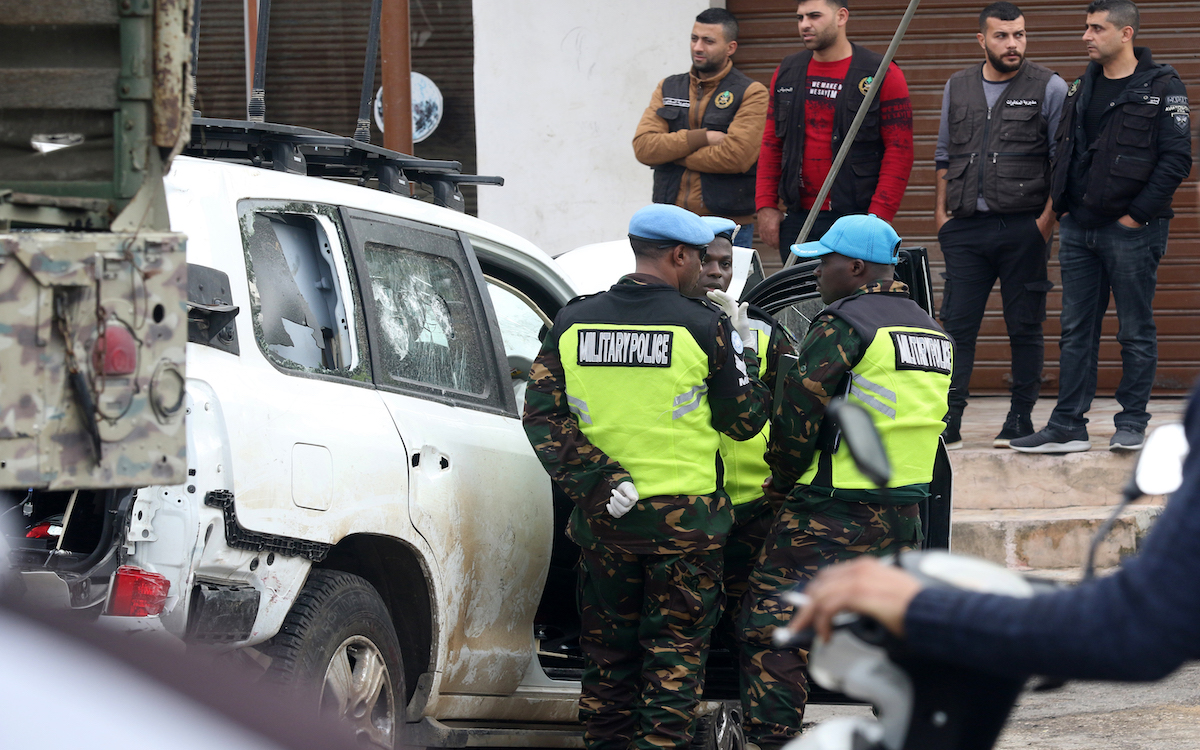 One would think that with Lebanon being in the midst of the worst economic crisis that the world has seen in 150 years, there would be a sense of urgency amongst the politicians in Parliament and the members of the government to act quickly.

However, one would be mistaken.

Lebanon is now entering its fourth year of economic collapse, and Parliament has yet to pass any reforms that would help mitigate or end this crisis.

On top of this, on December 15, Parliament failed for a whopping tenth time to elect a new president.

The results were no different from the previous nine attempts. Hezbollah’s bloc cast blank ballots, while the opposition continues to show disunity by voting for a wide array of candidates, with the most votes continuing to go to Michel Moawad.

#Lebanon’s Parliament has, for a tenth time, failed to elect a new president with MP Michel Moawad and blank ballots continuing to receive the most votes. The next session will not be held until after the New Year, meaning Lebanon will be without a president for two months…

None of this, as has been said in basically every briefing for the last two months, is surprising in any way.

The country is in need. The people are in need.

The solution is clear and at hand.  MPs need to actually negotiate over a suitable candidate that could effectively lead the country.  And they need to work together to write and pass sweeping economic and financial reforms that would allow Lebanon to gain access to billions of dollars in aid from the International Monetary Fund as well as, potentially, from the international community.

But that would require Lebanon’s politicians to make sacrifices to their interests, and that is something that they have never been willing to do, and it does not look likely to change now.

Why would they, when they can keep going as they are while facing no consequences? It seems that eventually Joseph Aoun, the commander of Lebanon’s military, will become the consensus candidate and be elected as president.

It is a matter of everyone getting their reassurances so that they will be open to publicly supporting him.

Their personal and sectarian interests will always rank higher than the national interest and the interest of the people.

Lebanon needs a president now, but the next electoral session is not happening until after the New Year, and well into 2023.

Even then, when Lebanon will have been without a president for three or more months, the politicians will continue failing at doing what is needed for the betterment of the country.

At least they still get medals for trying.

UN peacekeeper killed: An Irish UNIFIL soldier was killed and three more injured, one of which severely, after a mob in south Lebanon began shooting at the convoy on December 14 when the UN soldiers ended up in a village that they do not normally patrol.

The soldier, identified as 24-year-old Pvt. Seán Rooney, was shot in the head after a UNIFIL convoy headed towards the airport ended up in al-Aaqibiyeh, a village south of Sidon. South Lebanon is a stronghold for Iran-backed Hezbollah.

What happened next remains unclear due to differing accounts of events, but most agree that the soldiers were stopped and questioned by residents in the village. What ensued was shooting at the convoy. Pvt. Rooney was shot in the head and killed, and three of his colleagues were injured and taken to a hospital in Sidon.  One soldier was also critically injured and required immediate surgery.

The UN, along with Irish officials, have called for an immediate investigation into the incident.

Going to the courts: Since the start of the economic crisis, hundreds of thousands of Lebanese have had their savings trapped in the banks after informal capital controls were implemented, which drastically limited how much money depositors can withdraw in a given month, as well as in which currency.

Citizens have tried a multitude of things in order to regain some of their trapped money, most famously through armed hold-ups.

However, a US court ruled that a lawsuit against Bank Audi filed in New York can go forward, opening up the possibility for Lebanese abroad to file lawsuits against their banks in order to retrieve their money.

This ruling, though, only allows for the case to move forward and does not determine if the bank needs to give the plaintiffs their money. Lawyers for Bank Audi insist that they will eventually get the case thrown out.

Death sentence upheld: A Lebanese court has upheld a death sentence ruling for Tariq Houshieh, an Uber driver who killed Rebecca Dykes, a British woman who worked for the UK Embassy, in 2017.

Dykes’s body was found on the side of the road, having been strangled and showing signs of sexual assault. Days later, Houshieh was arrested for the murder.

It is unclear if the sentence will actually be carried out, as Lebanon has had a de facto moratorium on executions with none being carried out since 2004.

Way down we go: Once again, the lira has reached a new all-time low, something that seems to be an almost monthly occurrence.

#Lebanon’s national currency, the lira, has reached yet another all-time low to the USD, surpassing 44,000 to $1. Parliament has so far failed to pass any reforms that could help the country begin to recover. #لبنان #دولار

Lebanon is in desperate need of economic and financial reforms in order to not only unlock billions of dollars in aid, but also to restructure the system that brought the country to this point.

However, MPs have so far failed to pass any of these reforms and are now focusing on electing a president, at which they are also failing.

Cholera update: Cholera cases are increasingly under control in Lebanon as more and more municipalities have worked to combat its spread.

There are currently 663 confirmed cases, 4,665 suspected cases and 23 deaths.

As long as the infrastructural issues that helped lead to the bacteria’s spread are not dealt with, the risk will continue to be present.

Get outta here: Iran has been removed from the UN’s women’s agency after a US-led vote saw a majority of the UN Economic Social Council vote in favor of the resolution.

The vote is seen as being the strongest rebuke of the Islamic Republic and to the Iranian government’s response to the protests and treatment of women since the start of the nationwide protests in September.

Iran was elected to the UN agency in March 2022.

Since the women-led protests began, hundreds have been killed, and thousands arrested.

To the gallows: Iran arrested prominant actress Taraneh Alidoosti on Saturday, making her yet another high profile Iranian arrested after expressing support for the protests.

Others include one of the country’s top footballers, Voria Ghafouri.

Since the demonstrations began, the government has executed two prisoners convicted for “moharebeh,” or waging war against god, a crime which automatically carries the death penalty.

Many others are expected to be sentenced to death in what human rights observers have called sham trials meant to intimidate the people protesting in the streets.

Thinning out the competition: The mayor of Istanbul, Ekrem Imamoglu, has been banned from holding and seeking elected office after he was found guilty of “insulting public figures.”

Imamoglu was widely seen as a potential rival to Recep Tayyip Erdogan in the 2023 presidential election.

Erdogan has been trailing in the polls amid a worsening economic situation caused by his economic policy, which has baffled most financial experts, and Imamoglu was believed to be a serious candidate that could potentially unseat Erdogan.

Some have called the court’s decision politically motivated to ensure that Erdogan has no challengers in the election. Imamoglu has stated that he will appeal the decision.

Concern at the top: Some in Israel’s military have expressed concern when it comes to the upcoming far-right government led by Benjamin Netanyahu.

Israel’s military chief, Lt. Gen. Aviv Kochavi, put out a rare statement after one soldier expressed emphatic approval that Itamar Ben Gvir will lead the country’s security services, condemning what the soldier said and urging other conscripts to avoid getting involved in politics.

Former security and intelligence officials also sent a letter to Netanyahu expressing concern that recent events could lead to chaos within the military.

Netanyahu has insisted that he will be the one in charge of his government’s policies, but it is unclear how true that will be, as he has given many important roles to his right-wing allies.

The dream comes to an end: Morocco’s historic World Cup run came to an end on December 14 when they lost in the semifinals 2-0 against France.

On December 17, they lost 2-1 against Croatia, finishing fourth in the World Cup.

While the team may not have won the international tournament, they have gained the respect and admiration of many throughout the Middle East and Africa, being the first Arab/African team to make it to the semifinals.

Even as the final whistle blew, marking the end of Morocco’s time at the World Cup, fans continued to cheer them on.

Data: In the third part of Samara Azzi‘s “Unbanked” series, she explores the vendors who transfer money without any fees, and how they may be using senders’ data as a “fee” instead.

Goodbye friend: Morocco captivated the Arab and African world with their phenomenal run in the World Cup. While that came to an end, NOW’s Dana Hourany wrote about how Morocco’s victory served as a rare unifying force in the region.

Failed policy: The US has often put out harsh statements condemning Hezbollah, and have consistently sanctioned the Iran-backed group. However, I looked at how the US policy for Hezbollah has failed and what they should be doing instead.

Finding a light in the dark: The August 4 Beirut Port explosion will forever be a dark and tragic day in Lebanon’s modern history. But one good thing came out of the horrible day. William Noun and Maria Fares have announced that they plan to marry.

Both Noun and Fares lost siblings in the explosion, but their tragedies brought them close together, ultimately leading them to love.

Podcasts: Getting accurate information about what is happening during the protests in Iran is challenging to say the least, given the government’s strict crackdown on information. However, Post Reports spoke with a mother and son about life inside the Islamic Republic amid the ongoing demonstrations.