Pushed to the extreme

August 4 victims’ families warn against escalations as they gather to peacefully protest in Beirut, Lebanon, but after Tuesday’s clashes, they feel rioting is increasingly becoming the only way to achieve recognition. 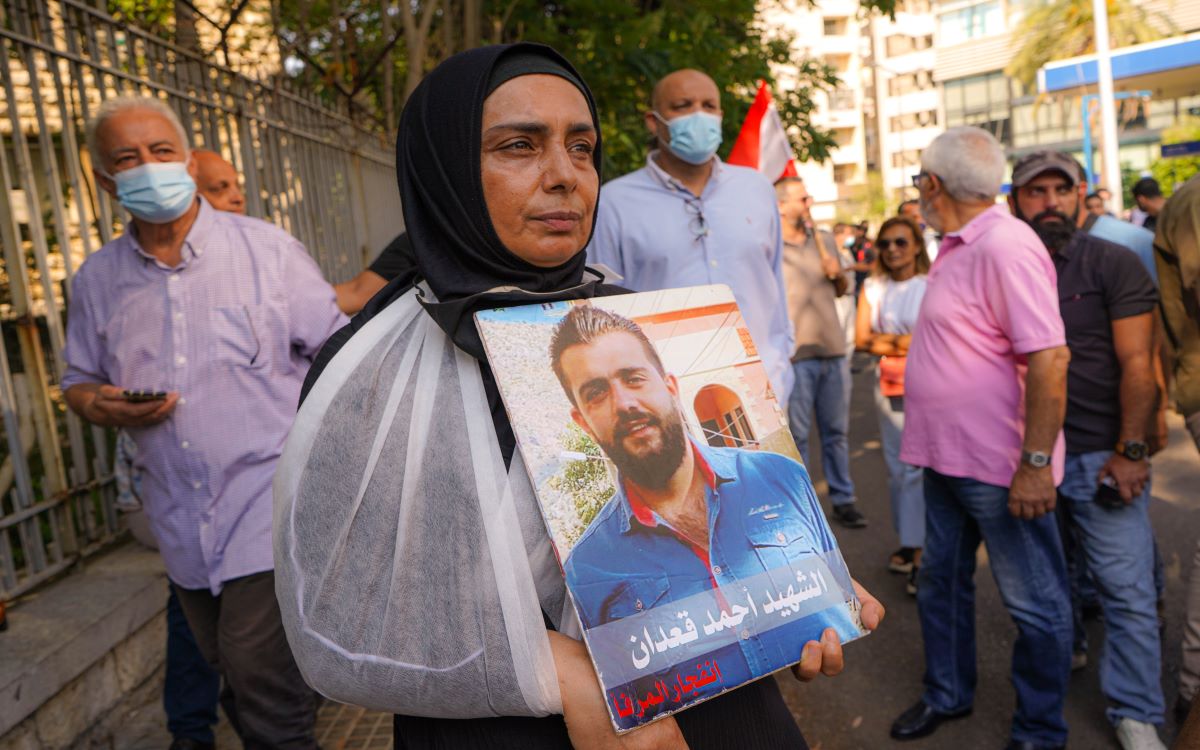 Hiyam Kaadan, mother of the deceased Mohammad Kaadan, holds a picture of her son at the protest, Beirut - Lebanon. Photo: Dana Hourany, NOW.

Mohammad Kaadan’s mother, Hiyam Kaadan, gripped the picture of her deceased son tightly, with teary eyes and a weary face.

“Even if my blood spills all over the place, I won’t stop.”

She stood in front of the Justice Palace in Beirut on Wednesday evening as the port blast victims’ families staged yet another protest to demand once again justice for their relatives.

The night before, on July 13,  a group of protesters, including the families of the August 4 victims, clashed with the minister of Interior Mohammad Fahmi’s security guards, at his Beirut home.

“They hit us, cursed at us and Fahmy’s gang even dislocated my shoulder. But I’ll do anything for my son so I don’t mind.”

The painkillers soothed the physical pain she was feeling but she says only justice could alleviate the burden of her loss. She has been carrying it as all of the other victims’ families have carried it since August 4, 2020.

“The more they hit us, the stronger we get,” Kaadan stated. “Why would I be scared of them killing us? We’re already dead.”

Protestors from anti-government secular groups joined the families in protest to show their support.  The families intended to make a statement by placing coffins in Fahmi’s yard to illustrate their anger at his refusal to grant permission to the Chief investigator into the Beirut blast probe to question the General Security chief Abbas Ibrahim as a suspect. But as emotions heightened, some turned to more violent means: they broke into the residence, vandalized the entrance and clashed with security.

Security forces used tear gas to disperse the protestors, several of which were injured.

The plan before the clashes

The protest was meant as a symbol of grief and sorrow as the families marched with 18 coffins, 4 of them white, referring to the children who died, with church and mosque sound playing from loudspeakers in the background.

“The idea was to put the coffins inside the building’s hallway to leave a clear message that says, do not kill us again,” Ibrahim Hotteit, brother of the victim Tharwat Hotteit and spokesperson for the victims’ families, said.

The point of the protest was not to chant nor to yell, but to let the tears speak for themselves. They wanted to be acknowledged, and to deliver their message clearly to the minister – lift the immunity.

Fahmy’s men, however, had a different idea. Once the protestors crossed the first line of security, the situation quickly escalated.

“I was the only one that got inside the building,” Hotteit said in a speech.”I was trying to calm everyone down, but then I saw a man attacking one of the mothers and this is where I had to interfere, this is the second time Hiyam Kaadan gets attacked.”

He explains that he attempted to organize things with the security men peacefully at first, but they had suddenly turned against him, leaving everyone shocked and drained.

“I thought bringing sorrowful mothers was enough to make Fahmi sympathize with us but I guess he’s made out of stone.”

“I thought bringing sorrowful mothers was enough to make Fahmy sympathize with us, but I guess he’s made out of stone,” he added.

Hotteit also addressed the Public Prosecution office and asked them to “quit playing games”, as he referred to Fahmi’s refusal to go after Abbas Ibrahim, after allegedly consulting his legal circle.

“After consulting our own legal team, we concluded that this was a lie because at the end of the day, he is the only one that can have a final say in this,” Hotteit stated.

The families are now waiting for the Prosecutor’s Office’s decision regarding lifting immunities before they plan their next steps.

“The immunity file is now with them and let this day be a symbol of what can and will definitely happen in case we are tricked again,” he said angrily.

Both Hotteit and Kaadan say, the government’s silence and the politicians’ refusal to comply with the investigation pushes people towards violence.

At Wednesday’s protest in front of Justice Palace, the families blocked the road near the Justice Palace in Beirut with burning tires to hint at what can happen on a bigger scale in case immunities were not lifted.But on the other side of the road stood protestors with a little less patience.

“We want a life that isn’t always about killings and murders,” the protestor said. “The protest shouldn’t be peaceful because these people in power don’t understand what peace is, they are mafias that kill us and our kids. We need all of the country’s intellectuals and army to join us immediately.”

As tensions bubbled between pro-peace and pro-violence groups, intermediaries kept trying to keep escalation at bay by calling out for patience and unity.

A peaceful protest for Hotteit served the purpose of presenting the group of families as civilized beings that do not want to turn into “street kids” unless the circumstances call for it.

“For a case like this one, I’m proud to be a street kid,” Ahmad, a 24-year-old protestor, yelled from behind the crowd.

For Ahmad, violence is the one and only way to get results and he warned all politicians of  future attacks, as they will storm more than just Fahmy’s house.

“Violence is not a goal, it’s a consequence if we do not get what we want. Then expect things to reach far more than just violence.”

“If the immunities aren’t lifted then if they want an open war, an open war is what they’ll get,” he added.

More protestors expressed their frustration and anger at Hotteit; some of them had lost their homes and sought justice, or revenge, right away.

“You are not the only victims, we are victims too, all of Beirut’s residents are victims,” said one protestor.

Hotteit replied that they’re simply following a plan and that they will no longer speak in slogans nor chants. They’re aiming to deliver a message until a decision is made regarding lifting immunities before they decide whether to escalate things or not, he said.

“You can’t go against us, if we say this is a peaceful protest, you can’t chant that it’s not,” Hotteit added. “We are the ones who decide what to do and the ones who do not agree can start their own protest.”

Between fighting the tears, keeping it together after the clashes or angrily expressing their willingness to fight for justice, the families say they have found a new sense of courage that made sacrificing themselves entirely for this cause completely unquestionable.

“I used to lack courage before all of this happened but after losing my dad, nothing else matters, I’m now ready to do whatever it takes to make sure justice is served.” Ali Haydar, a victim’s son, said.

The protestors as a whole made it clear that they were not afraid, but that the politicians should fear what will come next.

“They think by beating us they can test how persistent we can be but we are here to tell them that if they don’t give us justice, we’re going to take it forcefully,” a woman who lost her sister in the explosion also said.

General George Nader, a member of the October 17 front, asserted that with the accumulations of all the issues the Lebanese people are facing as a whole, chaos is bound to happen.

As Lebanon becomes a boiling pot of anger and chaos, one thing the families agreed on and kept repeating was that the blood spilled will not go to waste.

“Violence is not a goal, it’s a consequence if we do not get what we want. Then expect things to reach far more than just violence,” Hotteit said.