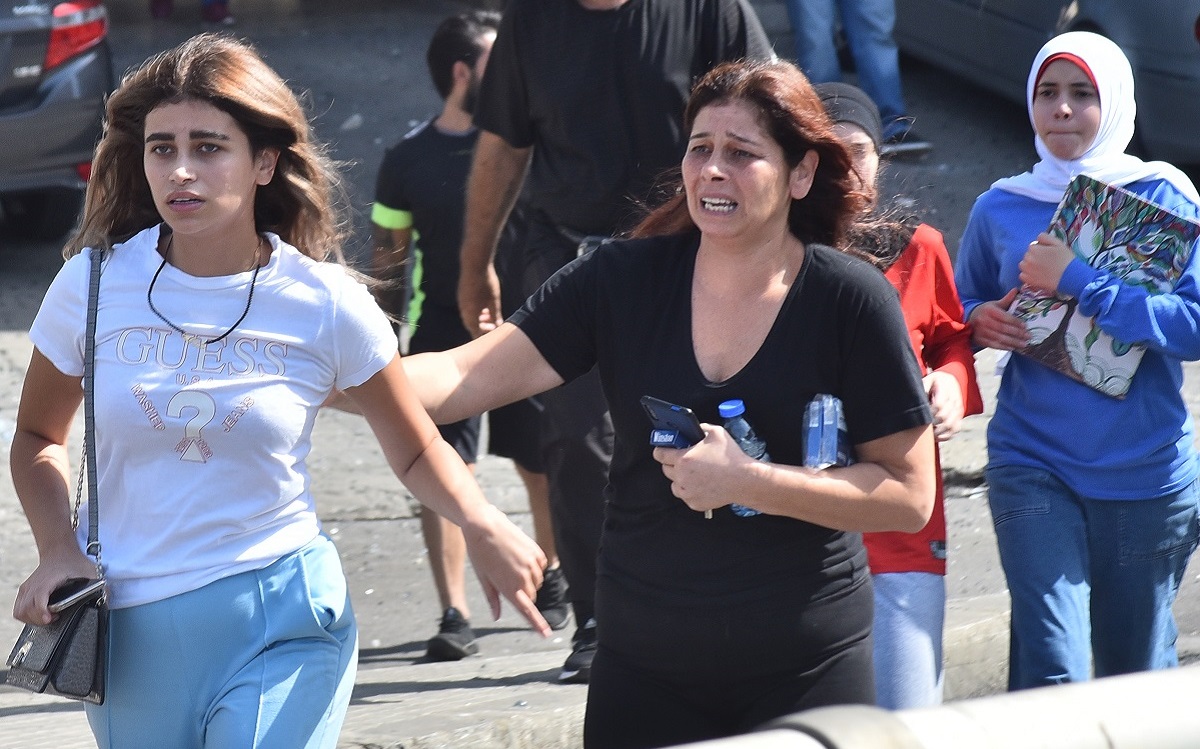 This image published by AFP on Thursday of civilians running for cover, terrified, has brought back memories of similar shots from the Lebanese civil war. Photo: AFP.

It rained on Sunday during the two-year anniversary rally of the October 17 uprising. A small crowd lit the flame of the revolution in central Beirut, but there weren’t many gathered. It was more of a commemoration.

Some said people barely can afford fuel to get to work or send children to school.

But the truth is, others said, that the Lebanese are collectively drained. Depleted after years and years of  protests, demands for change, hopeful demonstrations, crushed dreams, killings, bombings, impunity and traumas one ofter the other.

After years and years of murders, crushed dreams of any chance of stability and, in the past two years, an economic crisis that brought them to their knees. They have been robbed of their savings by the same people who robbed the country. Again, with impunity.

And Thursday’s clashes that left 7 dead and 32 wounded after a protest against justice, made the idea of protesting itself seem out of place.

Everyone expected the fighting on Thursday after Hezbollah, the Amal Movement and the Marada Movement called for a protest against the Beirut port explosion investigation in front of Beirut’s Ministry of Justice.

Many residents of the area around the Justice Palaces stayed home to avoid closed roads, burning tires and rocks being thrown.

They did not expect a reenactment of the Lebanese civil war, some of the worst fighting that the capital has seen since the civil war ended in 1990.

Hello, I am Nicholas Frakes, in Tripoli, and this is NOW’s roundup of last week’s events in Lebanon.

Gunmen fired countless amounts of bullets and missiles at inhabited buildings where people hid in bathrooms, their bodies and minds automatically remembering the habits learned during the civil war. Missiles.

No justice, no peace

During the Black Lives Matter protests in the United States demonstrators chanted “No justice, no peace”. In Lebanon, that seems to work the other way around. Politicians want to make sure that if anyone pushes for justice, they will violently retaliate.

They have always used this card in times of crisis against the people demanding accountability. And it is the card played with the international community when Brussels, Paris and Washington push for more than the status quo.

Pick your player:  Hezbollah and Amal claimed that Christian Lebanese Forces supporters were shooting at their members and supporters. Amal and Hezbollah supporters had arrived at the protest already chanting slogans against the LF leader Samir Geagea and, despite efforts by some to contain them, many went into the streets inhabited by LF supporters and threw rocks at cars and destroyed shops. That was what our colleagues on the ground saw and recorded.

Geagea said that his party did not plan any street violence. He also said that, knowing the presence of LF supporters living in the area, the party’s head of security had called on the Lebanese Army to deploy and make sure the Hezbollah-Amal rally was to “pass by simply as a demonstration and not affect civil peace.”

The Lebanese Army issued a statement that they would shoot any armed individual that they saw in Tayouneh. It looked that the LAF did use live ammunition during the protest and clashes, after a video of a soldier shooting at civilians emerged on Saturday night, two days after the gunfight. The Army confirmed in a statement that the soldier in the video was indeed under investigation.

Choose your map: The fighting in Tayouneh is not new to Beirut’s residents.

During the civil war, the area served as the border between the Shiite southern suburbs and the Christian Ain el-Remmaneh. Many of the buildings still show the scars of that fighting along with the bombings by Israel during the July 2006 war with Hezbollah.

Since then, the Lebanese army has remained present on the unofficial border in order to avoid conflict between the groups on the two sides to a varying degree of success.

The fighting on October 14 marked the worst that the area has seen between Lebanese groups since the civil war ended in 1990.

“You need to calm down”: Following the day of violence, the international community was quick to call for calm.

The French foreign ministry spokesperson, Anne-Claire Legendre told reporters that “France calls for calm on all sides concerned. The priority now must go to implementing the urgent and necessary reforms to enable Lebanon to emerge from the crisis, especially in the energy sector.”

The US State Department issued a similar statement and Russia said that it was “extremely concerned” by what had occurred and urged for “restraint.”

Given how much the Lebanese parties and political class care about the international community’s opinion, they are sure to take what they are saying very seriously.

Against the probe: In his Monday evening speech, Hezbollah Secretary-General Hassan Nasrallah dedicated nearly half of his hour-long to attack judge Bitar, saying that he was politicizing the investigation and that someone else needs to be put in charge of the investigation that would be more “transparent.”

These attacks are nothing new. Since Bitar announced that he wanted to bring current and former ministers in for questioning, Lebanon’s political class has been extremely vocal when it came to their opposition against the judge.

The five ministers representing Hezbollah and Amal Movement decided not to attend any government meetings until the judge investigating #BeirutBlast is removed from his position.This happens just less than one month after the government won the parliament confidence vote.

It has even affected the government with a scheduled meeting on October 13 being postponed due to Hezbollah, Amal and Marada ministers disagreeing with how the cabinet should “deal with” Bitar.

There was similar opposition when Judge Fadi Sawan first announced charges largely against the same people Bitar is seeking to interrogate.

A complaint was filed against Sawan at the Supreme Court which ultimately led to his dismissal from the investigation at the end of January. The suspects charged with negligence seem to have found a recipe to delay procedures and use their immunity to not answer questions.

Red light, green light: In the last month, the lead investigator for the Beirut Blast, Tarek Bitar, has had to pause his investigation at least three times after complaints were filed against him by former ministers Ali Hassan Khalil, Youssef Fenianos, Nohad Machnouk and Ghazi Zeiater in the hopes of having Bitar removed from the investigation.

The attempts to block the investigation have also put into question the legitimacy of Lebanon’s judiciary and law enforcement, both affected by political interference.

For more on the investigation, be sure to read Dana Hourany’s piece here.

A fork in the road: Prior to the October 14 fighting, the Shiite duo, Hezbollah and Amal, threatened to resign from the government and topple the newly formed cabinet, unless Prime Minister Najib Mikati took action against Bitar and the investigation.

Analysts say that Mikati is left with two options: give in to their demands or resign. Neither option has a happy ending for Lebanon.

I spoke to analysts about Mikati’s options last week and can find the piece here.

Back to immunity: Bitar is still trying to bring the current and former politicians in for questioning for the investigation but, for several weeks, the politicians hid behind their immunity as a reason for not having to comply with his orders.

While their immunity was temporarily lifted, it is set to return on October 19, meaning that parliament would have to agree to lift it once again. Given Hezbollah, Amal and Marada’s opposition to the investigation, this process could take a long time.

The arrest warrant for that #BeirutBlast investigator Tarek Bitar issued for Ali Hassan Khalil who did not show up for his interrogation today. The warrant says that every police officer is charged with arresting him and taking him to the nearest prison. https://t.co/EgoIk8aJWp

Blame the victim: The attempt to close the investigation did not stop on October 14.

The very next day, spokesperson for the victims of the Beirut Blast, Ibrahim Hoteit, who lost his brother in the explosion, gave a statement in a video posted on social media where he called on Bitar to step down, blaming him for the bloodshed that took place the day prior.

On Saturday, several family members of the victims published a statement where they said that what Hoteit stated in his video does not represent them “in any way possible” and reiterated their support for the investigation.

The same day, Hoteit resigned from his position and denied that he was forced to give the statement, telling AFP that he had changed his opinion over fears of further violence.

Round them up: In the days following the October 14 shootout, 19 people, 17 Lebanese and 2 Syrians, have been arrested in connection with the violence.

No information has been released about the individuals in custody.

Show me the money: The lira reached the highest it has been since Mikati announced that he had formed a government at 21,000 to the dollar.

When the formation of the government was announced, the lira recovered a significant portion of its value, going from around 20,000 to about 14,000 to the dollar.

However, with a lack of action being taken by the Mikati government when it comes to instituting reforms, the lira has devalued once more and, with the recent events, it raises the possibility that it will continue to devalue.

Burning fuel: The week began with a fire at a fuel storage facility at the Zahrani power plant, which had recently shut down due to a lack of fuel, catching fire.

According to Energy Minister Walid Fayyad, the fire was caused by “mistake” when gasoline was being transported from one tank to another.

Fueling the crisis: Once again, the Lebanese government raised the price of fuel on October 13.

Lost: On Wednesday, October 13, a small plane crashed off the coast of Lebanon leading to a search and rescue mission for the two onboard.

The training plane, which belonged to the Lebanese aviation club, crashed near Halat, in the north of the country, during a flight off the coast of Lebanon.

The bodies of the two passengers were found on Friday, October 15.

There’s always a point where humor starts to kick in among Lebanese people after a tense day as a coping mechanism. The caption says “because corona is not a game”. pic.twitter.com/Lxxbps9ADE

While they were involved in a shootout that left dozens injured or killed and caused years of trauma for many in the area, including school children, at least gunmen took the Covid-19 pandemic seriously.

Image from a school near the site of #BeirutClashes — kids sitting in corridor as a protective measure from gunshots.

During the fighting on Thursday, children, who were currently in school, had to scramble to find cover due to the bullets and missiles that were filling the streets and air.

Podcasts: Medea Azouri and Mouin Jaber sit down with Reuters Deputy Bureau Chief Timour Azhari in the latest episode of Sarde After Dinner.

Ronnie Chatah shared his thoughts on how he sees the investigation into the port blast ending in the latest episode of The Beirut Banyan, released on October 13. It’s bound to end like the Special Tribunal for Lebanon ended, with all information discredited and thrown into conspiracy, he said.

Schools will be closed Monday in accordance with the celebration of the Prophet Mohammad’s birthday.

Hezbollah’s Secretary-General Sayyed Hassan Nasrallah is also set to give a speech on Monday, one week after he called on Beirut Blast investigator Tarek Bitar to be removed from the investigation and after the firefight in Beirut on Oct. 14.

On Tuesday, Tarek Bitar will meet with the Higher Judicial Council.