As the parliament is set to discuss lifting immunity for a group of politicians called for questioning in the Beirut blast probe, experts say a negative decision may enhance the impression that “they have something to hide”. 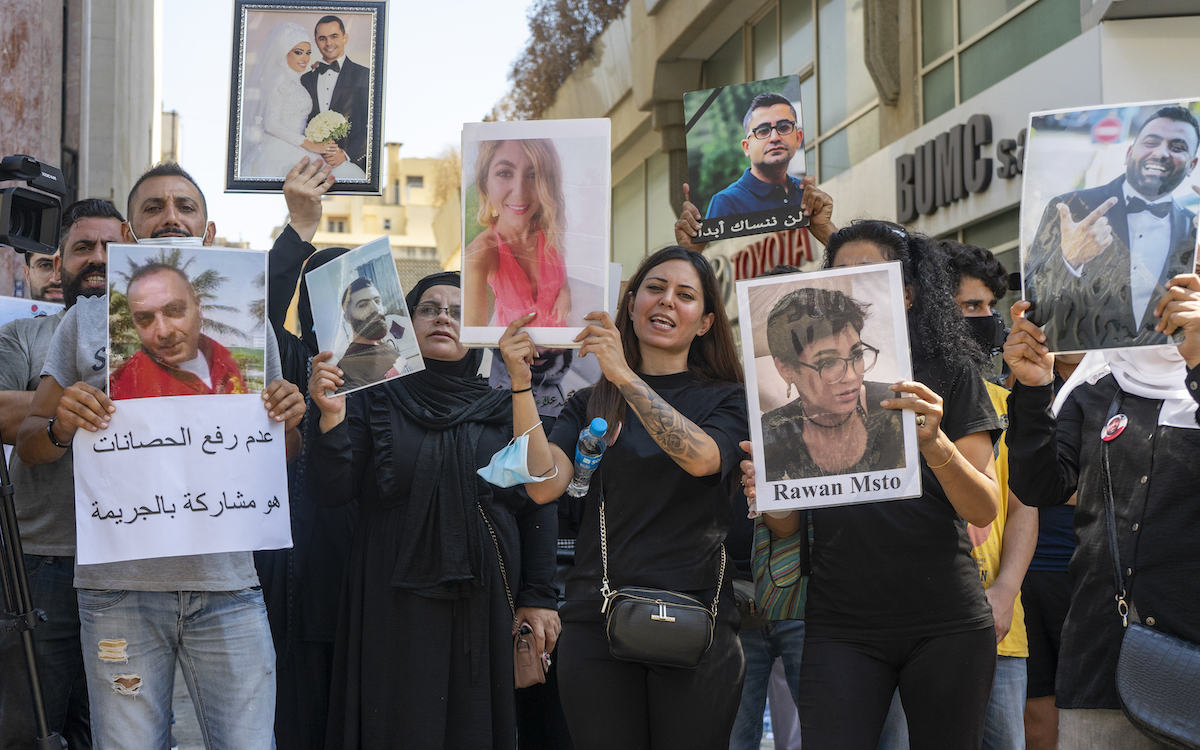 Why did they die?

Why were they at fault?

It was all Nohad Abdo could say about the loss of her sister’s son as she stood outside of Parliamentary Speaker Nabih Berri’s house in Ain Al-Tineh, Beirut.

The veteran politician held a meeting with the administration and justice committee on Friday to discuss lifting immunity for MPs and former ministers Ali Hassan Khalil, Youssef Fenianos and Ghazi Zeiter so that Tarek Bitar, the lead investigator into the Beirut port explosion, could question them.

“We’re here to demand justice and for the truth to be brought forward,” Abdo told NOW defiantly. “Whoever was responsible for the explosion should be publicly hanged. That’s all we want.”

Abdo, along with others who lost a family member in the August 4 explosion that killed over 200 in 2020, says she has become increasingly frustrated with the nearly year-long investigation into the cause of the blast which, so far, has yielded few results.

“I think that the families are growing more and more desperate by the day from feeling like they don’t know what happened to their family members and what really happened,” Anna Fleischer, program coordinator for the Heinrich Böll Foundation, told NOW.  “You can see it. They are protesting, they are in the streets, they are holding the pictures of the deceased person. I think that it’s quite clear. They want to be seen. They want to be heard. They want to be recognized.”

But that is not happening. The protests of the victims’ families where they ask for the end of impunity and justice are seldom joined by others other than the victim’s families.

However, in order to question Khalil, Zeiter and Machnouk, parliament first has to approve the removal of their immunity.

The former investigator, Judge Fadi Sawwan, was removed from the post and replaced with Bitar in February  after he had called politicians in for investigation without requesting institutions to lift their immunity. Based on this procedural flaw, Khalil and Zaiter – both members of  Berri’s Amal Movement – sued Sawwan and won the case at the Supreme Court. The court’s motivation for the ruling also included the fact that Sawwan had been affected by the explosion and his objectivity in the case was at stake.

Initially, after Bitar called a pool of journalists and disclosed on July 2 his plan to request all the permissions necessary from the Parliament, the Cabinet and even professional associations, such as the Bar Association, several MPs, including Khalil and Zeiter said they would comply with the investigation.

But the biggest waves were made by the head of the General Security, Abbas Ibrahim. The Minister of Interior Mohammad Fahmy said on July 2, that he would comply, he later changed his mind and denied that permission.

The decision raised concern in civil society and among rule of law experts who follow the investigation closely.

“While not surprising, Fahmy’s decision to reject’s Bitar’s request to prosecute Abbas Ibrahim for his role in the #BeirutBlast is disgraceful,” Human Rights Watch Lebanon and Bahrain researcher Aya Majzoub wrote on Twitter on Friday. “There can be no justice for the blast as long as high-level officials remain immune from prosecution.”

Civil society activists have also spoken against a public relations campaign meant to boost Ibrahim’s image. The highway leading to Beirut International Airport was lined with Ibrahim’s portrait and the slogan “the most honorable of men”. It is not clear who coordinated the PR campaign and paid for the banners.

On Friday, Ibrahim said he would comply with the law and publicly asked for the banners to be removed.

Being under investigation does not mean guilty

According to Fleischer, removing immunity for the current and former politicians would do a great deal to help move the investigation forward so that the Lebanese people can finally have answers to the events of August 4.

“It means that the investigation is moving forward and we definitely support any steps that are being taken as rule of law and anything that is taken in the Lebanese laws that exist,” Fleischer explained.

“I think that in terms of the entire country wanting to know what happened, especially the families of the victims deserving justice, they have a right to know because there are many steps to this investigation.”

Fleischer, however, stressed that even if immunity is removed, it does not mean that these people are guilty, just that the investigation is moving forward and that there will hopefully be more answers.

A month before the one-year anniversary, with many Lebanese angry at the fact that the investigation keeps going back and forth and the few steps forward have constantly been canceled, the public opinion may seem to be pushing for accountability. For many in Lebanon, those being called in for questioning are as good as guilty.

But Fleischer says that no one is guilty before proven guilty in the eyes of the law.

“Finding out what happened and figuring out the goings around and how it came about is very different than holding someone accountable,” she explained. “From our point of view, it means that lifting immunity within a rule of law does not equal guilt. It equals looking into any possible avenue and gathering information and trying to understand what happened that day and speaking to relevant people in the process.”

She stressed that if the Parliament ultimately decided to not remove the politicians’ immunity, it would only feed into the public perception that they have something to hide and are, in fact, guilty.

This perceived guilt was exacerbated when caretaker Interior Minister Mohammad Fahmy said that he would not allow Ibrahim to be questioned.

The minister of interior’s reversing his decision to allow Ibrahim to be questioned in the investigation raised many question marks.

While Fleischer acknowledged that “there are lots of discussions that are happening that are not visible to the public,” she added that all the necessary resources need to be made available to Bitar so that he is able to properly complete his investigation.

“If he requests people to be questioned then they are initially made available to him and then they are made not available, I think that this is a massive hindrance for the investigation,” Fleischer argued.

Others were also quick to condemn Fahmy’s decision reversal.

“Why would they decide not to remove immunity from Abbas Ibrahim as if he did nothing?” Ali Hassan Haydar, a family member of one of the Beirut blast victims, said.

“What does that mean? How do they know that?  Did they investigate with him?”

Some politicians also spoke out against Fahmy’s hindering of the investigation.

“I hope the Minister of Interior does not obstruct the investigation into the port explosion case,” MP and former Telecommunications Minister Boutros Harb told Al-Jadeed.

“I morally shame the Minister of Interior for this decision.”

The meeting in Ain Al-Tineh on Friday was inconclusive, as protesters called for an end to impunity outside Nabih Berri’s residence.

Deputy Speaker of Parliament Elie Ferzli, present at the meeting, stated that the committees decided to request documents and evidence from Bitar before they made a decision on lifting immunity.

“After reviewing Judge Tarek Bitar’s demand for permission to prosecute former minister Nohad Mashnouq and MPs Ali Hassan Khalil and Ghazi Zeaiter … and following lengthy discussions by the Parliament Bureau and the Administration and Justice Committee, chaired by Speaker Nabih Berri, it has been decided to demand the brief of evidence included in the probe, in addition to all documents and papers substantiating suspicions and relevant to those called in for questioning,” Ferzli said.

This, according to Fleischer, is a step in the right direction.

“Anything that goes into the direction of gathering actual evidence and testimonies is a step in the right direction and the investigator should be able to do his work unhindered and unintimidated,” she stated.

As long as there is no justice for the explosion, and as long as the investigation continues, the families of the victims say they will continue to advocate for their loved ones.

“We’re going to keep going until they remove immunity from everyone,” Haydar said.