MP Michel Douaihy’s departure from the Change Bloc has signaled the beginning of the end for the coalition of independent MPs, but analysts say that it also presents an opportunity for them to form new alliances that could allow them to have a more significant impact on Lebanon’s politics, or else they risk becoming irrelevant. 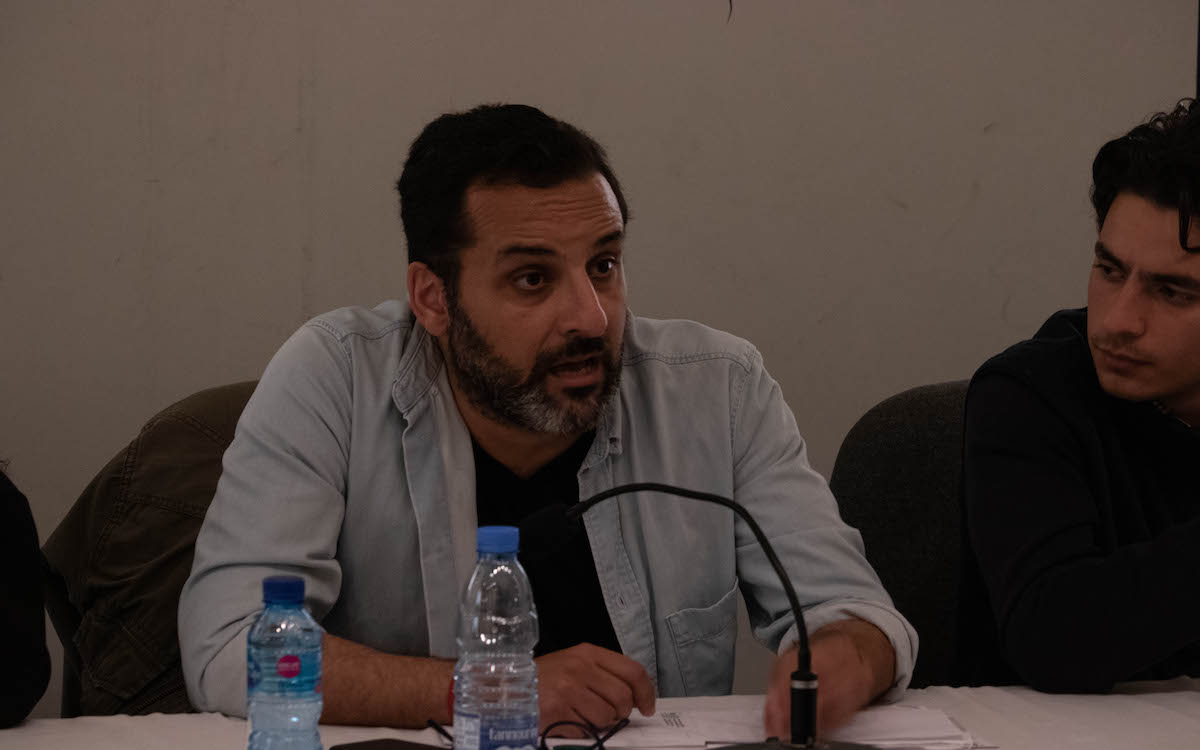 Michel Douaihy speaks at a Shamaluna event in Tripoli on April 3, 2022 in the lead up to the May 15 parliamentary elections. Photo: Nicholas Frakes, NOW

When “change” MP Michel Douaihy took to Twitter on Tuesday, October 18, few expected the bombshell that he would drop, which has the potential to alter the way that the Change Bloc in Lebanon’s Parliament does politics.

“I am permanently outside the 13 Change Bloc in its current form. I am in favor of turning the bloc into a monthly consultative meeting (or as necessary) with a full margin of freedom for all deputies on all policy issues,” he tweeted.

The departure of the MP for the northern city of Zgharta came as a shock to many who viewed the Change Bloc as a starting point for independent politicians to be elected to Parliament and begin changing the country’s politics.

Douaihy did not respond when asked to comment on his departure from the bloc.

However, analysts argue that it is not all that surprising that the bloc appears to be fracturing, given the vast array of political views present among the 13 opposition MPs. But, analysts agree, the Change MPs need to make sure that they continue working together, or else they could increasingly become irrelevant through their inability to influence Lebanon’s politics.

“They have different perspectives and, as a result, I’m not surprised that there are different priorities,” Michael Young, a senior editor at the Carnegie Middle East Center in Beirut, told NOW. “But there is a dilemma in which they find themselves. If they cannot function as a unified group with certain rules of any parliamentary bloc, then they are going to continue facing this problem of being irrelevant.”

When the 13 opposition MPs were elected following the May 15 parliamentary election, civil society groups and the thousands of Lebanese at home and abroad calling for change celebrated their ascension as a victory for the change movement, viewing it and as an opportunity to lay the groundwork for shifting the way politics are done in Lebanon.

Despite the new MPs’ united opposition to the traditional political parties and how politics in Lebanon has been done for the last three decades, the 13 do not necessarily have much else in common.

Practically all of them were elected without the support of a political party, and all come from different electoral lists.

In addition to this, some are more left-leaning, while others are closer to the center-left on the political spectrum.

But while they have their differences, for the last five months, the MPs have, for the most part, voted as one and supported each other politically.

When it came to the bloc’s presidential rescue initiative in September, they stood by one another as a united force.

However, as they have spent more time as elected officials, their differences have begun to increasingly show.

Following “change” MP Ibrahim Mneimneh’s removal from the Finance and Budget Committee, Marc Daou, another MP with the Change Bloc, tweeted about the build-up to Mneimneh’s removal, only for Mneimneh himself to comment that Daou’s statement was “not accurate” but did not elaborate further.

“It was a great success that 13 independent MPs made it to Parliament but I think that from the beginning it was quite clear that this is a highly diverse group of people that come from very different backgrounds even though most of them don’t have a party backing them and they still come from different political ideas and ideologies,” Kristof Kleemann, head of the Beirut office for the Friedrich Naumann Foundation, told NOW. “So, for them to be a coherent bloc becomes increasingly difficult once very hard decisions need to be taken and once it’s about different policies.”

There is this problem of relevance that they really have to address and deal with. If they can’t agree on basic rules and on a basic political platform and on basic rules on how the bloc functions, they’re going to continue looking divided.

Kleemann added that he believes that even more differences will continue to be revealed within the Change Bloc in the next few months, making it harder for the remaining 12 MPs in the bloc to stay as a united front.

According to both Kleemann and Young, the “change” MPs do not necessarily need to be a united bloc that agrees on everything, but they need to at least find some common ground so that they can continue working together, as they are unlikely to be able to accomplish much if they act as individuals.

The issue of relevancy

In a parliamentary democracy, coalitions are key to having any sort of influence and power.

Hezbollah, often viewed as the most powerful group in Lebanon, only holds around a dozen seats in Parliament but it is its alliances with the Amal Movement and the Free Patriotic Movement, as well as several other parties, that has allowed the group to be as politically dominant as they have been for well over a decade.

When the “change” MPs were elected, it was only natural for them to form their own bloc, separate from the other political parties that they vocally opposed.

As a group of 13 voting as one and a lack of any clear majority, they had some influence in Parliament to potentially be the tipping point as to whether a vote would pass or fail, rendering them into a group that other political parties need to court in order to gain their support.

Individually, though, they are much weaker and unable to boast the same amount of influence that they can claim when they are one bloc.

“There is this problem of relevance that they really have to address and deal with. If they can’t agree on basic rules and on a basic political platform and on basic rules on how the bloc functions, they’re going to continue looking divided,” Young cautioned.

“This puts them in a very unfortunate situation because it really isn’t a bad thing to have a pluralistic view but it’s clear up until now that they haven’t really been effective on certain issues simply because there is this problem of different ambitions and different members saying different things.”

Opposition MPs Mneimneh, Daou, Melham Khakaf, Rami Finge, Najat Auon Saliba, Halimé Kaakour and Cynthia Zarazir all either did not respond when asked for comment on the future of the Change Bloc, or said that they were too busy to speak.

For the time being, the remaining 12 opposition MPs are maintaining the Change Bloc, with Douaihy being the only outlier – something that could ultimately hurt Douaihy in the long run.

“He should be careful,” Young stated. “Anyone who leaves the bloc has to really consider what they are individually. All the members of the Change Bloc individually stand for very little.”

Douaihy may not be the only “change” MP outside of the bloc, though, as there are disagreements amongst the opposition as to whether or not they should negotiate and work with members of the traditional political establishment, in particular Kataeb and MP Michel Moawad, something that Kleemann says they will need to do if the opposition MPs hope to accomplish anything while in office.

“They will remain pragmatic if they find common ground,” Kleemann said. “In the common ground, they would stay and vote together. But there are some of those 13 that are realistic in the way that they say ‘Maybe we have to widen that scope to include some of the other groups in Parliament.’”

When the popular uprising began on October 17, 2019, there was a common message coming from the protesters: the people want the traditional parties out of politics.

After decades of political corruption and financial and economic mismanagement that saw politicians and their allies benefit through their positions and connections, the people wanted an end to “wasta,” the Arabic word for connections that often connotates the corrupt use of these connections to gain favors and political and financial advantages over the rest of the population.

Thus, when the 13 opposition MPs were running in the parliamentary elections, they ran on an anti-corruption and anti-wasta platform that looked to bring politics back to the people, rather than reserving it just for the country’s elite.

Following their election, civil society and pro-revolution groups kept a close eye on the 13, calling them out for any perceived mistakes, or whenever they were seen associating with members of the traditional establishment.

The opposition meeting and striking deals with the political elite is not inherently a bad thing, though, as by doing so, it presents the “change” MPs the opportunity to try and enact real changes and real reforms, something that would be impossible for them to do on their own.

“The civil society groups are watching closely what the 13 are doing,” Kleeman explained.

“But you cannot just judge them based on who is the purist among them. It is also important what kind of impact you can have and if you become too pure, then your impact is diminished. That’s why I think it is important for those of the 13 that are pragmatic to also look for other alliances in Parliament in order to have greater power and greater leverage in Parliament in order to drive some reforms.”

While Kleemann agrees that it is important for the 13 MPs to avoid becoming like the rest of the political establishment, “politics is about making compromises if you want to be effective” and that simply remaining “pure” by refusing to work with any of the traditional parties actually would be more detrimental for the Lebanese people as the MPs would essentially be excluded from political discussions.

In recent weeks, Parliament has been meeting to try and elect a new president, as the current president, Michel Aoun, is set to leave office at the end of the month.

During the last two votes, the opposition MPs refused to vote for any candidate, instead choosing to write phrases like “New Lebanon” on their ballots.

Should the 13 MPs negotiate with the other groups in Parliament, it would allow them to have a say in who they believe should lead the country forward as it continues to contend with the worsening economic crisis.

“Just being a ‘change’ MP is good in itself but it is also important what does this particular person or this particular party really stand for,” Kleemann stated. “At the same time, to be in politics, you also have to be pragmatic so it would also be important to look for other alliances in Parliament where you can push for a more kind of reformist agenda in Parliament.”

When it comes to dealing with the watchful eyes of civil society and pro-revolution groups, the MPs could help maintain their backing by being transparent and explaining why they sat down with a specific establishment party or why they decided to vote in a particular way.

Kleemann admitted that this balance between being an opposition politician that does not do politics in the same way that it has been done for the last three decades and being an effective MP is a “very fine line,” but it is a line that the 13 need to walk if they want to be effective agents of change.

As they move forward, the Lebanese people will continue watching the 13 “change” MPs to see if they follow through with their campaign promises of being the agents of change that Lebanon desperately needs.