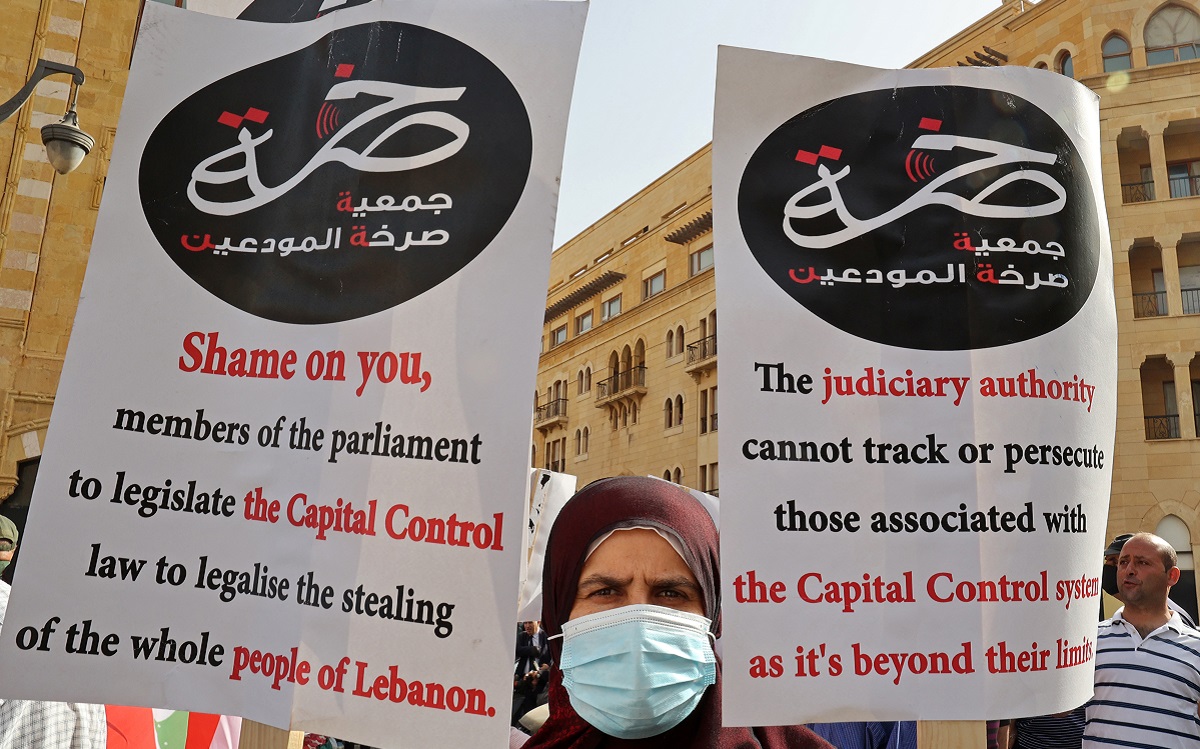 Lebanon’s elections are less than two weeks away and, this weekend, on May 6 and 8, the country’s diaspora will go to the polls around the world to cast their votes in an election that is likely to be an indicator of the direction in which Lebanon is headed.

Will a serious opposition finally gain a foothold in Lebanon’s political system? Or is the ruling establishment going to continue its dominance, shutting out the parties and individuals seeking to change the country?

There is little doubt that the traditional political parties will win a majority in this election. Just by sheer numbers alone, they are bound to continue making up the largest political blocs in parliament.

However, this is the first election since the October 17 popular uprising in 2019 and the August 4, 2020 Beirut port explosion. There are real opposition groups “change” candidates and parties running in the election that want to end Lebanon’s “politics as usual” in favor of a state that actually works for the people rather than for the country’s elite. And, for the first time, they actually stand a chance at winning several seats, upsetting the status quo that has existed in Lebanese politics since the end of the civil war in 1990.

Hello, I am Nicholas Frakes, the new host of NOW’s weekly briefing. We’ll dive together into what’s going on in Lebanon and what it really means.

Divided: The opposition is fractured and there is little unity between them outside of wanting to create some sort of change in Lebanon.

Rather than forming unified lists throughout the country, there are often multiple lists of “change” candidates, something that is likely going to divide the electorate, making it harder for the opposition to get elected.

Lebanese in Lebanon still have a little over a week to decide who they want to vote for. The diaspora has only days, depending on where they live in the world.

The diaspora is poised to play a significant role in this election with, according to Lebanon’s foreign ministry, nearly 250,000 Lebanese abroad registered to vote this time, as compared to approximately 93,000 who registered for the 2018 elections.

How many of them will actually vote is another issue.

More and more Lebanese are losing hope that anything will change and, despite opposition candidates running in most districts in Lebanon, some people are saying that they will either boycott the election or vote waraq baida, a blank ballot, because they do not have faith in anyone running in their districts.

For the Lebanese still living in Lebanon, the ongoing economic crisis continues to be a daily reminder of the hardships that they face. But the Lebanese abroad are also dealing with this in their own ways.

Thousands of Lebanese have been forced to leave their homes, their families and their friends because of the economic crisis.

Who really represents “change” in these elections? Can Lebanese take a leap of faith in voting for one of these new opposition parties that have little to no political record that they can reference?

Lebanon is at a crossroads with this election, and the decision of which path the country should take starts this weekend.

Last-minute changes: On Wednesday, May 4, Beirut Madinati, one of the opposition lists running in Beirut, announced that it was withdrawing its candidates from the Beirut II district in order to better focus on the Beirut I district.

The reaction from the Lebanese public following the announcement was swift.

One Twitter user poked fun at the group’s name, saying that since they are now only running in one of the two districts in Beirut, their name has become “Beirut I Madinati.”

But, for others, it was a much more serious matter.

When I put the question out on Twitter to see how voters in Beirut II, in particular Beirut Madinati’s supporters, felt about the announcement, one voter said that they were not likely to vote now that they withdrew their list.

So disappointed. Dont think will vote anymore. Their list was perfect especially Nahida

Others went the conspiratorial route, saying that Beirut Madinati was forced to withdraw its candidates in Beirut II because of “political money” so that lists “backed by foreign countries” would have a better chance at winning in the district. It’s rather clear where that narrative comes from. If not, look toward the South.

With Beirut Madinati’s withdrawal from Beirut II, there are two remaining major opposition lists running in the district, Beirut the Change, formed by various independents, and Capable, formed by Charbel Nahhas’s Citizens in a State candidates.

Escaping accountability: It has long been an unwritten norm that politicians in Lebanon run their political campaigns on false promises.

Each election cycle, they promise change or to fix things, but they hardly ever follow through.

On April 29, during a press conference, the younger Murr, who is running for a Greek Orthodox seat in the Metn district and whose candidacy was announced by his father, said that he did not publish a political program because he was not “raised to deceive people by telling them I will do this and that so that four years later they’d want to hold me accountable for it.”

On today’s episode of politics is dead, Michel Murr says he didn’t release any electoral program because: “I wasn’t raised to deceive people by telling them I will do this & that, so that 4 years later they’d want to hold me accountable for it.”
pic.twitter.com/GhVBTarz0f

The Murr family has been a political staple in Metn, with Murr’s grandfather, also named Michel Murr, representing the district from the end of the civil war until his death in January 2021.

Given that most successful political candidates run on some sort of platform, it seems that the political hopeful is looking to win with a one-word plan for reform: Murr.

The party of honorable women: The so-called “sheikh” Nazir Jashi sparked controversy in Lebanon as the Muslim month of Ramadan came to an end. He posted a video on social media calling on people to vote for Hezbollah in the upcoming election.

However, his support of Hezbollah was not what caused the controversy, as other Shiite figures, namely Mufti Ahmad Qabalan, the top Shiite cleric in Lebanon, have also thrown their support behind the Party of God and its fellow Shiite ally, the Amal Movement.

Rather, it was what Jashi said about Hezbollah’s opponents that led to the outrage.

“Whoever wants to see his daughters on the beaches of Jounieh and Al-Maamelten [i.e. where the cabarets are located]…let him vote for [Hezbollah’s opponents]” Jashi said. He called the Lebanese Forces a party supported by “Zionism” and “Wahhabism.”

This outrage led to Hezbollah releasing a statement condemning Jashi, who the group called an imposter, and said that he has no connection to Hezbollah.

Getting out the vote: Lebanon’s top Sunni religious leader, Abdel Latif Derian, called on Lebanese to vote during the upcoming May 15 election and urged those eligible to vote not to boycott it.

The Grand Mufti, during his Eid al-Fitr sermon, said that it was important for voters to seize “the opportunity to achieve change through the elections.”

Consistency or democracy: Parliamentary Speaker and head of the Amal Movement Nabih Berri had a message for the Lebanese diaspora before they head to the polls on May 6 and 8: vote for “national constants” and not “electoral promises.”

Berri, in his message, also said that the diaspora should vote for the “independence and reform of the judiciary.” He was probably addressing his constituency in his native Sierra Leone.

But for many Lebanese, voting for “national constants” would mean voting for the same people that brought the country to one of the worst economic crises that the modern world has seen, forcing them and their fellow citizens to leave the country.

Even when it comes to the independence of the judiciary, the Amal Movement has done more to oppose this notion than to actually support it.

When it comes to the Beirut Blast investigation, the Shiite party, along with its allies, has worked to stop Tarek Bitar’s investigation, especially as two of those accused are former Finance Minister and Amal Movement members Ali Hassan Khalil and former Public Works Minister Ghazi Zeaiter.

A dangerous voyage: Less than a week after a boat carrying 84 people, according to the UNHCR, looking to escape Lebanon and its ongoing and worsening economic crisis sank off the coast of Tripoli, the Lebanese military stopped another boat from departing the city.

According to the military, the boat was carrying 85 people heading to Europe on Friday, April 29, and detained the alleged smugglers who had collected around $400,000 from the desperate migrants.

Earlier that week, Tripoli saw two days of protest and gunfire after another migrant boat capsized on April 23.

The protests were sparked by outrage that the military had allegedly rammed the migrant boat, causing it to sink and leading to the confirmed deaths of seven of the passengers and the assumed deaths of those still missing.

This was not the first time that migrants had attempted the dangerous journey to Europe by boat, nor was it the first time that one of them sank trying to make the journey. And with the most recent attempt to flee Lebanon, it showed that it was not going to be the last.

Iraq lifts its ban: On Tuesday, May 3, Iraq announced that it was lifting its ban on some Lebanese products that had been previously prohibited -hips made from corn and potato, beer, soft drinks, table eggs, pasteurized milk and mineral water.

The move was praised by Lebanon’s industry minister, George Bouchikian, who said that it would allow for Lebanese products to compete with other sources, specifically highlighting Lebanon’s food industry.

Given Lebanon’s ongoing economic and financial crisis, the country is in desperate need of any income source that it can find, especially as several countries, such as Saudi Arabia, banned the import of Lebanese produce over its exploitation by smugglers to ship captagon around the globe.

Podcasts: It is not just politicians and journalists that have been busy this election season. Ronnie Chatah has been interviewing candidates from across the country from all districts and religious confessions. In his most recent episode, the Beirut Banyan hosted Najat Aoun Saliba, an independent candidate running in the Chouf district for one of the three Maronite seats.

Sarde After Dinner is also getting into the electoral spirit with its most recent guest, Diana Menhem, the managing director of Kulluna Irada, who breaks down everything that people need to know about the upcoming election.

It is not just Chatah who has been busy with the elections, the Happy Hour Show has had three new episodes in the past week, all dedicated to the election. In its most recent episode, host Ramzi Abou Ismail was also joined by Saliba along with two others running in the Chouf-Aley districts, Saoud Abou Chebel and Mark Daou.

Finally, the Lebanese Politics Podcast has returned after almost a year off the air and has gone back to its roots as an elections podcast. In their second episode since their return, Ben Redd and Nizar Hassan discuss the response to Saad Hariri’s retirement from politics, the perceived weakness of the Free Patriotic Movement and what all of this tells us about how financial interests interact with politics.

Also, if you are in the Lebanese diaspora and are registered to vote, do not forget to cast your ballot this weekend and make your voices heard.