Morocco until the end 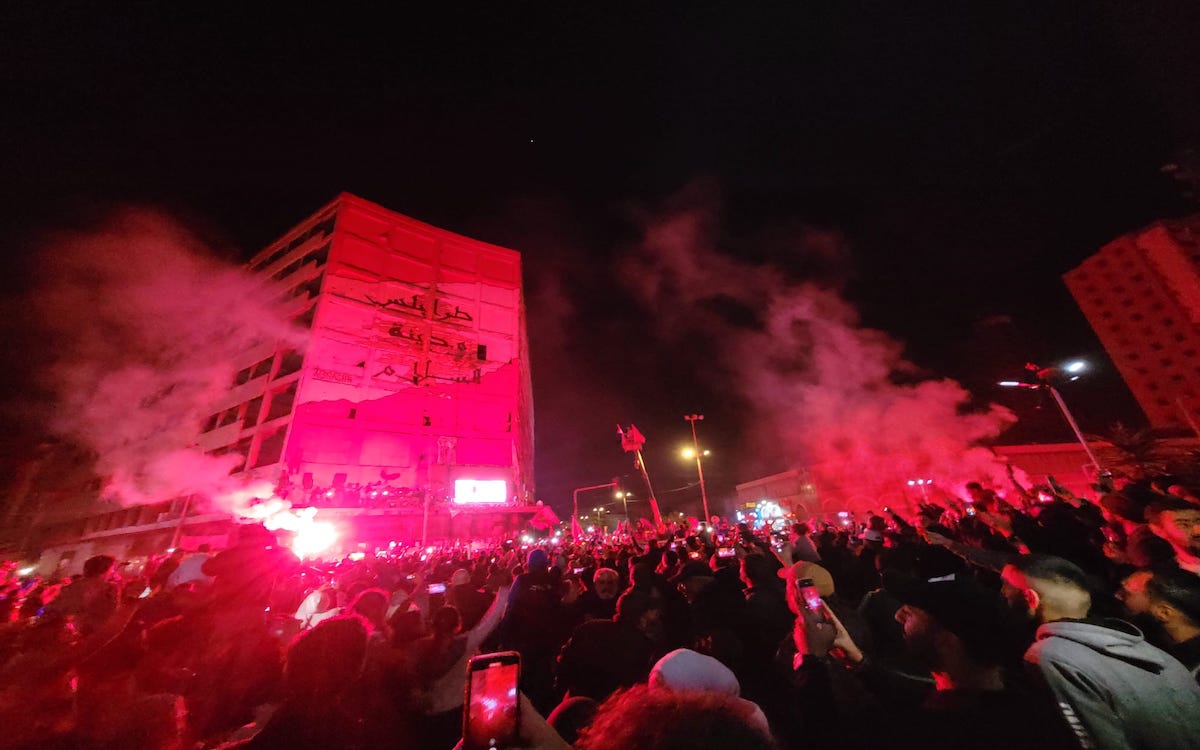 Tripolitans celebrate Morocco's 1-0 win on December 10 over Portugal which allowed the Atlas Lions to qualify for the semifinals. Photo: Philippe Pernot, NOW

When it was announced that the 2022 World Cup would be hosted in Qatar, there was a lot of celebration in the Arab world since, finally, their culture would finally be showcased in what is arguably the biggest sporting event in the world.

That being said, few in the Middle East and Africa really had much hope that an Arab or African team would actually do well, as none have previously made it past the group of 16 stage.

However, when the tournament began, it became clear that this was not going to be like any other World Cup. Early on, Saudi Arabia, not known to have a particularly strong football team, defeated Argentina, which is favored to win.

But the biggest surprise so far has been Morocco’s national team, though. The Atlas Lions stunned the world by being the first African and Arab team to advance not only past the group of 16 stage, but to make it all the way to the semifinals, defeating heavyweight teams like Spain and Portugal along the way.

This has led to a stream of widespread support throughout Arab and African countries and communities throughout the world. A team that, in a way, represents them has been one of the most dominating forces in this World Cup, so far remaining undefeated and only having one goal scored against it this entire tournament.

Even Arab fans of Brazil and Germany have raised the Moroccan flag in solidarity with their Arab brethren as they celebrate each and every match that they play in.

On social media, this support has also translated to jokes, with some fans saying that if Morocco happens to win the World Cup, then the Moroccan dialect of Arabic, Darija, which is often made fun of by other Arabic speakers as it has little resemblance to traditional Arabic, would replace Modern Standard Arabic as the dialect used by the Arab League.

If Morocco wins the World Cup, Darija replaces Fus7a as the official language of the Arab League. I don’t make the rules. https://t.co/n6UPWCimRb

After Morocco’s surprise win over Portugal, another fan said that while Ronaldo may be considered one of the greatest footballers of all time (or GOAT as it is colloquially known), that day was “Eid al-Adha,” a reference to the Islamic holiday that often includes the slaughtering of goats.

Ronaldo may be a goat, but today was Eid Al-Adha. 🇲🇦🇲🇦🇲🇦🇲🇦🔥🔥🔥

There were some problems, though, in the Beirut neighborhood of Achrafieh where fighting broke out between celebrators of Morocco’s win and people taking part in Christmas celebrations in Sassine Square.

While Morocco’s performance at the World Cup has brought the region together in a rare moment of solidarity that has surpassed political and sectarian divides, it is only a temporary moment of unity that will more than likely end after the international competition finishes. That being said, it should not take away from the historical significance of this and it goes to show that after setting aside politics and religion, it is possible for the Arab world to unite as one, even if it does not last forever.

The banker and the actress: Lebanese actress Stephanie Saliba was briefly arrested on Friday by Lebanese authorities as part of the corruption investigation into Central Bank Governor Riad Salame.

While no official reason for Saliba’s arrest was given, one judicial official said that investigative judge Imad Abdullah question the actress over “illicit enrichment and money laundering.”

She was also questioned by investigative judge Ghada Aoun who has been investigating Salame.

Saliba was later released on the condition that she make herself available for further questioning if requested.

Dekko was convicted on charges of producing and trafficking the drug that has boomed throughout the region.

This was the first time that Lebanon convicted the leader of a major captagon ring.

The conviction, however, will likely have little impact on the captagon production and trade in the region.

One last ride: Lebanon’s Parliament has, for a ninth time, failed to elect a new president as the country nears two months without a leader.

In an unsurprising turn of events, #Lebanon’s Parliament failed for a ninth time to elect a new president. The majority of votes were, like the last eight times, blank ballots or for Michel Maowad. Another session will be held next Thursday. #لبنان

This repeated failure to elect a president continues to surprise few in Lebanon as the opposition remains fragmented and unable to agree on a specific candidate, with several MPs still continuing to cast “protest” ballots, and the Hezbollah-aligned bloc only casting blank ballots until they unite around one candidate.

A tenth session has been scheduled for Thursday, December 15 but this will more likely than not go the same way that it for the last three months.

This will also be the final parliamentary session before the country’s politicians break for the holidays.

A growing divide: The 16-year alliance between the Maronite Christian Free Patriotic Movement and the Iran-backed Hezbollah seems to be increasingly on shaky ground as the FPM continues to refuse to support Hezbollah’s preferred presidential candidate, Sleiman Frangieh, and has even criticized the group in recent days.

On December 8, the FPM put out a rare statement that criticized its longtime ally in what is turning into a growing media war between the two.

In the statement, the FPM said that Hezbollah’s leadership had a “lack of clarity” when it came to the group’s statement as to whether or not they would attend cabinet sessions, which, without Hezbollah’s support, would not reach quorum and thus not be able to happen.

There has been increasing frustration within the FPM over its alliance with Hezbollah, which arguably lost the party seats in the May 15 parliamentary election, and as the FPM’s leader, Gebran Bassil, has his own presidential ambitions.

During an interview with local broadcaster LBCI, Bassil seemed to walk back some of his party’s recent remarks although he did say that while the Mar Mikhael Agreement between Hezbollah and the FPM has not failed, “it is at stake.”

In the end, though, the FPM can try all it wants, but it will eventually have to bend to Hezbollah’s will or risk being cast aside.

Another war on the horizon?: On Thursday, December 8, there were reports that Israel was threatening to bomb Beirut’s airport over the alleged smuggling of weapons from Tehran to Lebanon, a reference to Iran’s backing of the armed group Hezbollah.

Despite such reports, the possibility of Israel bombing Lebanon anytime soon is significantly low.

Yair Lapid, Israel’s caretaker prime minister, would not start a war when a new government is set to take over before the end of the year.

Incoming Prime Minister Benjamin Netanyahu is also unlikely to start a war so soon after returning to office. Even though he ran on a platform of security for Israel, Netanyahu would not try to start a war that, at best, has ill-defined results.

Cholera update: While Lebanon has gotten a better hold of the cholera outbreak in the country, there continue to be new cases.

There are currently 658 confirmed cases, 4,477 suspected cases and 23 deaths.

Sending a message: The Iranian government executed a prisoner who took part in the ongoing nationwide protests on Thursday, December 8, and is also believed the first of such executions to take place so far.

Mohsen Shekari was convicted by Iran’s Revolutionary Court of “waging war against God,” a conviction in Iran that carries a death sentence.

According to authorities, Shekari had repeatedly attacked a paramilitary guard with a knife and had disturbed public order by blocking a thoroughfare in Tehran. However, the Revolutionary Court sessions are often conducted in secret behind closed doors so it is unclear what, if any, evidence prosecutors had to back up such claims.

More executions are likely to take place as an attempted chilling method by the government to dissuade people from taking part in the protests.

Iran was previously hoping for sanctions relief by renewing the nuclear deal with the Biden administration, but talks have been stalled for months.

The government’s crackdown on the protests has also led to further sanctions that have contributed to the worsening economic situation.

Turkey has been threatening a ground invasion in the wake of a bombing in Istanbul on November 13, which the Turkish government has pinned on the Kurdistan Workers’ Party (PKK) and People’s Protection Unit (YPG) although both groups have denied any involvement.

Turkey considers both the PKK and YPG as terrorist groups. The US, a close ally of Turkey, designated the PKK as a terrorist organization but not the YPG which has been a key ally in fighting ISIS in Syria.

Continuing the fight: The US has said that it will expand patrols in Syria despite the continued tensions with Turkey on the Syrian border.

The patrols, which are done alongside the Syrian Democratic Forces (SDF), are meant to combat ISIS and prevent the group from gaining another foothold in the country.

The US has repeatedly warned Turkey about invading Syria, something that Erdogan has, for the most part, ignored.

While the US has around 900 troops stationed in Syria, there have not been any indications that they are planning on removing them despite the threat of an invasion by Turkey.

Another blow to ISIS: US special forces killed two ISIS officials during a ground operation in Syria on December 11.

The helicopter raid saw US military forces go after an ISIS official known by the nom de guerre Anas, who was killed in the operation.

Analysts have pointed to the fact that the US sent troops on the ground to go after Anas shows the significance of the official as other ISIS members have mainly been killed through drones and airstrikes.

Netanyahu’s government formation woes: Incoming Israeli Prime Minister Benjamin Netanyahu has requested an extra 10 days to form a government, as the deadline for him to finalize his new cabinet passed on December 11.

This extension was granted by Israeli President Isaac Herzog.

Netanyahu needs this time to pass legislation to allow several of his proposed ministers to be allowed to serve in the government, as some of them face bans due to previous criminal convictions, the most notable being Aryeh Deri who will serve as interior minister. Deri faces a ban from serving in the government because he was convicted for taking bribes when he previously served as interior minister.

Despite the delay, Netanyahu is widely expected to successfully form a government.

For the love of books: The annual Arab and International Book Fair took place in Beirut last week and was significantly smaller than in previous years. Despite this, NOW’s Dana Hourany found that the size of the fair did not deter book lovers from attending.

The occupation in headlines: Israel’s occupation of Palestine has been going on for decades and has been in and out of the headlines during that time. The Washington Post’s Shira Rubin looked at how the West Bank city of Hebron, while being a symbol for Israel’s far-right, has also helped put increased focus on the occupation.

Podcasts: In the latest episode of the Beirut Banyan, Ronnie Chatah spoke with George Wardini about the candidacy of Michel Moawad, the “change” MPs’ voting record in the presidential election and the many political dimensions of Lebanon.