”To protect and to build”

With parliamentary elections fast approaching, Hezbollah is looking to build on the gains that it made in the 2018 election, with analysts saying that their influence could potentially spread outside of Shiite-dominated areas, in communities where there is a representation vacuum. 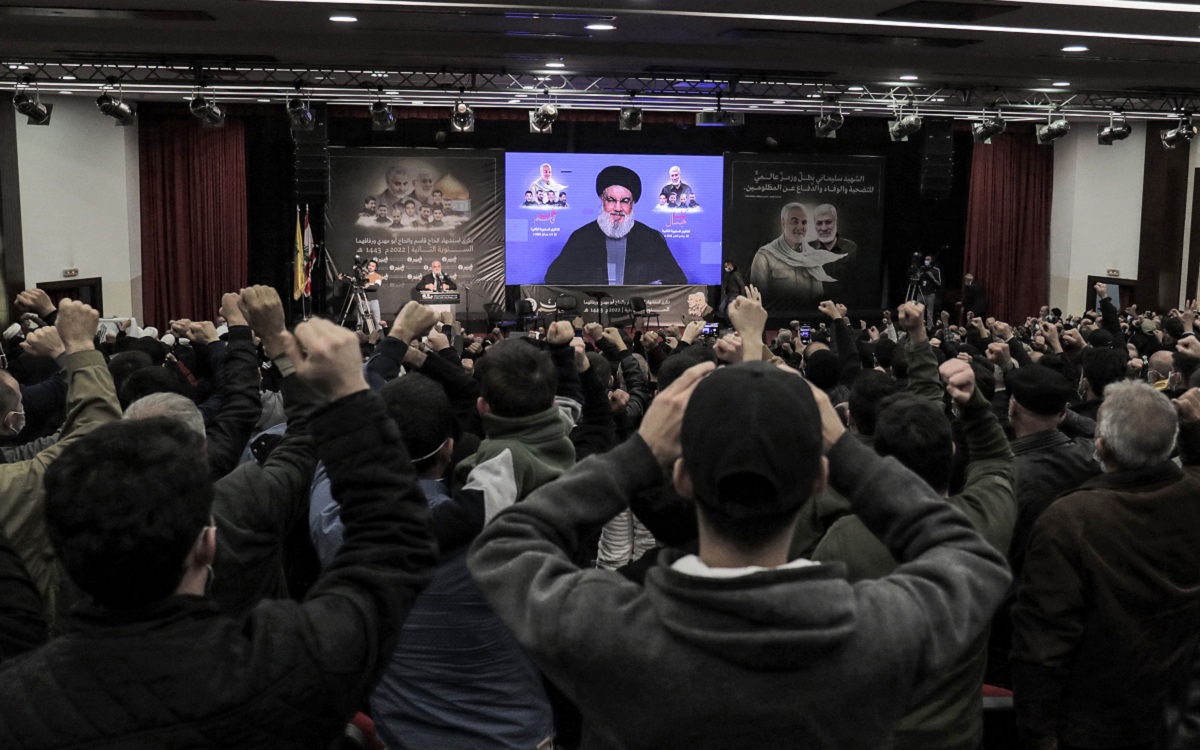 People cheer as they attend in a hall in a school in the southern suburb of Lebanon's capital Beirut on January 3, 2022 a televised speech by the head of the Lebanese Shiite movement Hezbollah Hassan Nasrallah during a memorial service marking the second anniversary of a US drone strike that killed the top commander of the Iranian revolutionary guard corps (IRGC) Qasem Soleimani alongside Iraqi commander Abu Mahdi al-Muhandis. Photo: Anwar Amro, AFP.

We stay, we protect and we build.

According to Hezbollah’s secretary-general, Hassan Nasrallah, this will be the group’s electoral slogan for the upcoming May 15 elections, which he announced during his February 16 speech commemorating the members of the party that had been killed since its inception in 1982.

“Yes, we build, serve, and work in the service of our people, and in all the places where we worked, we used to do that,” the Hezbollah leader stated during the televised address.

But there are many differences between what Nasrallah says on television for the benefit of the entire Lebanese population and what other Hezbollah officials say to the electorate at meetings held in Hussainiyah.

“The upcoming parliamentary elections are tantamount to a July political war, because they want our weapons, our resistance, and our society so that the word in our country is for Israel and America,” he told the audience, as quoted by the National News Agency. “The Americans, the Israelis, and the Europeans want our arms, resistance and society, to come to a parliament that can elect a president of the republic who forms a government that can do whatever they want.”

He also said voters get paid $50-100 to cast their vote for pro-Western forces.

Mohanad Hage Ali, a fellow at the Carnegie Middle East Center in Beirut, says that so far, Hezbollah has shown little interest in focusing its efforts on adding to the nearly dozen seats it holds in the current parliament. The party faces no real opposition in the territories that the group itself is running in.

Rather, Hage Ali says that what matters to the group is making sure that its allies do well in the elections, and potentially expanding its role in the Sunni community now that Saad Hariri and his Future Movement are no longer running.

“Hezbollah’s focus in these elections seems mostly on deploying the Shiite vote to increase the chances of their ailing allies, rather than winning against their weak and disorganized Shiite adversaries,” Hage Ali told NOW.

Building on the past

Hezbollah’s 2022 election slogan is nothing new to supporters of the group.

“The party added today ‘We will stay.’ That is, the party will continue and will continue its path of construction and resistance,” Beirut-based Hezbollah analyst Kassem Kassir told NOW.

When it comes to protection, Nasrallah expressed support for the Lebanese Armed Forces and insisted “on the role of the Lebanese army and protect it, insist on the need to support it, and open the door to the rest of the world that wants to help it” all the while arguing that the role that the armed wing of Hezbollah plays is just a significant when it comes to protecting Lebanon.

“It is sufficient for this environment to protect the resistance and not to abandon it and embrace it to be a partner in all the victories that have happened to date,” Nasrallah said.

However, Nasrallah did not elaborate much on what was meant by building.

During the 15-year Israeli occupation of Lebanon, which ended in 2000, and the July 2006 war between Hezbollah and Israel, the Jihad al-Bina foundation, Arabic for Jihad of Construction, was set up by Hezbollah helped to rebuild homes damaged or destroyed in the fighting.

Since these conflicts, though, there has been little need for the group to utilize this foundation as there have been few if any reconstruction needs.

According to Kassir, Nasrallah’s idea of building is more of a metaphorical and ideological concept rather than literal, physical construction.

“The Party is preparing to launch its electoral program, and it wants to focus on internal issues and how to confront the economic, social and living crises,” Kassir stated.

Hage Ali disagrees with this notion, arguing that Hezbollah has ambitions to physically grow and build on its already dominating influence in Lebanon.

Hezbollah’s attempt to supply diesel and gasoline during the energy crisis will be replicated in other contexts, basically through development projects in Shiite areas and beyond perhaps, depending on financial capacity.

“I think this is quite literal,” the analyst said. “Given how the Vienna talks are moving forward, one should expect a major Hezbollah initiative in case Iran’s financial capability is restored. A development plan as such can go a long way in Lebanon. So the word “build” here could mean a post-war reconstruction or an actual non-state development plan in the next phase.”

Hage Ali looked specifically at Hezbollah’s importing of Iranian fuel in September 2021 when Lebanon was in the midst of a crippling fuel crisis amid the worsening economic crisis, and explained that if a deal is struck between Iran and the United States, then Hezbollah would likely receive more funding from Iran. This would allow them to not only replicate the fuel importing, but potentially expand it into other infrastructural programs in and outside of the Shiite community.

With Lebanon continuing to face a devastating economic crisis, which the World Bank called “one of the top 10, possibly top three most severe economic collapses worldwide since the 1850s,” the possibility of having programs that ease the strain of the economic crisis could be welcomed throughout Lebanon, even in areas that have usually been opposed to the Shiite group such as Tripoli.

“Hezbollah’s attempt to supply diesel and gasoline during the energy crisis will be replicated in other contexts, basically through development projects in Shiite areas and beyond perhaps, depending on financial capacity,” Hage Ali stated.

“The organization could try to expand beyond the current relief support it’s providing for the communities in Shiite areas. They have created a great deal of propaganda around their co-ops and diesel shipments and could replicate this around let’s say a couple of factories and some development and support for local production efforts. This could happen, and would go a long way in political branding.”

While these might be Hezbollah’s long-term goals, their immediate focus is on the elections and making sure that their allies in the Christian and Sunni communities not only regain their seats, but win more.

Since Hezbollah first entered the Lebanese political sphere in the 1992 elections, the party has steadily gained more seats and power. But what propelled Hezbollah into a serious political force was after the Shiite party and the Maronite Christian Free Patriotic Movement signed the Mar Mikhael Agreement in 2006, just before the July war with Israel.

This agreement gave Hezbollah a powerful ally in a large Christian party in Lebanon and formed a long-lasting coalition that has served to empower the group and which helped propel the FPM’s founder, Michel Aoun, into the presidency.

Sixteen years later, the agreement still stands, although the FPM has started to express concern over the alliance. Both Aoun and the leader of the FPM, Gebran Bassil, who is also Aoun’s son-in-law, stated that the agreement might need to be renegotiated.

On February 5, Hezbollah, the FPM and Amal Movement, Lebanon’s other Shiite party headed by Parliamentary Speaker Nabih Berri, announced that they would form an alliance for the 2022 elections.

With Hezbollah and Amal facing little serious opposition in their electoral districts, Hezbollah is now focusing on making sure that the FPM and its other allies do well in the election in order to maintain the alliance’s majority in Parliament.

“The strategy is ensuring Gebran Bassil’s survival,” Hage Ali said. “Ensuring Gebran’s survival and trying to carve out a share of Sunni representation.”

“The Party seeks to support its allies first,” Kassir agreed. “It is ready for dialogue with the new groups that may enter Parliament in order to present a reform project.”

The FPM has continued to be the dominant Christian party in Lebanon, but following the clashes in Tayyouneh, an area on the border of the Christian-dominated Ain el-Remmaneh and Shiite-dominated Chiyeh neighborhoods in Beirut, on October 14, the FPM’s alliance with Hezbollah, whose supporters took part in the deadly shootout, reflected badly on the Christian party.

In addition to this, it helped bolster Samir Geagea’s Lebanese Forces, a Christian party that is in staunch opposition to Hezbollah, image as the defenders of Lebanon’s Christians.

Because of this and the growing discontent among Lebanese Christians with Hezbollah, it opens up the potential for the FPM to lose seats to the LF which poses a serious concern for the Shiite group.

In Batroun, Bassil’s electoral district, Geagea announced that the LF would be running former MTV editor Ghaith Yazbeck for one of the two parliamentary seats in the district.

The gap left by Hariri and his Future Movement also poses a lucrative opportunity for Hezbollah, which has reportedly already made moves to send aid to impoverished communities in Akkar.

Without the Future Movement running in areas like Tripoli, it allows for other allies, such as Prime Minister Najib Mikati’s Azm Movement, to make gains.

“The worst case would be a crushing defeat to the Bassil bloc, basically getting a smaller bloc than LF, while failing to grab some of the Hariri vacuum,” Hage Ali said. “This would lead to a reset to the 2005 to 2018 era when anti-Hezbollah majorities dominated the parliamentary vote.”

On the opposite end of the spectrum, if Bassil and the FPM are able to hold its Christian majority in Parliament and Hezbollah’s Sunni allies are able to win more seats now that Hariri is no longer the dominating Sunni force, then that would go a long way for Hezbollah to continue its dominance in Lebanon.

“The best-case scenario would be increasing or maybe doubling their Sunni allies’ bloc, currently at six, with Bassil surviving this with the least possible damage, by maintaining a Christian bloc which is larger than the LF, or at least equal,” Hage Ali explained.

“If this happens, and they can maintain with their allies a majority in parliament, losing some on the Christian front, and gaining some on the Sunni one, this would be a success for the organization.”