Of the port blast anniversary, falling silos, calls for an international investigation, stolen grains leave Lebanon, Ukrainian grain shipment delayed, Hezbollah threats against Israel, a prison break in Beirut, a ceasefire in Gaza, a heatwave in Iraq, funerals for Iranian officers killed in Syria and Iran demands release of its citizen in Saudi Arabia. Your weekly update from Lebanon. 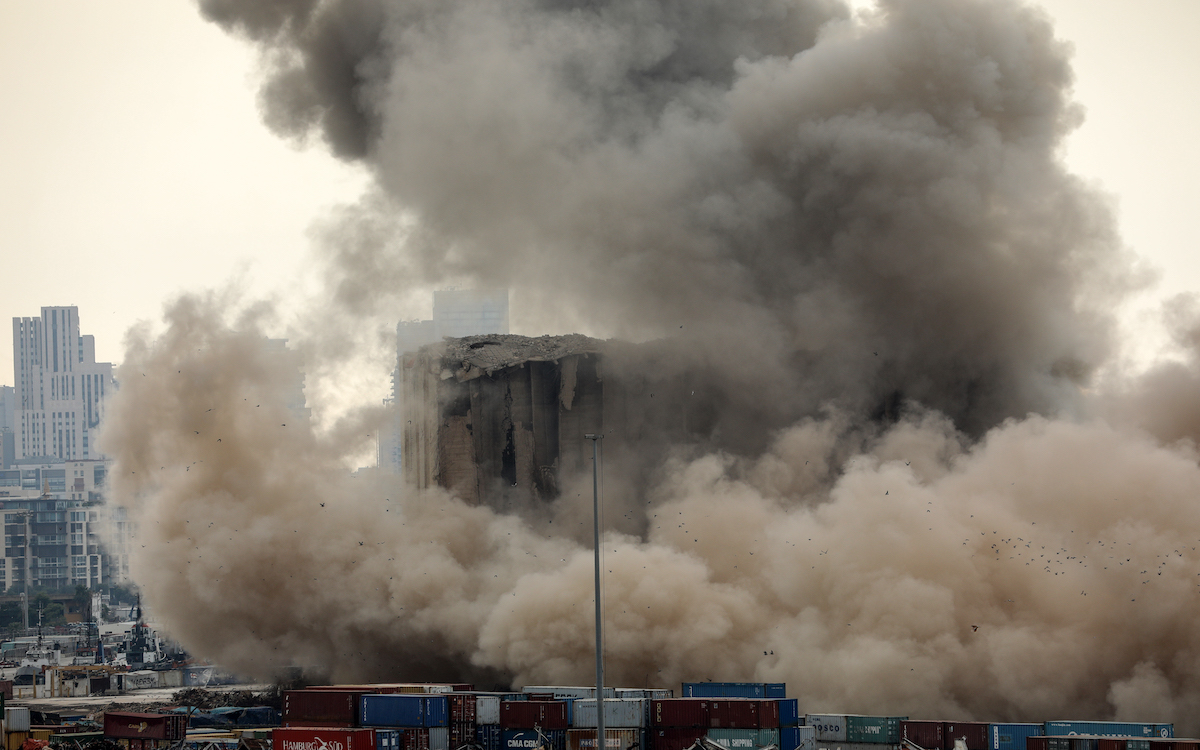 Heavy dust rises as part of the grain silos in the port of Beirut collapse, due to an ongoing fire since the beginning of last month, on August 4, 2022, on the day that crisis-hit Lebanon marks two years since a giant explosion ripped through the capital. Several more grain silos damaged by the 2020 Beirut port explosion collapsed today, as hundreds marched toward them to mark the second anniversary of the disaster. Photo: Ibrahim Amro, AFP

It has been two years since Beirut’s port exploded on August 4, nearly demolishing half of the Lebanese capital, killing over 200 innocent people and injuring thousands more.

Little has changed in those two years.

Beirut is still recovering and trying to repair the physical damage to the various neighborhoods. The psychological damage is something that is going to take much longer to heal.

The investigation into the blast is stalled indefinitely due to political decisions made by caretaker Finance Minister Youssef el-Khalil, who is close to Parliamentary Speaker Nabih Berri.

Fewer and fewer people speak of the investigation at this point, knowing that any semblance of justice is likely far away.

The silos in Beirut’s port, which have, for the last two years, served as a constant reminder of the crime committed against the city’s people, are falling apart.

Just days before the anniversary, a section of the silos came crumbling to the ground along with the hopes of many people who wanted to believe that as long as the silos remained, so did the possibility of justice.

Then, as the hundreds of people marching through Beirut’s streets to commemorate that fateful day approached the silos, another section collapsed. This happened, in some twisted form of poetry, at almost exactly the same time that the 2,750 tons of ammonium nitrate that were improperly stored in Hanger 12 detonated and forever changed the country.

Two years have come and gone with little to show.

Hopefully, people will not be able to say the same thing next year.

Finding the facts: Several local and international organizations have called on the United Nations Human Rights Office to send a fact-finding mission to Beirut to look into the port explosion.

This call comes as the Lebanese investigation has been stalled since December 2021 due to lawsuits filed by two of the accused, Ghazi Zeaiter and Ali Hassan Khalil.

In addition to the local and international organizations calling for a fact-finding mission, UN experts also called for an international investigation, saying that this was one of the largest non-nuclear explosions in history but “the world has done nothing to find out why it happened.

The UN rights council will meet in September, but it is unclear if they will put forward a resolution to establish a fact-finding mission.

More talk: Hezbollah Secretary-General Hassan Nasrallah warned Israel against making a “miscalculation” toward Lebanon, comparing it to what he called Israel’s current mistake by launching a pre-emptive strike on Gaza.

During his Saturday speech to commemorate Ashoura, the annual mourning of the killing of Imam Hussein, the grandson of Prophet Muhammed, at the battle of Karbala, Nasrallah said that the armed group was monitoring the situation in Gaza and he believed that the “resistance” would emerge victorious in the end.

Nasrallah also briefly addressed comments made by caretaker Israeli Finance Minister Avigdor Lieberman who said that Israel would destroy Beirut’s southern suburbs in the event that Hezbollah made any sort of attack in the Karish field.

Hezbollah and Israel have long traded a war of words since their last confrontation in 2006, but neither side has made any real effort towards an armed confrontation.

Stolen grains: A ship that the Ukrainian embassy in Lebanon claims is transporting stolen Ukrainian grains has departed the Lebanese port in Tripoli after being held for several days for inspection.

The Laodicea is allegedly transporting 10,000 tons of grains that Russia stole from Ukraine following its invasion, but Lebanese authorities have said that found no evidence to support this claim.

The ship has previously been sanctioned by the US for its affiliation to the Syrian government.

Syria’s transport ministry said that the ship arrived in the port of Tartus and was being offloaded after it had stopped in Tripoli to give some flour to a Lebanese company.

Stalled: The first shipment of Ukrainian grain since Russia’s invasion of Ukraine that is destined for Lebanon has been delayed for unspecified reasons.

According to a trader who spoke with AFP, the shipment could be sold elsewhere and not even come to Lebanon if no one is able to buy its cargo.

Lebanon is in the midst of a bread shortage with people having to wait in long lines in front of bakeries in the hopes of getting a single packet of bread with the bakery’s entire stock often being sold out quickly.

On strike: Lebanon’s Association of Banks announced that they would be going on an open strike starting Monday, August 8.

The Association decided on the strike following “malicious lawsuits against banks, in which some arbitrary and populist rulings are being issued for purposes that are no longer hidden from anyone.”

Depositors in Lebanon have not been able to access their money since the start of the ongoing economic crisis in 2019.

This has led to some people successfully suing the banks to gain access to their money with continued calls for a restructuring of the country’s banking system and for the banks to carry the brunt of the losses as Lebanon tries to pull itself out of the crisis.

Escape from Adlieh: On Sunday morning, 31 prisoners at the jail in the Justice Palace in Beirut escaped by dismantling windows.

Security forces did not comment on the operation to retrieve the escaped prisoners but confirmed that they were in pursuit of the prisoners.

The Adlieh jail was originally intended to be a garage but was repurposed as a jail during the Syrian occupation of Lebanon and lacks many of the basic health and safety standards required.

Israeli strikes on Gaza: After a weekend of airstrikes that killed over 40 people, including a five-year-old girl, the militant Islamic Jihad group and Israel agreed to an Egyptian-brokered ceasefire.

Islamic Jihad retaliated with its own rockets after its chief of operations, Tayseer Jabari, was killed on Friday. The following day Israel killed Islamic Jihad’s head of operations in Southern Gaza, Khaled Mansour.

Too hot to handle: Temperatures in Iraq reached 50 degrees Celcius over the weekend, forcing the power grid to temporarily shut down in parts of the country.

The Basra, Dhi Qar and Maysan regions all reported a second night of power outages, plunging millions into darkness and leaving them with few options on how to combat the heat, with some parents driving their children around for hours as the air conditioning in the car was their only source of cooling. This has led to protests in the southern parts of the country.

Iraq is ranked fifth in the world for countries most vulnerable to the impacts of climate change.

Current weather forecasts do not show the temperature getting any cooler this week.

A battle of wills: Supporters of the Shiite cleric Muqtada al-Sadr are demanding that Parliament be dissolved and early elections held after they occupied the Parliament building in Baghdad’s Green Zone for several days.

The protests by al-Sadr’s supporters come after a months-long political stalemate where Parliament has been unable to choose a new president and prime minister.

In response to the block, al-Sadr ordered his MPs to resign from Parliament in the hopes that it would create a breakthrough in negotiations but this only led to Iran-backed MPs from the Coordination Framework, al-Sadr’s main political rival, gaining more control in Parliament and allowing them to propose a pro-Iran prime minister in Mohamed al-Sudani.

A proposal was made to al-Sadr that his supporters would stop occupying Parliament and, in return, the legislature would remain closed, preventing his Shiite rivals from forming a government.

The funeral: Iran held a funeral for several officers in the Revolutionary Guard Corps whose remains were recovered from the village of Khan Tuman, south of Aleppo.

Five officers were buried, including General Abdollah Eskandari, who was known as the “headless general” after he captured and beheaded Syrian rebels in May 2014.

Iran has been heavily involved in the war in Syria, sending its officers to assist Syrian government forces in their bloody fight to retake the country. Iran-backed Hezbollah also sent fighters to Syria to assist the Syrian regime.

Detained: Iran has demanded the release of an Iranian national who has been locked up in Saudi Arabia since this year’s Hajj pilgrimage to Mecca.

Iraq has served as a mediator between Iran and Saudi Arabia since the two broke ties following the execution of the prominent Saudi Shiite Nimr al-Nimr in 2016.

Saudi Arabia has yet to acknowledge the detention.

A national army: Most countries have a single, unified armed military. Lebanon, though, has two. One is the Lebanese Armed Forces while the other is the armed wing of the Shiite group Hezbollah. Since Hezbollah is subservient to Iran and has its own stated goals, this poses a problem over who has the ability to wage war in Lebanon. Adnan Nasser looks at the need to modernize Lebanon’s national army and how it would help to combat Hezbollah’s narrative.

Turning the page: For New Yorkers, September 11, 2001 will be a day ingrained in them for the rest of their lives. In 2011, the leader and mastermind of the attack, Osama bin Laden, was killed by Navy SEALs in Pakistan. Now, Al-Qaeda’s new leader and bin Laden’s former number two, Ayman al-Zawahiri, was killed in a drone strike in Afghanistan. NOW’s David Isaly reflected on the killing and what it means for the United States and current shifting geopolitics.

The long road to justice: Since the investigation into the August 4 explosion began two years ago, it has constantly faced opposition from the country’s politicians who, ironically, promised that anyone involved would be punished. I wrote about the investigation two years later and if Lebanon will ever see justice for the blast.

A glimmer of hope: On the second anniversary of the port explosion, hundreds of people marched throughout Beirut to commemorate the tragic day. While little has changed in that time, NOW’s Dana Hourany saw a small glimmer of light at the end of the tunnel.

In poor taste: The anniversary of a horrific day such as August 4 should be treated with a light hand.

With over 200 dead, thousands injured physically and an incalculable number of people damaged psychologically, it is a day that should be given the gravity and respect that such a somber day requires.

Apparently, not everyone understood that as there was a photo shoot of a model in makeup that made her look like she was injured in the explosion while she looked out onto the port.

this can’t be fucking real.. pic.twitter.com/UdAykcntgs

It is easy to see what they were going for with the shoot, but it is safe to say that this idea should have been scrapped as soon as it was brought up.

Podcasts: On International Justice Day, Ronnie Chatah and others sat down at Station Beirut to discuss what justice looks like in Lebanon, as well as what it should look like. For the latest episode of the Beirut Banyan, Chatah brings that conversation to you.