Too little too late

Of a famous singer dying in a car crash, increasing gas prices, threats against the Saudi embassy, migrant bodies found off the coast of Tripoli, deaths in Roumieh prison, a potential capital control law, the silo fires almost extinguished, the Lebanese National Basketball Team win against India, airstrikes in eastern and western Syria, fighting in Tripoli, Sadr announces his exit from politics, Israeli settlers enter Al-Aqsa, and Morocco recalls its ambassador to Tunisia. Your weekly update from Lebanon. 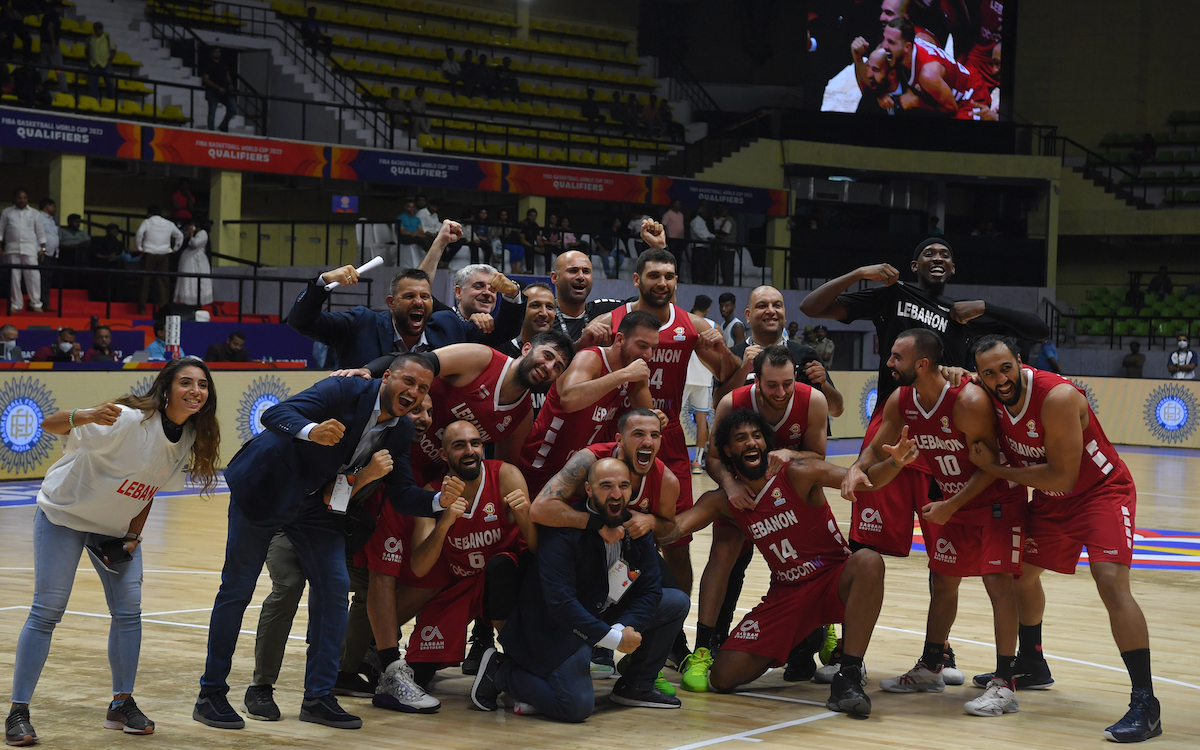 Given Lebanon’s continued crises, whether it be in regard to electricity, gas, flour, or water, there never seems to be any good news.

And why should there be?

With Lebanon’s population living under such terrible conditions, is it even worth it to try to find “happy” stories that might come off as an attempt to erase the country’s suffering?

Though the news is often bleak, and things just keep getting worse, Lebanon’s National Basketball team has brought some good spirit to the country recently.

Lebanon’s National Basketball Team was one match away to qualify for the FIBA Basketball World Cup 2023 after the team’s latest victory over the Philippines last week, which would be the fourth time in the country’s history.

The Cedars faced the Indian team on Monday, August 29, winning and thus qualifying for the World Cup.

Besides their accomplishments on the court, the team has not been silent regarding its contempt for Lebanon’s political establishment, with one of the team’s stars, Wael Arakji saying on Facebook last month “tell him [Mikati] we don’t need his congratulations and we’re trying to clean the shit he and his fellow politicians put us in. So he can keep his mouth shut itll be better.”

Indeed, Arakji’s words resonated with many Lebanese, as their disdain for the political class that has starved them and humiliated them continues.

The basketball team is thus a worthy national symbol of Lebanon’s potential, but also frustrations.

And, in my opinion, Lebanon’s National Basketball Team, and, consequently, the Lebanese people, deserve a win.

An avoidable tragedy: Singer George al-Rassi hit a concrete barrier with his car near the border on the Damascus-Beirut highway while returning to Lebanon from a concert in Syria, killing him and his passenger.

The accident has led to outrage on social media, as users and activists point out Lebanon’s lack of road safety.

YASA for road safety pointed out that if a crash cushion had been installed, al-Rassi might still be alive.

The group also released a video of the approach to the barrier that al-Rassi hit, as it essentially appears out of nowhere in the middle of the road. Al-Rassi is allegedly not the first to have died from the same barrier.

Lebanon’s road safety was not great before the crisis and has only gotten worse since then. Deadly accidents for the month of August are shockingly high considering the lack of fuel and decrease in traffic.

Gas prices up again: The price of gasoline continues to rise in crisis-stricken Lebanon.

Allegedly, due to the increased demand in Europe and shady business practices, Lebanon’s oil imports have decreased, putting even more pressure on the country’s essentially non-existent energy sector.

Though Iraq agreed to renew a one-year deal to provide Lebanon with fuel for its power plants, the positive effects of the said deal have yet to be seen.

Embassy threats: A Saudi national wanted by the kingdom is alleged to have made violent threats against the Saudi embassy in Beirut last week, leading to an investigation.

Though the man is thought to reside in the Hezbollah-dominated southern suburbs of Beirut, he is now said to be in Syria.

Some in Lebanon’s government have been trying to improve ties with the kingdom, but actions like this only serve to heighten tensions.

Sunken hopes: Renewed searches for the bodies from the sinking of a migrant boat off the coast of Tripoli have continued to make headway.

The navy deployed a submarine for the search, with the wreck being found on Wednesday and 10 bodies being recovered shortly after.

Survivors of the incident, which occurred in April, say that their vessel was rammed by the Lebanese navy, while the military claims the migrants’ boat collided with a navy vessel while trying to escape.

The next step will likely be to retrieve the boat from the sea.

Trouble in Roumieh: Families of prisoners at the Roumieh prison, Lebanon’s largest detention facility, are claiming that a mysterious virus has been killing detainees, prompting authorities to launch an investigation.

The Prisons Administration said that it has not ruled out drug overdoses as a potential cause.

Roumieh is highly overcrowded, which has led to mounting discontent among inmates, with some prisoners threatening a mutiny if conditions are not improved.

Too little too late: The Lebanese Parliament has recently begun a push to implement a capital control law almost three years after Lebanon’s economic crisis began.

Even though Lebanese banks implemented informal capital control laws, such as limiting withdrawals and transfers, in the wake of the crisis, the government has stalled any formal legislation since then.

The International Monetary Fund (IMF), which has been negotiating with Lebanon over economic reforms since May 2020, has also recommended capital controls.

Critics of the proposed legislation say that it should have been implemented immediately after the beginning of the crisis to potentially stabilize the Lebanese economy, and by implementing it so late will only hurt depositors even more.

Defenders of the possible legislation, such as the Free Patriotic Movement’s (FPM) Alain Aoun, say that critics and protesters misunderstand the law and that it will not affect the future of deposits.

Ultimately, it seems that the fate of Lebanon’s depositors is in the hands of the same people who caused the crisis to begin with.

Speaker of Parliament Nabih Berri called for a parliament session on Tuesday, August 30, to discuss the potential legislation.

Delayed action: After burning for almost the entire summer and the collapse of a large section of the silos, Lebanese authorities have finally made a more concerted effort to put out the fires that have been raging in the destroyed port silos.

Though previous attempts have been made, authorities warned that overly disturbing the silos could make the fires worse.

Families of the victims of the 2020 Beirut port blast have pressured the government to do more to manage the fires and ultimately extinguish them.

Environment Minister Nasser Yassine announced a plan to remove the rubble and deal with the issue in an environmentally sound way.

Syria’s air wars: Multiple strikes were carried out in Syria over the last week, as US forces stationed east of the Euphrates clashed with Iranian-backed militias and Israel targeted a depot housing hundreds of medium-range missiles.

Allegedly in response to an Iranian drone attack on the US’s al-Tanf garrison on the Syrian-Iraqi border, the US struck positions of the Fatemiyoun Brigades, an Afghan Shiite militia, in Deir az-Zor.

US positions in eastern Syria then came under rocket fire, and US again attacked positions in Deir az-Zor with helicopters.

Iran has said it has no connection with militias in the area, but this is highly unlikely.

The strike is said to have caused some of the most destruction since Israel began its air campaign in Syria during the early days of the war.

Libya on the edge: At least 32 people have been killed in the Libyan capital of Tripoli in some of the worst fighting the capital has seen in years.

Fighting raged across the city over the weekend as forces aligned with the parliament-backed administration of Fathi Bashagha failed to take control of the capital and oust the Tripoli-based government of Abdulhamid al-Dbeibah.

Bashagha is backed by Khalifa Haftar, whose forces attempted, and failed, to storm Tripoli in a large offensive in 2019.

Though the fighting ended as quickly as it began, it has heightened worries that Libya could once again descend into a violent power struggle similar to previous rounds of fighting.

Until next time: Iraq’s firebrand Shiite cleric, Muqtada al-Sadr announced on Monday, August 29, that he would be “retiring” from politics and closing his group’s offices.

Sadr’s followers have in recent weeks been occupying and protesting at the Iraqi parliament building in an attempt to push for new elections in the country.

It seems that Sadr’s move here is just a political stunt, and he will likely return to politics rather quickly.

Al-Aqsa under threat: Israeli settlers raided the Al-Aqsa Mosque compound on Sunday, August 28, entering via the Lions’ Gate for the first time.

Sheikh Omar Kiswani, director of Al-Aqsa Mosque, described the raid as a “serious measure that violates the status quo at the holy site and the agreements signed between Israel and Jordan concerning the affairs of the Mosque.”

It should be noted that the Second Intifada was partially sparked when Ariel Sharon and a Likud party delegation guarded by hundreds of Israeli riot police entered Al-Aqsa in 2000.

Forgotten rivalries: Morocco has recalled its ambassador to Tunisia, after Tunisian President Kais Said welcomed the head of the Polisario Front, Brahim Ghali, to a Japanese development summit for Africa in Tunis.

The Polisario Front has been engaged in an armed struggle with the Moroccan military since the 1970s over the independence of Western Sahara. Morocco claims that Western Sahara (and its resource wealth) belong to Morocco, while the local population prefers independence.

Ghali was invited to the conference by the president of the Africa Commission, as a number of African states view the Polisario Front as the legitimate representative of Western Sahara.

The press under attack: Hassan Shaaban covered protests over water distribution in the south, while Dima Sadek criticized Iran, leading to both of them being attacked by Hezbollah. Dana Hourany spoke to Shaaban and Sadek to investigate the state of press freedom in Lebanon.

Trouble on all fronts: Turkey, Iran, Russia, and the US are currently battling for influence in northeast Syria, with its inhabitants fearing for their lives and for their social experiment that is the Autonomous Administration of Northeast Syria, commonly referred to as Rojava, writes Philippe Pernot.

Further isolation: The recent threats against Saudi Arabia’s embassy in Lebanon will only serve to deepen Lebanon’s isolation in the region, which in turn strengthens Hezbollah’s hand in the country. NOW released a commentary on the issue.

Mayyas’s success: Lebanese dance troupe Mayyas wowed the America’s Got Talent judges during the auditions phase, leading them a fast track to the live shows.

Founded in Beirut by Nadim Cherfan, the group will perform during the semifinals on September 6, with a campaign being created to support them.

LBCI has launched Kermalak Ya Lebnen — For You Lebanon, a campaign inside the US aimed at Lebanese and Arab expatriates who are eligible to vote for acts performing on the show.