Lebanon continues to wait for a new president, a dispute over capital controls, a possible electricity crisis, Nasrallah speaks, the investigation into Riad Salameh ramps up, two executed in Iran, UAE visit to Syria and UN prepares to vote over aid to Syria. Your weekly update from Lebanon. 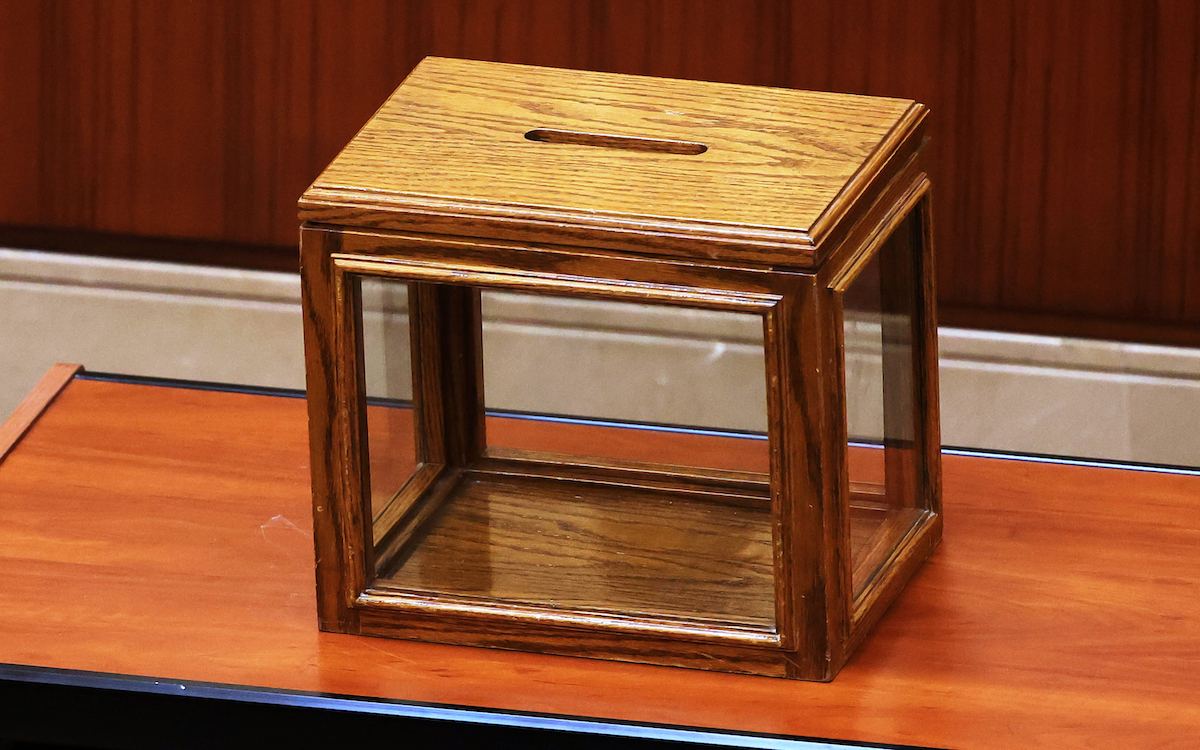 A picture shows the Presidential election ballot box at the Lebanese Parliament during the 4th session to elect a new president in Beirut on October 24, 2022. Photo: Joseph Eid, AFP

We are coming up on the halfway mark for the first month of 2023 and Lebanon continues to be without a president, almost two and a half months after Michel Aoun left office.

There is no end in sight for this political crisis, as Parliament has been on break since late last month for the holidays and new year.

Reportedly, Parliamentary Speaker Nabih Berri is getting ready to call a special parliamentary session to elect a president, but even Lebanon’s long-serving speaker does not seem optimistic about the prospects of a president being elected any time soon.

According to Al-Joumhuria, Berri believes that “the next session will not change anything” and that nothing had changed in the time since Parliament’s last electoral session.

The split in Parliament remains the same. Some of the opposition is for Michel Moawad, while the Hezbollah bloc refuses to back anyone until they can all come to a consensus on a candidate, something that has primarily been hampered by Free Patriotic Movement leader and presidential hopeful Gebran Bassil, and Hezbollah continues to wait on a candidate to give them assurances that they would not interfere in the group’s affairs.

Meanwhile, the country continues to delve further into crisis.

While Berri might argue that “Lebanon is lost without a president,” the fact of the matter is that even with a president Lebanon has been lost.

The politicians have had over three years to tackle the economic crisis, and have virtually refused to do so.

Now, according to the constitution,  their hands are tied and they are unable to do anything until a president is elected. Meanwhile, the economic crisis deepens, and people’s lives continue to worsen.

Controlling capital: For over three years now, Parliament has continuously failed at passing a capital control law that would create an official system in which the banks can operate amidst the economic crisis. Instead, they have let the banks decide for themselves as to what they would like to do.

Today, parliamentary committees are meeting to follow up on the study into the possibility of a capital control law.

There has been talk about raising the limit on monthly withdrawals to $800 for depositors, something that banks have flatly rejected, saying “if you want to be obeyed, then ask for what is possible.”

Today’s meeting will likely yield little to no results, despite what might be said, and the politicians will continue allowing the banks to dictate how capital is controlled in Lebanon.

Reportedly, there is a dispute over payments for three fuel ships off the coast of Lebanon and, without the fuel,  the electricity situation in the country is likely to worsen over the next few weeks.

This dispute is between caretaker Prime Minister Najib Mikati and the FPM with the former refusing to sign off on a loan to pay the ships as it would require extraordinary approval, something that would likely be strenuously objected by the FPM, who has argued that Mikati is making a power play with the absence of a president.

Once again, political bickering poses the likelihood of worsening the lives of the Lebanese people.

Nasrallah’s speech touched on much of the same subjects that many of his speeches have addressed in the past, namely Israel’s transgressions and how Hezbollah is supposedly standing up to them and poses a major threat to Lebanon’s southern neighbor.

However, this time, the Hezbollah leader also addressed the public rift between the FPM and the Party of God for the first time.

In essence, Nasrallah told Bassil that if he is no longer happy with their alliance, then he is free to leave at any point.

This is something that both Hezbollah and the FPM know is not possible as, in doing so, the FPM would be sidelined. Bassil needs the alliance and Hezbollah’s support if he wants to stand a chance at ever becoming president.

Salameh in the crosshairs: An European delegation is scheduled to visit Lebanon this month as part of an ongoing investigation by several European Union nations into Lebanon’s Central Bank governor, Riad Salameh.

This will be the first that a joint visit has taken place in Lebanon.

While Salameh’s name is on the list of those to be interrogated, Lebanese State Prosecutor Ghassan Oueidat has said that he will not be questioned in the first round of interrogations but that French Judge Aude Borozzi has requested to speak with Salameh directly.

Even if the request was granted, the chances of Salameh actually complying are slim.

Six EU countries are investigating Salameh for embezzling over $330 million from the Central Bank, among other financial-related crimes.

The Lebanese judiciary is also investigating the Central Bank head, but the investigation remains stalled.

More executions in Iran: The Iranian government executed two more men on Saturday for the alleged murder of a Basij member during the ongoing nationwide protests in what is widely believed to be a fear tactic to dissuade protests.

This put the number of protest-related executions at four with another nine people facing the possibility of meeting the same fate.

Human rights groups have denounced the trials as being a far cry from real justice and that they are merely show trials.

The New York Times compiled a list of those who are at risk of being executed as well as those who have already been killed. You can read it here.

Pouring gasoline on fire: The region is tense, with apprehensions about Israel’s newly formed far-right government, headed by Benjamin Netanyahu and fears that it will start a new conflict.

Well, some of those fears were realized on Tuesday when Itamar Ben Gvir, the national security minister, decided to visit the al-Aqsa Mosque with a large security detail that cleared out the area during his controversial trip, sparking outrage within the region.

Jordan’s king called the site a “red line,” and even caused some of Israel’s closest allies, particularly the US, to condemn the notorious new minister’s actions as provocative.

Many analysts have said that it is unlikely that the new government will actually spark conflict, with one specific caveat: if the government tries to change the status quo of Jerusalem and its holy sites, whose custodianship currently belongs to Jordan – something that Ben Gvir is staunchly in favor of.

Assad makes gains: Syrian President Bashar al-Assad continues to see warming relations within the region, after only a little over a decade in the cold since his government began brutally cracking down on protesters and plunged his country into civil war.

On Wednesday, the United Arab Emirates’s foreign minister, Sheikh Abdullah bin Zayed al-Nahyan, visited Damascus as the UAE and Syria begin to normalize relations after breaking ties in the wake of the civil war.

In addition to this, there is talk that Assad could meet with Turkish President Recep Tayyip Erdogan as Turkey seeks a buffer zone on its southern border with Syria, mainly seeking to remove Kurds from the area.

Assad is still a long way away from full normalization globally, but it is increasingly looking like more and more countries are willing to look past the atrocities committed by the government over the past ten years in favor of forging economic ties.

A question over aid: The United Nations Security Council will vote today on whether or not to continue allowing aid into rebel-held territory in Syria.

Russia is expected to abstain from the vote, but the close Assad ally increasingly expressed opposition to the aid convoys.

Last year, Russia prevented an initial plan from going through until it was reworked to require approval after six months.

Without the aid, the situation in the rebel-controlled territory would likely become even more dire than it already is.

Football returns to Basra: For the first time in more than four decades, Iraq is hosting the Gulf Cup.

For decades, Iraq has been effectively banned from hosting any football tournaments due to conflict and unrest.

The tournament will serve as a morale boost for many Iraqis, particularly in Basra where the two-week tournament is being held, who are facing economic issues amid political instability.

Should the tournament go well, it would present an opportunity for the country to return to the fold and potentially become a regional host for sporting events.

Brazil’s January 6: On Sunday, January 8, Brazil saw its own version of the January 6, 2021 insurrection that took place at the Capitol in Washington DC.

Hundreds have been arrested so far with the country’s new president Luis Inácio Lula da Silva promising punishment for those involved.

It is unclear what role, if any, Bolsonaro played in the storming of Brazil’s political establishments.

Memory: The August 4 Beirut Port explosion was a monumental moment in Lebanon’s history and, after more than two years, there is still no justice for the victims. NOW’s Dana Hourany took a look at Beirut 607, a platform meant to keep the memories of the victims of the Beirut Blast alive.

New rate, same problems: Lebanon is set to raise the official exchange rate of the lira to the dollar at the start of next month. But I found that this is an ultimately futile act that will do nothing to combat the economic crisis except worsen it.

Podcasts: After a bit of a break, Sarde after dinner returned with Médéa Azouri and Mouin Jaber taking the podcast from the Mediterranean to the Euphrates as the two sat down with Iraqi journalist and comedian Ahmad al-Basheer to discuss the revolutions in Lebanon and Iraq, al-Basheer’s experience after the US occupation of Iraq and the triangle of influence between Iran, Iraq and Lebanon.