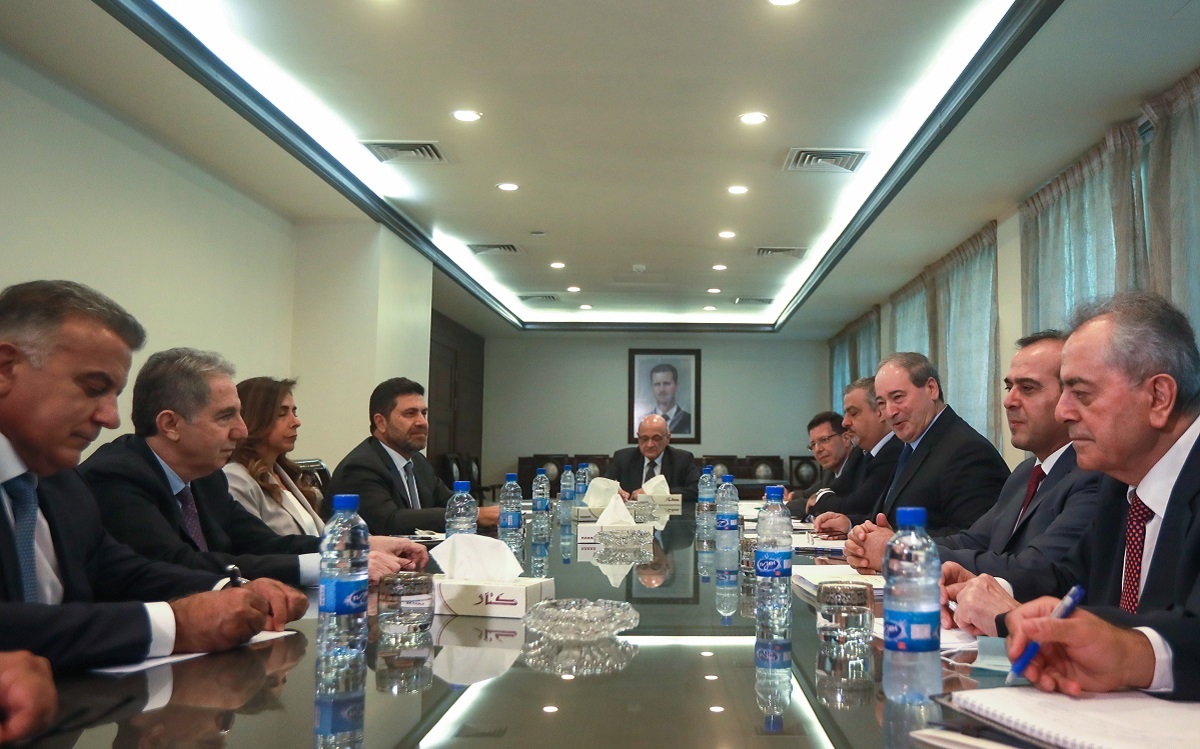 Syrian Foreign Minister Faisal Miqdad (R C) and other cabinet members meet with an official Lebanese delegation including (L - front to back ) the General Security apparatus's chief, Abbas Ibrahim, Ministers of Finance Ghazi Wazni, of Foreign Affairs Zeina Akar, and of Energy and Water Raymond Ghajar, as well as the Secretary-General of the Syrian-Lebanese Higher Council, Nasri Khoury (C) in the capital Damascus on September 4, 2021. Photo: Louai Beshara, AFP

The world as we know it is coming to an end. Not only in Lebanon but everywhere else.

The US withdrawal from Afghanistan has given hope to groups and regimes that have long been the outcasts of the liberal world. The Taliban have claimed victory over the opposition forces and are about to announce a government. Some Western powers, including the European Union, are not sure what to do about it, so they plan to “engage it, without recognizing it”.

Far-right groups everywhere rejoice over America’s failure, jihadists are attacking Chinese workers in Balochistan, as China seems to be the new imperialist force in the region.

Meanwhile, in the Middle East, the US disengagement has left huge question marks over the fate of other conflicts where Washington played a key political role. One of those places is Syria.

Damascus seems to have become confident and assertive once again, at least for Lebanon’s future. It is again up to Syria to allow or not Lebanon to go dark and implode.

With the US willing to make exceptions from the Caesar act to provide Lebanon with electricity from Jordan and natural gas from Egypt, Damascus has the upper hand again. And it would be strange if the Syrian government did not use the whole situation to its advantage.

Hello. This is your opinionated weekly roundup from Lebanon. We don’t want to just give you the news, but also the talk of the town (the submerged bits of the iceberg), which is essential in a place where everything is done behind closed doors.

The agreement: Syria has agreed on Saturday to help address some of Lebanon’s many crises by letting gas and electricity transit through its territory.

The Syrian government was apparently totally taken by surprise by the visit and did not have time to prepare the necessary protocol for the visit of foreign dignitaries, and so, the Lebanese flag did not appear in the official pictures. It may have been out of stock in Damascus, after all the country is at war and also facing a dire economic crisis. The symbolic lack of the Lebanese flag left some wary of Syria’s intentions.

But, details aside, most people are optimistic that they may finally get less power cuts.

“The parties agreed to set up a joint team to track technical details” of the plan, said Nasri Khouri, secretary-general of the Lebanese-Syrian Higher Council.

For those who were not around or do not remember what this council does: it was set up in 1991 to oversee bilateral matters, including discussing a proper border treaty between Lebanon and Syria. After 2008, when Lebanon and Syria established diplomatic missions, its role was heavily contested, but the SLHC remained in place, not making any progress at all on pretty much anything.

Lebanon’s energy minister, Raymond Ghajar, said a meeting would be held this Wednesday in Jordan with representatives from Beirut, Amman, Damascus and Cairo to discuss technical and financial issues and to decide on a work plan and timetable.

The first catch: Work will be needed to get Syria’s war-ravaged infrastructure up to the task of moving energy.

Lebanon’s presidency has previously spoken of US-led talks with the World Bank to finance energy imports, but it’s unclear where the money for upgrading the grid would come from.

Honestly, energy was Matt Nash’s turf when the “old NOW” was around and I’ve been learning my way around in the past year or so.

So I called Middle East Institute’s Jessica Obeid to enlighten me the other day. She told me this deal would hardly be enough to cover Lebanon’s energy needs. Moreover, the most obvious way out of the whole debacle would be to upgrade the equipment in the power plants to burn natural gas instead of Diesel which makes the energy production extremely expensive, and build not more than a couple of more power plants. What’s left could be made up for by using renewable energy.

This is hardly rocket science and the solutions have been on the table for quite a long time. If only there was any political will. However, private interests, corruption and incompetence have led to prolonging temporary measures and subsidies to cover the high cost of the energy produces until the infrastructure decayed and backout has become imminent. Basically, what experts like Obeid say, it’s about 11.59 for Lebanon’s energy system and the clock is ticking.

The second catch: It turns out that the two tankers Hezbollah leader Hassan Nasrallah announced last month that left Iran and were heading to Lebanon to help with the fuel crisis are actually heading to Syria. They contain crude oil that needs to be refined, and Lebanon – surprise – doesn’t have the infrastructure to refine it.

We have just presented clients data showing that the two Iranian-flagged tankers which traversed the Suez Canal recently (DARAN and GOLROO) are heading to Syria and NOT Lebanon. They are carrying crude oil.

The third catch: Iran’s foreign ministry said Monday that Tehran will continue to send fuel to Lebanon if “personalities, merchants or the government” in Lebanon wish “to purchase” more fuel.

Nothing is lost, nothing is created, everything is transformed: Tehran has long been at odds with the Taliban, obviously because of the latter’s massacres of the Shiite Hazara. However, Iran has seen a new opportunity in the US withdrawal and is now more assertive in the Middle East. Nicholas Frakes looked at the strange circumstances in depth.

The tunnels of Bekaa: The debate was intense on social media, more than it has been  on tv screens and in the mainstream newspapers. The Lebanese twittersphere has been embroiled in furiously discussing how the Iranian fuel could reach Lebanon, IF it ever reaches Lebanon: smuggled in trucks though the usual smuggling routes used for decades by Diesel traffickers in East Bekaa Valley, or even through makeshift pipelines.

So, Syria is back: That is how our columnist Ronnie Chatah often puts it. He sees Lebanon’s reality as flipped, in disarray. Nothing is as is should be, and the past is catching up with us.

Much like it happened in the past, Lebanese authorities were set to deport on Monday six Syrian men arrested near their country’s embassy last week, which might put them at risk of death and torture, their lawyer and a global rights group said.

Five of the arrested men were former rebel fighters from the southern Daraa province. They may face retaliation from regime forces should they be deported, lawyer Mohammed Sablouh told The National’s Aya Iksnadarani.

When the gas station doesn’t come to the mosque:  A Sunni Muslim cleric guided the Friday prayers held in a petrol station south of the Lebanese capital Beirut on September 3, 2021.

A really tough choice: To leave or not to leave, is the choice many young Lebanese are trying to make right now.

Some choose to stay. Like our own Dana Hourany, who expressed in an essay how hard it is to see friends go but to feel that her fight is here, now.

Others, like Lina Mounzer, who is only leaving temporarily, see things from both sides. She wrote two op-eds about what living in Lebanon has become, and another on what you leave behind when you leave.

Leaving is hard: Lebanese seeking jobs overseas too often become a cheap labor source, as employers take advantage of the devastating economic crisis in the country to offer low pay. Sally Abou al Joud spoke to job seekers and HR experts on what is happening on the labor market.

Keeping one foot in: Some families Others spend their time apart, one working abroad and the other still in the country. A situation that is taking its toll especially on the children who scarcely see one of the parents, either because they work abroad to support the family or have to come back to Lebanon to take care of the family’s elderly.

Many Lebanese are leaving temporarily to take their children out of the country where the school year may be sacrificed not necessarily because of the COVID-19 pandemic, but because of the lack of fuel to power private generators. They may come back when things get better, they say.

Back to school:  It’s not what it used to be. Some schools have closed their doors, some indefinitely, because they don’t have mazout for generators and because teachers simply left the country to work for better salaries in the Gulf. Dana Hourany looked into it.

Higher education at stake: Lebanon’s private universities have for decades been the region’s liberal education hubs. But the economic crisis and the devaluation of the Lebanese pound which has made fees unaffordable for students and salaries unbearable for professors threatens the quality of learning. The newest member of our team, Sally Abou al Joud spoke to professors and students about what they struggle with.

Lebanon+: In Lebanon, you’re on social media, therefore you exist. That is where the country is made and unmade, where experts and trolls alike debate heavy political matters.

Some are more sensitive. Like President Michel Aoun’s communication advisors, who don’t seem to make the difference between the president’s personal account, where they can block criticism as they like, and the Presidency’s Twitter account where they are supposed to take the criticism and turn it into governance lessons. Several people on Twitter last week complained that they have been blocked from seeing the presidency account, which normally posts press releases from Aoun’s daily meetings. But given the economic crisis as well as the fact that the president has been stalling the government formation because he requests a blocking third in the cabinet, he gets, indeed, quite a lot of criticism.

What to listen to:

Also, if you want to know more about who the new kids on the bloc are ahead of next year’s May elections and what the obstacles they face are, read Nicholas Frakes’ piece.

Sarde after Dinner hasn’t returned yet. However, if you read French, you can take a look at Medea Azouri’s piece on why the Lebanese leave the country and on the eternal Lebanese exile published in L’Orient Le Jour.

Luna Safwan, who recently relocated to Istanbul, announced that Beyond Politics would soon be back.

Until next week, stay safe of the Delta variant and… I don’t know, hang in there.