Of Lebanon still not having a president, Hezbollah’s demands from the next president, US aid to Lebanon, Israel and Lebanon cooperating on climate change, the ongoing economic crisis continues to worsen, plane “shot” landing at Beirut airport, Lebanese army trains to prevent bank heists, cholera update, bombing in Istanbul, Iran protester sentenced to death, UN vote on Israeli occupation of Palestine and a US citizen killed in Iraq. Your weekly update from Lebanon. 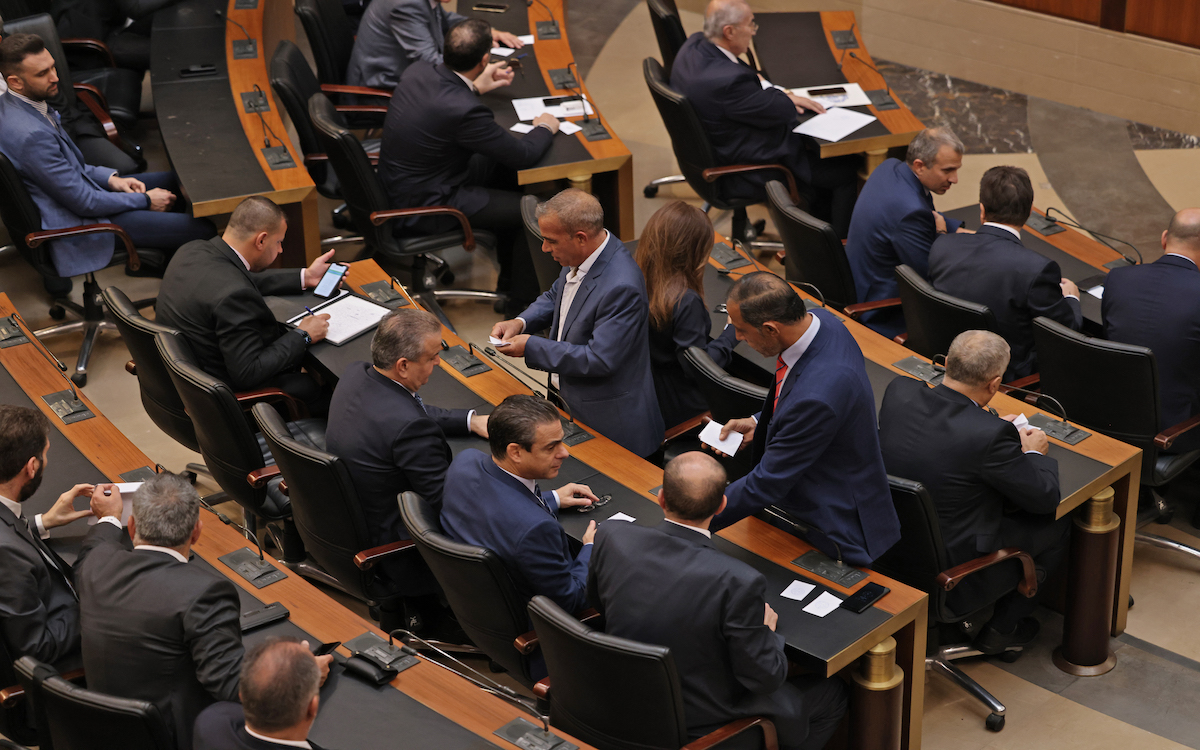 Clerks give voting ballots to members of the Lebanese Parliament during the 4th session to elect a new President in Beirut on October 24, 2022. Photo: Joseph Eid, AFP

Another week has gone by and Lebanon still has no president.

It has been two weeks since Michel Aoun left his office in Baabda, leaving a power vacuum in a country that often takes prolonged periods of time to fill such vacuums.

So far, Lebanon’s Parliament has held five sessions to try and elect a new president, and each time the country’s politicians have been nowhere close to reaching the two-thirds majority required for a candidate to be elected to Lebanon’s highest political office.

#Lebanon’s Parliament has, unsurprisingly, failed to elect a new president for a fifth time. Lebanon has been without a president for 10 days. No new date has been scheduled for the next session. #لبنان

There is currently another electoral session scheduled for November 17, but why even bother?

There seems to be little interest in coming to a consensus on a candidate. Parliament is simply wasting everyone’s time by holding a session where the result will be the same as the previous five.

Conditional support: The Iran-backed Shiite party Hezbollah has not officially thrown its support behind any specific candidate in the presidential election, but it is widely believed that Frangieh is their preferred pick.

In a recent speech, marking the group’s Martyrs Day, Hezbollah Secretary-General Hassan Nasrallah explained the group’s conditions for whoever the next president might be.

Nasrallah said that the president should be a politician who will not “betray” Hezbollah, specifically when it comes to its armed faction.

With Hezbollah and its ally the Amal Movement, headed by Parliamentary Speaker Nabih Berri, holding all of the Shiite seats in Parliament, it is impossible for a president to be elected without Hezbollah’s support.

US to the rescue: During a stopover in Lebanon before continuing to Egypt for COP27, USAID chief Samatha Power announced that the United States would be providing the struggling Mediterranean country with $80.5 million in aid for food assistance and solar-powered water pumping stations.

Power did not say whether or not this aid would be contingent on the election of a president, the formation of a government or the passing of economic reforms, similar to the demands set by the International Monetary Fund that would give Lebanon access to billions of dollars in aid.

The majority of the aid announced by Power, $72 million to be exact, would go towards helping give 650,000 people access to food for five months. The remaining funding is dedicated to funding 22 solar-powered pumping stations.

Lebanon has a population of around six to seven million, with an estimated 80 percent forced into poverty due to the ongoing economic crisis.

Best enemies: Lebanon and Israel will be indirectly cooperating with each other to combat the growing threat of climate change in the region.

During a forum of eastern Mediterranean and Middle Eastern countries, the member countries said, in a statement, that they would work to “strengthen regional cooperation” and “act in a coordinated way” in order to combat climate change.

A photo of Mikati sitting across from Israeli Environmental Protection Minister Tamar Zandberg went viral in Israeli media, with Mikati’s office saying that it was overblown.

Lebanon and Israel are still technically at war. Although they have recently signed a maritime border agreement, Lebanon has insisted that this does not constitute normalizing relations.

A Lebanese welcome: A Middle East Airlines flight landing in Beirut on Thursday, November 10 was struck by stray bullets, causing material damage to the aircraft and injuring no passengers.

Lebanese MP Paula Yacoubian was on the flight and shared photos of the damage.

Shooting in the air is extremely common in Lebanon, often during weddings, funerals, birthdays, the end of exams for children, children doing well in their exams, children getting accepted to university, as a show of support for political leaders, as well as for many other occasions.

The crisis continues: The Lebanese Lira once more surpassed 40,000 to $1 on November 8, despite the Central Bank selling dollars in an effort to bring the rate down.

#Lebanon’s lira has devalued, once again, to 40,000 to $1. As long as there is a political vacuum in the country, it is likely to continue to worsen at a more rapid pace. #لبنان

With the power vacuum in the country, there is little that can be done to effectively combat the economic crisis.

Fuel prices in #Lebanon have surpassed 800,000 lira for 20 liters of gasoline. #لبنان

The price of fuel and the value of the lira continues to fluctuate, but remain close to their recent highs.

#Lebanon’s army carried out an exercise in #Jounieh on what to do in the event that there is a bank hold up, something that has become a common occurrence in the country as desperate depositors try and gain access to their trapped savings. #لبنان https://t.co/klrkNvs95W

Since the summer, numerous banks have been held up by depositors demanding access to their trapped savings.

In response, banks have gone on two indefinite strikes, calling on the security forces to better protect them.

Cholera update:  Despite the arrival of vaccines to the country, Lebanon is continuing to see cholera spread throughout the country.

There are currently 536 confirmed cases with another 2,833 suspected cases and 18 deaths.

For more on the outbreak, check out my colleague Philippe Pernot’s recent piece here. You can also read my coverage of the outbreak here.

Bombing in Istanbul: The Turkish city of Istanbul was rocked by a bombing on Sunday in the crowded Istiklal Street, killing at least six and injuring over 80 others.

This was the first bombing that the city has seen since 2016, which also targeted the Taksim area.

On Monday, Turkish Interior Minister Suleyman Soylu announced that the country’s security forces had arrested the person who had allegedly placed the bomb. Turkish authorities said that it was a Syrian woman who was trained by armed Kurdish forces.

Ahlam Albasir (23) who is revealed as the bomber of the istanbul attack that killed 6 people.
Turkish police revealed her picture informing that she has been captured 02:50 last night in Buyukcekmece. pic.twitter.com/64NsmRZY1Q

The PKK, a militant Kurdish group that has been in armed conflict with the Turkish state for decades, denied any involvement in the bombing.

To the gallows: An Iranian protestor has been sentenced the death, the first official death ruling by Iran’s judiciary since the nationwide protests began nearly eight weeks ago.

Five others were given jail sentences.

Hundreds of people arrested by Iranian authorities since the start of the protests face charges, some of which carry the death sentence.

Netanyahu was Israel’s longest-serving prime minister until he was ousted last year after failing to form a coalition following the country’s fourth elections.

Now, Netanyahu is set to lead the most far-right government in Israel’s history, which could have far-reaching consequences.

For more on the rise of the new far-right government, check out my recent reporting here.

The case for release: A Palestinian man’s family is lobbying for their son’s release from an Israeli prison on the grounds that his mental health is at risk.

Ahmad Manasra was arrested at the age of 13 after he and his 15-year-old cousin, Hassan, went through an Israeli settlement in Jerusalem armed with knives. Hassan stabbed a 13-year-old Israeli boy exiting a candy store and attacked another Israeli man, and was shot and killed by Israeli security forces. Although Ahmad did not attack anyone, he was hit by a car, beaten and jeered by Israelis passing by.

Manasra is now 20 and has spent most of his six years in prison in isolation, with doctors saying that he had developed schizophrenia as a result of his solitary confinement.

Despite repeated calls for his release, Israeli courts have largely rejected the appeals because he was convicted on terrorism charges.

Israel’s supreme court is set to decide whether or not to hear his case.

Illegal occupation: The UN General Assembly’s Special Political and Decolonization committee approved a draft resolution that calls upon the International Criminal Court to quickly issue its opinion on Israel’s occupation of Palestinian territory.

Israel vehemently objected to the resolution, ironically arguing that it would destroy any chances of Israel reconciling with the Palestinians.

American killed in Baghdad: US citizen Stephen Troell was gunned down in central Baghdad in a rare targeting of a foreigner in the Iraqi capital.

Troell lived in the city with his wife and four children who all worked at the Global English Insitute.

Iraqi authorities say that he was targeted by unknown gunmen and that the gun used to kill Troell was fitted with a suppressor.

There is an ongoing investigation into the murder.

Aoun and press freedom: Lebanon was never an example when it comes to press freedom. However, NOW’s Dana Hourany found that there was a significant crackdown on freedom of speech during Aoun’s six years as President of Lebanon.

An environmental disaster: When Lebanon signed a maritime border agreement with Israel, Lebanese politicians claimed that the potential natural gas in the Qana Prospect would help save the country. NOW’s Philippe Pernot looked at the environmental consequences of such an endeavor.

A dark omen: The Middle East has been hit incredibly hard by the effects of climate change. The New York Times’s Karen Zraick wrote about how Jordan is running out of water and how it could be a sign of what is to come for the region.

(In)justice: Iran’s judicial system has long been criticized as being corrupt and simply doing what the government tells it to. The Washington Post’s Miriam Berger looked at how the protesters who took part in the ongoing nationwide demonstrations are now going to face the judiciary’s wrath.

Joyride: Michel Aoun has been out of office for two weeks now and, recently, he was in Batroun with his son-in-law and potential successor Gebran Bassil.

While in Batroun, the two drove around the city’s harbor in a golf cart.

When you’re returning back from the party at 5 am, and the uber driver starts sharing his life story:pic.twitter.com/xxOvBnznbe

Podcasts: Law in Lebanon is more of a nice idea than something set in stone. Attorney Diana Assaf sat down with Médéan and Mouin in the latest episode of Sarde after dinner to discuss developments surrounding the August 4 Beirut Port explosion investigation, the political vacuum in Lebanon and issues surrounding the Lebanese judiciary.

If you are a film fan, then the newest episode of the Beirut Banyan is for you. Ronnie Chatah spoke with film critic Anis Tabet. The two discussed cinema, contrast classic films with modern-day series, the long-term impact of the coronavirus pandemic on cinema and where the Lebanese film industry currently stands.