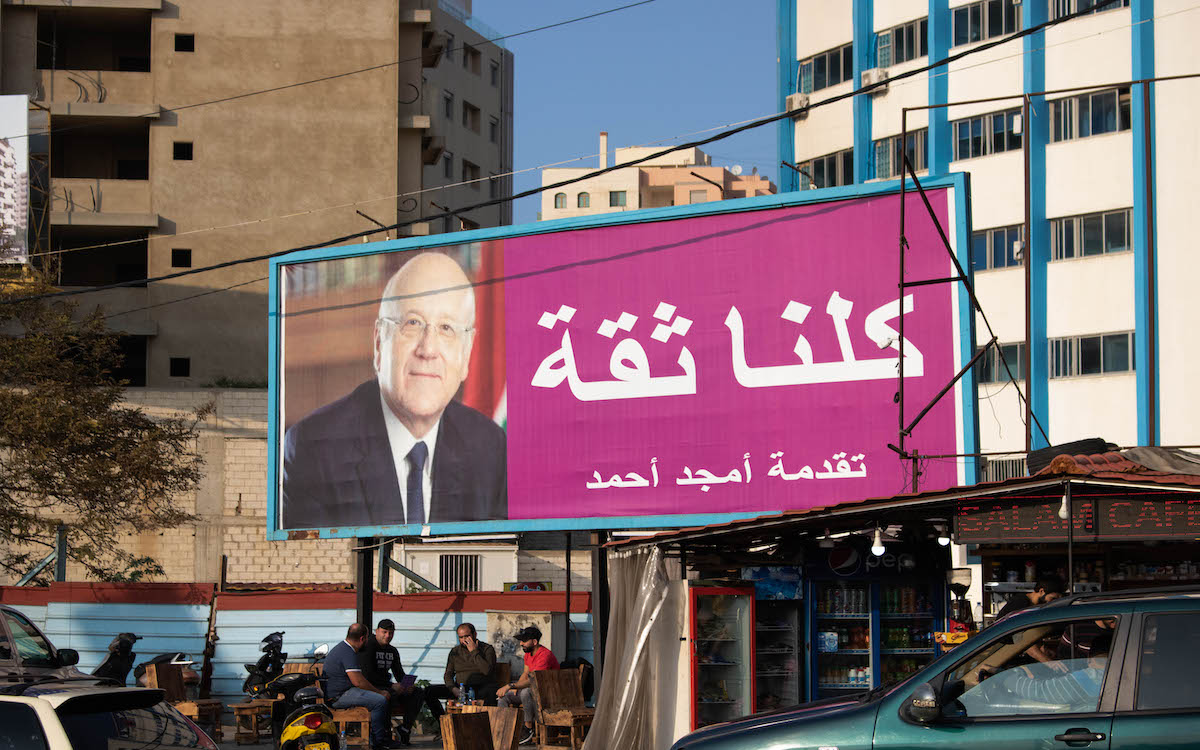 When caretaker Prime Minister Najib Mikati announced that he would hold the first cabinet meeting in six months on Monday, December 5, it raised a few eyebrows.

What was the point of the meeting? Can he legally do such a thing? Is this a power move?

One thing was obvious, though. This planned meeting only added to the political chaos that Lebanon is seeing.

Very quickly after the meeting was announced, several members of the government said that they would be boycotting it, arguing that it was contrary to Lebanese law.

It is worth noting that most of the ministers saying that they will boycott the cabinet session are affiliated with the Free Patriotic Movement, the Maronite Christian party headed by Gebran Bassil, the son-in-law of the former president and party founder Michel Aoun.

Still, even with several members of his cabinet claiming that they will not attend the meeting, Mikati refused to back down. He planned on holding the meeting as he continued to have the support of the rest of the cabinet, most importantly that of Hezbollah and the Amal Movement, which expressed the need to hold such a meeting.

Without the backing of the two Shiite parties, the cabinet would not be able to meet, a tactic employed for three months as a means of trying to end the investigation into the August 4 Beirut Port explosion.

Mikati argued that the session was important so that the government could ensure that important services, such as medical treatments, are able to continue.

“We will only approve the matters that are deemed important and urgent by ministers,” Mikati stated. “It disappoints me when some people consider the meeting a sectarian move or an attempt that targets a specific group. Do we discriminate when we provide assistance? What is being said is unacceptable. There’s a file related to cancer and dialysis patients that should be approved.”

This has not stopped some from arguing that Mikati is making a power play, seizing on the political vacuum to, at least for the time being, give himself and his government more power.

This is a sentiment echoed by the recently retired Aoun.

Though the Consitution does not say anything about the government not being able to meet when it is in a caretaker capacity, it is clear that they have limited authority even when there is a president.

So, as long as Mikati and his government do not cross any lines, they are legally not in the wrong.

That being said, this is all more political bickering for the sake of riling up each side’s political base. It accomplishes nothing except to create more disunity and ensure that less gets done.

Yup, still no president: We have now reached eight failed attempts to elect a president, with still no indication that this will change anytime soon.

No one in Lebanon is really surprised that it has been over a month since the first electoral session and the country still has no president. It almost always takes the country’s politicians months, if ever, to get anything done.

Parliament is set to meet again on, you guessed it, Thursday to hold the ninth session to try and elect a president.

The results are expected to be roughly the same as they have been the last eight times.

The sanctions target Adel Mohamad Mansour, the executive director of Hezbollah’s al-Qard al-Hassan group, as well as al-Khobara for Accounting, Auditing and Studies which Mansour is also affiliated with.

Al-Qard al-Hassan has been previously sanctioned by the US.

The firm Auditors for Accounting and Auditing and one of the firm’s representatives, Naser Hasan Neser, were also sanctioned. Hassan Khalil, who Treasury accuses of helping Hezbollah acquire arms, also received his own sanctions.

“Supporting” Syrian refugees: The UNHCR chief, Filippo Grandi, visited Lebanon last week where he met with Mikati to discuss how to best support vulnerable Lebanese and refugees in the country.

Meanwhile, the Lebanese government is pressing on with a plan to repatriate Syrian refugees back to their home country.

Many human rights organizations have criticized the government’s efforts to send Syrian refugees back, arguing that Syria remains unsafe for them.

NOW’s Philippe Pernot looked at how despite this meeting, the government is still poised to continue its “voluntary” deportation of Syrians.

A worsening economic situation: Despite the Central Bank’s best efforts to keep the lira rate down, the economic crisis has continued to worsen, the political vacuum only adding to the worsening situation.

Cholera update: The spread of cholera in Lebanon has continued to slow, with no new confirmed cases or deaths in the last 24 hours.

There are currently 652 confirmed cases, 4,123 suspected cases and 20 deaths.

What happened with Iran’s morality police?: On Sunday, Iran’s attorney general, Mohammad Jafar Montazeri, hinted during a press conference that the country’s Guidance Patrol had been abolished. However, since then, it has been increasingly unclear what the governmental body’s fate will actually be.

The abolition of the Guidance Patrol has been one of the demands of protesters in Iran since the nationwide protests began in September following the death of Zhina “Masha” Amini after she was detained and died in their custody.

It is not clear, though, if the group had actually been abolished, with Iranian officials and news organizations walking back Montazeri’s statement.

Even if the Guidance Patrol were to be abolished, the mandatory hijab law is likely to remain in place and be enforced in other ways. It would also do little to end the uprising, which has progressed from demanding justice for Amini to calling for a change to the entire system.

Death of an unknown leader: The self-proclaimed Islamic State announced the death of its leader Abu al-Hassan al-Hashemi al-Quraishi, who they said died in battle.

Unbeknownst to anyone outside of ISIS, though, the group’s leader had actually been killed back in October by Syrian government and local forces in southern Syria.

The forces who killed the ISIS leader had no idea that he was the leader of the terrorist organization, instead believing him to be someone else.

The group has since named a new leader, Abu al-Hussein al-Husseini al-Quraishi, but just like his predecessor, little is actually known about him.

The protest, held outside of the Suwayda governorate building, saw demonstrators calling for regime change amid a worsening economic situation before the protesters broke into the building.

Security forces then fired live ammunition at the protesters.

Caught on camera: The killing of a Palestinian man by an Israeli soldier has sparked outrage as videos of the incident show the soldier shooting the unarmed Palestinian man at close range.

Israeli authorities say that the man, identified as Ammar Adili, was shot in self-defense as Adili had a knife and had previously tried to kill two Israelis in a car.

This claim has been disputed, though, with second-hand witnesses saying that Adili had gotten in a dispute with a motorist after a car accident and that the soldier had no reason to shoot him since the soldier had already overpowered him.

In addition to this, when medics arrived to tend to Adili, security forces prevented them from reaching him.

Renewed executions: Saudi Arabia executed 20 men who had been convicted on drug charges, ending a two-year moratorium on such executions.

While Saudi Crown Prince Mohammed bin Salman has made promises to reform the country, his vow to curtail the death penalty has increasingly faded from view.

In 2018, MBS, as he is more commonly known, told Time magazine that there were certain crimes that could be changed from a death sentence to life in prison.

Even though MBS has made moves to be viewed as a modern reformer, he has also taken increased steps to crack down on critics, putting many of them in prison.

Controversial Team Melli out of World Cup: Iran’s national football team was eliminated from the World Cup after it lost 1-0 against the United States in a deeply politicized match.

Team Melli, as the Iranian team is known, had been under immense pressure by both the Iranian government and protesters as they competed in the global football tournament, with the government expecting them to be loyal to the regime while protesters looked for them to make a statement and support their movement.

Reportedly, Iranians cheered when the national team was eliminated, viewing the team as being close to the government.

The budget: Lebanon’s 2022 budget has gone into effect with only around a month left in the year. NOW’s Dana Hourany wrote about how this budget only adds fuel to the fire, worsening situation in the country.

Lebanese oil: Lebanon is known for a lot of things. Its beautiful beaches. The ski slopes. But one aspect that is often overlooked is its olive oil production. Robert McKelvey looked at the challenges that these oil producers are facing amid the economic crisis.

Coffee and football: Lebanon definitely has World Cup fever with cafés being packed to the brim with fans looking to watch the matches. I spoke with café and restaurant owners in Tripoli about what it has been like being open during the World Cup.

Silencing dissent: Targeted killing and intimidating critics abroad are nothing new for the Iranian regime. But, as the Washington Post’s Shane Harris, Souad Mekhennet and Yeganeh Torbati found, these have been on the rise.

Podcasts: Finally, Ronnie Chatah sat down with the renowned television host and journalist Zaven Kouyoumdjian on the Beirut Banyan to discuss his more than two decades working in media, his new book and his shift from traditional to alternative news outlets.