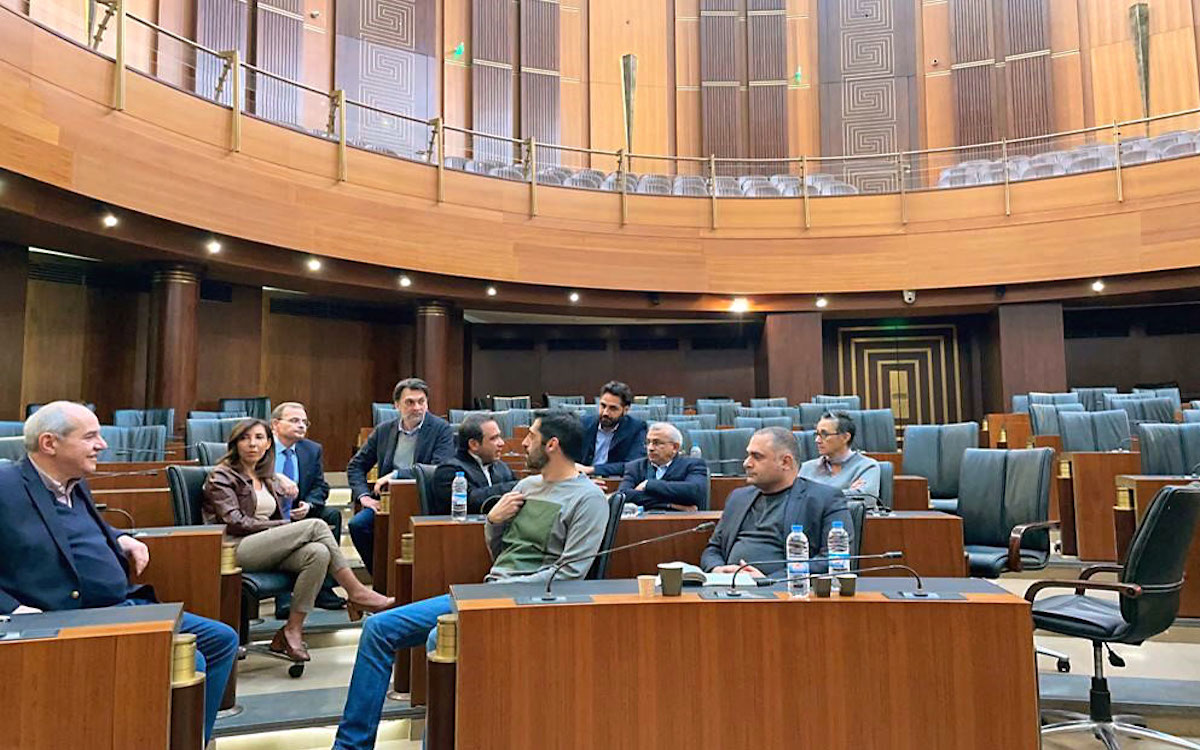 A handout picture released by Lebanese MP Firas Hamdan on January 20, 2023 shows a group of Lebenese lawmakers sitting at the parliament in Beirut. Two independent Lebanese lawmakers have spent the night in parliament to press for the election of a new president, as factional deadlock leaves the country largely leaderless amid a deepening economic crisis. Several other independent lawmakers visited the pair in the evening, while journalists were not authorized to enter the building. Lebanon has been without a head of state since Michel Aoun left office at the end of October, while the government is operating in a caretaker capacity. Photo: Lebanese MP Firas Hamdan, AFP

Last night, an unknown person threw an explosive at the building belonging to the Lebanese broadcaster LBCI.

Thankfully, according to the broadcaster, no one was injured and the explosion only caused material damage.

The intelligence division of Lebanon’s security forces is investigating the incident.

While the exact motives of the individual who threw the bomb remain unknown, the broader message is clear. This was an attack on the press.

In response, politicians condemned the attack on LBCI and expressed their support for a free press in Lebanon.

Caretaker Prime Minister Najib Mikati said that freedom of the press will be safeguarded.

“What happened is a suspicious, rejected, condemned, and denounced act, and freedom of the media will remain preserved, and I will follow up the matter with the security services that have launched the necessary investigations so that the perpetrator is prosecuted as quickly as possible,” Ziyad al-Makari, the caretaker information minister, stated.

This was not the first time that the press have become targets in Lebanon.

Samir Kassir and Gebran Tueni, both of whom were journalists and activists, were assassinated.

Many journalists who are critical of Hezbollah have received threats.

Journalism is an integral part of any democracy and attempts to shutter it should be taken seriously.

It holds people to account and helps to ensure a well-informed public, and needs to be protected at all costs.

It has been said countless times before but needs to be said once more: journalism is not a crime and will never be silenced.

The investigation continues: Judge Tarek Bitar, who has been heading an investigation into the August 4 Beirut Port explosion, has resumed his work after over a year of being blocked by a judicial order.

There is still no word if he plans on going ahead with charges against former ministers Ali Hassan Khalil, Ghazi Zeaiter and Yousef Fenianous who have held up Bitar in legal limbo as they kept filing lawsuits against him.

Hezbollah has vocally opposed Bitar and his investigation and has worked to try and have him removed, something that culminated in the Tayouneh clashes in October 2021.

The Free Patriotic Movement continued to protest the meeting and the ministers, again and refused to attend the meeting.

Despite the FPM’s boycotting, the government agreed to open a $116 million credit line in order to pay for the fuel on two ships off the coast of Lebanon so that the state electricity company can maintain the provision of the few hours of electricity that it does now.

The government is planning on holding further meetings as Parliament’s attempts at electing a president continue.

Still no president: For the first time of 2023 and the 11th time total, Parliament has failed at electing a new president.

As per usual, the majority of the ballots cast were either in favor of Michel Moawad or blank.

No one candidate has received any further support and the legislative body remains deadlocked nearly three months after Michel Aoun left office.

In response to the deadlock, several “change” MPs declared that they would be holding a sit-in in Parliament until a new president was elected.

Sleepover: “Change” MPs Najat Aoun Saliba and Melhem Khalaf announced that they would be staging a sit-in in Parliament following the 11th failed attempt at electing a president, and that they would remain there until MPs finally agreed on a candidate.

The response to the sit-in has been mixed.

Some have expressed support for the MPs for trying to force Parliament to act instead of just going through the motions every week until a solution is found while others have labeled it as a pointless stunt.

The MPs are nearly a week into their sit-in and remain in Parliament.

A potential compromise: Every attempt at electing a president in parliament since the voting began in September 2022 has yielded the same result.

However, after Hezbollah met with Progressive Socialist Party leader Walid Joumblatt on Friday, there could be a breakthrough, even ever so slightly, in the race to elect Lebanon’s next president.

Hezbollah did not accept or reject Joumblatt’s proposals, but, rather, said that the two largest Christian parties, the FPM and Lebanese Forces, needed to be included in this decision.

The FPM’s leader, Gebran Bassil, will almost assuredly reject these names as he has presidential ambitions himself, but if the Lebanese Forces agree, then the FPM’s support will not be needed to elect a president.

During their visit, officials from France, Germany, and Luxembourg questioned nine individuals, including current and former officials from the Central Bank.

Salameh, along with his brother Raja and several other associates, is being investigated in France, Germany, Luxembourg, Switzerland, Liechtenstein and Lebanon for allegedly laundering money belonging to the Central Bank.

The investigators are expected to return sometime next month.

Voiceless: Lebanon lost its voting rights at the United Nations on Friday, January 20, for not paying its dues.

This was the second time that Lebanon lost its voting rights at the UN since the start of the economic crisis.

Venezuela and South Sudan were some of the other countries that also lost their voting rights for the same issue.

Lebanon owes $1,835,303, with the government saying that they would pay what is owed.

A grim milestone: Lebanon, now in its fourth year of economic crisis, has reached yet another marker as the crisis continues to worsen.

The lira has reached a new all-time low and a grim milestone. It is now trading at 50,000 to $1. Without serious reforms, this will only worsen. #Lebanon #Dollar #لبنان #ليرة #دولار

Say their names: On Friday, January 20, the portraits depicting the victims of the August 4 Beirut Port explosion in downtown Beirut were removed.

This saw widespread anger from the victims’ families as well as from the Lebanese public at what they saw as an attempt by the government to force the country to forget about the 2020 explosion.

The portraits were originally put up by American street artist Brady Black in May 2021 ahead of the first anniversary of the explosion.

I spoke with Black as he was installing the portraits. You can read that story here.

You’re fired: Israeli Prime Minister Benjamin Netanyahu fired his joint interior and health minister, Aryeh Deri, after the country’s supreme court ruled that he could not serve in the government.

However, after his removal, Netanyahu stated that he would do whatever he could to ensure his return to the government. Deri also claimed that this would not stop him from serving the people who elected him.

This move could potentially topple Netanyahu’s newly formed government should the ultra-orthodox Shas party that Deri heads decide to remove its support from the government in response to Deri’s firing.

The far-right government is also working to pass legislation that would allow a basic majority in the Knesset, Israel’s legislative body, to overturn a supreme court decision, a move that critics argue would be a death knell in Israel’s democracy.

Some shots I took of the celebrations from around Basra after Iraq’s Gulf Cup win on Thursday #GulfCup2023 pic.twitter.com/5R6JVQ71pV

This was the first time that Iraq was able to host the Cup in over four decades, due to instability and violence in the country.

For Iraqis, this was a moment of celebration that was almost overshadowed by a deadly stampede earlier in the day that killed one.

The Gulf Cup is held every two years.

The EU takes a stand: The European Union on Thursday voted to designate the Iranian Revolutionary Guard Corps as a terrorist organization, a move that was condemned by Iran.

This decision by the EU came four months after the start of nationwide protests, to which the Iranian government responded with a brutal crackdown,   executing four protesters after what human rights organizations deemed as sham trials, and killing an unknowable number of people in the streets.

“If it wasn’t for the efforts of the IRGC, especially the Quds Force and martyr Soleimani, the terrorism volcano created by the Americans would have engulfed the Europeans and the security that prevails in Europe today would have been destroyed,” Hossein Salami, commander of the IRGC, stated following the vote.

The IRGC wields overwhelming influence in Iran, essentially acting as a state within a state, while supporting Iranian proxies throughout the region.

A deadly start: A Palestinian man who had allegedly tried to stab an Israeli was shot and killed outside of the Palestinian city of Ramallah on Saturday.

The man, identified as Tariq Maali, was claimed by the militant group Islamic Jihad following his death.

Tensions remain high in Palestine and Israel as more and more Palestinians are being killed amid an increasingly intense crackdown by Israeli authorities.

To the Gulf: On Wednesday, the United Arab Emirates played host to several regional leaders, including Qatar and Egypt.

There were scarce details of what was discussed at the meeting, but the fact that Qatari Emir Sheikh Tamim bin Hamid al-Thani and Egyptian President Abdel Fatah al-Sisi met shows that Qatar is being welcomed back into the Gulf fold, and that Egypt is increasingly turning to the Gulf rather than the West.

Collapse: 16 people were killed after a building in Aleppo collapsed early Sunday morning.

A child was among those killed after the five-story building in the Sheikh Maksoud neighborhood, an area controlled by the US-backed and Kurdish-led Syrian Democratic Forces. Four others were injured.

According to reports, the collapse was caused by water leakages that weakened the structure’s foundation.

Back into the fold: In recent years, Syria has been slowly normalizing relations with other countries in the region, something that could potentially help the country given its worsening economic situation. However, I found that for refugees in Lebanon, even as Bashar al-Assad is welcomed back into the Arab fold, their situation remains the same.

Going global: After the Lebanese dance group the Mayyas won America’s Got Talent last year, Lebanese at home and abroad celebrated their victory as a major triumph for the country.

Now, the Mayyas are back once more, but this time they performed alongside the American singer Beyoncé during a private performance in Dubai.

Along with Beyoncé wearing a dress by the Lebanese designer Nicolas Gebran and playing Ya Beirut by the beloved and legendary Lebanese singer Fairouz, this performance gave Lebanese a lot to celebrate.

Podcasts: Following his detention by security forces, William Noun, brother of the firefighter and Beirut Blast victim Joe Noun, spoke with Ronnie Chatah on the latest episode of the Beirut Banyan, where they discussed his detention, the ongoing protests by the families of the Beirut Blast victims, and Tarek Bitar’s investigation into the explosion.