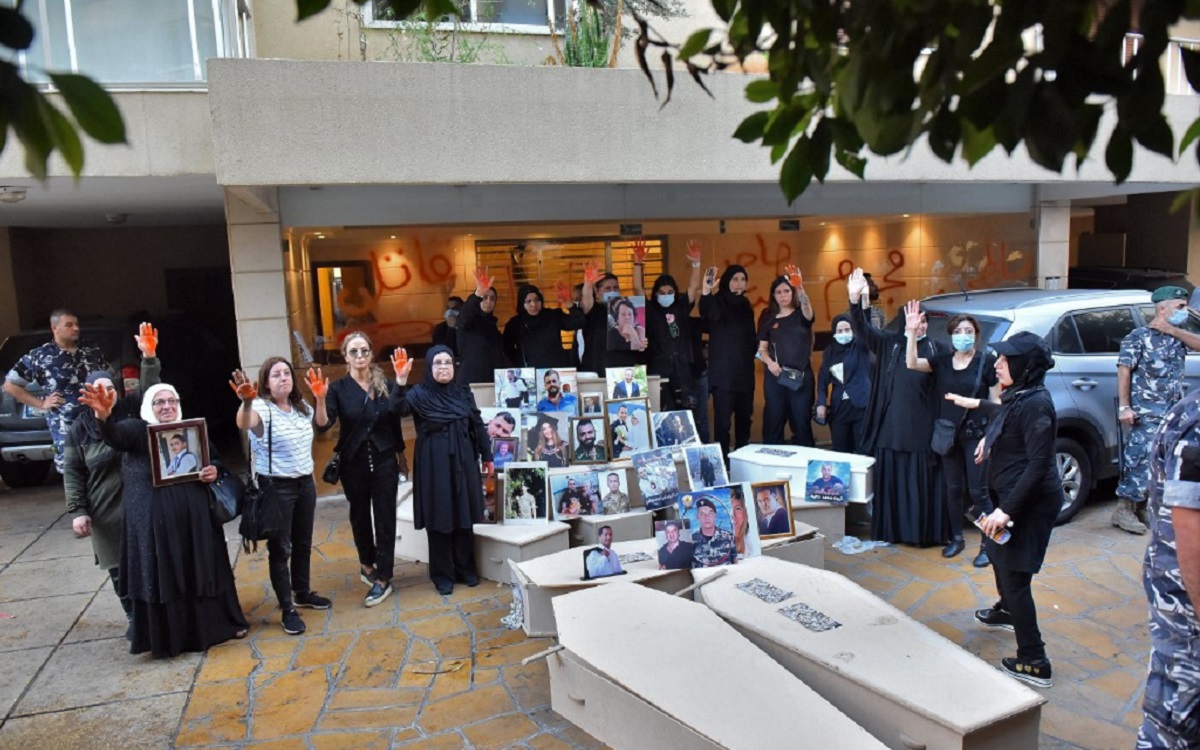 Demonstrators and families of the Beirut blast victims gather with empty coffins for a protest outside the residence of Lebanon's Interior Minister in the Qoraitem neighbourhood of western Beirut on July 13, 2021. Photo: AFP

Lebanon has become all about Hezbollah.

Regardless of how one labels the Party of God, the fact is that Lebanon has become about Hezbollah and its weapons.

As an exercise, try to classify political factions and political groups in the country. Pro-Western and anti-Western? Not really. Lebanese politics is not really oriented on postcolonial ideas, nor on emerging nationalist sentiments. It’s no longer even sectarian, with the new generations of activists less and less anchored in the sectarian mentality.

Politically, Lebanon currently seems to have two camps – pro-Hezbollah and anti-Hezbollah. The Shiite faction has become that super-political actor, a line that divides everything and everyone, the way Syria used to divide everything and everyone politically until 2011 when the war started. The Syrian hegemony kept Hezbollah in the line of political parties, but once the hegemon crumbled, the Party of God’s weapons made the difference.

Unfortunately, this division line may also reinforce Hezbollah as the dominant political actor in Lebanon, simply by making it this issue the big deal. And that is the danger: when it dominates the scene and the conversation, the rest of the political factions – be they old sectarian parties or new opposition groups – they all become secondary in importance.

Hello. This is your weekly round-up from NOW. It may not be all you need to read today, but it may help bring forth some aspects of our daily lives in Lebanon.

Lebanon is not about Hezbollah. Even what they call “Hezbollah’s stronghold”, Haret Hreik, was not about Hezbollah either.  But it became the “Hezbollah’s stronghold” after the 2006 war simply because Israel called it that way to justify the bombings. Rebuilding Haret Hreik gave the Party of God the opportunity to isolate its community by rebuilding the whole area the way it wanted. Not for the people, but top-down, the way it suited its political purposes. And no one was there to ask questions.

That has reinforced Hezbollah’s claim over its land, it has reinforced its claim that its weapons are legitimate and has made it lord and master over a territory the state has no control over. It shouldn’t dominate the narrative.

Open letter: The Beirut Banyan podcast host Ronnie Chatah wrote an open letter to US Ambassador Dorothy Shea and French Ambassador Anne Grillo after their visit to Saudi Arabia to discuss Lebanon’s future as political leaders in Beirut have been unable to let go of sectarian ambitions and form a cabinet.

But, in fact, the answer is that Hezbollah has to become an average political, just like the rest of them. Negotiate disarming Hezbollah with Tehran, and the whole Lebanon conflict would be transformed, Chatah says. Make Lebanon less about Hezbollah to give it a chance to solve the rest of its problems.

Soft power in crisis: The American University of Beirut, a hub of liberal ideas and one of the best education institutions in the region, if not in the world, may need to help to survive and keep producing men and women capable of leadership, writes Makram Rabah. He talks about Western soft power based on a culture of liberal ideas, human rights and freedoms, not foreign policy. The distinction needs to be made, as AUB itself has often been unjustly labeled as a promoter of US foreign policy.

Why the government is not happening: There are two currents of thought when it comes to explaining why political leaders in Lebanon cannot agree to form a government – one that it’s about Hezbollah, the other that it’s about corruption. But there’s room for both. You may want to read this piece that Nicholas Frakes put together in April to explain why it has always been so difficult to form a government in Lebanon and why the same factors make it almost impossible to have the same sectarian parties and leaders agree on a technocratic government.

The immunity affair continues: MPs from various factions are trying to find a way out of or delay lifting the immunity of three of their colleagues, Amal Movement’s Ali Hassan Khalil and Ghazi Zaiter as well as Future Movement’s Nohad el-Mashnouk. The head of the Beirut blast probe, Tarek al Bitar, requested their immunity be lifted two weeks ago in order to charge them with negligence and possibly even murder, and begin to investigate them. However, the Parliament Justice Committee requested Bitar provide all the evidence before immunity is lifted. It may sound like the right thing to do, but it’s not.

The legislative body should not control whether the justice system has evidence or not, but in countries where corruption is endemic, one hand washes the other. Also, being under investigation does not automatically make someone guilty. Nicholas Frakes discussed the immunity question with Heinrich Boll’s Anna Fleischer. Not lifting the MPs’ immunity may lead the public opinion towards the idea that “they have something to hide.” That is not only a political risk, it poses a security risk.

Enraged: Protesters stormed Minister of Interior Mohammad Fahmy’s house on Tuesday. They hold him accountable for not signing a permission for General Security head Abbas Ibrahim to be prosecuted in the Beirut Blast case.

There is more in rage than meets the eye: Grieving families seeking justice are still seeking peaceful protests, but there are some victims affected by the August 4 blast that increasingly think that they can only be heard if they resort to violence. Dana Hourany has the heartbreaking story. It’s not about incitement, but about a feeling of helplessness and futility.

These stories have drawn attention, some of which have directly resulted in legal action. More precisely, he was called for investigation 5 times in a year and a half.

Matt Kynaston spoke to him and other freedom of speech activists.

“It’s really bad, but I don’t share my frustration or anger or anxiety about this, because I don’t want them to think they are winning,” Gino told NOW. “But it’s disheartening, if not traumatizing.”

The other investigation: Lebanon opened a local probe into Central Bank governor Riad Salameh’s wealth in April, after the Swiss attorney general requested assistance in an investigation into more than $300 million which Salameh allegedly embezzled out of the central bank with the help of his brother. A charge Salameh has repeatedly denied. In August, prosecutor Jean Tannous will question Salameh on allegations of “embezzlement, forgery, illicit enrichment, money laundering and tax evasion,” a judicial source told AFP.

Lebanon+:  Sarde after Dinner hosted on Sunday night none other than Lebanese writer, director, actress and activist Nadine Labaki.  The recording can be found here. She charmingly talks about everything, from motherhood to protests.

We’re back to The Beirut Banyan and Ronnie Chatah, who hosted in-person historian Charles al-Hayek, who runs his popular “heritage and roots” Instagram channel.  For Episode 270 they start with the traditional storytellers of the Middle East (or anywhere for that matter) – his grandmother and everybody’s grandmothers. There is so much to learn in this interview with a passionate history instructor, in a country that avoids teaching its recent history in schools.

On Beyond Politics, Luna Safwan talked to Kim Ghattas, journalist and scholar, author of Black Wave: Saudi Arabia, Iran, and the Forty-Year Rivalry That Unraveled Culture, Religion, and Collective Memory in the Middle East.

Until next week, happy Eid al Adha and stay safe.