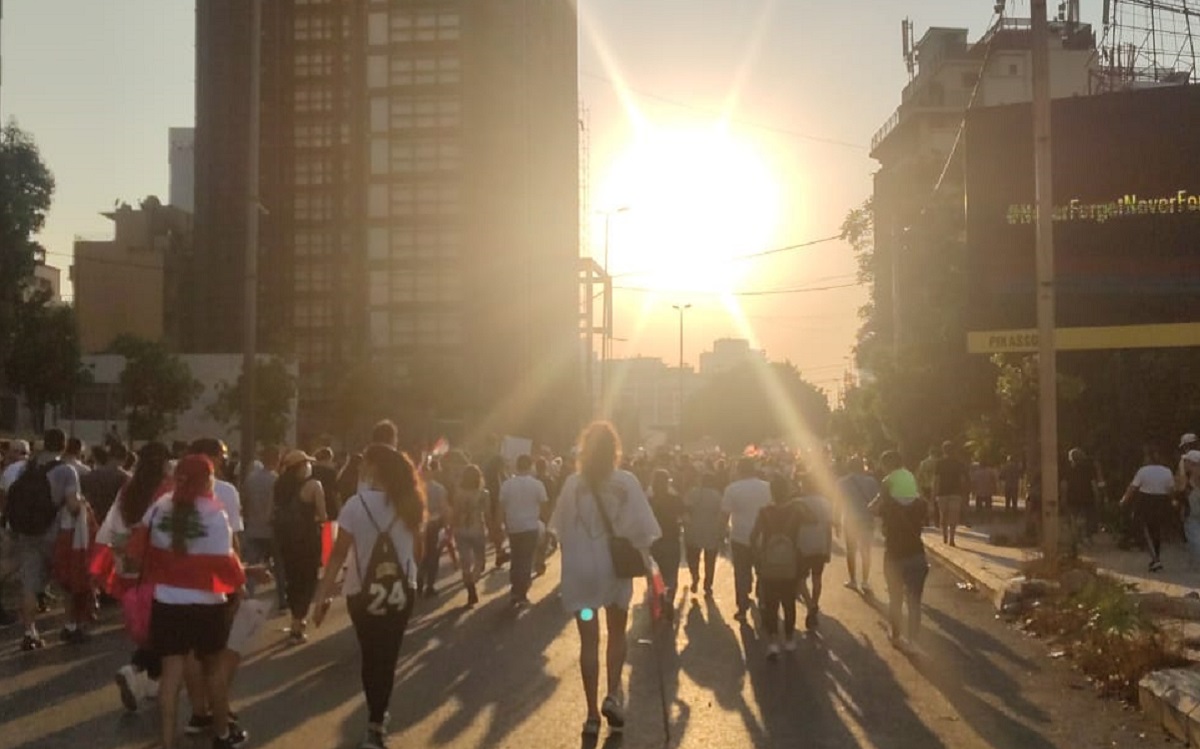 The long lines are back. Those lines you’ve all seen at gas stations. They’re back.

So are the shootings and the brawls. In Lebanon, where motorists wait for hours to fill their tanks, another three people died on Monday.

Going to the gas station involves knives, guns and even hand grenades. At least in some regions. But guns and knives and even grenades are not so out of the ordinary in Lebanon. Everyone has them, but “no one knows” how people get them.

The darkness also deepens. Sidon was in total darkness during the night from Sunday to Monday. Some residents protested. Not many however. We’re all getting used to grasping for oxygen at night.

Beirut, considered privileged, gets some 2 -4 hours of electricity per day. Neighborhood generators go out at night, from 2 am – 6 am. They go off again from 11 am – 1 pm and again from 5 pm- 7 pm. Yes, we learned the schedule of the power cuts like Pavlov’s dogs formed their conditional reflexes. Outside these privileged areas, power goes off for days and days, and only neighborhood private generators light up the houses. The streets remain forever dark.

We struggle to exchange a ton of LBP for 20 dollars and pay a friend of a friend for a much sought-after item: the mythical battery that lasts 5 hours. It’s meant to keep the internet on. Our guy who gets them from abroad was late with the delivery, they were stuck in the port for two weeks.

In a country where there is no other form of public transportation than cars and rundown buses, where all electricity plants run on diesel fuel, no fuel means everything is shutting down, including hospitals and schools.

Why is there no other public transportation available? Why are electricity plants in Lebanon still running on diesel fuel in the 21st century? Why are some able to drive around with guns and grenades?

Good questions. Questions that a functioning justice system with an anti-corruption division should have figured out long ago, alongside other uncomfortable yet vital questions such as why is Lebanon’s economy in shambles, where did the international aid Lebanon received over the years go, who has fattened their foreign accounts and who has built villas and bought private jets?

But petty corruption that wears down a country pales in the face of mass murder.

Hello. This is your weekly roundup from NOW. It may not be everything that you need to know, but it will at least catch you up on the disintegration of a state.

They knew: A Human Rights Watch Report that gathered over a hundred pieces of official correspondence between Lebanese government and security officials prior to the Beirut blast showed that many of them, including the Prime Minister’s office and the Presidency, knew about the dangers posed by the hundreds of tons of explosive ammonium nitrate stored in deplorable conditions in the Beirut port, less than a mile away from crowded residential areas.

None of the officials and institutions that were briefed and warned about the catastrophe that was about to happen though it was their business to move the cargo. Why? Was it sheer incompetence or was it more about who owned the cargo?

Regardless: “The evidence currently available also indicates that multiple Lebanese authorities were, at a minimum, criminally negligent under Lebanese law in their handling of the Rhosus’s cargo,” the report stressed.

“The actions and omissions of Lebanese authorities created an unreasonable risk to life. Under international human rights law, a state’s failure to act to prevent foreseeable risks to life is a violation of the right to life.”

In September, the UN Human Rights Council should discuss a request from the victims’  families and scores of Lebanese organizations to set up a fact-finding mission to investigate the Beirut blast outside the reach of the Lebanese government officials.

A dark anniversary: Thousands of protesters took to the streets to commemorate those lost and injured in the August 4 Beirut blast, as well as to demand justice and let out their anger at the lack of progress seen in the investigation into the explosion and the resistance by politicians to face any semblance of justice.

Matt Kynaston documented the day’s events and tells a story that could only be told through the power of photography.

Only when people overcome fear:  The Lebanese civil war hasn’t ended. Fear and mistrust is still there in the absence of any type of justice to heal war traumas. “Wounds must first heal. Violence must exit our politics. And all aspects of the civil war must come to an end,” wrote Ronnie Chatah, a day before the August 4 anniversary and the clashes.

A past that never healed: A group of protesters attacked an office of the Lebanese Forces political party with rocks and a Molotov cocktail in Gemmayzeh and were met with excessive force by some of the party supporters. Several protesters were beaten up and ended up in surgery, needing blood transfusions.

LF leader Samir Geagea claims that the party supporters were acting in self defence.

The incidents last Wednesday triggered a wide and wild debate over the definition of a militia. Some said the LF supporters were acting like the right-wing Christian militia that they were during the Lebanese civil war. Others said that they were hardly a militia, with no weapons or arsenal to sustain that claim and they were acting violently because there was a real militia, Hezbollah, around.

But there are more questions to be answered. Last Wednesday’s incident was not just about a Molotov cocktail and some rocks thrown at the Gemmayzeh headquarters. It’s about deeply rooted group and identity insecurities and a perception of being constantly under attack. People are constantly on the defence. These feelings have never gone away since the civil war.

What angers young party supporters so much that they react so violently at any provocation? What are the roots of their discontent? Why are they so ready to mobilize and defend their sacred values? Why do they perceive themselves to be under attack?

The answers may seem easy, but they are not easy neither to formulate, nor to accept.

Unsung heroes: Rami Kaaki never picked up the phone when his wife, Safaa called on August 4, 2020. The firefighter stationed in Karantina was not on emergency duty that day, but his squad was called to respond to a fire in the Beirut port. They were never told that they were heading to a place where hundreds of tons of ammonium nitrate were stored. Rami’s family found his body after a week. He left behind a little girl and a newborn little boy he’s never met. Sally Abou al Joud has the story.

Back to our memories of loved ones: Filmmaker Dana Hourany spoke with some of the victims’ families about how they remember those that they lost.

You can’t handle the truth: Political interference in Lebanon is nothing new.

Pressure and meddling in the port blast investigation hardly come as a surprise.

Pushing a rock up a hill: The family members of the victims of the Beirut port explosion have been shouting for over a year, trying to make their voices heard so that they would get a proper investigation and a fair trial for those responsible for their relatives’ deaths.

NOW’s editor Ana Maria Luca discusses the burden that these families carry to open the doors of justice for Lebanon. Their story is just beginning and it may take years of fighting and lobbying to achieve what the Mothers of Srebrenica have achieved in 16 years.

Along the same lines: “The victims of the port explosion were only the latest in a long line of victims, dating back to Lebanon’s fifteen-year-old civil war that began in April 1975.  No one was ever held accountable for the crimes committed during the conflict, which led to the death of some 150,000 people, according to certain estimates,” writes Carnegie’s Mohanad Hage Ali.

He also mentions that the few people who took their civil war cases to court were stalled for decades. Najat Hashisho, the wife of a communist high school teacher, took her husband’s case to court, identifying one of her neighbors as being among the militiamen who had abducted him. “Her court case, filed on January 23, 1991, failed to advance for over 22 years as court sessions were repeatedly delayed, unjustifiably, until she lost.”

War! What is it good for?:  As thousands mourned their dead in the Beirut port,  an unknown group fired several missiles into Israel from South Lebanon.

In response, Israel, for the first time in seven years, carried out airstrikes on Lebanese soil. No victims were reported, but the Israeli response triggered vegetation fired in Hasbaya region, South Lebanon.

Hezbollah responded to the airstrike by firing its own missiles into Israel.

Nicholas Frakes looks at what is going on at the border and how the conflict between Israel and Iran is acting as a catalyst for these recent events.

Not all for the Resistance: Tensions between members of the Druze community and Hezbollah came close to erupting into violence following a series of tit-for-tat incidents, after a mob of Druze villagers seized a Hezbollah missile-launching vehicle on Friday morning.

Incredible video of Lebanon Druze villagers stoping a Hezbollah rocket launch against Israel. People are tired and angry. No one wants war on behalf of Iran. #لبنان pic.twitter.com/0jVGxkyY2l

In footage that made the rounds on social media, a crowd of furious Druze villagers in Shwaya, Hasbaya region, can be seen stopping the launcher and detaining a Hezbollah member who was driving the vehicle. The Lebanese Army reportedly detained two Hezbollah members, but later released them.

The young man who released the video on social media was subjected to a cyberbullying campaign, which led to many Lebanese also showing support.

Lebanese Druze leader Walid Jumblatt, head of the Progressive Socialist Party said on Twitter that “after what happened in the south and in Shwaya in particular, we hope that we will all get out of this tense atmosphere through communication and self-control”.

New PM, same story: After Saad Hariri resigned as prime minister-designate, there was anticipation over whether Najib Mikati would be able to break the stall in forming a government.

Much to no one’s surprise, nothing has changed.

Two weeks into his designation, sources close to Mikati have said that talks have been stalled with President Michel Aoun over disagreements for four ministries.

Lebanon has been without a government for a year, the longest in the country’s history, adding to the growing list of crises that Lebanon is facing.

Probably the biggest thing on social media, outside of the worsening situation in Lebanon, is “lemon doubly”.

For those that do not know what a lemon doubly is, during a televised address on the anniversary of the August 4 explosion, President Michel Aoun fumbled reading the teleprompter saying “lemon doubly” rather than “lamentably”.

This quickly led to many people making jokes at the president’s expense.

However, one bar went the extra mile by offering a new “lemon doubly” cocktail to its customers.

Others on social media jokingly offered examples of how to make a lemon doubly cocktail.

When it comes to podcasts, most people are on vacation right now. That does not mean that there is nothing to listen to, though.

The Lebanese Politics Podcast came back for a surprise episode with Human Rights Watch’s Aya Majzoub to discuss the lengthy report published by the international organization.

The Beirut Banyan also published a haunting episode narrated by Mike Azar about his experience on August 4 following the explosion. It is a short episode, but it will stay with you long after it is over.

That is all for this week. Until next time, keep wearing your masks, enjoy your electricity while you can and stay safe.