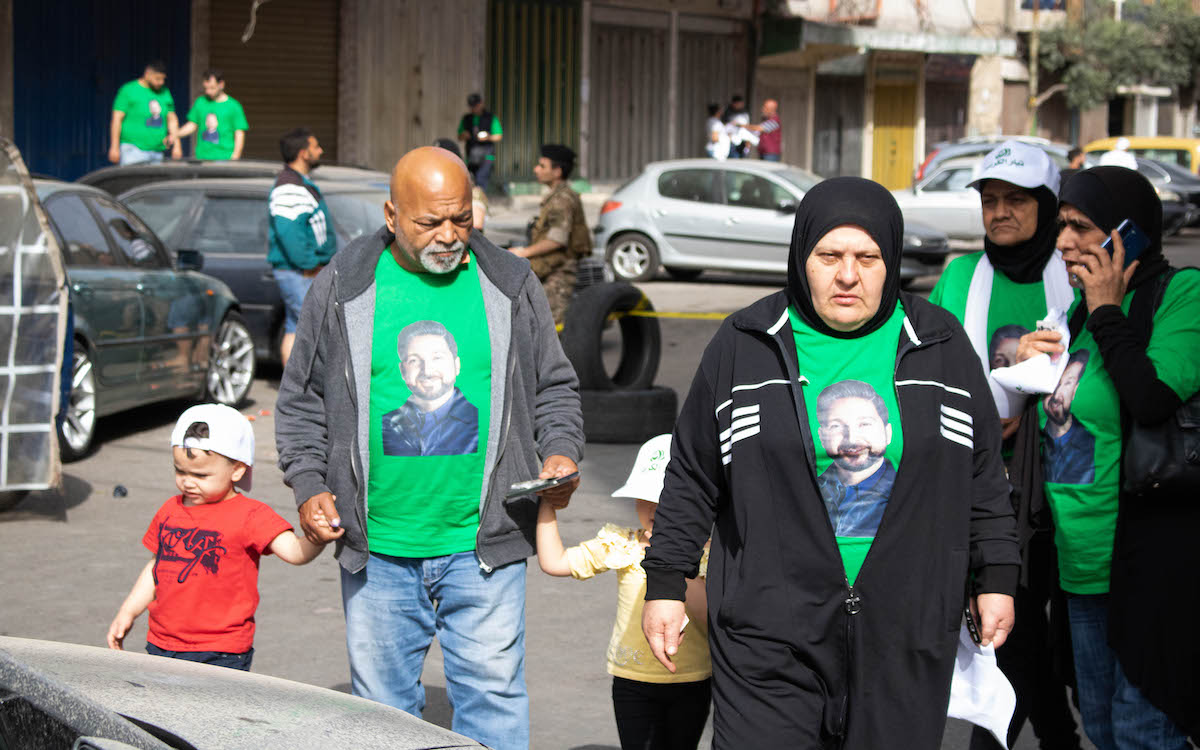 Last Thursday, November 24, Lebanon’s Constitutional Council announced a verdict on appeals made by candidates who lost in Lebanon’s May 15 parliamentary elections.

In Metn and Akkar, they found that the results were correct and there were no changes.

In Tripoli, however. that was not the case. The council annulled “change” MP Ramy Finge’s victory over longtime politician and Hezbollah ally Faisal Karame for a Sunni seat, and Firas Salloum’s win over Haydar Nasser for an Alawite seat.

The Council’s decision was a significant blow to the “change” MPs in Parliament and the opposition as a whole as it cuts into their disunified bloc and allows for Hezbollah’s bloc to inch closer to a basic majority.

Despite the impact that this has on the dynamics in Parliament, the MPs took it in stride, with “change” MP Marc Daou expressing solidarity with his colleague, and Salloum saying that he accepts the Council’s decision.

While Karame is clearly in the Hezbollah camp, when Nasser’s victory was announced, there was some hope that even though the “change” MPs lost one seat, the fact that Nasser ran on the same list as Finge could mean that a new “change” MP would be filling his shoes.

That notion was quickly put to rest when Nasser said that he is “with the weapons of the resistance (meaning Hezbollah’s armed wing) and against Israel,” signaling that even though he ran on the “change” list, he is not really aligned with them and their ideas.

Hezbollah only needs around two more seats for its bloc to hold a slim majority in Parliament and, with the Council possibly ruling on several more appeals this week, this is looking increasingly like a realistic possibility.

You guessed it: Parliament, for the seventh time, has failed to elect a new president as the country marks nearly one month without a head of state.

Little changed during this latest vote. The majority of ballots were blank and no candidate came close to having a basic parliamentary majority.

The presidential and governmental vacancies are definitely being felt in the economy, where the lira has devalued to, as of writing, 40,450 to $1 and is showing no signs of improving.

There is another vote scheduled for December 1, but, given that the politicians are merely talking about having discussions and how important it is to elect a new president quickly, rather than actually doing it, this eighth session is almost guaranteed to go in the direction of the previous ones.

Demanding action on sexual assault: Protesters gathered in front of Lebanon’s Parliament on Saturday to demand that MPs take action to ensure that perpetrators of sexual assault receive harsher sentences.

The day prior to the protest, the Abaad collective released a finding that said that six out of 10 women who are survivors of sexual abuse choose not to report it out of fear of damaging their families’ honor.

Experts have repeatedly pointed out flaws in Lebanon’s 2020 sexual assault and harassment law which can often deter survivors from reporting abuse.

Political interference has also played a significant role in allowing perpetrators to escape without charge, even when it comes to the sexual abuse of children, only facing any legal action if they commit abuses abroad.

Powering the country: France and the United States are looking at the possibility of speeding up the importation of gas and electricity from Egypt and Jordan to Lebanon. The implementation of the agreement, which was signed in June, has remained stalled.

The agreement, which France and the US helped to broker, has faced issues when it comes to Lebanon receiving funding from the World Bank for the project and the US issuing exemptions for Syria as any fuel and electricity would have to flow through Lebanon’s neighbor first, and who would also reap some of the benefits from the deal. Without a US exemption, the fuel and electricity being provided would be subject to sanctions under the Caesar Act.

It is unclear if talk of speeding up the process will actually lead to anything.

Currently, the Lebanese government provides only a few hours of electricity per day, forcing the country’s population to rely on expensive private generator subscriptions or invest in solar technology.

While speaking with the press, Assad said that Syria has “supported Hezbollah, we are still supporting it and we will continue to support it, because it is a strategic ally for us.”

After the start of the civil war in Syria, Hezbollah sent fighters to back the Assad regime.

Syria serves as a strategic gateway for Hezbollah to receive weapons and funding from Iran as well as a smuggling route to move things like fuel and medication that can be sold at a higher price in Lebanon’s neighbor.

World Cup celebrations: The majority of football fans in Lebanon support either Brazil or Germany, with the former receiving the most love.

That is why when Brazil won its first match in the 2022 World Cup against Serbia, the streets on Lebanon erupted in celebration.

Some even joked that the Lebanese celebrated Brazil’s win more than actual Brazilians. They probably are not that far off base.

Not all celebrations end well though. A Germany fan shot at a Brazil fan in Beddawi after the Brazil fan made fun of Germany for losing 2-1 against Japan.

Cholera update: Cholera cases in Lebanon are continuing to slow down with the Ministry of Public Health recording 601 confirmed cases, 3,803 suspected cases and 20 deaths.

Ironically, Ben Gvir was not allowed to serve in Israel’s military because his views were considered to be too extreme.

Ben Gvir has previously advocated on giving Israeli security forces more freedom to crack down on Palestinians and for them to face less severe punishments for killing Palestinians.

With Ben Gvir heading Israel’s national security, it will likely lead to the further repression of Palestinians as long as the far-right remains in power.

A glimmer of hope: Palestinians in Gaza have become hopeful that talks about developing a gas field off their coast could bring them some relief and investment after discussions had been stalled for years.

The $1.4 billion deal is set to be finalized in February 2023, with the possibility of production being launched as soon as 2024, and would see collaboration between, Egypt, the Palestinian Authority in Palestine, Hamas in Gaza, and Israel.

Interest in this project was partially spiked by the recent maritime border deal between Lebanon and Israel, as well as the increased demand for fuel sources outside of Russia following its invasion of neighboring Ukraine.

However, some in Gaza are skeptical that any profits will make it their way, expressing concern over corruption within the Palestinian Authority.

Turkey to invade Syrian Kurdistan: Turkey is reportedly planning a ground invasion into Kurdish territory in northern Syria after a bombing in Istanbul two weeks ago.

Turkish authorities have blamed the Kurdistan Workers Party (PKK) for the attack while the PKK and YPG have denied any involvement, saying that Turkey is using the bombing as an excuse to launch an invasion.

There has been talk about Turkey invading northern Syria for months as Erdogan looks to create a “buffer zone” that can be used to send Syrian refugees back to Syria. It is also viewed as being an election tactic ahead of the 2023 presidential election.

The Syrian Democratic Forces (SDF) have also said that they have halted operations against the so-called Islamic State in preparation for the Turkish invasion. It is also possible that the SDF is using its fight against ISIS as a way to pressure western governments to get Turkey to halt any invasion plans.

Jerusalem bombing: Two people were killed and over a dozen more were injured in twin bombings in Jerusalem on Wednesday, November 23.

This was the first bombing that the city has seen in around 20 years.

These bombings will also likely go to strengthen calls from the far-right for increased security with looser restrictions.

2022 is set to be the deadliest year for Palestinians on record.

Uniting the region: The Middle East is largely divided, with the various sides operating a shadow war to gain influence.

However, those differences and rivalries disappeared after Saudi Arabia defeated Argentina in its opening match in the World Cup 2-1.

Pro-Saudi, pro-Iran, and pro-Hezbollah Arabs alike all came together to celebrate the Kingdom’s unexpected triumph over Lionel Messi, who is widely considered to be the greatest footballer of all time.

However, Saudi Arabia lost in its following match against Poland 2-0, but one account had an explanation for that.

Saudi Arabia was so busy searching for Messi that they forgot about Lewandowski.

Lebanon’s culture in the crisis: Since the start of the economic crisis and with the coronavirus pandemic, Lebanon’s culture sector has taken a big hit. NOW’s Dana Hourany looked to find out if Lebanon still has its cultural spark.

Different degrees of feminism: Lebanon is no stranger to feminist activism, with  a wide variety of groups and individuals whose views on how to achieve gender equality in Lebanon differ. NOW’s Philippe Pernot spoke with several women who are involved in the fight for equality in Lebanon.

Lebanon’s kingmaker: Parliament has failed seven times to elect a president, with future attempts unlikely to be much different. I looked at how no matter who the next president will be, they have to appease Hezbollah and gain their support first.

Spies?: Security along the Lebanese-Israeli border is extremely tense, with anyone seemingly out of place or potentially working with Israel or Hezbollah falling under suspicion. The New York Times’s Raja Abdulrahim looked at the shepherds who are often detained by Israeli forces.

Podcasts: Artists and art fans, this episode of Sarde after dinner is for you. Médéa and Mouin spoke with Sultan Sooud al-Qassemi to discuss art and culture in the Arab world, Islamic influence on the Arab art scene, and Western perceptions of Arab art.