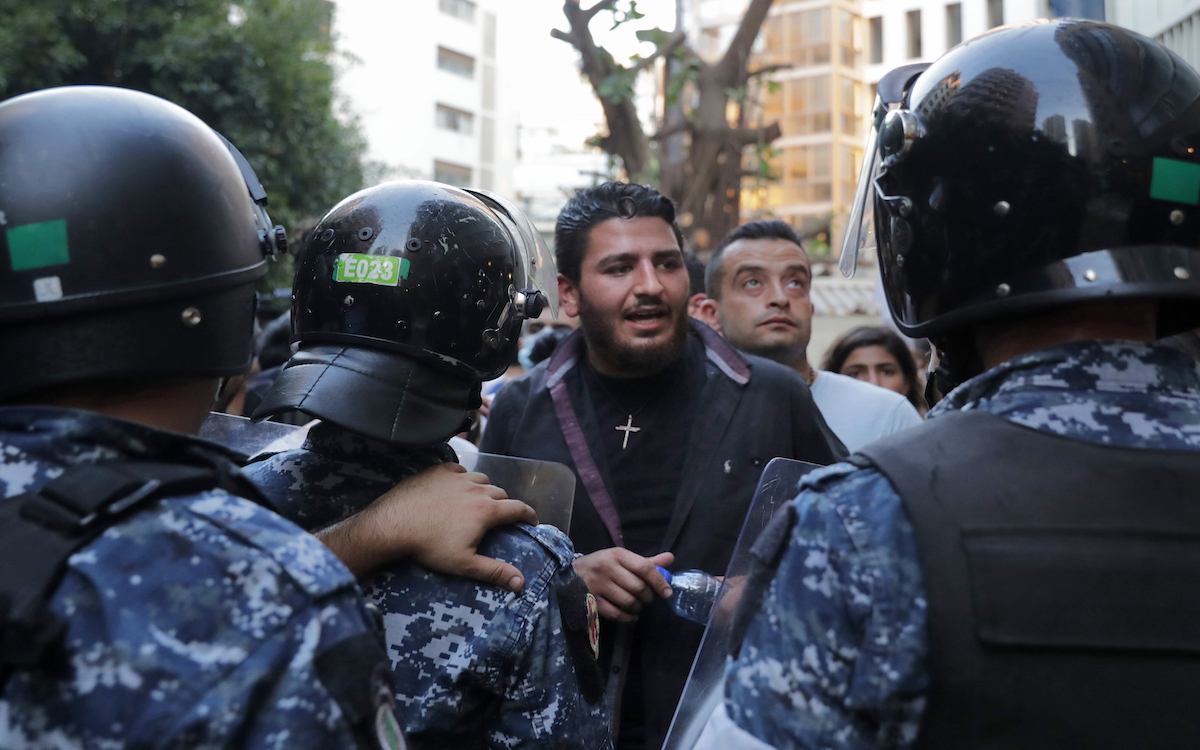 This file photo taken on July 13, 2021 shows Lebanese activist William Noun (C), whose brother was killed in the massive port explosion in Beirut in August 2020, during a demonstration outside the residence of the minister of interior in the Lebanese capital against the authorities' lack of action to achieve justice for the victims of the bombing. Noun -- whose brother, a fireman, was killed in the August 2020 Beirut port blast -- was arrested on January 13, 2023 over remarks made during a television program, a judiciary source told AFP. The young man is a leading figure among families of the blast's victims who have been calling for the continuation of a probe into the tragic event, on hold for over a year. Photo: Anwar Amro, AFP

It started with the economic crisis, when depositors’ money became trapped in the banks, making it impossible for them to access, even when they desperately needed it.

The politicians did nothing, and continue to do nothing, to bring this crisis to an end.

Then came the August 4 Beirut Port explosion, where 2,750 tons of improperly stored ammonium nitrate leveled half of Lebanon’s capital, killing over 200 people and injuring thousands more.

In the wake of the explosion, reports made it evident that politicians from multiple governments and on various levels knew about the ammonium nitrate that was being recklessly stored in the port, but kept kicking the can down the road and did nothing to remove it.

The investigation that followed continues to stall, as politicians repeatedly block the process and attempt to shut down the investigation, preventing the victims of the Beirut Blast from getting the justice that they deserve.

Now, as the families of the victims demonstrated outside of the Justice Palace in Beirut, the most recent injustice befell the Lebanese people.

William Noun, the brother of firefighter Joe Noun who was killed in the blast, was detained by security forces on Friday evening, only to be released the following afternoon.

Noun was not released before the streets of Beirut filled with protesters demanding his release, with demonstrators arguing that his arrest over comments where he said that the Justice Palace would blow up if there was not justice for the August 4 victims was trumped up and that this was all an intimidation tactic.

Indeed, it is hard to view this as anything but further attempts by the ruling class to silence the families of the Beirut Blast victims who have been the most vocal supporters of the investigation.

Without them continuing to demonstrate and call for justice, it is likely that the investigation would die quietly, becoming yet another crime committed against the Lebanese people that sees no accountability.

In the last four years, injustice upon injustice has been committed against the Lebanese people.

Noun’s detention is just the most recent and will likely not be the last, especially as more members of the families of the victims face interrogation by security forces today.

The investigators, coming from France, Germany and Luxembourg, are set to question Saad Andary, a former vice governor of the Central Bank, and Khalil Kassaf, a former employee at the banking control commission.

The investigators have requested to speak with Salameh, but, even if the request is ultimately approved, it is unlikely that Salameh would comply with any summons.

Salameh is also being investigated in Lebanon for financial misconduct.

Bringing the investigation to a close: The Special Tribunal for Lebanon, which investigated the 2005 assassination of former Prime Minister Rafik Hariri, had its mandate extended until the end of the year by United Nations Secretary-General Antonio Gutteres.

The extension is meant to allow the tribunal to complete non-judicial functions so that it can finally cease operations.

By the end of the appeals process last year, several Hezbollah operatives were found guilty of killing the former prime minister, 21 others and injuring 226.

None of those found guilty are expected to serve out their life sentences, as they are currently being harbored in Lebanon and Hezbollah is unlikely to turn them over.

Al-Husseini was the last speaker of parliament before Nabih Berri took the speaker’s gavel, which he continues to hold over 30 years later.

Most famously, al-Husseini is credited with helping to organize and back the Taif Agreement, which ultimately brought an end to the bloody 15-year civil war in Lebanon.

Al-Husseini remained involved in Lebanese politics in support of democracy, even after he left Parliament in 2008 where he expressed his disgust with how the politicians were treating the Constitution.

Continuing the trend: 2022 saw well over two dozen separate bank hold-ups where depositors, sometimes armed, went into their bank branches to demand access to their savings.

2023 appears to be no different, with depositors in Sidon and Nabatieh attempting to do the same on January 10.

Neither depositors who held up the banks were successful.

However, this is likely a sign of what is to come as the market rate for the lira nears 50,000 and inflation continues to rise, making the lives of ordinary Lebanese near impossible.

Turned away: A group of Syrian refugees who entered Lebanon illegally were sent back to Syria by the Lebanese Army on January 15.

The group was escorted through the western bridge in Wadi Khaled, where they were met by the Syrian Army.

Al-Jadeed: A group of Syrians was sent back to Syria by the Lebanese army after being arrested for attempting to cross into Lebanon illegally.

They were sent back across the western bridge in Wadi Khaled, Akkar, where Syrian security forces received them. pic.twitter.com/vlgrL4kmhO

Lebanon has been pushing for years to have Syrian refugees sent back to their home country, arguing that they were too much of a burden for the Lebanese state.

Since the start of the economic crisis, politicians have continued to argue that the refugees were the ones who caused the crisis.

Iran to the rescue: Last week, Iran’s foreign minister, Hossein Amir Abdollahian, visited Lebanon, during which he said that Tehran was ready to help Lebanon rebuild its power sector, even by constructing new powerplants if need be.

It is unclear if the Lebanese government will take up Tehran on their offer.

Lebanon’s power sector has been in shambles for years and is long overdue for an upgrade. However, the biggest problem facing the sector is a lack of fuel.

Iran has long attempted to use its soft power in Lebanon, often with the help of its proxy force Hezbollah, such as when Iran offered to send Lebanon fuel in 2021 and ultimately used Hezbollah to bypass the Lebanese government’s wishes to import the fuel anyway.

To the moon: At the end of last year, the Central Bank, once again, attempted to bring down the black market lira rate by raising the rate of its Sayrafa platform.

While the rate has since gone down to around 48,000, as of writing, this has not stopped many shops to start changing their prices to reflect a 50,000 LBP to $1 rate as it is practically only a matter of time before the lira surpasses this milestone.

Going on strike: Public school teachers in Lebanon announced that they were going on strike over the value of their dwindling salaries as the country’s economic crisis continues to worsen.

In response to the strike, the Ministry of Education cut afternoon classes for non-Lebanese students.

This has led to anger by the children of Lebanese parents who blame the donors, such as the UN, for funding Syrian students’ education at the expense of the Lebanese while the Syrians just want their children to be able to get an education.

Currently, the Ministry is working with donors to find a solution “that is ‘equal’ between Lebanese students and Syrian refugees, and at the same time treats teachers fairly.”

UK dual national executed: Iran announced the execution of Alireza Akbari, who served as a senior defense official in Iran and is a dual national with the UK, on Saturday.

Akbari was accused of being a spy for the UK, a charge that he strenuously denied.

Iran has a history of detaining dual nationals as a means of extracting concessions from the detainees’ home country.

Continuing the alliance: On Saturday, Syria renewed its economic arrangement with Iran, a sign that the alliance between the two countries is not going to come to an end any time soon.

Iran has been an important lifeline for Syria since the start of the civil war in 2011, providing fuel and lines of credit as well as military support through its proxy Hezbollah in an effort to keep Bashar al-Assad in power.

Syria is an important strategic ally for Iran, allowing them to send weapons and money to Hezbollah in Lebanon.

Both countries are under heavy sanctions by the United States, drastically limiting their options when it comes to economic allies.

Frenemies: Iranian Foreign Minister Hossein Amir Abdollahian told reporters in Beirut that Iran and Saudi Arabia are continuing their talks, and that they could once again restore relations.

Tehran and Riyadh are longtime regional rivals that often have competing interests.

The two broke ties in 2016 after Saudi Arabia executed a prominent Shiite cleric, for which Iranian protesters torched the Saudi embassy in Tehran.

Director talks were started in 2021, but have so far not reached any conclusive results.

However, its plans on overhauling the country’s judiciary, something that many have called a coup, seems to be one step too far.

Last week, there were several protests throughout Israel in opposition to the new government and its plans which saw tens of thousands of people pour into the streets.

Despite these protests, the government still plans on going ahead with its supposed “reforms.”

Bus accident in Iraq: As the Gulf Cup entered the semifinals today with a match between Iraq and Qatar, a bus carrying football fans to the match crashed, killing seven and injuring 30.

According to officials, the bus collided with a large truck in the Dhi Qar Governate in northern Basra.

The head of the Iraqi Football Federation, Adnan Darjal expressed his condolences following the accident.

Exchange rates: Many people have lost track of how many different exchange rates there are in Lebanon, but the one that keeps making headlines is the Central Bank’s Sayrafa platform. NOW’s Dana Hourany took a look at the platform and how it is not the savior that officials crack it up to be.

Night terrors: Last year was the deadliest on record for Palestinians since the Second Intifada which also saw almost daily raids by Israeli forces. The Associated Press’s Isabel Debre wrote about the nighttime raids and how they haunt Palestinian children and their families.

Podcasts: In these dark times, everyone can use a laugh. So Médéa and Mouin spoke with stand-up comedian Mohamed Helmy on the latest episode of Sarde after dinner where they discuss comedy in the Arab world and abroad, subculture in Egypt and traffic in Cairo.